The first Sunday in August is the designated day for the highlight of the Gower calendar – come rain or shine the great and the good will descend on Penrice Castle grounds for the Gower Show. This year was the 100th show and boy was it a good one. The weather left much to be desired, but even the un-seasonally chilly wind didn’t deter the crowds. 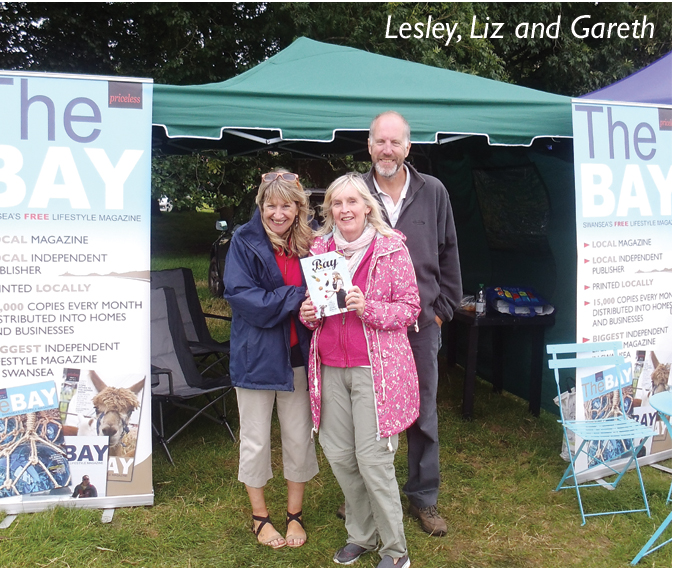 It was our 7th year of attending the show with the BAY stand – Simon our designer and illustrator, Liz Barry our photojournalist and her partner Gareth and I, a fact borne out by our banners that are illustrated with magazine fronts from 2010 – well they have proved to be value for money! Each year we take along 500 or so magazines to give away, but the real reason for standing in a field for the best part of nine hours is to meet our readers and advertisers. We catch up with old friends – some that we only meet at the show – and we have the opportunity to chat with people who receive the magazine through their letterboxes each month.

It really does give us a buzz to hear so many people saying how much they enjoy reading the BAY. At the end of the day we are quite exhausted and ready for dinner despite having indulged in goodies from the food tent. This year I decided that we’d go to the newly opened Gower Hotel.

After a much needed drink in Dylan’s Bar we headed into Monroe’s Restaurant named after the glamorous Marilyn – pictures of the iconic actress hang on the walls. The menu has lots of fish dishes on it – local mussels, Penclawdd clams, sea bream, salmon, cod and the king of fish – turbot.

Turbot is a left-eyed flat fish that wouldn’t win a fishy beauty contest – it lies on the bottom of the sea on its right side so therefore its eyes are on its left side. An early reference to turbot is in a poem by Juvenal who was around in Roman times where he speaks of it being a delicacy only available to Roman emperors.

Having worked up a healthy appetite we felt in need of a starter, and there are plenty to choose from.  The temperature on the show field had plummeted towards the end of the day, bringing with it a steady drizzle – so what better on a miserable August evening than a bowl of piping hot French onion soup. The deeply beefy broth was thick with onions and topped with a cheesy disc of toasted bread – I felt instantly comforted. I apologise now for the lack of photographic evidence but we were so hungry, we fell upon our food like black Labradors and it wasn’t until we’d demolished the best part of them that we remembered our plan. I understand from my companions that the liver pate and mushroom soup were equally satisfying.

For the main event I of course followed Caesar and ordered the turbot – if you favour fish such as Dover sole and plaice you have got to try the turbot. The fillets were thick and white, juicy and flaky. The Penclawdd clam chowder with samphire tasted of the sea and the clams in their shells were plump and tender. Simon and I often order two different dishes and then swap halfway through – not tonight though, I cleared the lot and would have happily continued my Labrador tendencies and licked the plate – but I was brought up properly. Simon in true carnivore mode ordered the slow roasted fillet of lamb with fried lamb sweetbreads and samphire. It’s funny how samphire pairs well with both fish and lamb – maybe it’s because some sheep graze on the salt marshes.

All the food not only tasted sublime, but was visually quite beautiful too. In the interests of market research we shared a chocolate choux buns with warm chocolate ganache and Chantilly cream, which to ignoramuses like me are known as profiteroles. Whatever they were called they were pretty darned good.

Whatever your previous experiences of the Gower Hotel have been, I can assure you that the new broom has swept clean and the house is well and truly in order. All the members of staff are very welcoming and their attention to detail is refreshing. While we were there, a party of diners had an accident with a bottle of wine – they were quickly transferred to the bar while the staff completely stripped the table and relayed it with fresh table linen and tableware. The diners were re-seated and their evening continued. That’s a sign of good staff training – being able to cope when the unexpected happens.

I remember as a child, passing the Adam & Eve pub as I walked up Swansea High Street heading to the railway station where my dad worked. The pub sign was of the naked duo with strategically placed snake and fig leaves – you see far more flesh in the High Street on a Friday night now. After being closed since 2010, the pub has now reopened as a pop-up venture announcing itself as ‘A Good Old Fashioned Contemporary Boozer’. Craft beers and cocktails are the order of the day, and whilst I didn’t eat there, the food on offer looked good – not your usual pub grub. A group of girls were demolishing a huge plate of loaded fries – I’d have happily joined them. Since cocktails were on offer, I availed myself of a Margarita –  normally I restrict drinking these to when I am on a sunny beach – but since that’s not going to happen any time soon, I made an exception. I love the simplicity of a Margarita – just four ingredients – tequila, triple sec, lime juice and the all-important salty crust around the top of the glass. A straw is an unnecessary accompaniment – how can you drink it through the salt if you use a straw? It’s great to see the High Street finally getting the regeneration it so needed. With the arrival of Galerie Simpson, The Hyst and Volcano Theatre, people arriving by train can now see Swansea’s creative side.

I popped into Rag & Bone at the top of West Cross Lane the other day, and discovered that it is the place to meet friends at the moment. On a weekday lunchtime it was packed with families and workers – all tucking into some proper food.

I was discussing Rag & Bone with our editorial consultant Sarla Langdon who had also been in for lunch. “Darling” she said with the authorative tone that only she has. “Did you know that Rag & Bone is cockney rhyming slang for telephone?” When I stopped laughing I put her right – Dog and Bone – it’s not often that I’m right and she’s wrong so please let me have my moment.

One thing on which we were agreed, was that was that the food was good. Simon wanted man-food and was perfectly satisfied with his bacon roll – a proper bread roll – not a pappy burger bun – stuffed to the gunwales with succulent slices of bacon. I on the other hand wanted something a little more refined, and this came in the shape of a Garden Club – a sandwich packed with the fruit of the moment – avocado, salad, hummus and sweet chilli.

Avocados certainly have become more popular of late – maybe because of the increase in veganism and the fact that an avocado has a good mouth-feel.

It’s funny how the avocado has become a staple in our weekly shopping, when just 40 years or so ago they were considered exotic. As recently as 2009, Sainsbury’s and M&S were arguing as to who stocked them first – it was Sainsbury’s in 1962 – it’s bound to come up in a pub quiz at some time.

Avocados first came to Britain in the late 17th century but it was in the early 20th century that they served at dinner parties of the wealthy, as culinary curiosities. After post war rationing was over, they began to appear in specialist food shops but it wasn’t until the 60s that they became readily available. They were the staple of the 70s dinner party – often filled with prawn cocktail and served in special avocado shaped dishes.

Today they are available not only from the vegetable counter of every supermarket, but also in the frozen food section of Tesco. They freeze remarkably well and are perfect for whipping up an impromptu bowl of guacamole or mashing onto bruschetta a la Nigella Lawson.

If you want to test to see if you are buying a perfectly ripe avocado here’s a simple tip. Pull out the stalk – if the space where the stalk was, is green it’s perfect to eat – if it’s brown it’s already gone over. If you can’t easily remove the stalk – it’s not ripe.

Anyway, back to the Rag & Bone. My club sandwich was perfect and judging by the contented look on Simon’s face and the empty plate, the bacon roll was too.

Apparently the name comes from the fact that owner Jamie, sourced most of his materials for the café from stuff that was destined to be scrapped –old pallets etc. The result is great – a comfortable space to relax in –  friendly staff and the coffee is excellent too.