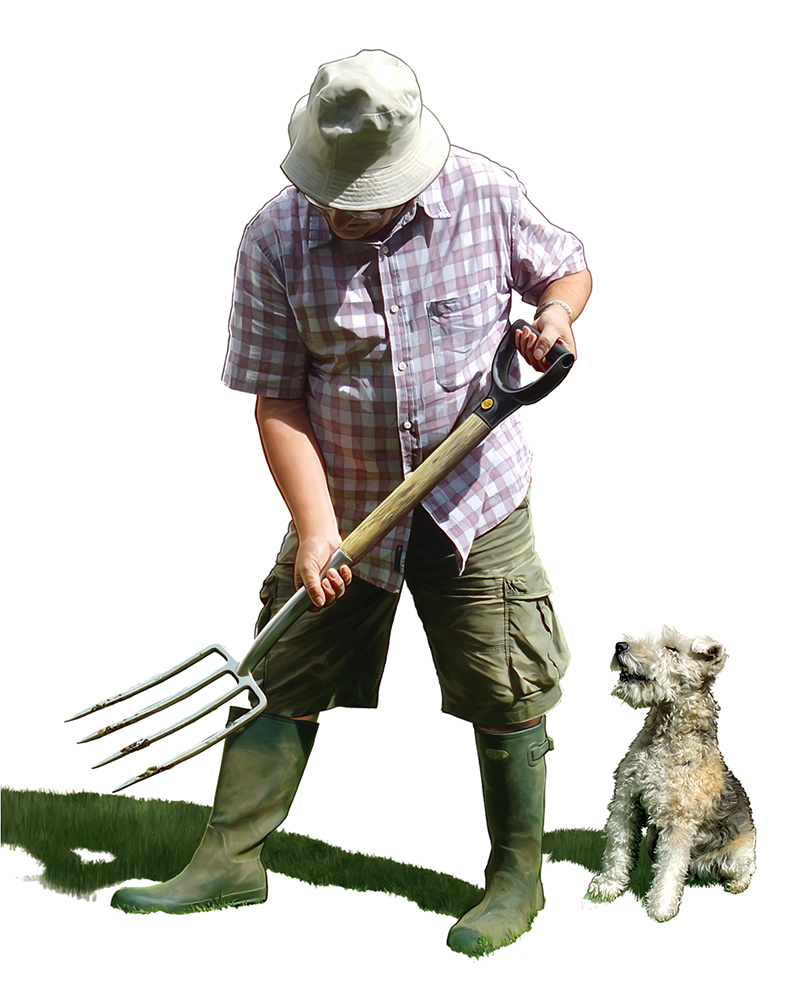 Throughout 2017 the Bay’s front covers feature one of our contributors, each cover illustrated by our in-house designer/illustrator Simon Williams. This month it’s the turn of our gardening expert and international man of mystery Fulke Andel.

Fulke Andel was born in Morriston and has lived in the Swansea area for all bar a few years of his life, when he followed the money and went North. Born in the late 50s, his earliest ‘gardening memories’ are of picking Broad Beans in his father’s vegetable garden at the tender age of 4. His interest in gardening started a few years later, following his father’s debilitating second heart attack. In short, if he wanted to play football, he had to cut the grass himself! So from early years, battling with a ‘Victor Corvette 2’ Lawn mower, he progressed into growing flowers and then vegetables. His first greenhouse was bought at the age of 14, with the proceeds of his paper round. However, he recalls the severe disappointment he felt, when his first crop of tomatoes were ruined by tomato mosaic virus. When pressed about his favourites, he lists Night Scented Stock, Sweet Peas, Roses and Honeysuckles – but in all honesty, anything with a good scent! As for vegetables; Runner Beans, Broad Beans, Carrots and Spinach – their taste when freshly picked from the garden, is second to none. Gardeners who have influenced him include his Aunt – who grew the most amazing roses, Percy Thrower one of the first presenters of Gardener’s World and the current presenter Monty Don. Having met Terry Walton, Fulke was taken by his enthusiasm and the way in which engages with the public – something he aspires to do himself. Fulke now lives in Gower with his wife Mrs Andel, and their Fox Terrier, Lillabelus Maximus.

Well August was a bit of a wash-out, with so much warmth and moisture in the air, it was no surprise to see a lot of plants (both veg and flowers) fall foul of the dreaded white mildew. September however, is the month you should be busy reaping the rewards of your harvest in the veg. and fruit garden. There’s not much to do in the flower garden, other than dead-heading and weeding. I is time though, to get out and start planting spring-flowering bulbs for next year. Make the most of the remaining warmth while you can!

I know that almost every Seed and Bulb producer provides on-line catalogues these days, but there’s nothing quite as good as pouring over a paper copy of a catalogue during the autumn and planning next year’s flower and vegetable garden. This is also that time of year when gardeners look back and review their successes and failures. They then look forward to next year, and wonder what challenges the weather will throw at them.

Don’t be tempted to neglect hanging basket maintenance – a little deadheading, watering and feeding can keep them going until mid-autumn. Once they are past their best, re-plant as winter/spring hanging baskets with spring-flowering bulbs, winter heathers, trailing ivies and spring-flowering plants such as dwarf Wallflowers.

Continue to deadhead plants such as Dahlia, Delphinium, Rosa andPenstemon to prolong the display and give colour well into the month.

Now is a good time to divide any overgrown or tired looking clumps of alpines and herbaceous perennials such as crocosmias. This will invigorate them, and improve flowering and overall shape, for next year.

Take cuttings of tender perennials, such as Pelargonium and Osteospermum. These plants often do better grown from new cuttings each year. If you do not have a greenhouse, then use a light windowsill to grow them on.

Bring inside any tender perennials, such as Fuchsia, Gazania, Lantana andAbutilon, before frosts cause damage. Wait for the first frosts to hit dahlias and cannas before lifting the tubers or rhizomes. 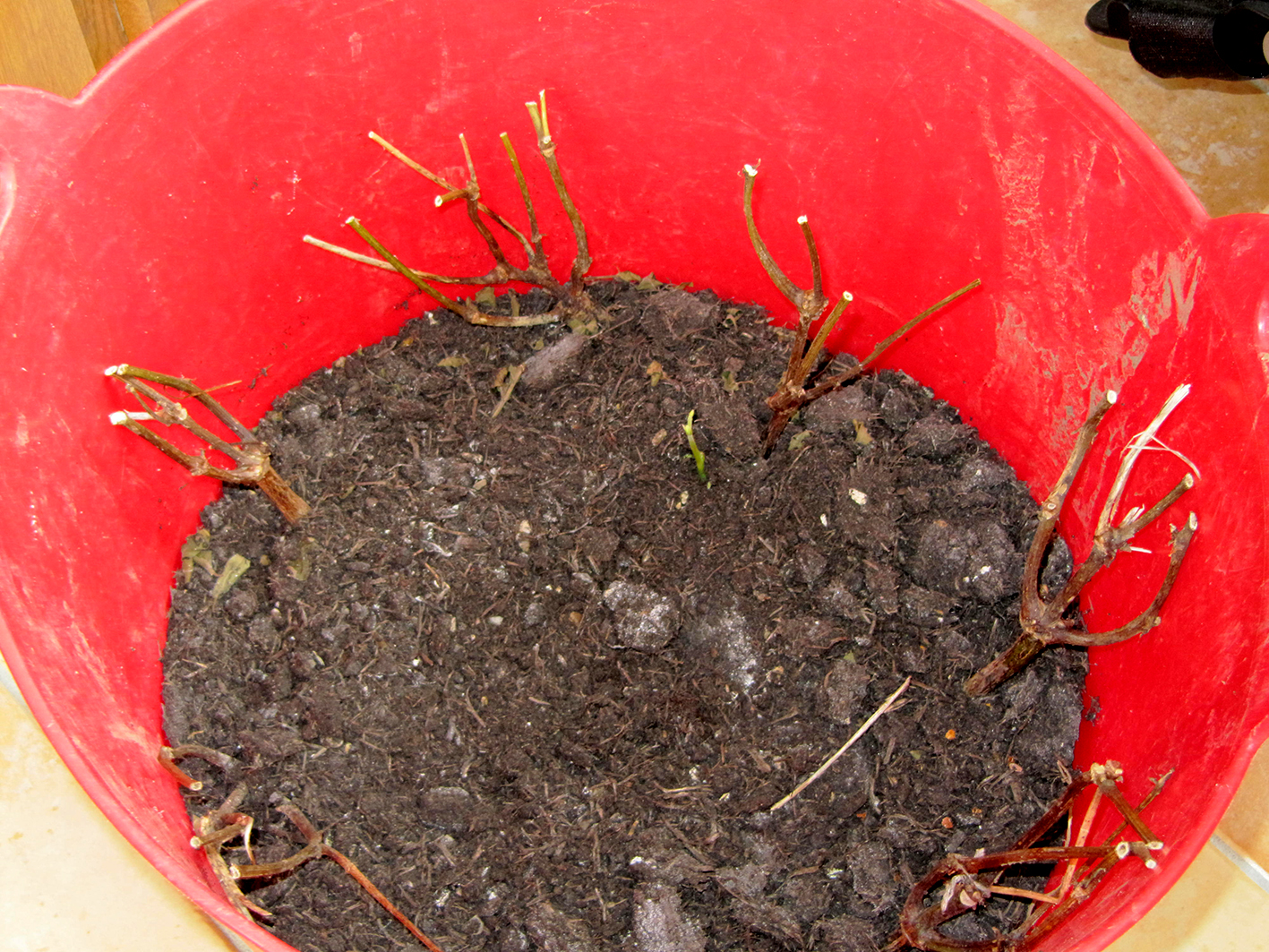 A top tip for the end of the month, when your runner beans have finished is to lift half a dozen of your strongest plants, cut off all growth bar 6 inches, place them in a trug and cover with moist compost. Place them somewhere dark and dry to overwinter (see picture). Come the spring, water them a little and plant them out once they start sprouting (protecting from frost). They will shoot up the poles and produce beans weeks before plants grown from seed.

Jobs for the Month of September

Depending on how your crops are maturing, you could be harvesting:-

Tidy up cultivated Blackberries: Cut off the stems that have borne fruit and tie in the new stems that will bear next year’s fruit. This also applies to summer fruiting Raspberries

Strawberries also need attention: Cut off the foliage about 1″ from the ground, clearing and weeding as you go. Any runners can be planted up to replace 3 year old plants that are best replaced now.

If you have a glut of tomatoes, here’s a recipe for a simple and versatile roast tomato sauce:

You’ll need around 1.5kg of ripe tomatoes, 3 cloves of garlic, some sprigs of fresh thyme and marjoram and around 2 tablespoons of olive oil. Preheat your oven to 180 degree C. Put the tomatoes on a backing tray, cutting any large ones in half. Scatter the herbs and garlic over them and trickle with oil. Season with plenty of salt and pepper. Roast them for around an hour until they’re soft and slightly caramelised. Remove from the oven and allow to cool. Tip them into a sieve and push them through using a wooden spoon. Discard the skins and pips. This sauce can be used to accompany pasta, or use it just as you would tomato ketchup!

If blight has struck your potatoes the best method to preserve the crop is to remove the stems and burn them. Leave the potatoes in the ground for a fortnight or longer to stop the spores getting onto the tubers.