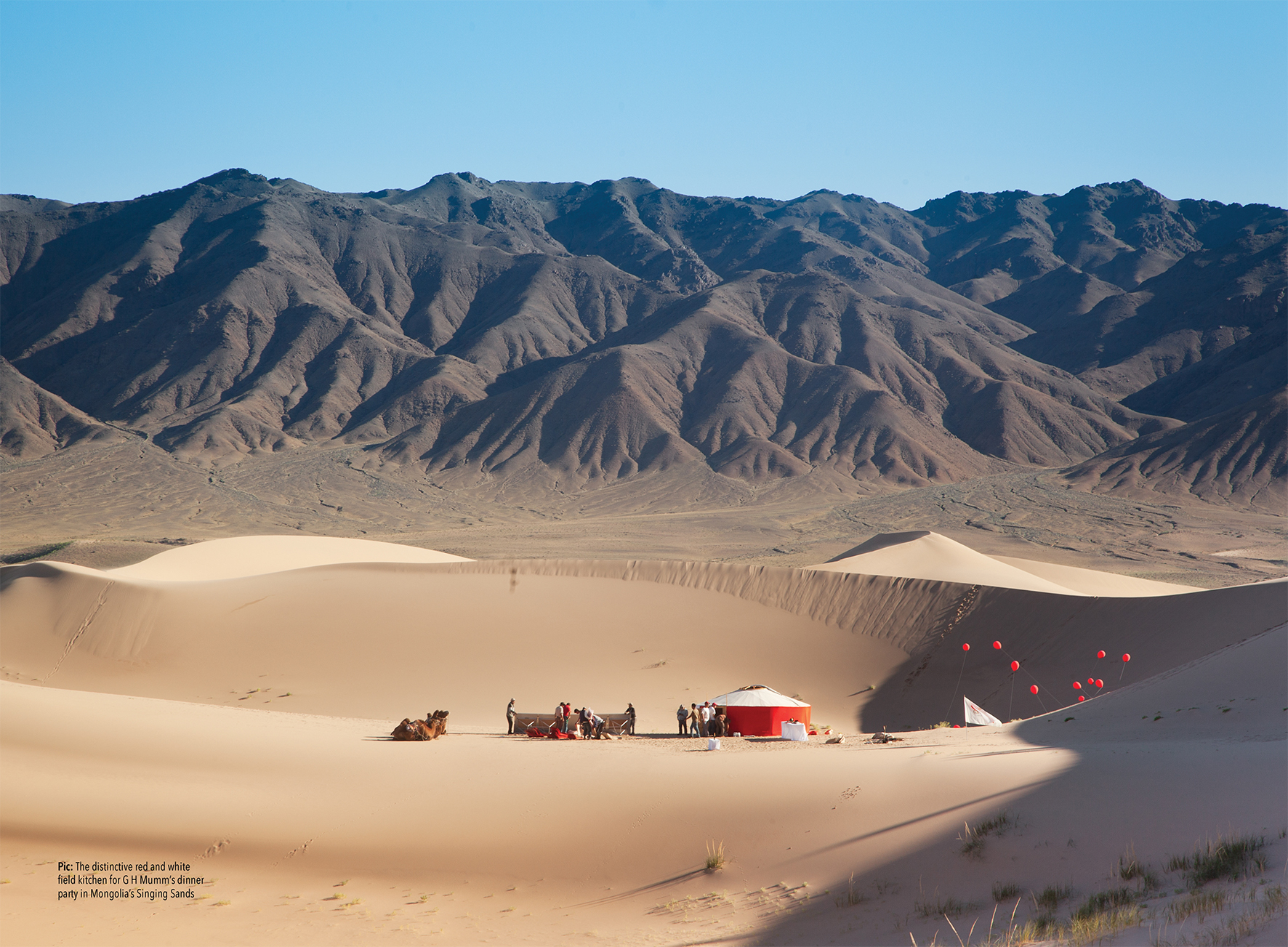 For most of us Mongolia is one of those places – such as Timbuktu or Zanzibar – that exists simply as a benchmark for somewhere extremely far away, exotic or virtually impossible to get to. But, as Bay’s Nick Smith found out, Mongolia is a very real wilderness of empty desert, nomadic peoples and camels. It’s also where champagne maker G H Mumm decided to hold a dinner party. Why not?

As a travel writer you’re never quite sure what’s going to happen next. You can go for months without the phone ringing – in which case you just get on with your regular deskwork – or you can pick up the instrument to hear that an adventure magazine in New York wants you to interview a Swiss explorer in Mongolia.

I gave up years ago wondering if editors were mad or joking when such assignments crop up. But with this one, I was definitely of the opinion that somebody, somewhere was pulling my leg. Apart from the fact that they weren’t.

Over the next few days, as the details of the adventure became clearer, my life turned into a flurry of paperwork that included securing an entry visa for Mongolia, which isn’t as simple as it sounds. In what felt like something out of a James Bond movie, I was issued instructions to meet my host in Moscow, from where we would fly first class to Mongolia’s capital Ulaanbaatar, where I would await further instructions. First class on Aeroflot isn’t anything to write home about. Everything you have heard about the Russian airline is true. Travelling in the best seat they had was barely better than being strapped to the wing with a pair of goggles and a cup of cold coffee. But, I told myself, all luxury is vanity and the only thing that counted in the here and now was the adventure. 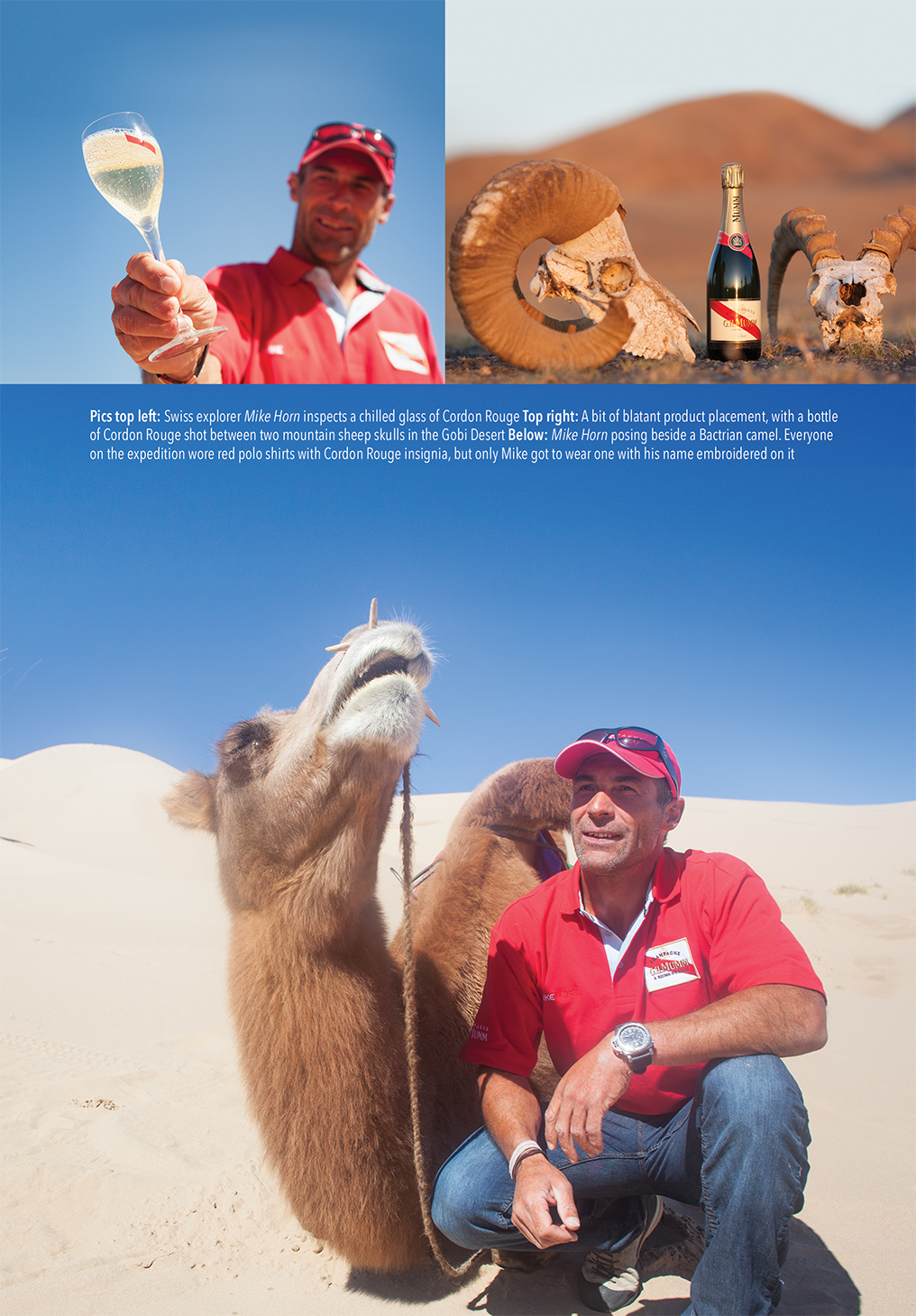 Back to Moscow and my host was the champagne house G H Mumm that was launching a mini-expedition to the Singing Sands, deep in Mongolia’s Gobi Desert. Ever since the early 20th century, when in 1905 Jean-Baptiste Charcot became the first French man to set foot on continental Antarctica, Mumm has had a tradition of supporting exploration. Following in that tradition Mumm was currently sponsoring explorer Mike Horn’s Pangaea Expedition.  This was his four-year challenge to cross all seven continents without using motorised transport. At the mid-point of each leg, Horn would hold a press conference where he would present his message to the planet. Feeding the journalists involved flying in a chef: in this case Alain Passard, owner of the three-Michelin starred restaurant in Paris, L’Arpège, which in 2011 was voted the 19th best restaurant in the world. All of which hopefully meant that Passard was going to serve something a bit more interesting than Aeroflot had. Naturally enough, all this was to be sloshed down with champagne from our host, G H Mumm.

If this sounds to you a little bit far-fetched, over-indulgent and, I don’t know, bordering on the insane, then let me reassure you we are of one mind. Before leaving Heathrow, I couldn’t have imagined any circumstances under which anyone would fly to one of the most remote corners of the world to have lunch with an explorer. Welcome to the glitzy world of champagne marketing, where everything is designed to be – to use their words – unique and audacious. Which is just how the house of G H Mumm would like us to think of their wine.

INTO THE LAND OF GENGHIS KHAN

As much as I like champagne, and as grateful as I am for the insight into the surreal world of luxury brand market-ing, the real gig was simply going to Mongolia. For me, this is the land of the great and bloody Genghis Khan, the mythic realm once known as Outer Mongolia. The name itself is one of those antiquated bywords – just like Timbuktu or Zanzibar – for anywhere ridiculously far away or difficult to get to. “You might as well go to Outer Mongolia,” people used to say. But it’s not just far-flung. It’s empty and wild. For the record, Mongolia is 75 times the size of Wales, while having a smaller population of just less than 3 million, half of which live in the country’s capital, Ulaanbaatar. As you fly into Chinggis Khaan International Airport (you’re not allowed to call Genghis Khan ‘Genghis Khan’ any more because it upsets the politically correct brigade) there is a great dome of yellowish air pollution created by coal-fired power stations and the cooking stoves of the ‘ger’ district (a ‘ger’ is the Mongolian equivalent of a ‘yurt’ or round tent, and means ‘home’ in Mongolian.) 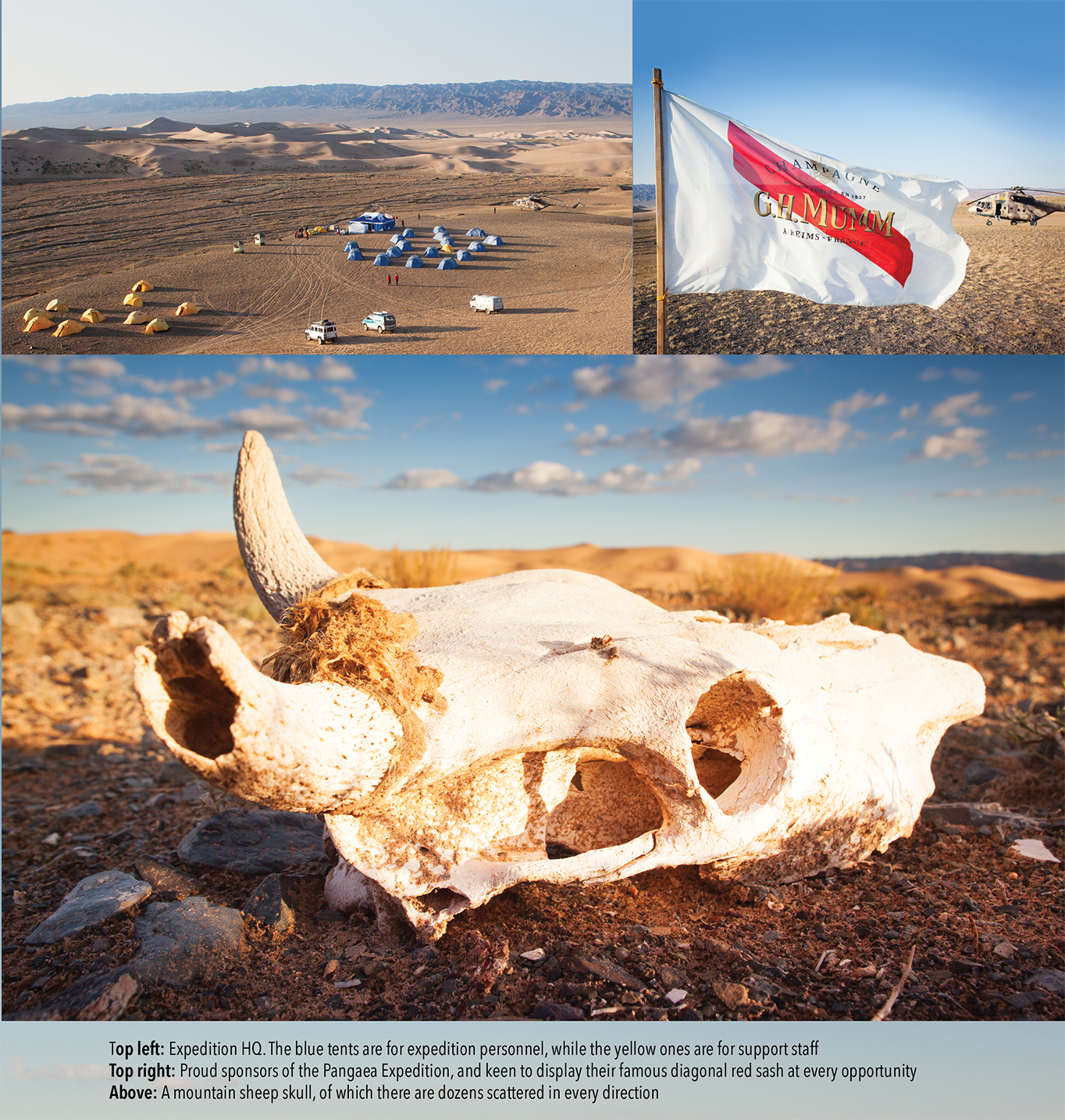 I stayed overnight in Ulaanbaatar at a Ramada hotel that looked and felt like something out of Soviet Russia, where the lifts didn’t work, the windows had rusty metal frames and the carpets smelled as though they’d been damp for decades. The food was American-style junk, but there was plenty of champagne. As we waited for the rest of the expedition team to arrive, I took a stroll around Chinggis Square, where there is an imposing statue of Damdin Sükhbaatar, one of the leaders of Mongolia’s 1921 revolution. But before long it was time to head for the desert in a bumpy old Mongolian Air Force transport helicopter reeking of aviation fuel, a Russian Mi-171E that wasn’t so different from the Aeroflot plane. 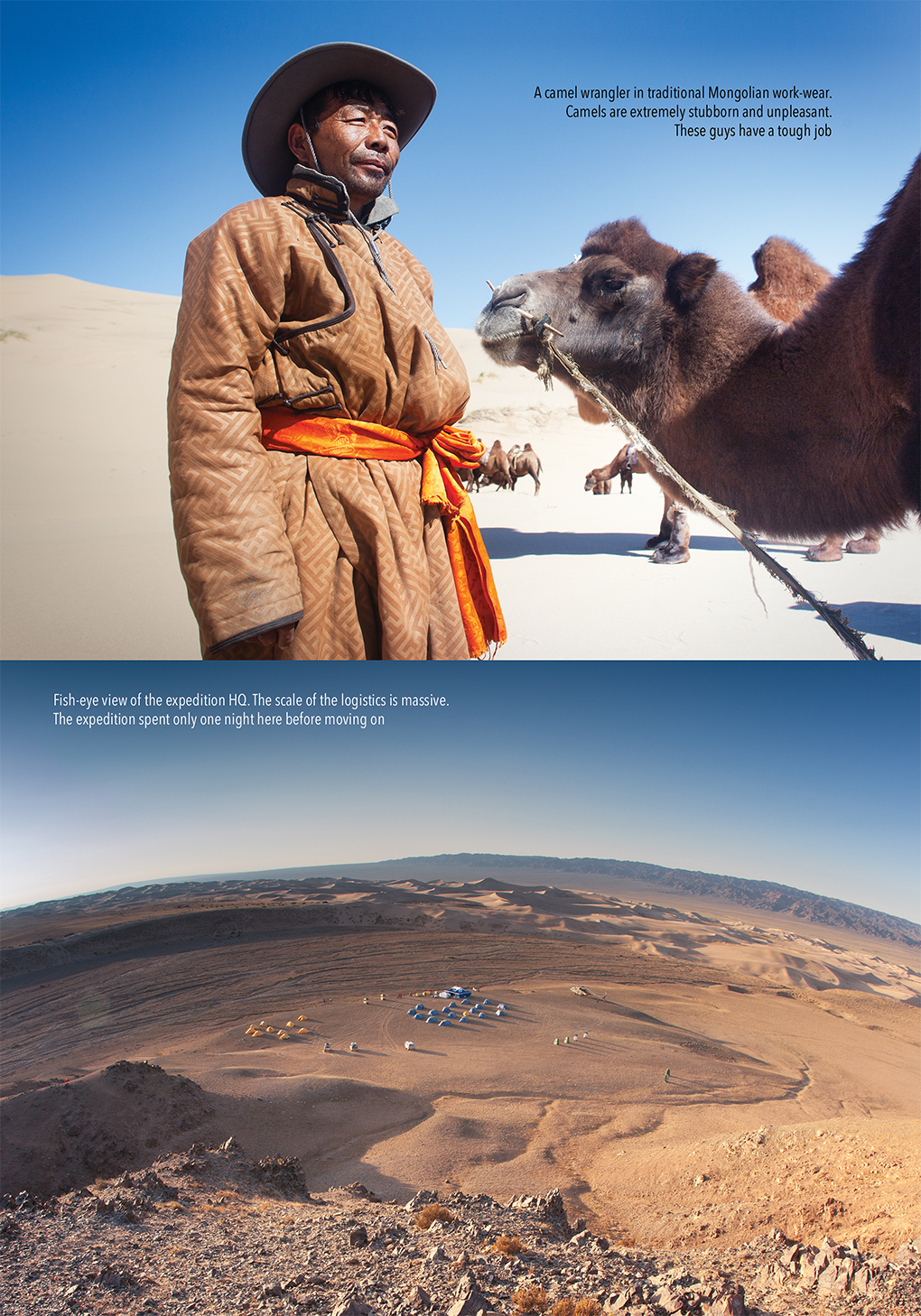 We flew west in the battered old eggbeater for four hours, after which it was a dusty relief to land in the middle of nowhere. I still have no precise fix on the location, other than the knowl-edge that we were in an area of the Gobi Desert known as Khongoryn Els, or the ‘Singing Sands’. The informal name comes from the sound made by sand-avalanches as the enormous dunes are blown along their path across the desert. I’ve heard it described as being similar to the noise of a jet aircraft taking off only quieter. But I thought it sounded like the sea.
Our expedition base was impressive: a small temporary city of modern tents, a larger mess tent and a support team of local camel wranglers who were to supply our transport for the following day. It was here that I met Mike Horn whose achievements as a modern adventurer are 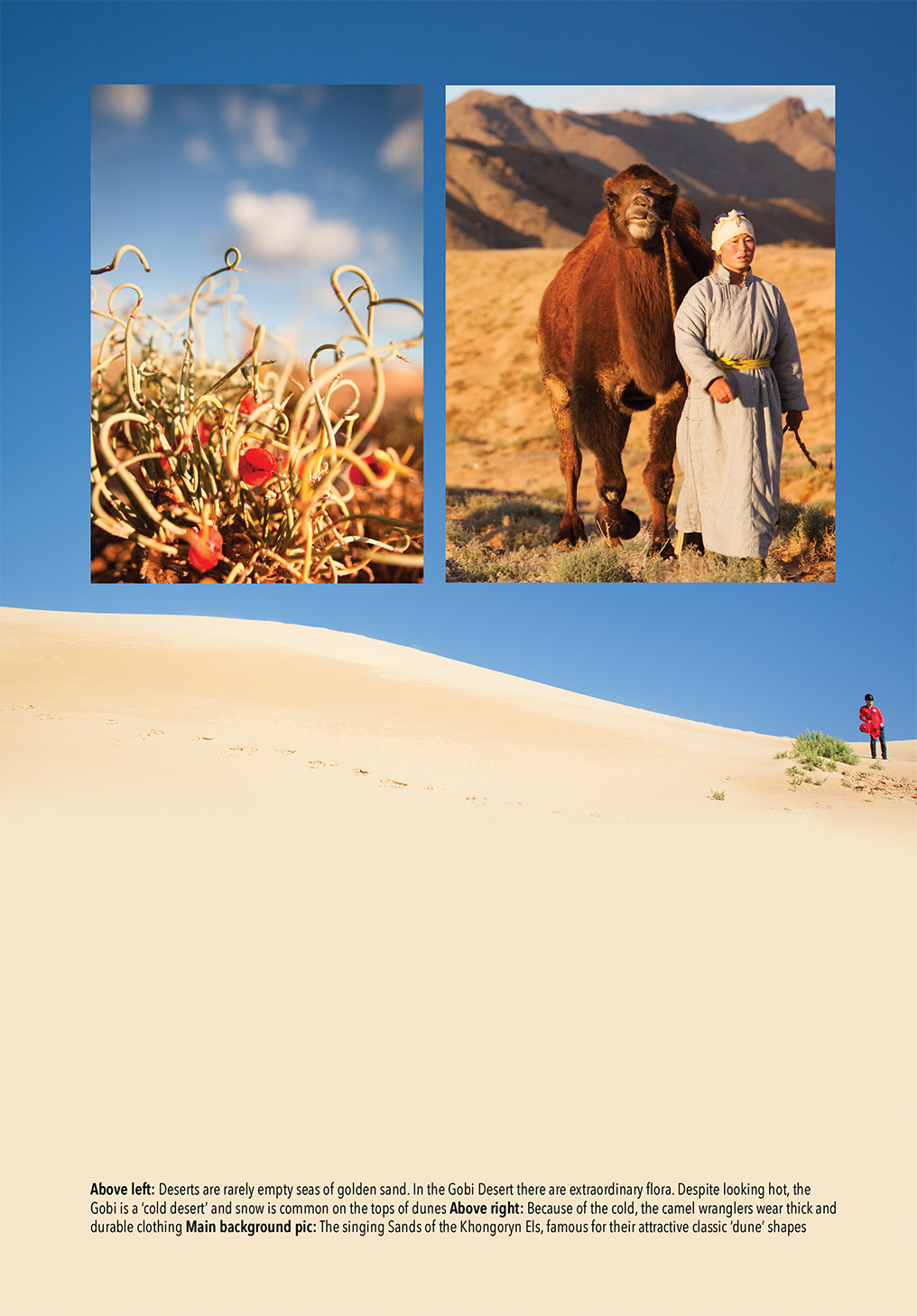 already legend. In 2006, with Børge Ousland he became the first ever to walk to the North Pole during the Arctic winter in total darkness, prior to which he had spent two years becoming the first person to circumnavigate the Arctic Circle on foot. A few years before that, he’d walked around the equator and, as we speak, he is hiking around the globe via both poles. But on this day in Mongolia, he was halfway through his Pangaea Expedition, and in the logistics tent there was a frenzy of maps and computers, GPS units and good old-fashioned clipboards. In the early even-ing I interviewed Horn for the Explorers Journal, after which he invited me to join him on a camel trek in the morning, followed by a spot of lunch.

A WORLD OF CAMELS AND CHAMPAGNE

There are 14 million camels in the world today, 90 per cent of which are dromedaries, with the remaining 1.4 million being Bactrians. Of these, 99.9 per cent are domesticated, leaving the world with an upper estimate of only 1400 truly wild Bactrians that live in the Gobi and Taklamakan deserts of Mongolia and northern China. Experts, including camel conservationist John Hare, believe that there could be as few as 400 remaining today. Whatever the actual figure, this part of the world is the last bastion where the Bactrians will either survive or become extinct. And it was against this backdrop that a small group of desert wanderers set off at sunrise with one of the most exciting explorers of our day.

I’ve spent enough time travelling by camel to know that they are excruciatingly uncomfortable until your muscles harden up enough to get used to the feeling of being thrown around in a washing machine 10 feet off the ground. And although I’d only ever ridden dromedaries (the ones with one hump), there was nothing in the experience of being atop a Bactrian (those of two humps) to suggest I was in for an easier ride. As the sun rose behind our camel caravan the heat intensified and, as the hours stretched into the distance with no end to the ordeal in sight, the only strategy I had for coping with the discomfort was to let it happen to me. 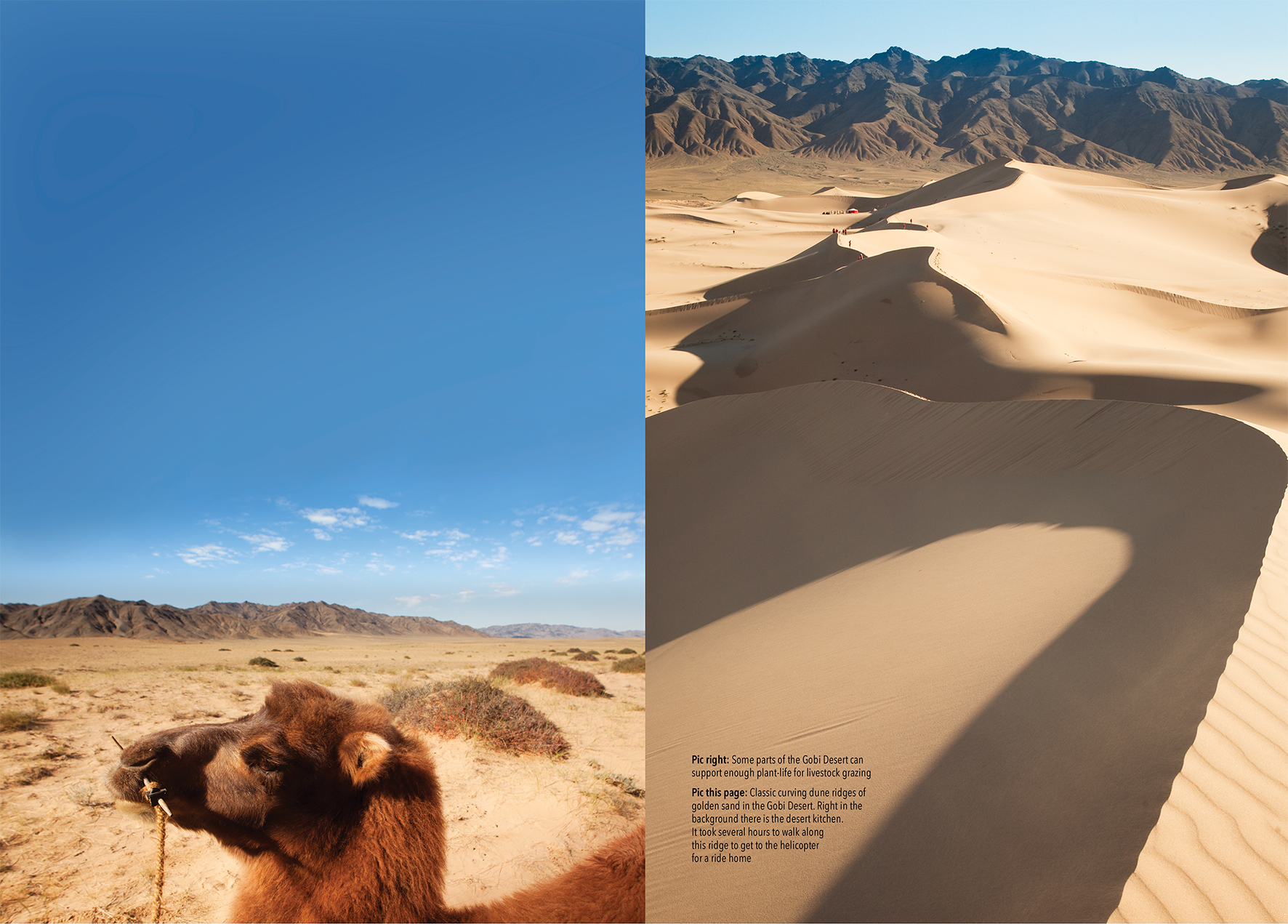 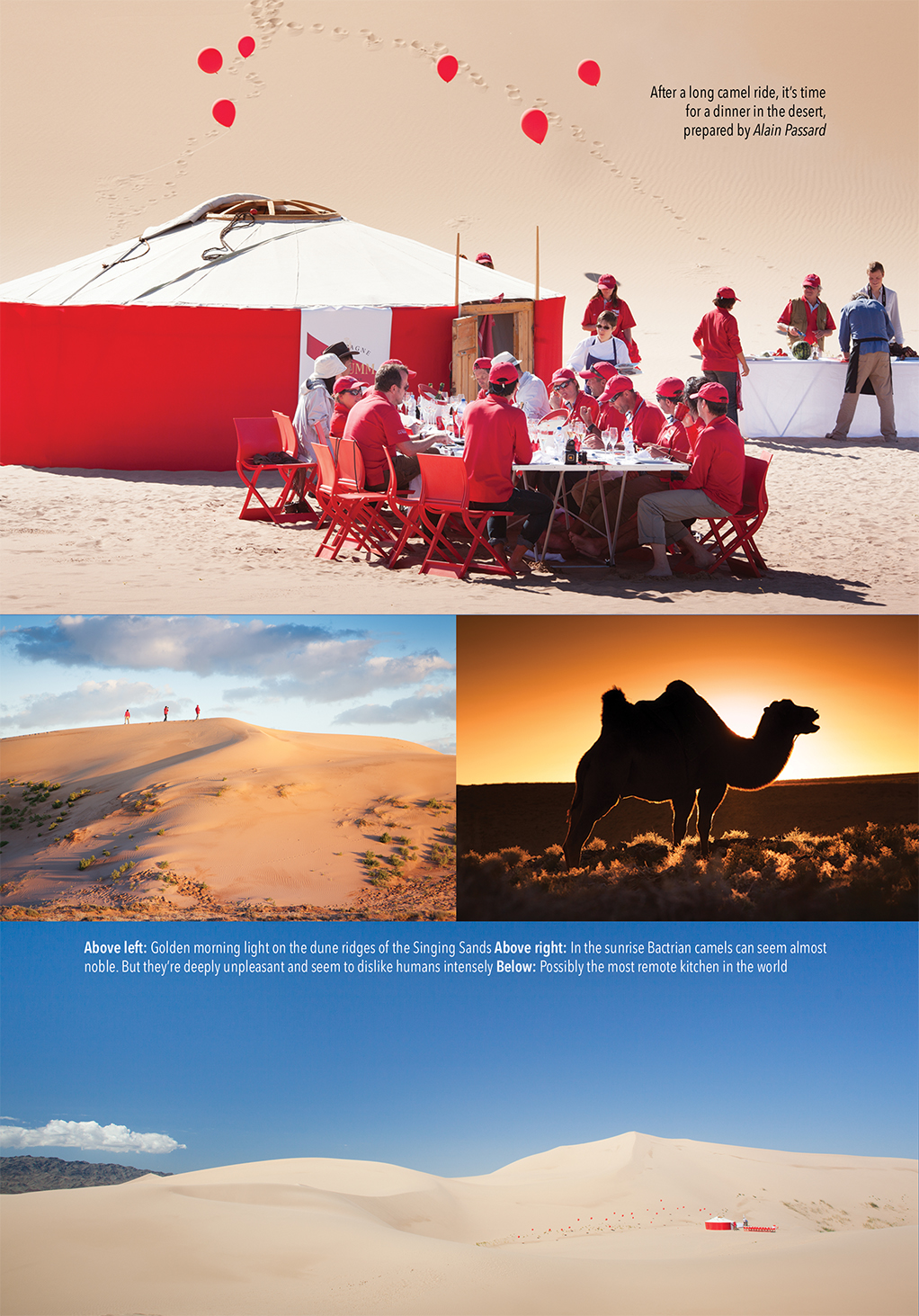 The people who came up with the expression ‘patience is its own reward’ didn’t have a clue what they were talking about. This is because, after clearing the crest of yet another vast dune, I was greeted by the sight of a red and white ger shining in a semi-circle of red balloons, from which came the magical aromas of a gourmet dinner that seemed to me infinitely more reward-ing than patience. A short distance from the ger, there was laid out a red and white dinner table in the sand. Next to the dinner table was a makeshift bar, decked out in immaculate white linen and positively groaning with chilled Cordon Rouge champagne. And there, ready to greet us was Alain Passard, one of the best chefs on the planet. This was the definition of a mirage I said to myself as I scrambled off the camel and told it to go to hell. A few moments later I was quaffing desert bubbly. 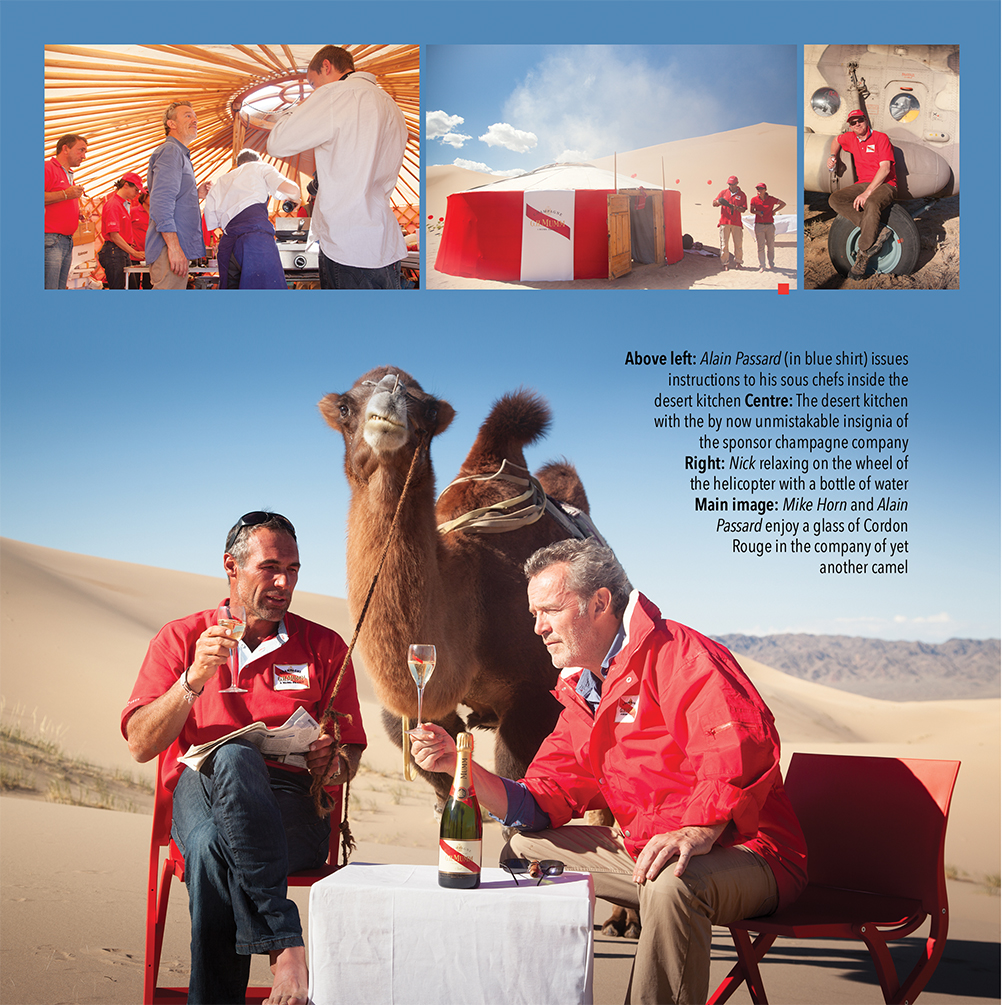 I took a few notes during the feast and from what I can decipher, among the 11 courses served by Passard were tabouli with carrots, black radish, green onions, turnip flowers and white celery; red potatoes with lemon and white honey with Mongolian beef cooked on a spade in an open wood fire. All this was paired with wines from Mumm, including a sumptuous 2002 Cuvée R Lalou (which at over £100 a bottle is something of a treat). As the entertainment drew to a close someone in a red polo shirt told us it was time to walk back to the helicopter. And although it was a relief not to have to get back on that bloody camel, it did seem a bit unfair after all that wine to have to walk home. But someone had discretely parked the helicopter behind the next dune ridge, and from the moment I shook hands with Mike Horn and Alain Passard one last time, every step I took was back in the direction of boring old Heathrow a whole world away.