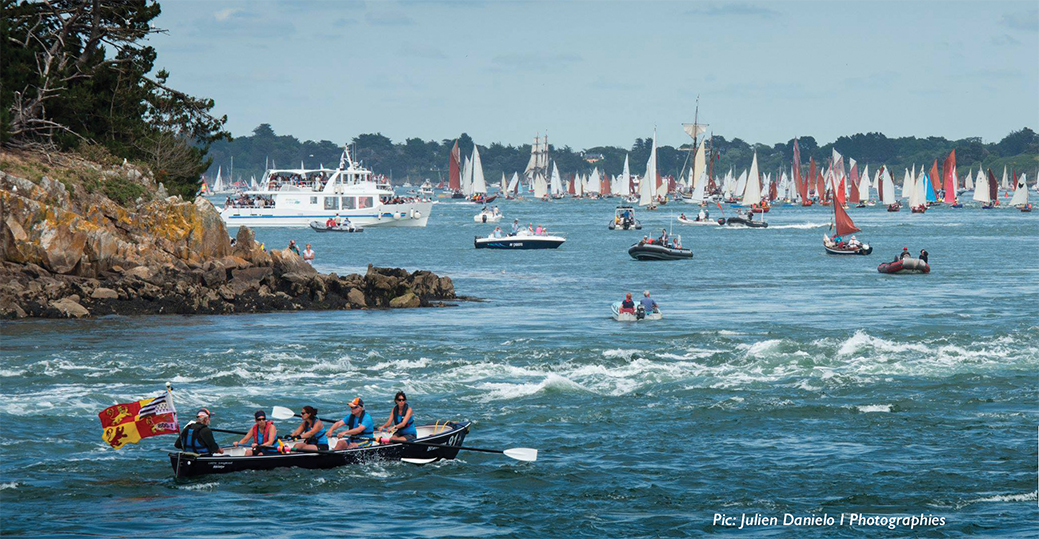 This summer Mumbles Rowing club took a team of Celtic Longboat rowers over to Brittany for ‘the gulf Week in Morbihan’.  They were joined by fellow Welsh rowing teams from Wisemans Bridge, Aberaeron and Caernarfon.

Andy Firth (Mumbles Rowing Club), organiser of the Welsh crews, has taken part in the event previously sailing, then in a Celtic Longboat for the first time in 2015.  But this year he was delighted when rowers from other Welsh Sea Rowing Association Clubs (WSRA) decided to join him by jumping on board.

The week-long event gathers boats of every size and every maritime tradition, sail and oar craft.  Most of them come from the French Atlantic coasts, but this year it had the pleasure of three Welsh Celtic Longboats!  There were around 2,000 traditional and character boats divided into flotillas, sailing every day to various ports and anchor points.  Seventeen harbours welcome sailors and visitors offering exhibitions and demonstrations with food specialities, music of all kinds and evening entertainment and concerts.  All the crews who take part are pure amateurs who come for the mere pleasure to sail and row in the gorgeous surroundings and a genuine maritime atmosphere.

The Gulf (‘Mor Bihan’  little sea in Breton) is an archipelago of uncountable islands, inlets and harbours which is separated and protected from the Atlantic ocean by a one kilometre wide strait.  With every tide, approximately 400 million m3 of seawater pour in and out of the gulf creating tides with extremely fast currents and eddies.  In fact the waters are so fast during mid-tides that boats almost become stationary when attempting to go against the tide.  We often saw mid to large sailing boats and even our own rowing boats caught in the channel moving very fast sideways.  Sometimes it felt like we were being spun in a washing machine – it was very exciting! 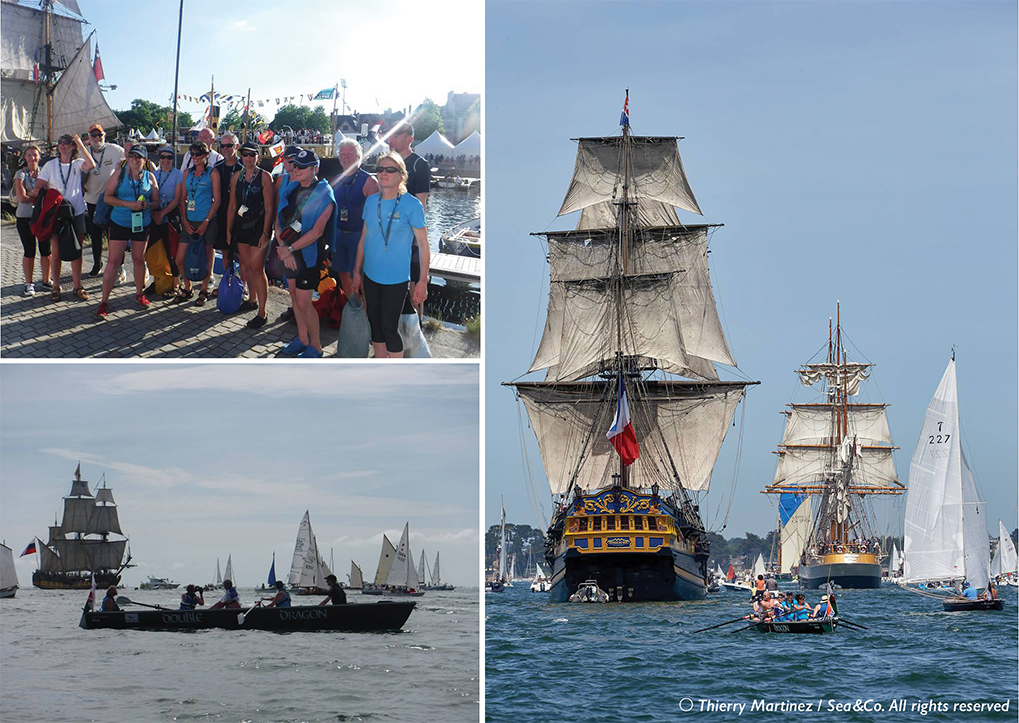 The event was incredible from the opening parade followed by the famous Journee de I’lle D’Arz, where hundreds of crews take part in the ritual picnic on the largest of the Islands.  However, the most breath-taking of all was the closing ‘Grand Parade’ where all the flotillas converge before sailing/rowing up the main channel which finished with fanfare in the capital of Vannes.  This was a stunning maritime performance as each flotilla followed their designated ‘Tall Ship’ and ours had its cannons blasting!  We felt like we were playing our part in a massive film set!  Martin Slucutt (Mumbles rower) said ‘I didn’t know so many replica tall sailing ships existed that could go out to sea, let alone think that one day I would get a chance to row beside one, up so close to them and with so many!’

Everywhere you looked there boats of every shape and size, and the horizon was covered by a sea of sails and flags.  There were over 1,400 boats in this Parade.

Brittany is beautiful and the people of Morbihan were really friendly and welcoming.  It was also a great opportunity to meet like-minded people who love the sea and their boats as well as a bit of friendly race rivalry.  We were surprised at how well we performed against other rowing boats, such as the Cornish Gigs, when we won all three races.  We were unstoppable!

‘There are no pictures that can convey the shear epic water conditions …. the speed and tidal flow shows how powerful Mother Nature really is.  If you love boats either rowing or sailing Morbihan should be on your to do list…. and I was fortunate to spend week with some fab people. …’

We are so looking forward to the next ‘Gulf of Morbihan festival’ which will be in 2019 and we hope to enter even more Celtic Longboats.  Huge thanks go to (Admiral) Andy Firth for organising and guiding us all on our fantastic maritime adventure.