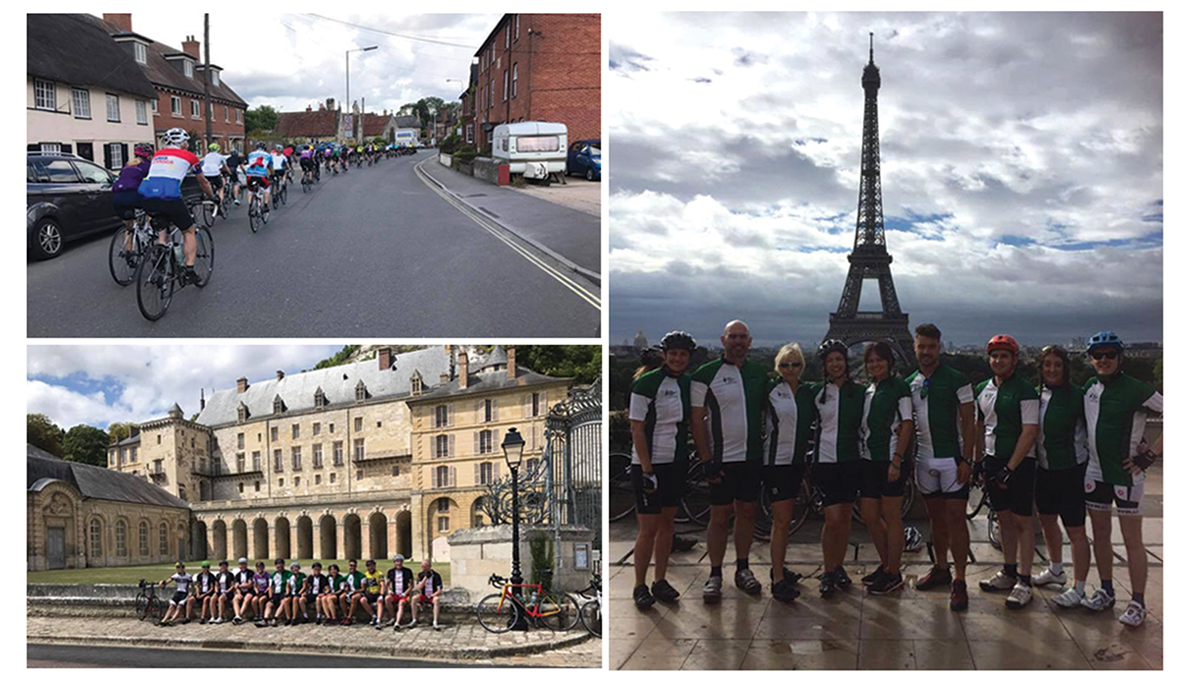 A team of nine riders took on the epic challenge of a 340 mile bike-ride between Paris and Swansea from 2-6 August.

After setting off, the first day saw the team cycling around the streets of Paris taking in the scenery at the Eiffel Tower and the Arc De Triomphe, heading out of Paris through some beautiful villages ending up in Le Vaudreuil.

The real intensity of the challenge set in on the second day after the tough journey to Le Havre to get the ferry across the water to Portsmouth. They cycled through picturesque English countryside and villages to get to Bristol where they spent their last night enjoying a team outing before the final slog home to Swansea.

The team arrived back at the Towers Hotel before being led by a police escort to Morgan’s Hotel in Swansea and were greeted with a heroes’ welcome from family and friends.

A heart operation just 8 weeks before the trip was not enough to put the brakes on Mitchell Joseph, a cousin of the late Paul Popham in whose memory the fund was established. Paul Popham died in October 2012 after suffering kidney failure for many years. His family and friends have raised thousands of pounds to help other people with kidney disease.

The rest of the team, who were led by charity manager and Paul Popham’s daughter Joanne Popham, included Hannah Crowney, Shaun Thomas, Rachel Amy, Helen Richards, Tricia East, Rob East and were just 9 of over 30 cyclists who took part in the bike-ride which was organised by Sarn Helen Events.

The Paul Popham Fund team raised just over £6500. This will go towards sending children and youths with kidney failure on an activity weekend to Newgale, giving them the opportunity to not only socialise with other patients but to improve their self-esteem and confidence by taking part in outdoor activities.

The Paul Popham Fund aims to improve the quality of life for kidney patients in Wales. The charity works with local units and centres that treat and specialise in Renal Care to purchase items that will directly benefit the patient.

The charity also regularly holds its own sporting events through their club – The Paul Popham Running Club.

Most of the club’s events are centred around having fun in addition to raising awareness. The aim of the Paul Popham Running Club is to help non-runners learn to run for life and all members of the public are welcome to join.