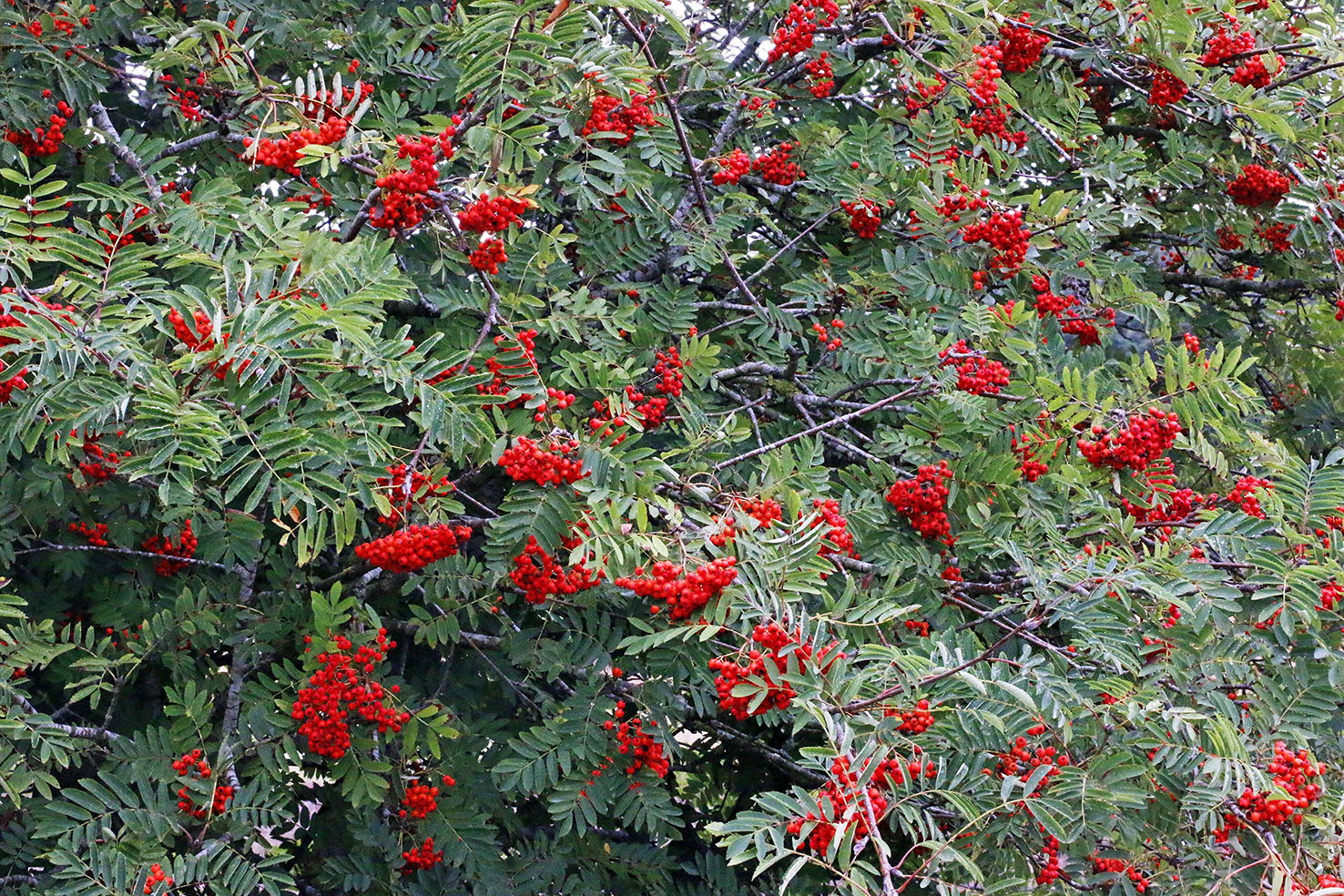 Elegant leaves and pretty flowers are usually enough for a tree to be considered worthy of cultivation, and if its leaves provide some autumn colour, then that is usually thought of as a bonus. The rowan, however, doesn’t stop there. From late summer, this little tree lights up the countryside as well as our parks and gardens with its clusters of scarlet fruits that remain on the tree well into autumn. 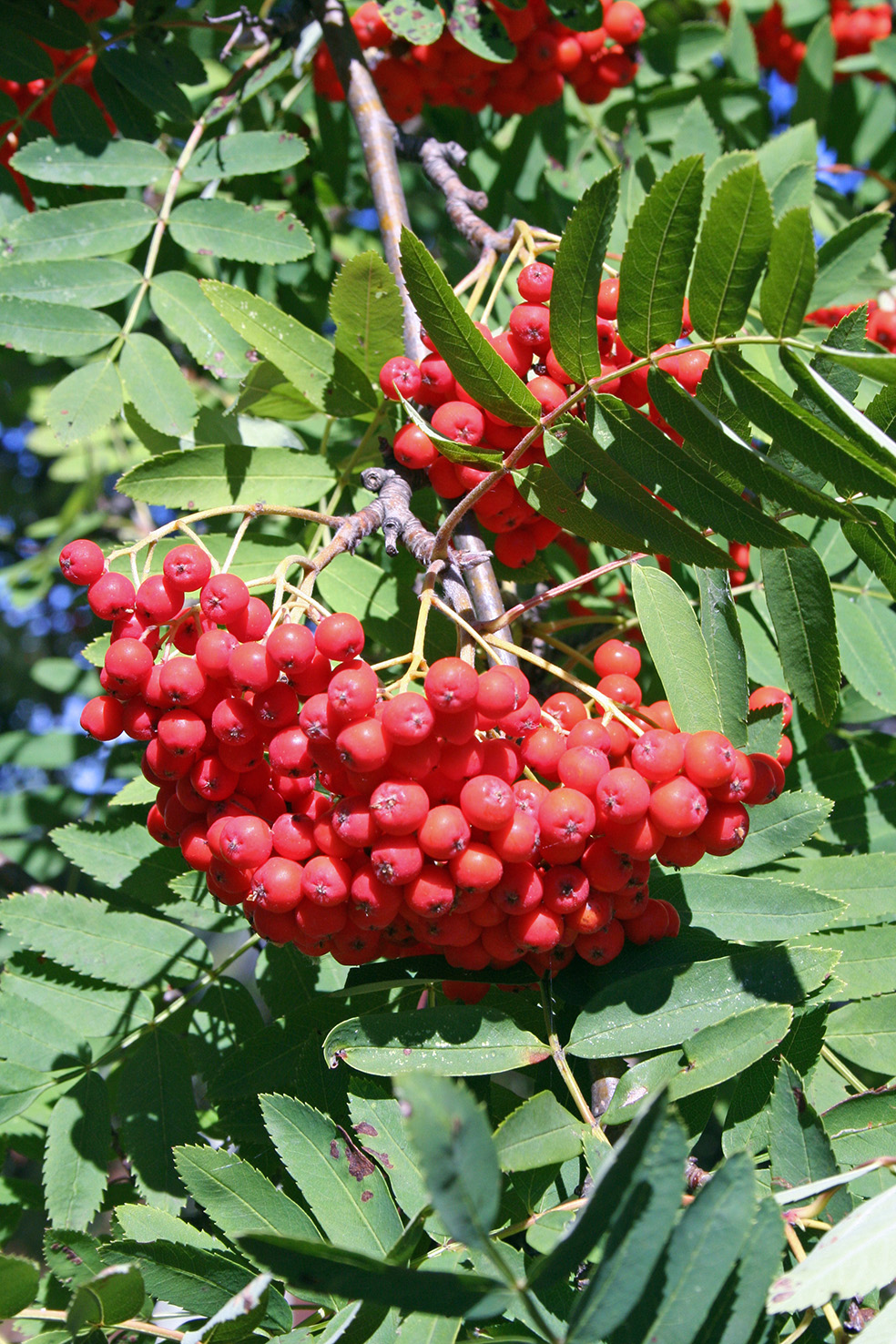 Laden in masses of their distinctive, red, berry-like fruits, rowans (Sorbus aucuparia) are a familiar and quite unmistakeable sight (photo 1). They belong to the apple subfamily (Maloideae) of the rose family (Rosaceae), so although their fruits look like berries, they are actuallly apple-like in structure (photo 2). Despite their comparatively diminutive size, rowan fruits are prone to attack by the Apple Fruit Moth (Argyresthia conjugella), a serious apple orchard pest. In fact, Apple Fruit Moths prefer rowan fruit to apples, so that they tend to cause little damage to apples in years when rowans are fruiting heavily.

Rowans are native to Britain and are widespread across a range of natural habitats, as well as being widely planted. In most parts of the country rowans flower and fruit every year, but at higher elevations and in colder climates it is not uncommon for them to reproduce irregularly. They are very hardy trees that are able to contend with considerably harsher conditions than those encountered in Britain, surviving at altitudes of up to 2400 m in the Alps, albeit in a shrubby form. This fact, in conjunction with their leaf structure which resembles that of ash, is how rowans came by their other common name of ‘mountain ash’. 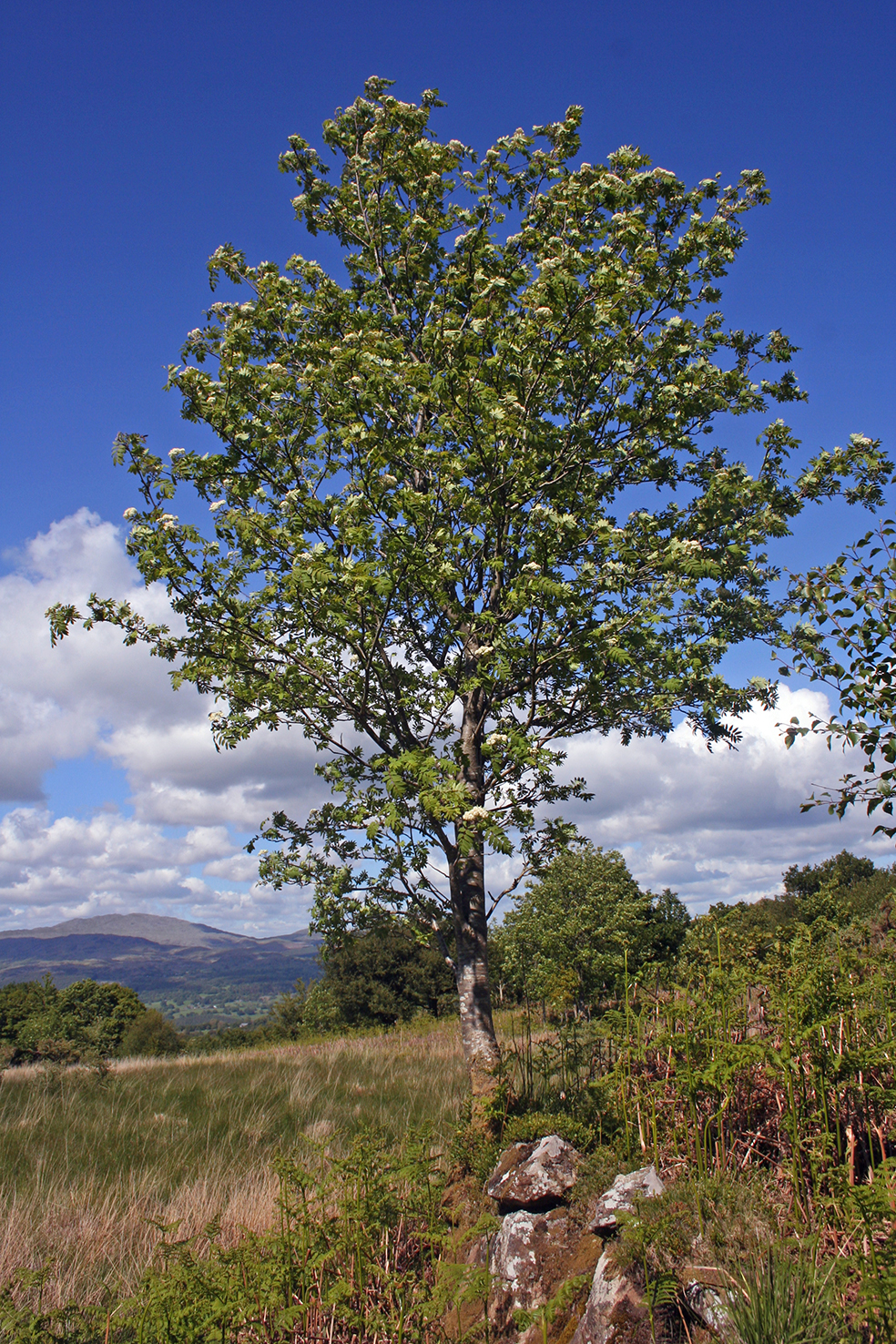 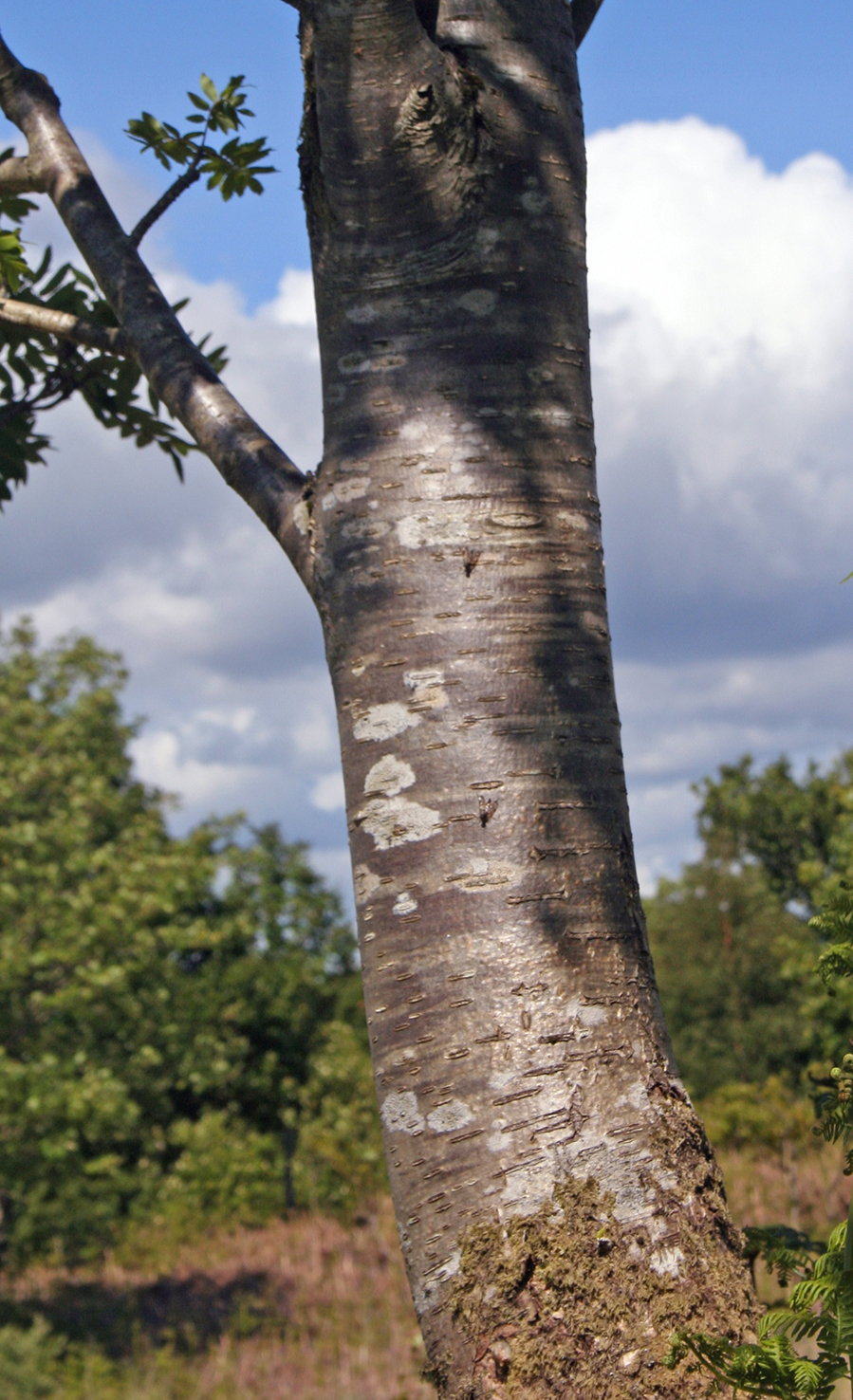 Even though their leaves are fairly simliar, rowans and ash trees are not related, and it is actually quite easy to tell them apart. Rowans are much smaller trees (photo 3), reaching a maximum height of around 15 metres, roughly half the height of ash. Also, the showy insect-pollinated rowan flowers and colourful animal-dispersed fruits are very different from their comparatively plain, wind-pollinated and wind-dispersed ash counterparts. During the winter, even though both ash and rowan bark are similar in being smooth and grey when young, the attractive horizontal breathing pores (lenticels) on rowan bark are a give-away (photo 4). Finally, rowan buds are purplish-brown and smaller than the very distinctive big black buds of ash. 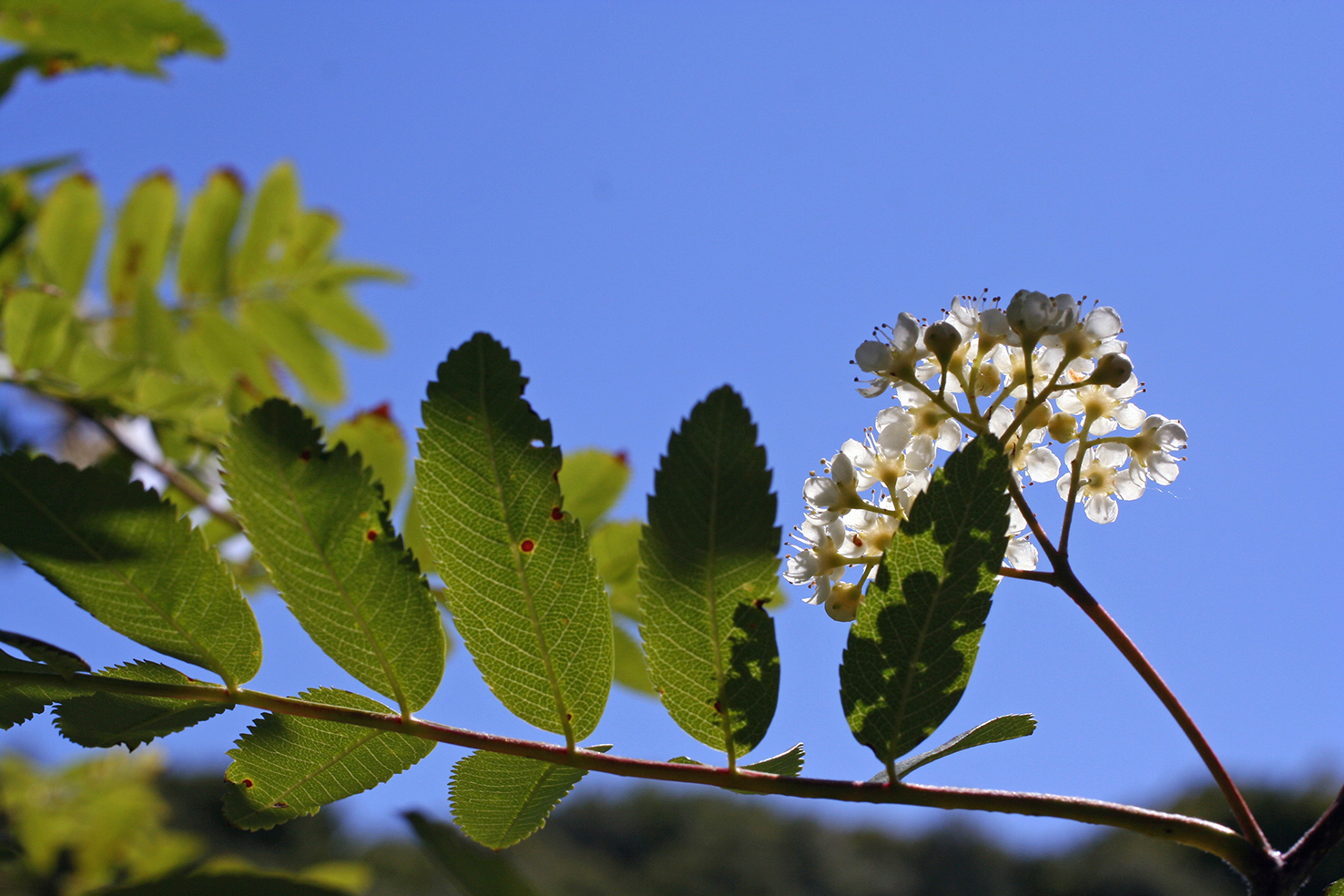 Rowan is an important source of food for a wide variety of animals. In spring, the countless flower clusters, which can be made up of as many as 300 individual flowers (photo 5), provide nectar for a range of insects. When the fruits ripen, many different mammals and birds take advantage of the copious crop, including such unlikely candidates as foxes and pine martens. Rowan fruits are particularly important for birds, with over 60 different species having been observed feeding on them. In fact, birds like rowan fruits so much that they used to be one of the most favoured baits used by bird catchers.

Rowan fruits can remain on the tree for a very long time if the weather is cold and relatively dry, so they represent an important food source for many birds throughout the winter, especially in colder climates with long periods of snow cover. Scandinavian waxwings, for example, are forced to migrate south in years of sparse rowan crops, whereas they stay put when rowan fruits are plentiful.

Most animals swallow rowan fruits whole, digesting the fleshy parts and distributing the seeds around the countryside along with individual portions of fertilizer, thus providing an important service to the trees. Some seed-eating birds such as bullfinches, how-ever, are able to crush and digest the seeds, which they carefully prise out of the fruits, discarding the rest.

Large mammals such as deer and sheep tend to have an even less harmonious relationship with rowan trees, either eating saplings whole when they are young, or peeling the bark off bigger trees, thereby often stopping rowans from becoming established in otherwise suitable habitat.

Humans have also been known to utilize rowan, both for its fruits and its wood. Raw rowan fruits are very astringent and unpleasant tasting, and would be toxic if eaten in large quantities, but once cooked they have long been used for culinary purposes. Freezing them first (or gathering them after the first frosts) increases their sweetness. They have also been used in the manufacture of alcoholic beverages. Rowan wood is strong yet flexible, and over time has been used for a variety of purposes such as longbows, tool handles and walking sticks.

Rowans are short-lived trees, rarely surviving longer than 100 years. Despite this, they are among the most widespread, adaptable and resilient of all native European trees, never afraid to take on a challenge (photo 6). Not only have they prevailed in some of the harshest natural conditions, they have also successfully overcome the most difficult challenge of all and secured themselves a place in the human environment, thus safe-guarding their future for a long time to come.