THIS MONTH, I AM GOING TO WRITE A FOLLOW UP ON TWO ARTICLES I HAVE WRITTEN IN THE PAST YEAR

In the first reflections, “Readers’ Wartime Recollections”, published in Bay April 2017, I had been contacted by Mr Chris Davies, CBE, DL, who had told me about his father, George Haydn Davies’ first wife Ida, who had been killed during the first bombing raid on Swansea during the second world war 1940. The Davies family had been living at 3 Broadway, Sketty, when Ida and her daughter had gone down to 28 Russell Street to visit her family. Ida 28, survived the bombing raid but died the following day, 2 September in Swansea Hospital. The rest of the family, father Reginald John Jones 55, mother Mary Kate Jones 56, sister Elaine Jones 26, brothers Kenneth Jones 16, Alan Hirwain Jones 12, and daughter Jean Margaret Davies 6 had all been killed in the bombing raid on 1 September 1940.

Whilst in communication with Chris, he asked me various questions as to where the family were buried and the location of the graves. The answers were obtained from the Cemeteries Department in the Civic Centre – they know me well in that office! He went to Oystermouth Cemetery and laid a wreath. To add to the mystery, he told me there was already a wreath in position, did I possibly know who could have laid it? I was foxed.

Over last few years, I have been researching the men and women from Swansea, who fought in both world wars. I also created two Facebook pages, Swansea War Dead – First World War and Second World War. Each day I would put up a post stating those men/women who were killed on that particular day. I received a message from Mr Bob Rees, asking a variety of questions in regarding to the incident on the 1 September 1940. We spoke on the phone and I had told him about Chris, and where he fitted in to the picture.

I arranged to meet the two men at the cemetery on 1 September this year. 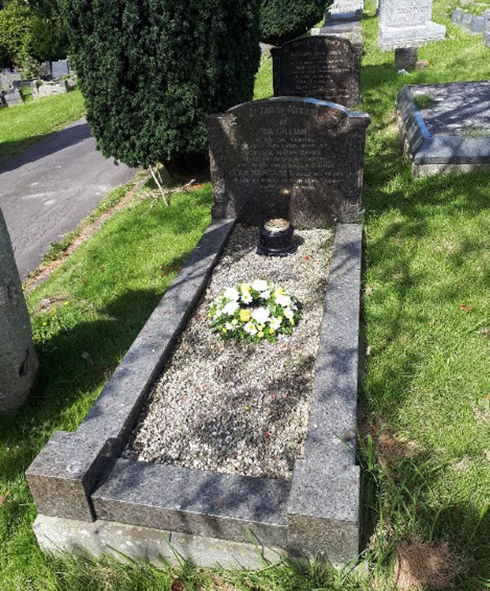 Wreaths were laid and then before Mr Rees left he gave both of us a DVD; a recording that he had made of a conversation with an elderly gentleman, a Mr Grace. Mr Grace was an eyewit-ness to the bomb-ing on that day in September 1940, A boy of 14 at the time, he stated that the bomb which was HE (High Explosive) had landed in the South Wales Bus Yard situated at the back of the house, causing the devastation. At the time there were no Anti-Aircraft guns located in Swansea, the nearest being located at Cardiff. Other places that were hit that night, 1 September 1940 were Bristol, Essex, London, and Shrewsbury. In Swansea, 17 civilians, including 3 Norwegian Merchant Seaman, staying at the Pembroke Hotel, St. Helens Road were killed.

What about the connection between the two men, Chris, and Bob?

Even though they are not blood related, Chris’s father is the husband of Ida. Bob’s grandmother, Ida Syme was the sister of Mary Jones, mother of Ida. Or to put it another way Bob’s grandmother was Chris’ fathers first wife’s aunt!

3 Broadway was renumbered later to 10 Townhill Road, a few doors up from here lived Ivor Watkins, who would be Swansea’s Last Tommy of the First World War.

In the second reflections, “Blue Plaques of Swansea – Mumbles Lighthouse”, published in Bay July 2017 I wrote about the blue plaque commemorating the bravery of the two sisters, Jessie Ace, and Margaret Wright (Ace), during the storm of 1883, saving lifeboat men from disaster. Both girls were awarded with a gold cross, blue medal-lion, and a copy of Sir Walter Scott’s book The Pirate (1822).

With the ‘disappearance’ of Jessie, I set a question whether anyone knew of her whereabouts and that I would really like to hear from them.

I was delighted to have an interesting response from Mr John Griffiths, of Swansea Harriers. He certainly had a good run with the results, let’s get on the starting blocks – we will get to the finishing line in record time!

In 1885 there was a marriage between couples, Jessie Ace, Rose Wright, John Dunstan, and John Henry Morris. (If anyone does have this problem in their research, at least one of the couples would be listed on a later census, check to see who was married to whom). In this case Jessie was married to John Dunstan at St. Mary’s, Swansea. At the time of the marriage Jessie was living at Argyle Street.

During 1888, Jessie – with an infant – were passengers on a ship named Garonne, (pictured left) bound for Australia.

Jessie and John had a son, Courtney Ace Dunstan, born in 1887. You would have thought that the story ended there, but wait, there is more.

Jessie Dunstan was divorced by her husband in 1901, in New South Wales – the grounds for divorce were the alleged ad 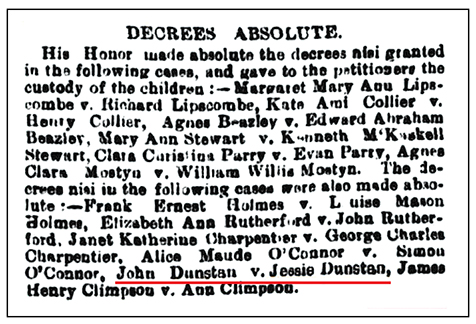 Mr John Griffiths had followed a line of enquiries to Australia, France, and the USA. Although the line to America came to nothing, there was a link with France, but the most promising results came from Australia. There does seem to be a few more children born in Australia, John and Oscar. Information received from Jessie’s great grand-daughter, Vicki Dunstan, indicate that Jessie died during 1936 and that she is buried in a grave of a family that she was working for – the Nagle family. Also buried in the same cemetery, Rockwood, Sydney, NSW, Australia in a different grave was her son Oscar, who died the same year 1936.

We have reached the finishing line!

I would like to thank John Griffiths for his time and sterling effort on getting the information for this article. 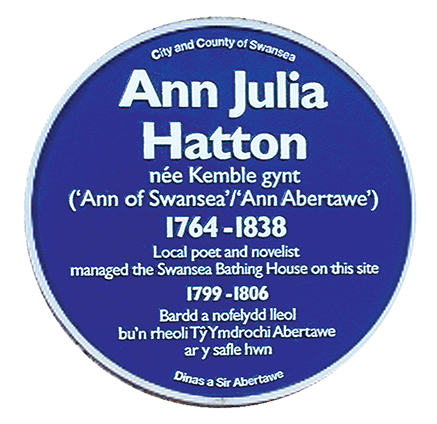 This is my second article regarding the blue plaques in Swansea this one is situated on the Civic Centre facing the sea and is for Ann Julia Hatton. She is being commemorated for being a local poet, novelist and managing the Swansea Bathing House 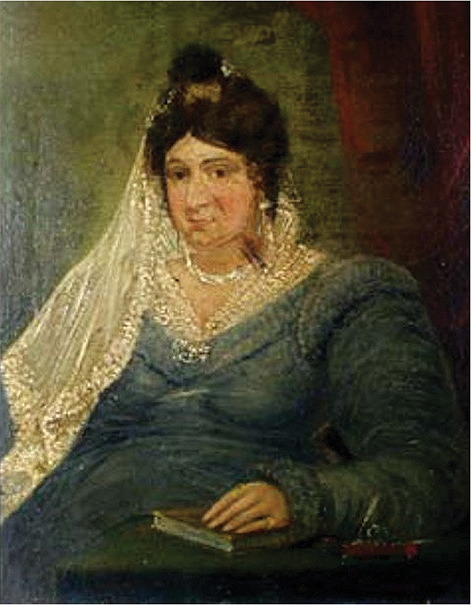 Ann had a very colourful life before she came to Swansea. Born in 1764, Ann Kemble, was the daughter of Roger Kemble. She was one of 12 children born into a Kemble theatrical family, her father was an actor-manager of a touring troupe, Ann’s siblings included, Sarah Siddons and John Philip Kemble who achieved fame on the stage of the Theatre Royal, Drury Lane.

She was apprenticed to a mantua maker – an early term for a dress-maker before she went on the stage. At the age of 19, she married the actor, C. Curtis, who turned out to be married already. What a rotter. Ann was in financial straits and attempted suicide in Westminster Abbey, afterwards she became a “model” in the notorious London bagnio (bathing house) and brothel areas. In 1792 she got married for a second time, to William Hatton. The following year the couple embarked on voyage to America.

On returning to Britain in 1799, the couple settled in Swansea. They first kept the bathing-house near the sea front, till William’s death in 1806. After this time, 1806-1809, Ann kept a dancing school in Kidwelly, Carmarthen-shire. Ann is remembered from 1809 to her death in 1838, as a well-known writer. During the period 1810-1831, she wrote poetry and 14 gothic themed novels under the pseudonym of “Ann of Swansea”. Ann is buried in St. Matthews Church, High Street. A portrait of Ann (above), painted during 1835, aged 71, by William Watkeys is held at Swansea Museum.

Charles is a researcher and family historian. If you have a question regarding your family history that you’d like to put to Charles, he can be contacted at: swanseafamilyhistory@yahoo.co.uk – he’d be delighted to hear from you