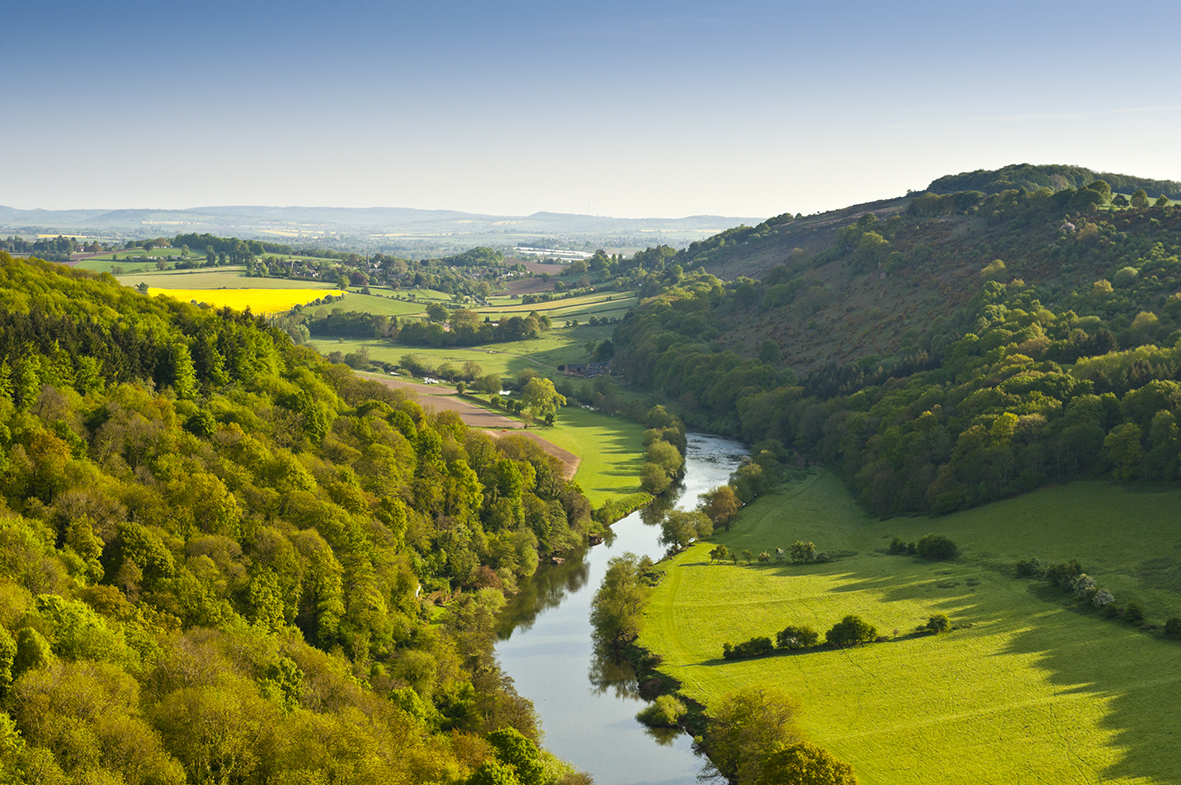 This month Ian is taking us across the water to England for a walk that offers stunning autumnal scenery. It’s an easy, if possibly slippery walk, so dust off your anorak and dig out your walking boots and enjoy.

You know you’re getting old when rock stars are starting to die from natural causes. No longer are they croaking it from substance or alcohol abuse, (commonly at 27 years of age) or tragically in plane or car crashes, whilst living life in the fast lane. No, it’s becoming more prevalent recently that they’re being caught out by Old Father Time himself with more routine ailments doing for them. To illustrate the point, you’ve got David Bowie, Glen Campbell, Glen Frey and most recently Walter Becker from Steely Dan. And this chastening development merely serves to remind us that time relentlessly marches on and there’s bugger all we can do about it. However, we can certainly try to ease the process by staying fit and healthy and I can’t help but notice on social media that many of us baby boomers are now taking up cycling, marathon running and the like, which I have to say is fantastic. So, if you fall into this category and feel the need to become more active, don’t just read this article in the comfort of your own home, put on a pair of boots and get out there! 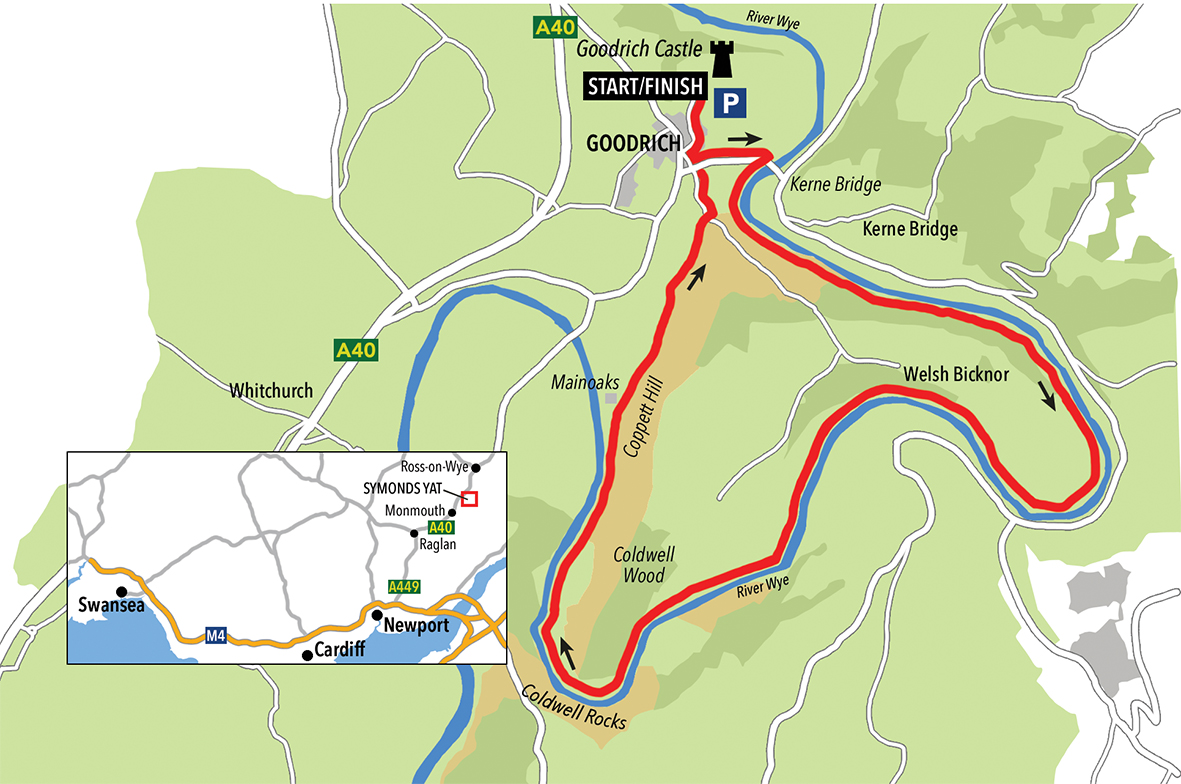 This month I wanted to plan a walk in an area that shows off the beautiful colours of autumn in the UK’s version of New England in the Fall. So what better place than the stunning Wye Valley in the area surrounding Goodrich and Symonds Yat in Herefordshire? Bit controversial I know, going into England and all that, and a bit further afield than usual, but hey come on let’s live dangerously. Let’s do Old England in the Fall! (You can obviously tell from the accompanying photographs – apart from the stock photo above – that they weren’t taken in the autumn, in fact it was late summer, so you’re going to have to use your imagination a bit to picture the trees in an Autumnal hue)

The walk starts in the car park of Goodrich Castle, just a mile or so off the busy A40. This road has always given me the impression that it’s the main artery for the stereotypical “Company Rep”, bombing up and down chasing their sales targets, speaking to Maureen in accounts on their mobiles (hands free of course), suit jacket hooked up on the back window, listening to their Dire Straits CD or Steve Wright in the afternoon, completely oblivious to the countryside around. To be honest, I think we’re all guilty of that (of being oblivious to our surroundings rather than playing Dire Straits CD’s). Let’s face it, when you drive through an area, your perception of it is generally shaped by your view from the car.

A perfect example is around Gilwern, near Abergavenny on the A465. It’s a busy stretch at the best of times made worse recently by the horrendous roadworks and it’s generally unpleasant. But make a very short detour off the road and literally yards away, hidden from view is the Monmouthshire and Brecon canal, a right old rural idyll, where you can find  barges making their way serenely along its course, albeit against a backdrop of the roaring traffic, but by blocking that out, it gives the area a completely different complexion. And around Symonds Yat is no different, just a short hop off the busy main road is one of the UK’s most treasured beauty spots. It’s Premier League stuff. 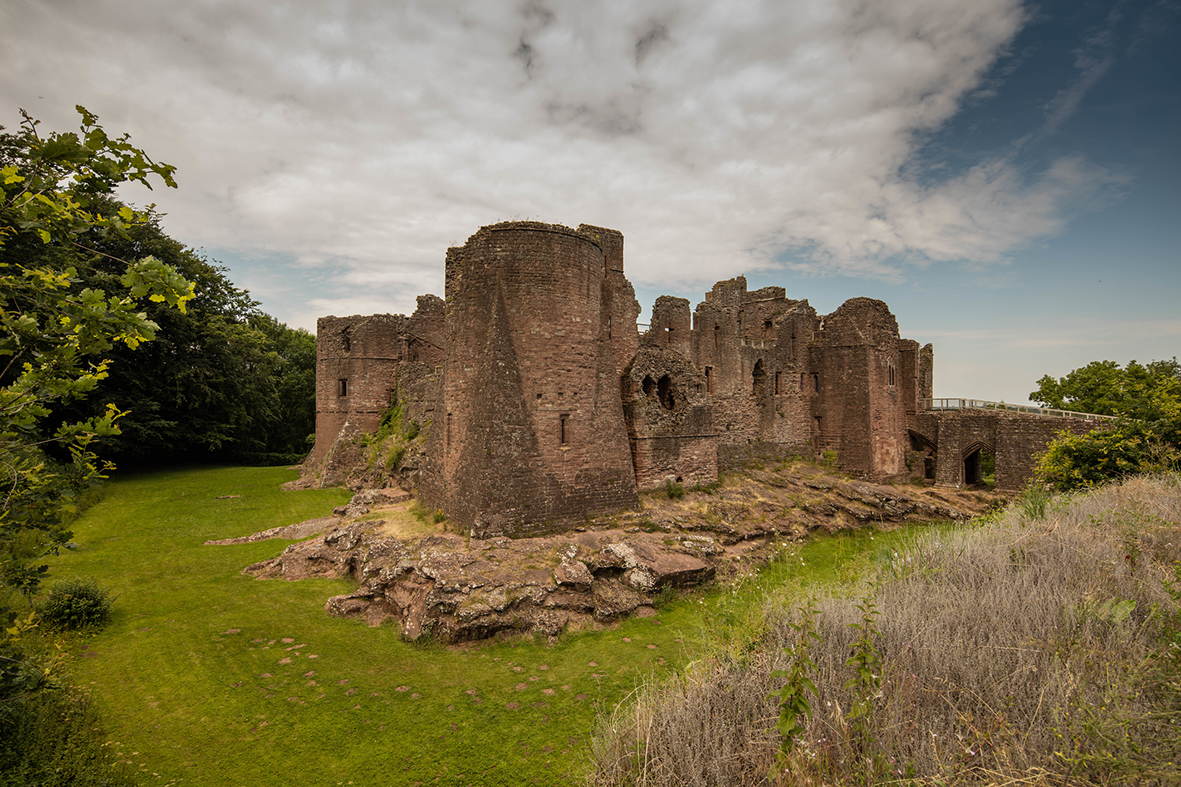 way, where was I? Oh yes, Goodrich Castle. I’ve often seen signs but never visited, probably sub-consciously writing if off as somewhere not worth bothering with. I come from Wales mun, I convinced myself, where there’s a spectacular castle around every corner, so what could this patch of England’s pleasant land possibly offer in the castle department? Well to be fair, quite a bit because it’s an impressive beast, a well preserved red stoned fortification, on an elevated rocky outcrop over-looking the Wye. (The castle is not actually on the route but it’s just a couple of hundred yards away so would be a shame to miss it.) 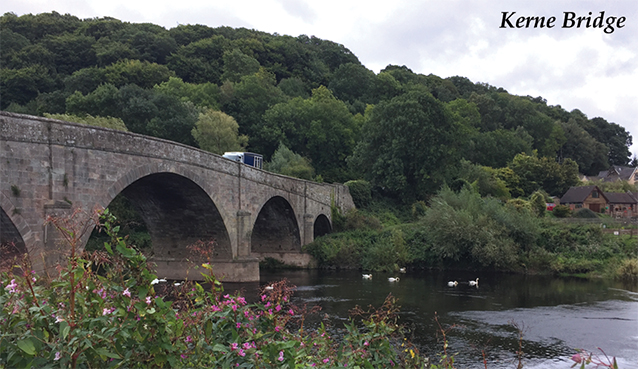 Park in the car park (£1 charge but check opening and closing times) and walk back the way you’ve just come, onto the main road and turn left down the hill towards Kerne Bridge which crosses the river.

Be careful along here because it’s a busy road and whilst there’s a narrow pavement it’s only for part of the way. Once you reach the bridge, the path is signposted to the right and it’s away we go!

The River Wye is stunning and pollution free for much of its 134 miles length. From its source in the Cambrian mountains around Plynlimon in mid Wales, it snakes and meanders its way through mainly rural areas to journey’s end in the Severn estuary, passing many a pretty town and village on the way; Hay-on-Wye, Rhayader, Builth Wells, Ross-on-Wye, Monmouth and Tintern. It’s suggested that it’s the most beautiful river in Britain and it’s hard to argue as you stroll along its banks. You won’t see any Tesco trolleys in the river around here I can tell you! It’s your constant companion as you walk through woodland of ash, oak, horse chestnut and open farmland populated by dairy cattle and weirdly, pheasants (I was told that there are a few shoots around here), whilst the river itself attracts birdlife in the form of kingfishers, herons, dippers, swans, cormorants and goosanders. It also provides some of the best salmon fishing in the country. You can almost imagine seeing Jack Hargreaves (remember him from the programme How in the 60s and 70s, with Bunty James? Bunty! That’s the problem these days, there aren’t enough people called Bunty anymore!) pipe dangling from the corner of his mouth, sitting on the bank knocking up an angler’s fly out of reed warblers feathers and otter hair. It gives out that sort of vibe.

It’s also a popular recreational spot where canoes are available to hire along many stretches of the river including this one. Several passed me by giving the place a bit of a disturbing ‘Deliverance’ feel, albeit one without the dodgy dental work and unusual sexual practices. Oink oink.

Geologically, the area is very interesting too (*anorak voice*). It’s completely underlaid by Old Red Sandstone, formed in the Devonian period and the same rocks as found in the Brecon Beacons. Subsequent geological periods have seen newer stratas of rock being formed and laying on top including Carboniferous Limestone which forms the gorge at Symonds Yat. This landform has been shaped over millions of years by the erosional forces of the river, creating cliffs up to 120m high. Phew, impressive stuff eh? Hope you’re paying attention – there’ll be a test.

Meanwhile, back to the walk. Underfoot, the path is quite muddy and slippery in parts from the start and quite overgrown with nettles so please take care.

Also your progress is slowed down by a number of fallen trees blocking the way which require climbing over or ducking under. However, it’s a straight-forward route as you basically follow the course of the river almost all of the way. But there is one bit you need to be careful of just after passing beneath the derelict bridge after a couple of miles in. The path seems naturally to go to the right, but keep to the narrower path on the left which continues alongside the river. A little further on and once again the more obvious track seems to want to take you to the right, but ignore it and head almost at right angles to the left to find the river once again. Basically, the idea is to keep the river close to you on the left and then you won’t go far wrong. 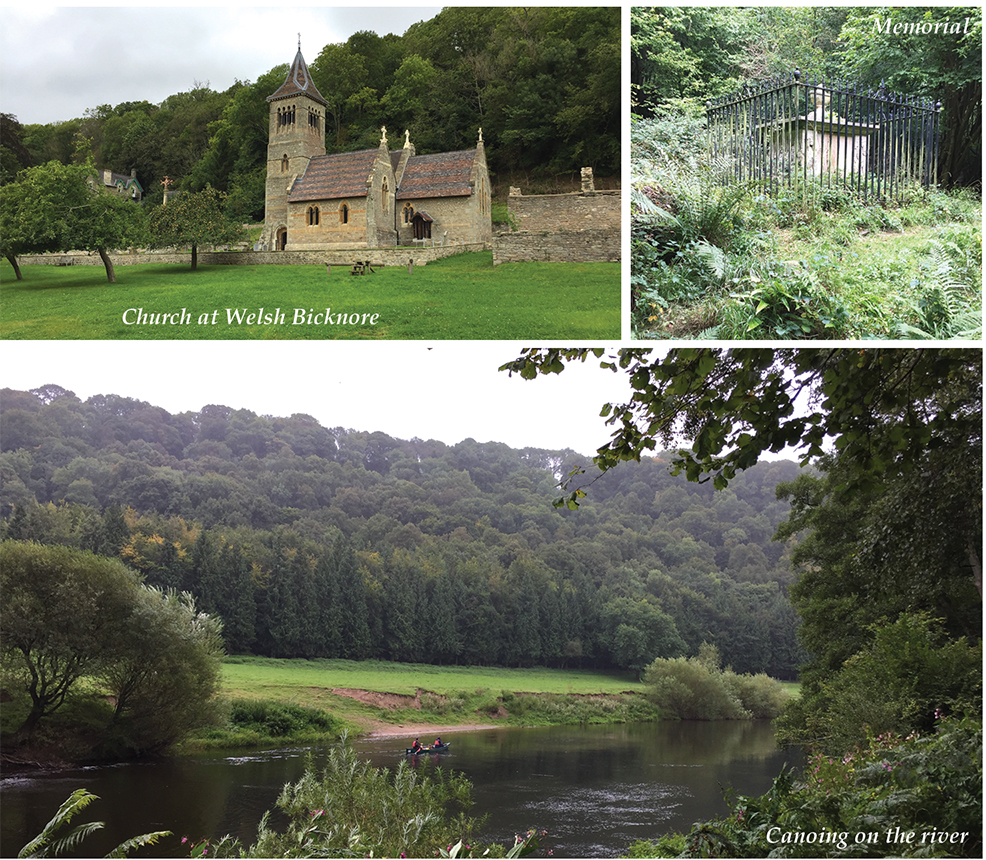 Things to look out for en route are the church at Welsh Bicknor and a rather sad, yet grand looking memorial to a young 16 year old lad named John Whitehead Warre who tragically drowned in the Wye whilst bathing close to this spot on 14th September 1804. Poor dab. And then soon, the opposite river bank rises steeply into a gorge like landscape and the two limestone rocks of Coldwell Rocks come into view poking out from dense woodland and which hopefully by the time you visit, will be parading all its autumnal glory.

Now, I have to admit that this particular route wasn’t my first choice. I had planned to cross the river via what turned out to be the derelict bridge but there were no alternative crossing points. At this juncture, you see, the Wye forms a very distinct loop, a meander (from your geography lessons), with the two straight sections being at this point and the other over the hill in Symonds Yat. Had I been able to cross, I was going to climb to the top of the hill to Yat Rock giving me a panoramic view of the entire area, before descending into the spectacular gorge itself to savour the display that was on offer there, because it really is the jewel in the area’s crown. But alas, it was not to be. Nonetheless, if you do have the time, you must visit as it will be a sight to relish. Yat Rock can be accessed by car and there are also a number of walks in the area which you can no doubt find online. Maybe another reason to visit is that there are a few nice pubs and you can cross the river on a quaint hand pulled ferry. 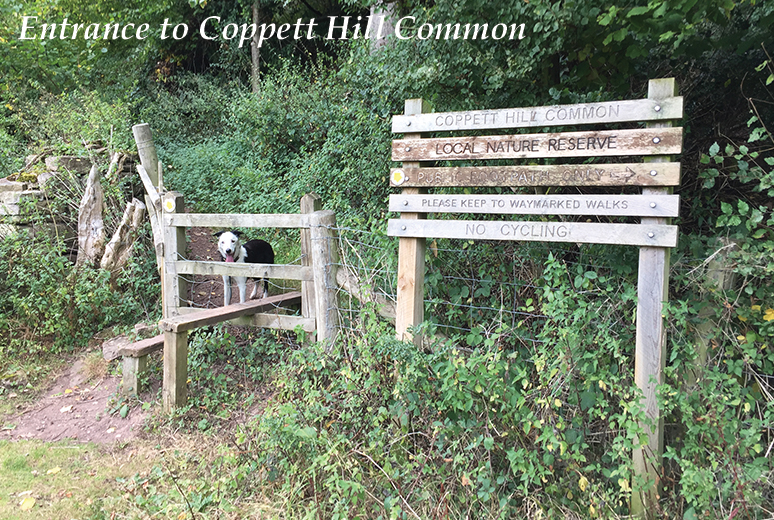 Ok, nearing the end now. As you pass the Coldwell Rocks, the river swings around in a northerly direction and just before the house marked as Mainoaks on the map, you can see a path to the right taking you into the woods and Coppett Hill Common where you finally leave the river behind. (Actually I was told by a lady in the cafe that there is a ridge path which you can access just opposite the Rocks, so that might be a better idea)

Whichever route you take, it’s bye bye to the Wye.

The path eventually emerges at an elevated point in the village of Goodrich, which affords a view of the church, castle and Kerne Bridge from where the walk began.

Now look, I grant you rambling has got a bit of a fuddy-duddy image attached to it – the kind of pastime that Jacob Rees-Mogg would probably enjoy and one that Theresa May definitely does, when she’s not running through fields of wheat. But in your pursuit of a healthier lifestyle, why suffer the indignity of revealing all the contours of your middle aged body by wearing Lycra cycling gear when you can hide it all under a sensible pair of walking trousers and a nice anorak?

Dog Friendly: Yes but kept on a lead (ignore some of my photos!)