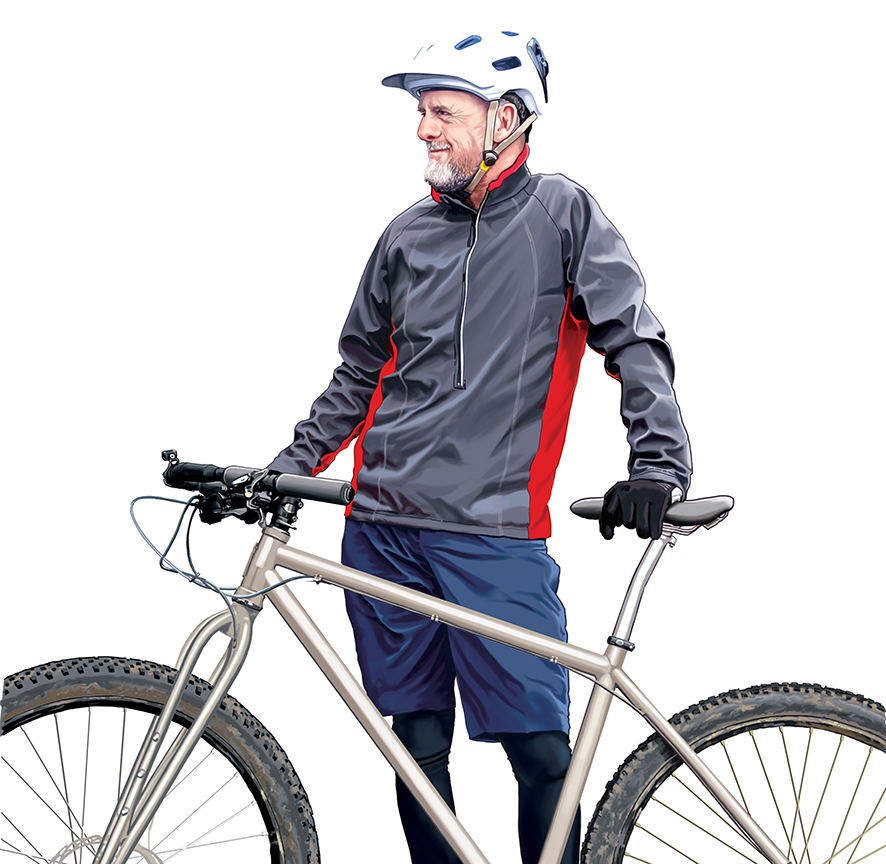 Throughout 2017 the Bay’s front covers will feature one of our many contributors, each cover illustrated by our in-house designer/illustrator Simon Williams. This month it’s the turn of our mountain bike trail explorer and general Mr nice guy Kim Jones.

Kim was born in Mountain Ash in the Cynon Valley but has lived in Swansea for many years. His love of the outdoors and nature started from a very young age – as a child he preferred to sleep outside and remembers on one occasion dragging his mattress onto the balcony one evening while on a family holiday to Spain, just so that he could experience the stormy weather.

Until recently Kim was in the finance industry before being made redundant. But being Kim, he has embraced his new found freedom and used his enforced unemployment to pack his bike onto his trusty Land Rover – he’s converted it to provide a bed for the night with cooking facilities – decorated with Tibetan yak bells and takes to the hills. Lets just say you’ll certainly hear Kim arriving wherever he travels!

Kim has been writing for the Bay since February 2013, (phew, where does the time go!) not only covering Swansea and the surrounding areas, but also further afield to such far flung places as Kyrgyzstan, Transylvania, Madiera and the Picos Mountains. Which country he’ll explore next is anybody’s guess….watch this space! 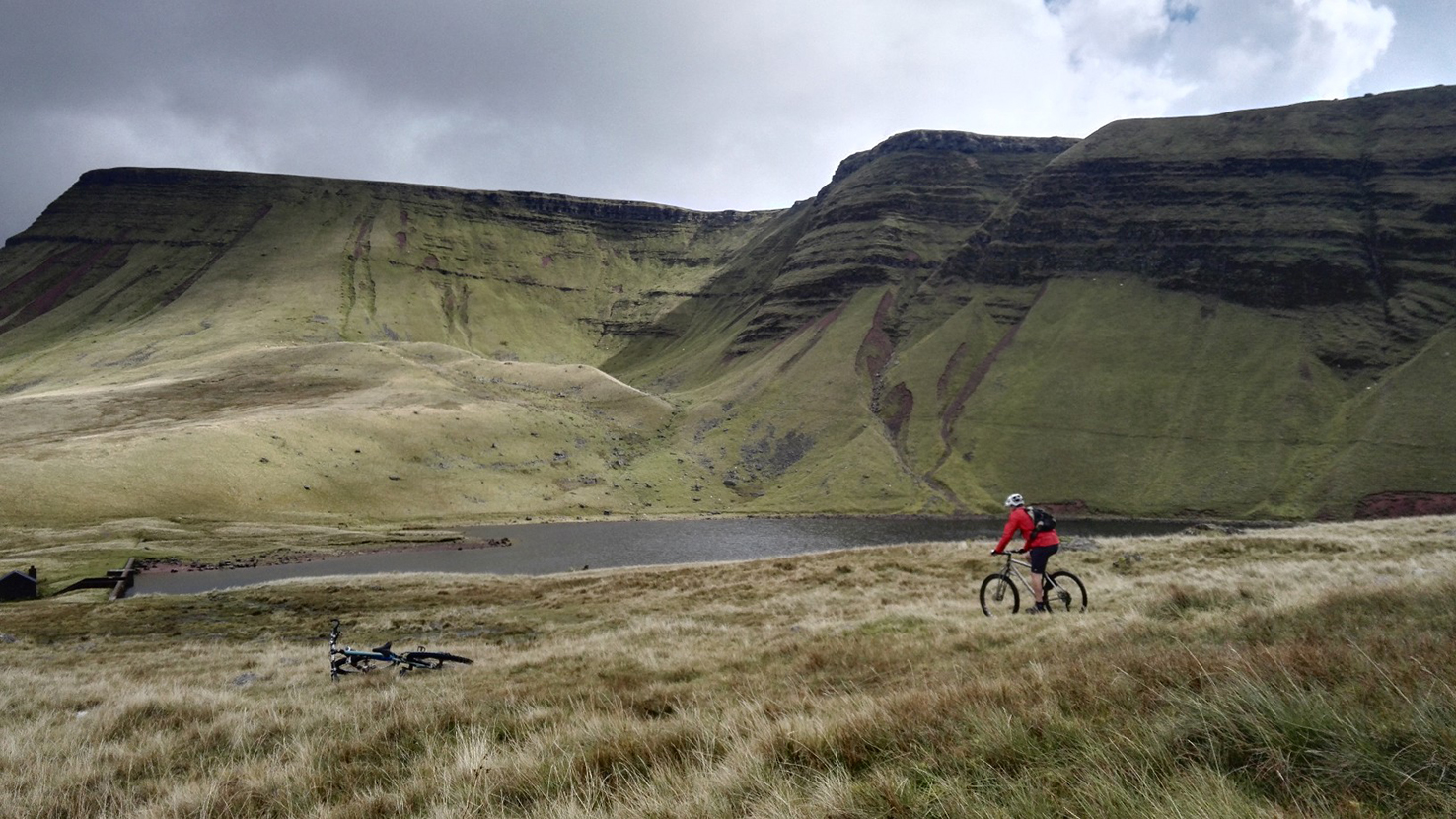 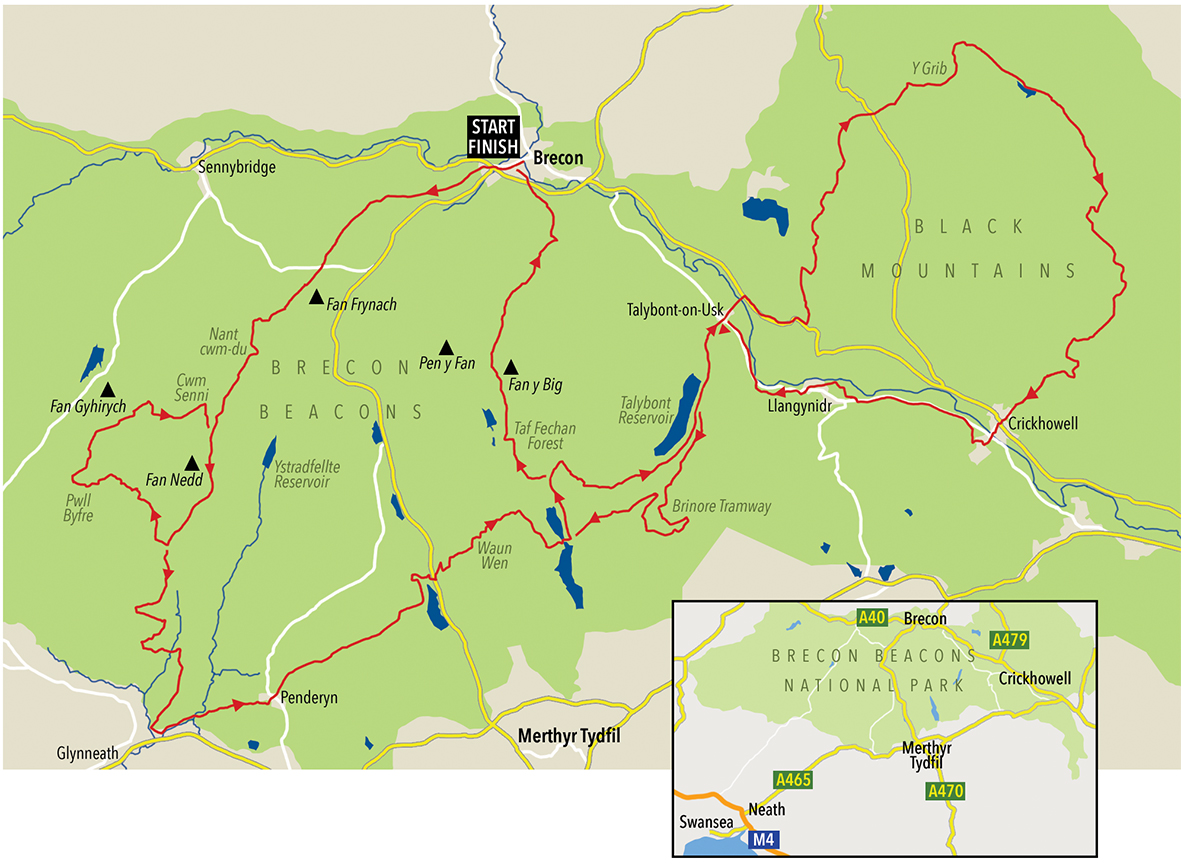 I sit still, very still, listening and watching, feeling the ground under me, soft and warm to the touch, my bike lying like a fallen horse beside me. This secret drawer in which I hunker down is hidden deep within the chest of the Beacons and is my favourite place to eavesdrop, to watch the ebb and flow of the seasons and to connect with the land. The great naturalist and author John Muir said “The Mountains are calling and I must go”. What is this connection with the mountains? Historically they have been a place of refuge, of sanctuary, a place to lose oneself and feel safe. For some though, it is just an urge to get to the top, to place a flag and conquer it, but how can you conquer something that has been there for millennia? For others it is something deeper, a spiritual connection perhaps, somewhere to feel content, a place where you feel you belong. Perhaps it’s neither of those, just simply the joy of being outdoors. 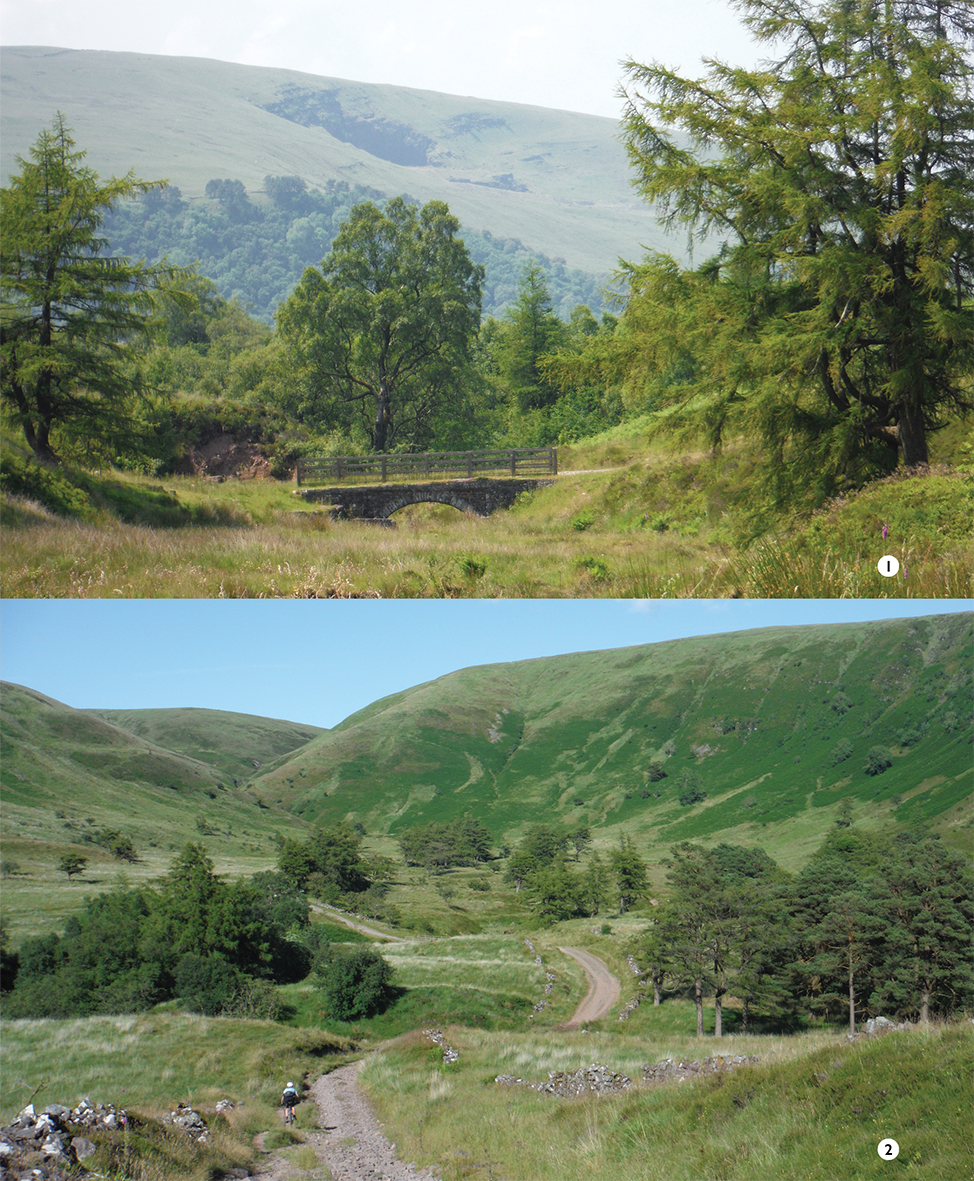 I recently spent some time in the comparatively vast and wild Cairngorms, the Beacons seem so small in comparison, both in size and statue, yet it was here that I learnt to love the land and where I had my first adventures. Lately, I’ve been made redundant and with no work looming on the horizon, I thought I’d take some time to wander the hills and reawaken my love for them, and what better way to facilitate this than by bike? Initially I planned just a few weeks which quickly turned into a few months, and now here I am 6 months later despite the occasional wrestle with my conscience over a beer in The Tap in Brecon, I’m still not working. Whilst it might not come as a surprise to some, I’ve found myself becoming rather a deft hand at procrastination. However depending on your point of view and I must admit I find myself in the minority here; my time hasn’t been wasted as I’ve put together a loop that traverses the hills of South Wales. As I write this I have no idea how long this ride is but I would guess it to be somewhere in the region of 180km. Having said that by the time this goes to print there will be a GPX file available, please contact Bay for details – email Lesley@theswanseabay.co.uk for details.

It wasn’t my intention to create a 2/3 day ride, it just seemed to grow organically but once I had the loop clear in my head, my thoughts were that it would make an ideal bike-packing route – the current industry buzz word for touring off road with your cycle; something The Rough Stuff Fellowship has been doing for the last 60 years or so without feeling the need to put a label on it. However one of the benefits of the bike companies adopting this genre is that it has made some rather wonderful kit available, much of it produced by really talented individuals.

3. Going off the main route alongside Ystradfellte reservoir 4. Climbing towards Fan Gyhirych 5. Below Pwll Byfre

There are lots of places I’d like to have gone with this loop but current access laws prevent this. On our rides we’ve discovered many old roads, some of which are public rights of way, others that unfortunately are not; one particular favourite is the old track that takes you most of the way to Cwm Llwch, a magical spot, nestled in a basin under the steep north side of Corn Du. The dearth of sheep tracks also provide lots of opportunities for some ‘fun’ riding though a little perseverance is required as some just fade to nothing, but if you’re lucky others provide excellent riding. The trick is remembering where they are!

6. Looking north east across the Beacons 7. Above Cwm Senni with Fan Gyhirych 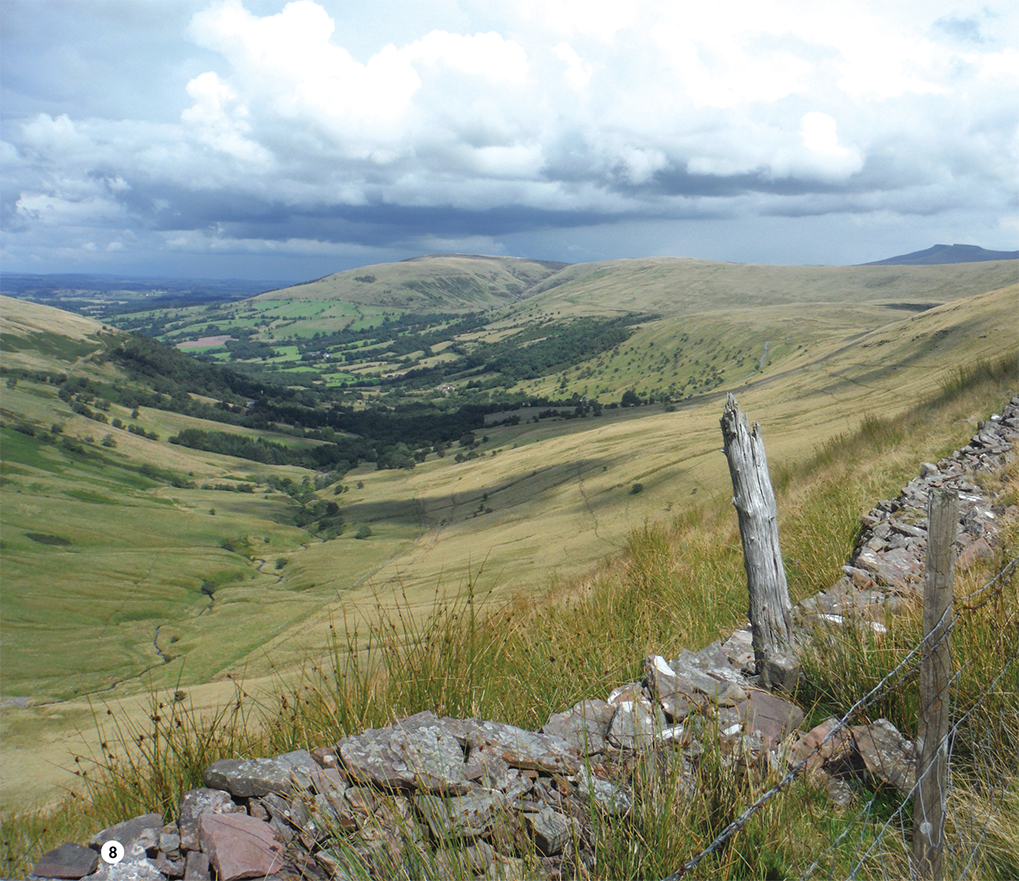 The ridges running north from the central Beacons all offer some exquisite riding; although hard earned, the descents off these tops are an absolute blast. One morning I’d risen early and cycled up onto Fan Frynych, then heading south towards Fan Fawr I picked up a sheep trail which popped me out on the A470 amongst those preparing for what seemed like a massed assault on Pen y Fan. Seeing large groups like this almost queuing to climb a hill dismays me. Surely we should respect this beautiful land not trample all over it like sheeple. Many of those I chatted with had no idea what they were about to undertake and some were ill-equipped for a walk to the shops let alone up into the hills. How many times have you seen people encumbered by shiny new kit yet not having the faintest idea of what to do should it all go wrong? Sometimes nature will flex her muscles and remind us of her power and presence and we should be prepared. But it is remiss of me to be so critical, as one person’s adventure is another’s terror and it is wrong for either to be disparaging of the other; after all, any adventure can be cathartic for the soul and surely that can only be a good thing. 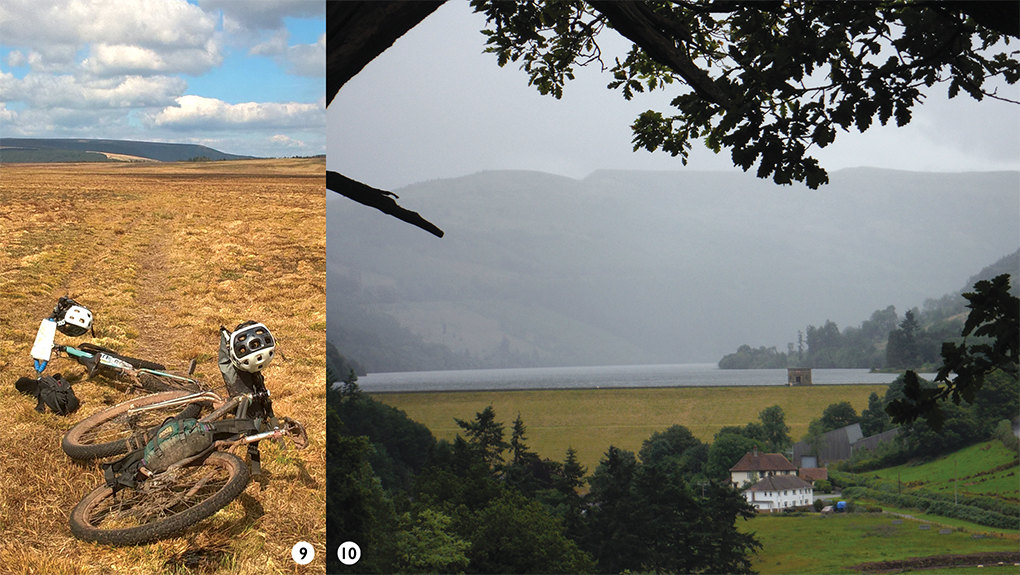 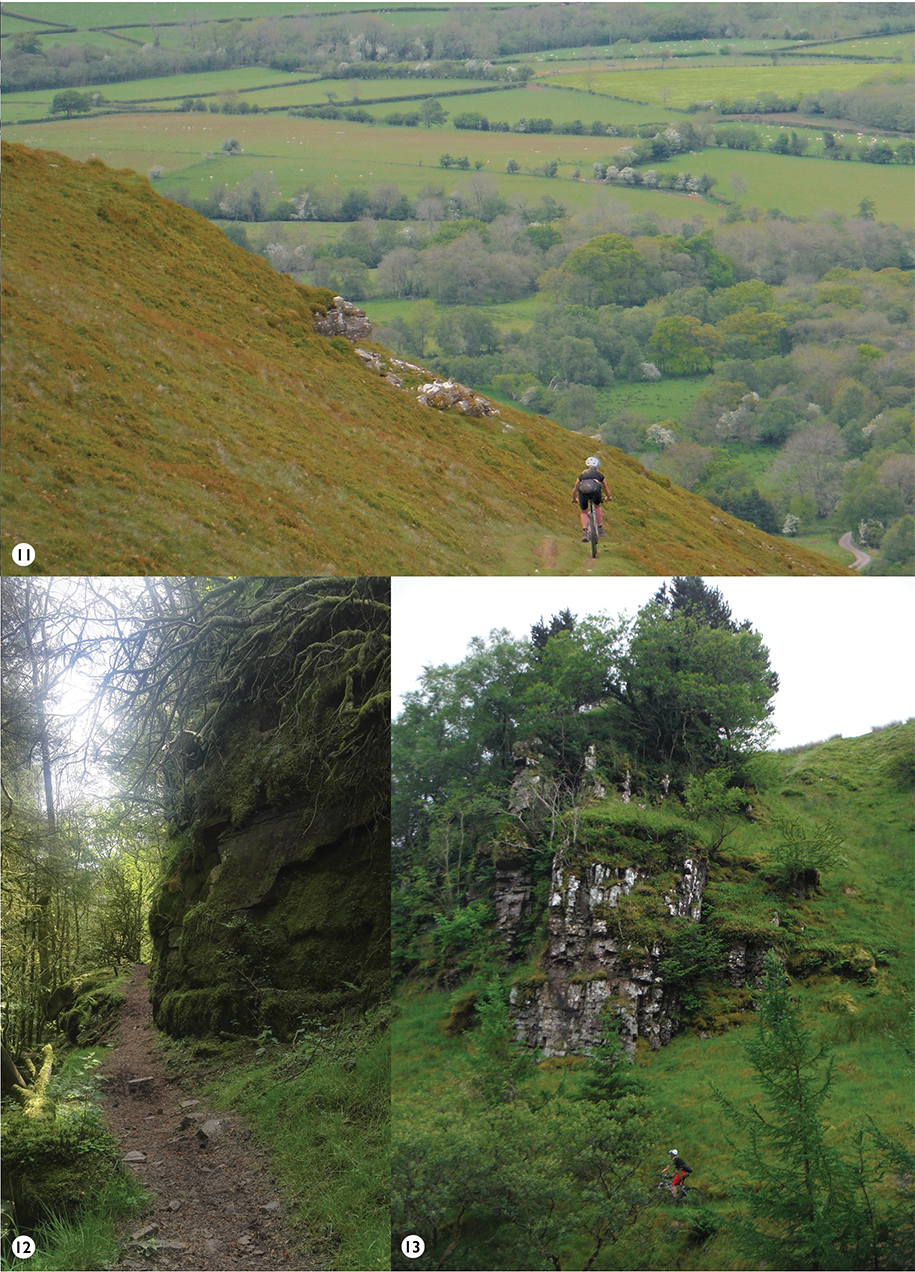 I’ve tried to make this loop all ‘rideable’ but of course here in South Wales if the route is to be any sort of distance this just isn’t possible; I think I’ve come fairly close though (he says sticking his neck right out!) and assuming you’ll ride this with a loaded bike, only two of the climbs will require the use of a different muscle group and one of these is quite short. The one onto Y Grib is a particularly nasty one; it’s a little like drinking Tibetan tea or Kumis for the first time; you’re not sure whether to savour it in the hope you might learn to like it or get it over with as quickly as possible. Whilst we’re on the subject of climbing, there is rather a lot of it, I would imagine it’s somewhere in excess of 4,500mts, but don’t be put off by this as there are some great descents, and to keep things interesting, a few quite technical sections which can prove a little sketchy on a loaded bike, particularly if you’re riding rigid. If you plan to tackle this route it’s certainly worth taking some maps (either OS 160 & 161 or OL12 & 13) as a cursory glance will show some ‘off piste’ alternatives to those I’ve plotted which are often more fun. Also, if you don’t fancy the whole loop, it can easily be split into a series of mini loops. I did think of extending the loop and taking in the Black Mountain, then on to Mynydd Epyntia and Mynydd Myddfai before returning to Brecon from the north, but I’m still wrestling with my conscience at the moment. Watch this space…….

This year I’ve been privileged to have had the time to observe the changing of the seasons; this has been particularly noticeable when revisiting a specific location. It was early summer when I returned to the hanging valley of Cwm Ddu, having not been there since early February, and I was thrilled to see the valley floor littered with the beautiful yellow flowered Welsh Poppy. Though not a common plant and not often seen, it does seem to thrive in this steep glacial valley. I also became aware of how quickly nature replenishes herself; during the early summer hot spell it was almost possible to watch the parched grasses lose their colour, yet within a day of the rains coming, the hills were back to their usual verdant green and once again they felt alive.

14. View of the saddle below Fan y Big 15. On the home straight towards Brecon 16. The Welsh poppy

As always, this loop isn’t all about the riding. Take time to appreciate your surroundings and immerse yourself in the landscape. Close your eyes and imagine what it felt like to be standing where you are now, hundreds or thousands of years ago. It really is a wonderful way to ‘feel’ your surroundings.

17. The last look back before Brecon, of the three peaks of the Beacons – Fan y Big, Cribyn and Pen y Fan

The best bit? This is a difficult one, but if I had to pick one it would be the bridleway that traverses the top of the Dyffryn Crawnon valley. I love this bit of trail and the restoration work done here means it’s now virtually all rideable.

The worst bit? The midges! This summer, they have been particularly vicious. I felt as I do when I’ve given blood on the night of the Solstice when we were visited by clouds of the little beggars.

To answer the question, the track across Waun Wen can sometimes be a bit of a trudge, but worth it, if only for the views it offers.

This is the first time I’ve plotted a route of this length so I would really appreciate your feedback on this one. You can get in touch through Bay editor Lesley on Lesley@theswanseabay.co.uk