Last month we escaped the wet Welsh weather and traded it for more wet weather, but in the Italian lakes. At least it wasn’t cold and the scenery was breathtaking.

Autumn had come early to Northern Italy so it seemed fitting to be eating the sort of warm, filling comfort food associated with the colder weather.

We were staying on Lago D’Orta, one of the smallest of the Italian lakes, but arguably the most romantic.

This is an area that as family, we’ve been going to for over 35 years. Once, we were taken to a lake in the mountains by some Italian friends. They employed a cook to come along with us for the day, and the women were left to prepare lunch while the men went out and did their hunter gatherer bit.

I was tasked with making the carne cruda – these were little balls of minced beef, flavoured with lemon juice and garlic that were filled with a thick tomato sauce. I duly made these little meatballs and set them aside thinking that they would be cooked later – but no, they were served raw. They were in fact quite delicious and similar to steak tartare.

This time I was determined to try one of Italy’s most classic dishes, Milanese Osso Buco – literally translated as ‘bone with a hole’. Made with slices of veal shin, it has a circle of bone which contains the marrow. This is cooked slowly with wine and chicken stock to make a delicately flavoured tender stew, while the marrow enriches the sauce giving it a lovely soft texture. Veal isn’t easy to source, but I understand a lesser version can be made with shin of pork or beef. There appear to be several on-line butchers where you can buy veal direct from the farm – I’ve tried to find a local butcher, but have drawn a blank. If anyone can help me find a local supplier, please let me know.

In my search for Osso Buco I trawled the menus of local Italian restaurants, to no avail. It did however get me in the mood for another taste of Italy, so a trip to Bracelet Bay to Castellamare was called for

Simon and I took our seats at a corner table in the bustling restaurant – the perfect spot for a bit of people watching. There were several family parties going on. One table adjacent to us had four genera-tions celebrating a 90th birthday; the scene was so typically continental.

The little basket of freshly baked bread staved off the hunger pangs while we took in the menus.

Fish featured highly on the ‘specials’ board – something that made me very happy as it’s not something I cook very much at home. 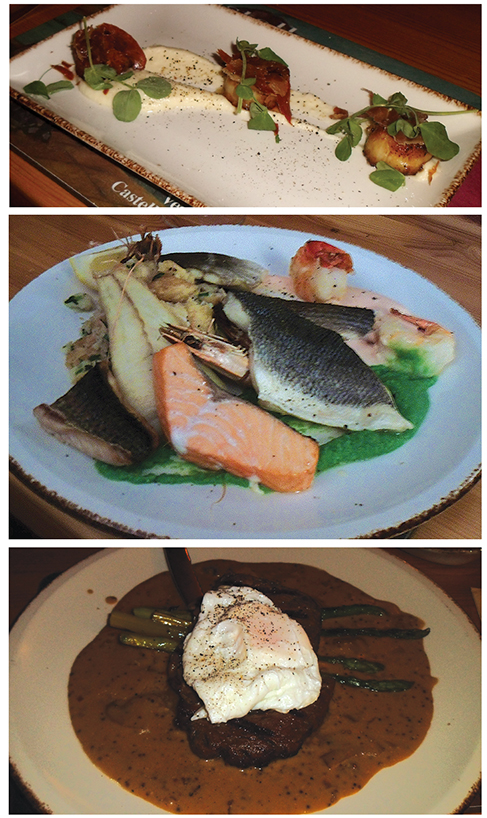 The scallops were served on a cauliflower puree and topped with shards of crispy pancetta. They were soft and perfectly sweet and salty at the same time.

I followed with more fish – a whole platter in fact. King prawns, fillets of mullet and bass and succulent salmon were served with golden chunks of garlicky roasted potatoes.

There are many pasta dishes on the menu – both for starters and main courses. Simon has a penchant for a creamy Carbonara sauce and was alarmed to see that the only pasta Carbonara was on the children’s menu. He needn’t have worried as it was considered the perfect size for a starter.

Rib-eye steak is considered to be one of the most flavoursome cuts of meat. It contains a good amount of fat so bastes itself as it is cooking. This one came with a ladleful of sauce Diane.

Sauce Diane is a mix of meat juices, peppercorns and cream. According to the Larousse Gastonomique it is dedicated to the Roman goddess Diana, the huntress and was originally created to serve with venison.

Whatever its origins it was the perfect sauce to dip the crispy, golden chips into. Castellamare will from now on be my go-to restaurant when I’m in need of a little Italian TLC. 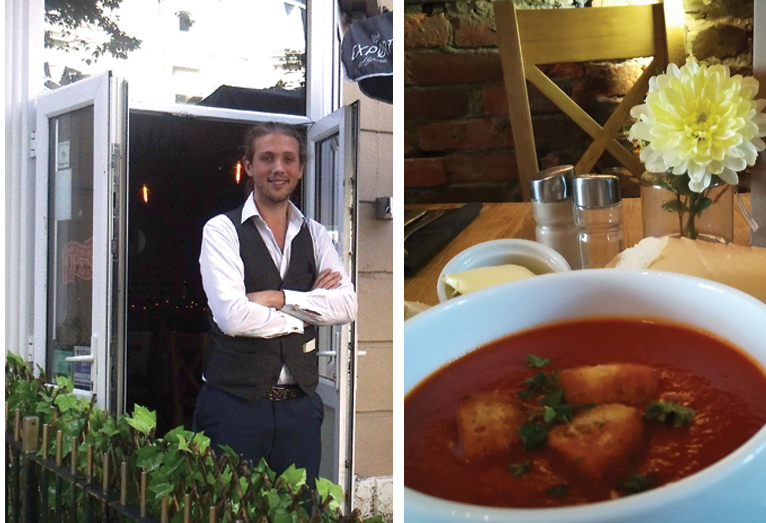 Tucked away on Walter’s Road is a new addition to Uplands eateries.

Once upon a time it was Busy Lizzies then it was home to Garbo’s, now it has a new owner and a new name – The Hat Stand.

Who doesn’t love genuinely home-cooked food? Not the sort of ‘home-cooked’ that is mass pro-duced and marketed as made by your favourite auntie, but the real thing.

As I wandered in to The Hat Stand I was greeted not only by the lovely owner Callum Latham (above), but the smell of soup. I confess to being a bit of a soup dragon. My mother always had a pot of soup on the go – we were never sure what sort it was – it was generally a mix of veget-ables and stock, designed to fill us up. So for me the smell of soup is comforting and homely, and is my go-to winter lunch.

The Hat Stand’s lunch menu may be simple, but it has the sort of reasonably priced meals that are perfect for the many office workers who want a quick break, away from their desks. Stuffed jacket potatoes, salads and hot and cold sandwiches are all on offer – and great coffee to boot.

In the evening it’s tapas time, with a range of large and small plates that are perfect to share with a bottle of wine.

This is a new venture for Callum, who is ably assisted in the kitchen by his father Kevin. If you send and email to Callum at: contact@thehatstandswansea.co.uk you’ll be entered into a prize draw to WIN a bar tab and a bottle of wine.

Look out for our competition next month for your chance to WIN a meal for two.