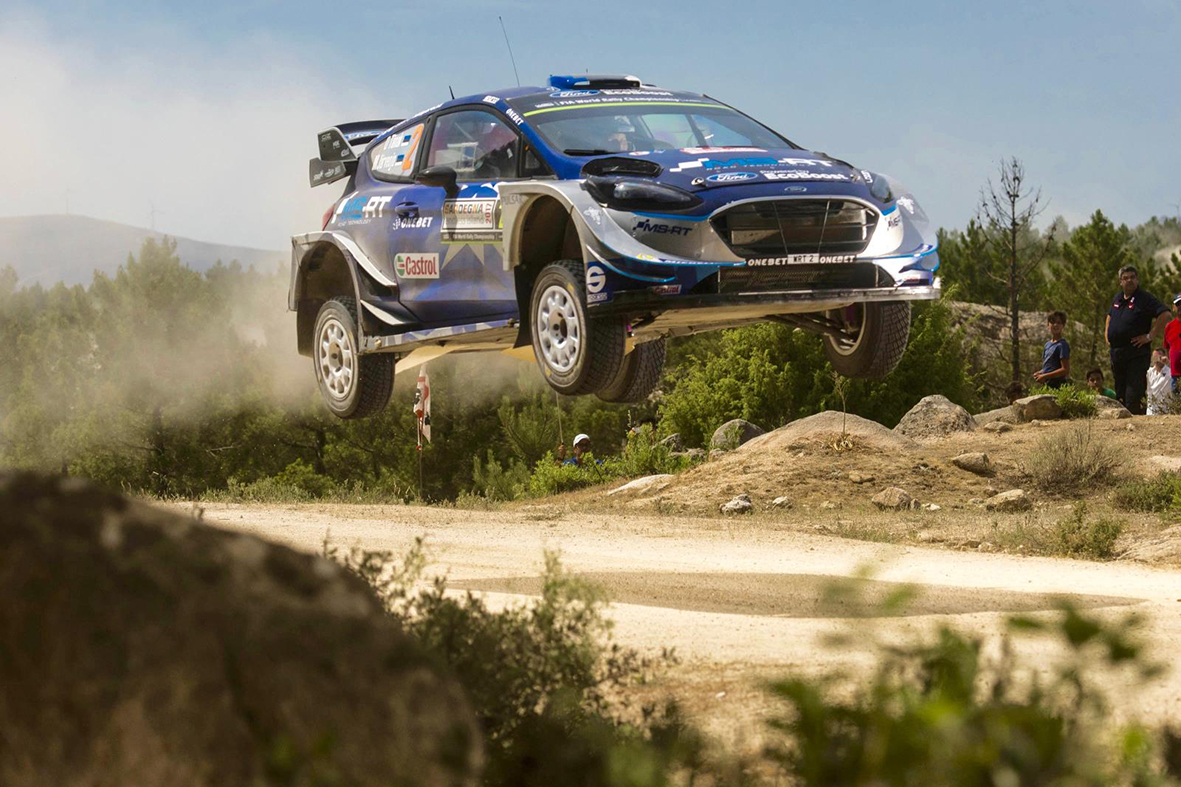 As a dramatic curtain-raiser to four days of thrilling against-the-clock action in the legendary Welsh forests, this autumn’s FIA World Championship event blasts off on Thursday evening (26 October) with a new speed test, staged under the floodlights at Tir Prince Raceway in the seaside resort of Towyn.

The Visit Conwy Tir Prince stage will feature two dramatic jumps. These will see the latest generation of more powerful World Rally Cars flying through the air as hard-charging drivers race to gain an early advantage over their adversaries.

Competitors will first complete one high-speed lap of the Tir Prince trotting track – more traditionally used for horse racing – before tackling a tricky section set out in an adjoining area. Special viewing areas have been created and big screens installed, guaranteeing visitors do not miss any of the high-octane action.

“It’s going to be an absolutely amazing show,” predicted Ben Taylor, Managing Director of Dayinsure Wales Rally GB. “The presence of these incredible WRC cars will bring an altogether different level of horsepower than normally seen at Tir Prince Raceway.”

Full ticket and event information can be found on the official www.walesrallygb.com website and via the event’s social media channels. 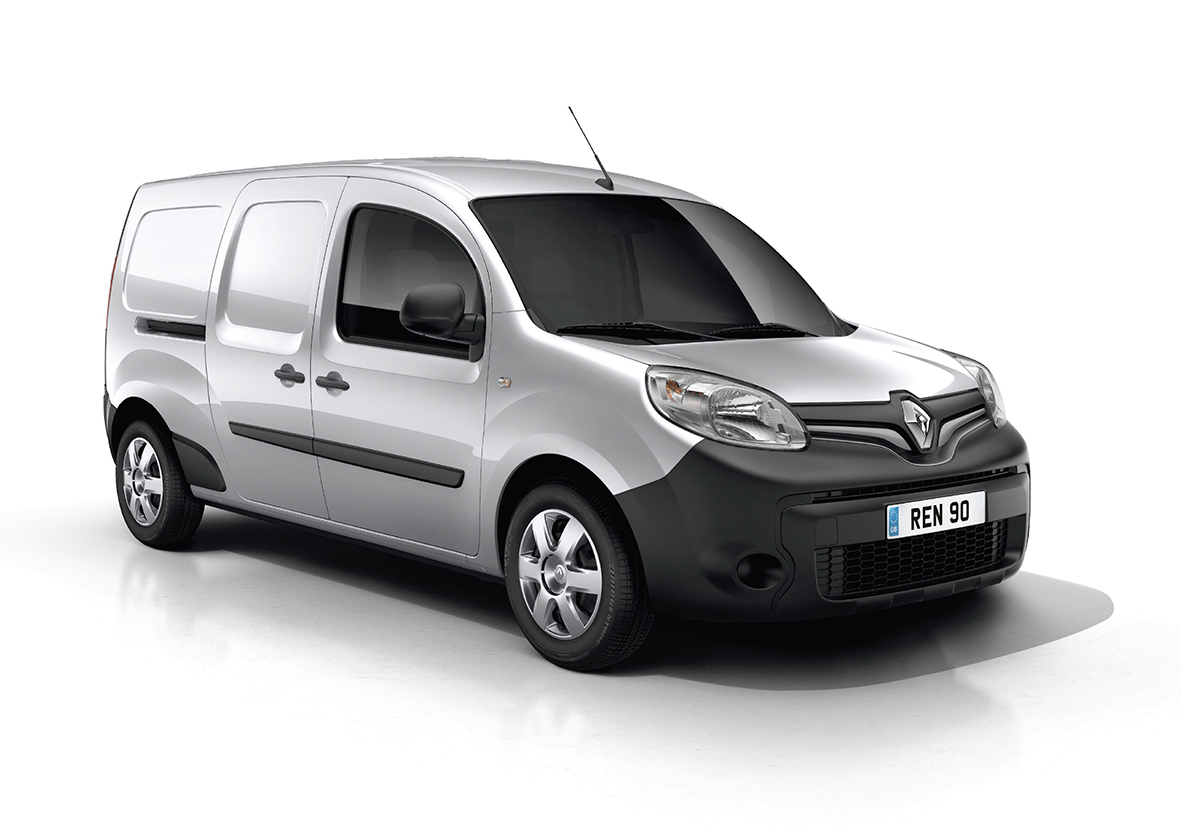 Renault’s Efficient Dual Clutch (EDC) automatic transmission has been intro-duced to the Kangoo range for the first time. The innovative automatic gear-box will be offered with the dCi 90 and dCi 110 versions of Europe’s best-selling van, resulting in a number of benefits for the customer. Orders for the newly available transmission opened on 1st September.

The EDC transmission is already available across Renault’s range of cars, and it offers Kangoo drivers an even more car-like experience behind the wheel. The Kangoo’s cabin features a specially contoured height-adjustable driver’s seat, with added lateral support, coupled with the height/reach adjustable steering wheel and an ergonomically efficient layout for its controls to provide greater comfort.

The six-speed EDC is an automatic dual dry clutch transmission, dispensing with the need for a clutch pedal. The ideal gear is selected automatically by an electronic control unit. Gearshift control is of the ‘P-R-N-D’ type, plus an ‘up/down’ shift mode. A push forward on the gear lever directs the transmission to downshift, a pull backwards to upshift.

The EDC automatic transmission adds 28kg in weight compared with the manual, but the Kangoo dCi 90 EDC achieves fuel economy of up to 55.4mpg on the combined cycle (NEDC) and emits just 136g/km of CO2 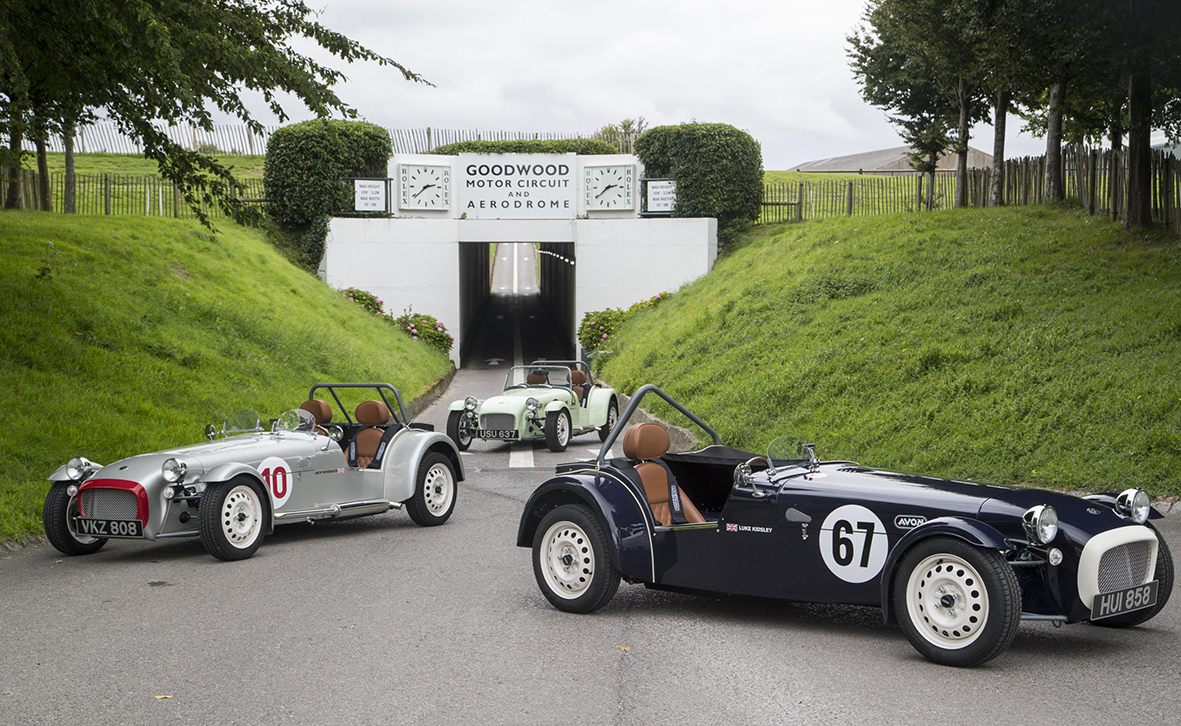 Caterham was in high spirits at the Goodwood Revival last month, as all 60 of its new, retro racer Seven SuperSprints sold out within an incredible seven hours.

The SuperSprint, the second retro Seven unveiled in the last 12 months to mark the Seven’s 60th anniversary year, can now lay claim to be the fastest-selling model in Caterham’s history.

Priced at £29,995 for the 30 cars for the UK, the remaining 30 are destined for Europe. The latest incarnation of the Seven has trumped the Sprint, which sold out in the space of seven days after being launched at Goodwood Revival last year.

David Ridley, Caterham’s Chief Commercial Officer, said: “After last year’s incredible sales result with the Sprint, we were hoping for similar success with the SuperSprint. Having said that, to sell out within seven hours is something we’ve never seen before and it has set a new sales precedent for Caterham. Considering that last year we took orders for over 600 Sevens, the SuperSprint’s success is likely to account for around 10% of our annual sales in 2017 and we are on track to beat last year’s sales record.

“There is quite clearly an appetite for retro styled cars and we’ve tapped into that trend with the Sprint and SuperSprint.

“Having sold all 60, Goodwood’s wet weather far from dampened the mood on the Caterham stand.”

The 60th car was sold by Caterham at 1.30pm on Friday September 8 but Caterham is taking deposits on a waiting list in the unlikely event of a cancellation. 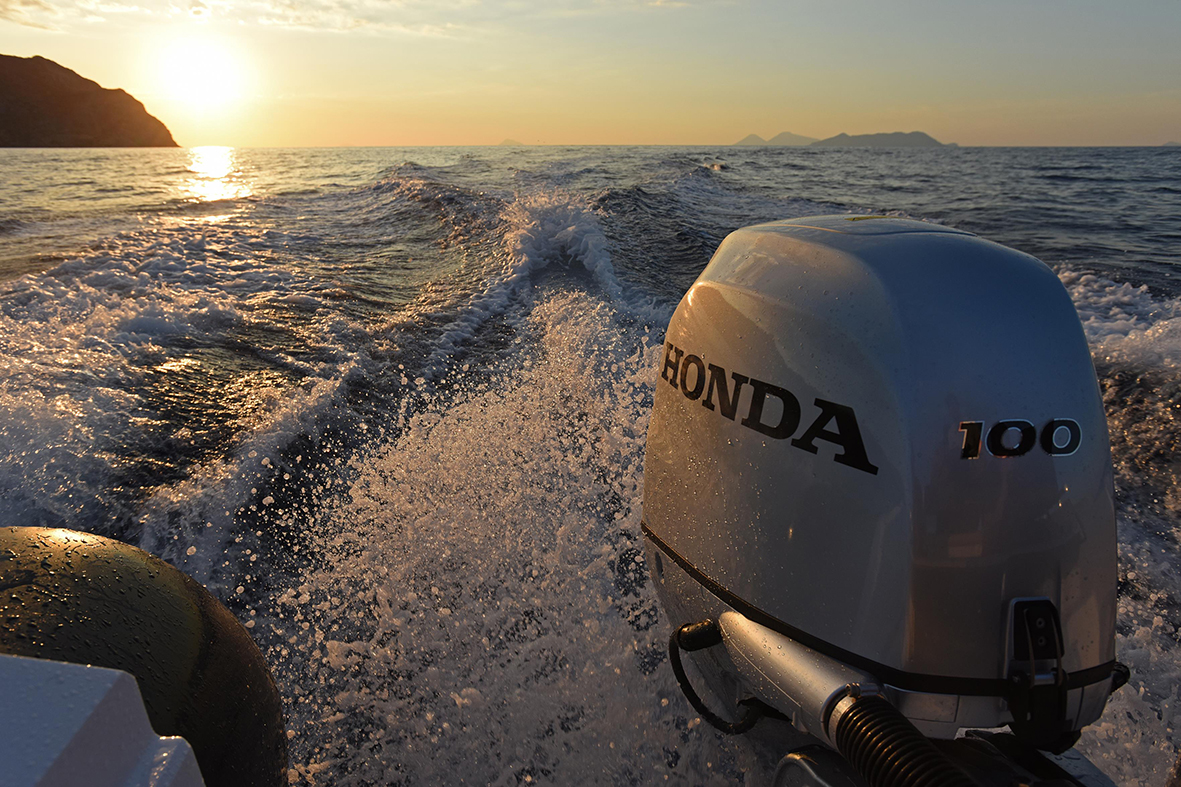 Making their UK debut at the 2017 Southampton International Boat Show, these new mid-range engines are set to reinforce Honda’s reputation for producing quality and reliable outboards designed to meet its customer’s high expectations.

Available to purchase now from an authorised Honda marine dealer, prices at launch remain the same as the outgoing engines with recommended retail prices starting at £5,305 for the BF40, £6,205 for the BF50, £9,355 for the BF80 and £9,655 for the BF100 (all include VAT). They all benefit from Honda’s industry-leading six year domestic and two year commercial warranty, plus, with Honda’s commit-ment to safety, customers will be offered a FREE RYA Level 2 powerboat training course. 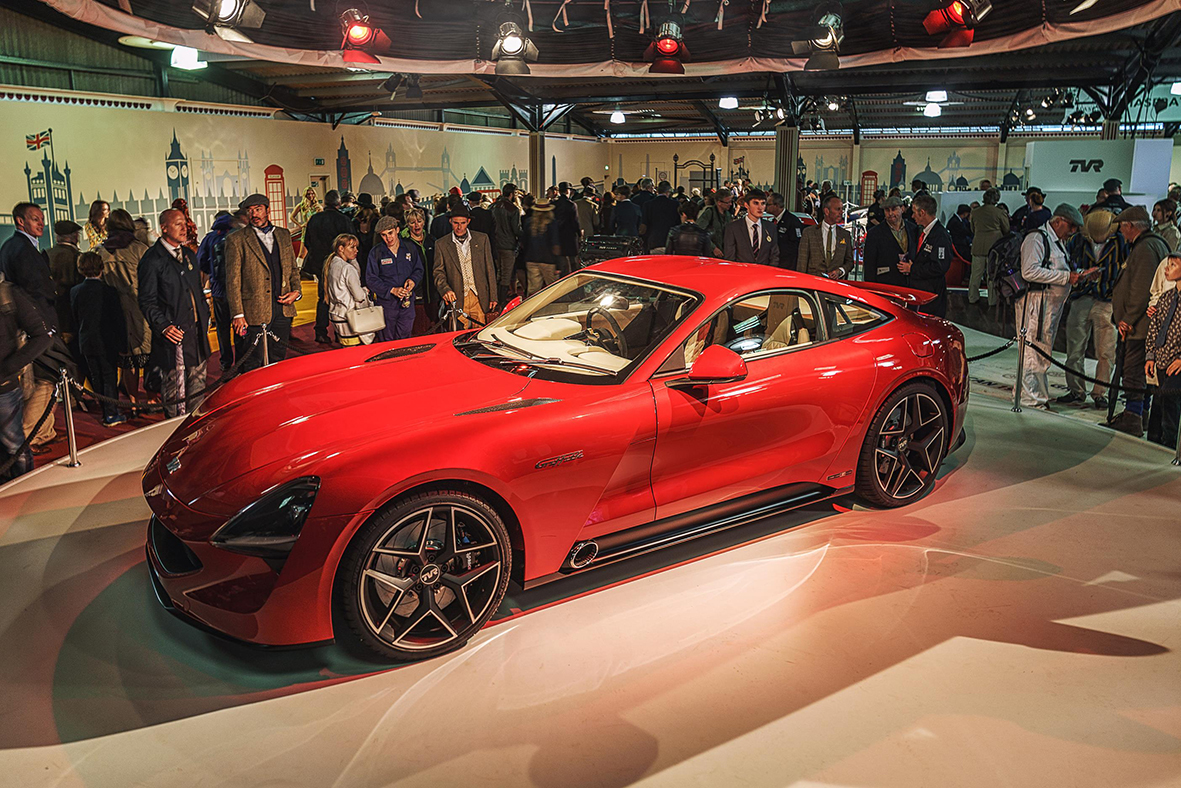 Welcoming a new era in its history, TVR has unveiled its all new sports car, the TVR Griffith, at the Goodwood Revival. Revealed to media and visitors, the Griffith is the first new TVR to be launched since the company was resurrected in British hands.

The new Griffith stays true to the brand’s rich heritage, while employing cutting-edge engineering. The exterior has been designed to be as striking as it is aerodynamically efficient. The timeless sports car silhouette is accented with deep air intakes, generating high levels of downforce and cooling.

Embodying TVR’s long-standing ethos of the Spirit of Driving – the principle of delivering an involving driving interface where the driver will always be fully in control – the new Griffith uses intelligent engineering over electronic driver aids. Only the second front-engined production car to feature a flat floor, the new TVR Griffith boasts a full ground-effect aerodynamic package to ensure that the car remains stable at high speeds and delivers exceptional handling abilities.

Powering the new TVR Griffith is a naturally aspirated 5.0-litre Cosworth-enhanced V8, which enables 400bhp/tonne and is mated to a six-speed manual gearbox. The new TVR Griffith achieves a top speed of more than 200mph, and accelerates from 0-60mph in less than four seconds.

Starting from £90,000, production of the new TVR Griffith Launch Edition will begin in late 2018. 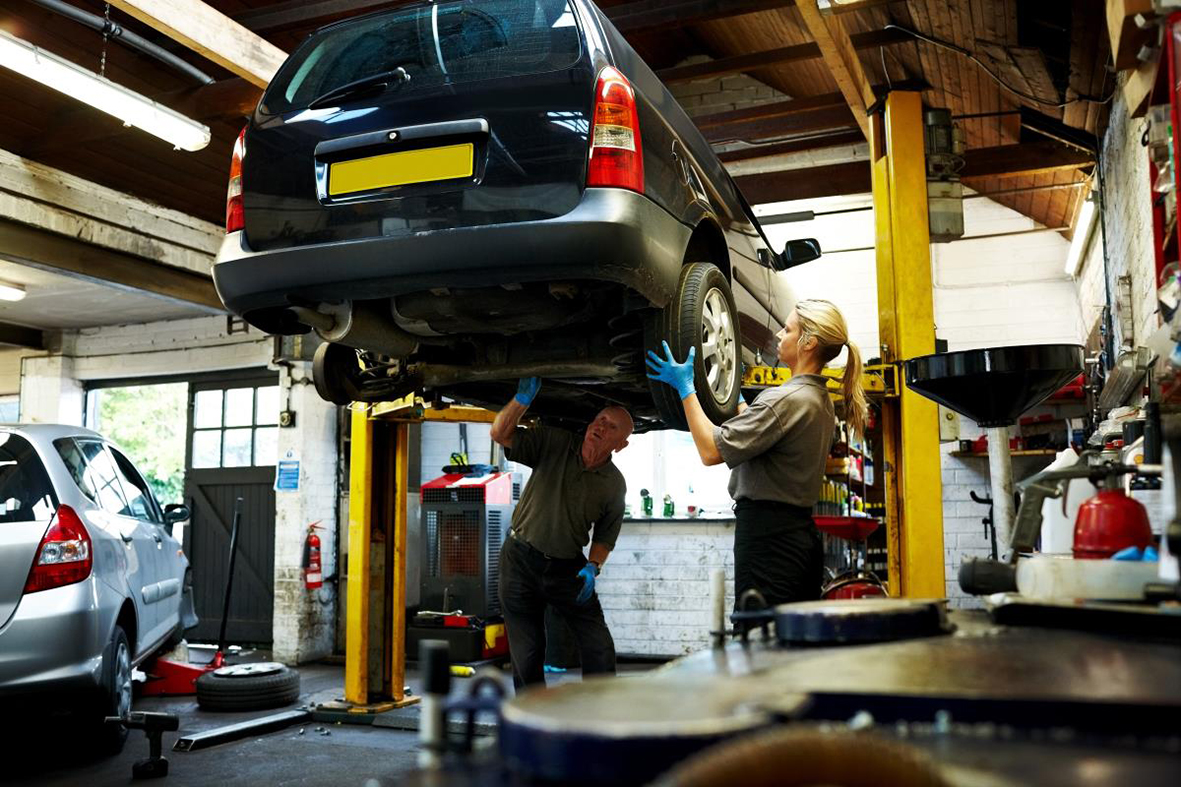 DRIVERS FORGETTING TO RENEW THEIR MOT ON TIME HAVE BEEN FINED OVER £35 MILLION IN THE LAST FIVE YEARS, REVEALS CARBUYER.

A Freedom of Information request to the 45 police forces in the UK found that since 2012 drivers have been hit with 424,316 penalties for driving without a valid MoT certificate. The typical fine for an out-of-date MoT is a £100 fixed penalty notice, which was increased from £60 in August 2013. However, fines can go up to £1,000 if taken to court.

Figures from the 36 police forces able to reply to the FoI request showed forces earn on average £7.5 million a year from MoT fines. The Driver and Vehicle Standards Agency (DVSA) shares its MoT data with the police, who in return use ANPR cameras to fine drivers with out-of-date MoTs.

A Carbuyer poll found a third of drivers said they’d forgotten to renew their current MoT on time, with

15% leaving it over a month overdue.

The money earned from the fines is sent to HM Treasury’s consolidated fund, which the Treasury dubbed the “Government’s bank account”.

Although some dealers offer automatic MoT reminders, there’s no central system in place like there is for Vehicle Excise Duty.

A DVSA spokesman said “We’re currently testing an MoT reminder service where initially vehicle owners can sign up to receive a reminder e-mail at four weeks and two weeks before their MoT is due.”