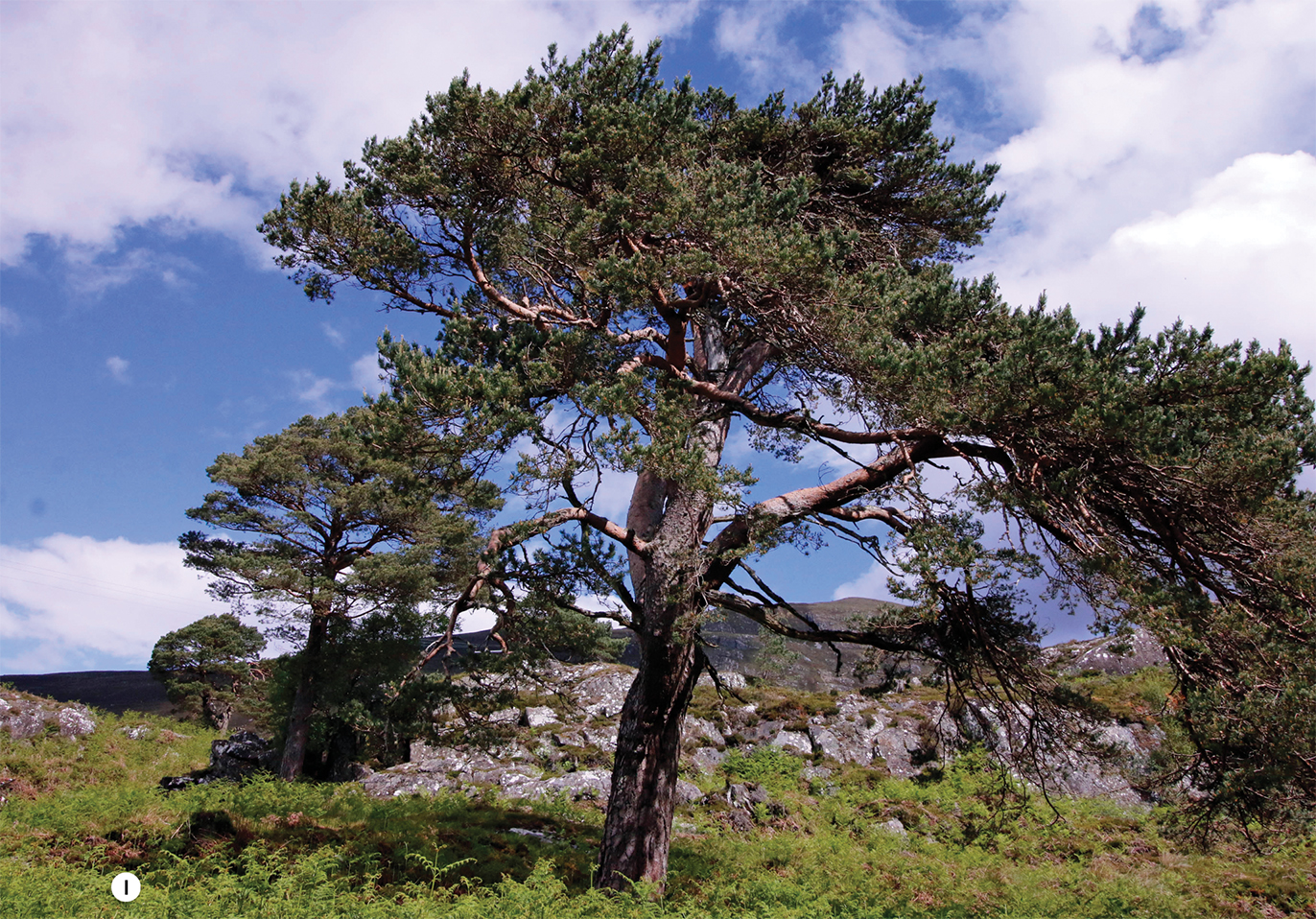 They have been known to reach heights of 46 metres with their roots spreading 16 metres away from the trunk and reaching 8 metres underground. Equally they are able to eke out a living in tight rock crevices, taking 50 years to reach a height of 50 centimetres. Scots pines are true masters of adaptability and endurance, able to thrive in conditions where few other trees survive.

The national tree of Scotland, the Scots pine (Pinus sylvestris) (photo 1) is the only species of pine native to Britain. In Scotland there are still large areas of untouched ancient pine woodland which developed naturally after the last ice age. These woodlands are known as the Caledonian Forest, a unique habitat which is home to a number of species which occur nowhere else in Britain, including the capercaillie and the European crested tit. 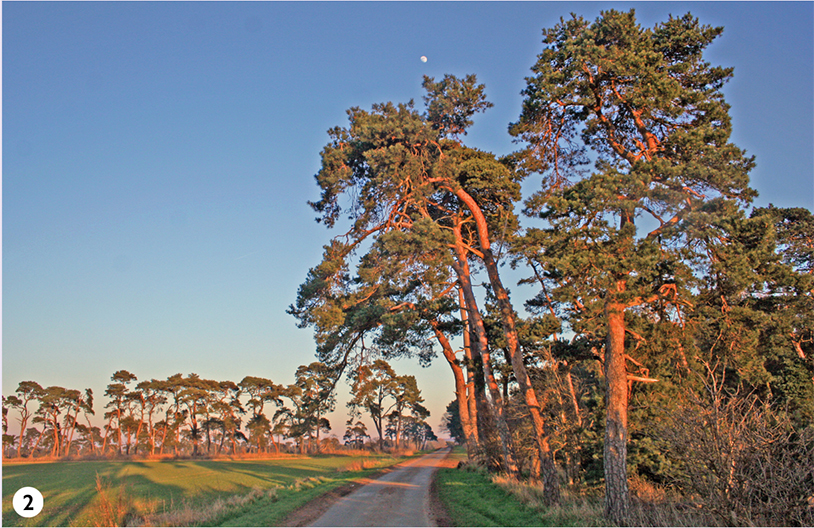 The Scots pine is by no means restricted to Scotland, however. In fact, Scots pines are found throughout most of Britain and are widespread throughout the northern parts of Europe and Asia as well as mountainous regions further south. Many of the Scots pines in England and Wales have been planted, such as the famous pine lines in the Brecklands of East Anglia (photo 2). These were originally planted as hedges in the early 1800s but have since grown into imposing rows of mature trees.

Scots pines can cope with poor soils and climatic conditions that few other trees can endure, but their Achilles’ heel is that they require a lot of light. As a result, in situations where growing conditions are favourable enough for tall broadleaved trees to thrive, Scots pines are either unable to establish themselves, or they quickly weaken and die out as they are progressively shaded by their competitors.

Scots pines are widely grown for their timber, which is one of the strongest softwoods on the market and which is used for a wide range of purposes. It is particularly popular in construction, for furniture, telegraph poles, pit props, gate posts, fencing and paper pulp. Timber trees are usually planted close together in same-age monocultures to encourage them to grow up towards the light and develop the uniform, tall, straight trunks valued by the timber industry (photo 3). As a result, little light reaches the forest floor. In addition, a thick layer of dead needles and twigs prevents most groundcover plants from establishing, making pine plantations rather sombre and uninviting places, both for wildlife and humans, a stark contrast to the atmospheric Caledonian Forest with its understorey of small shrubs and rare wildflowers. 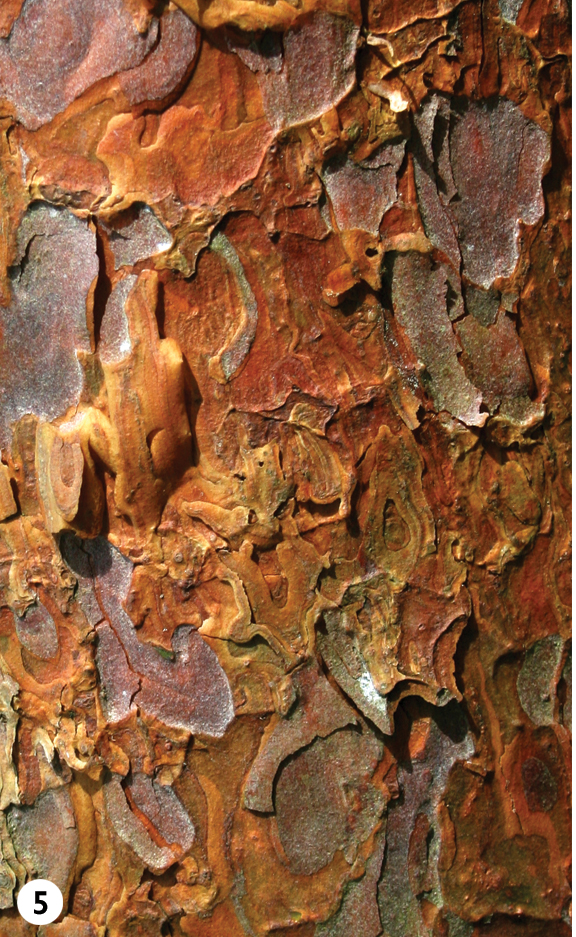 Scots pines are one of the easier conifer species to identify. Mature Scots pines, assuming they were given enough space, often have a distinctive outline with their spreading branches and often asymmetrical crowns. Their leaves (usually referred to as ‘needles’ due to their elongate shape and tough texture) are attached to the tree in pairs. They are blue-green and relatively short for a pine, typically less than 5 cm in length, and are usually twisted once around their axis between base and tip (photo 4).

The bark is also a useful identification feature, because the younger bark near the top of mature trees is an unusual and characteristic shade of foxy red and tends to peel off in thin flakes (photo 5). Older bark becomes darker and develops deep fissures. 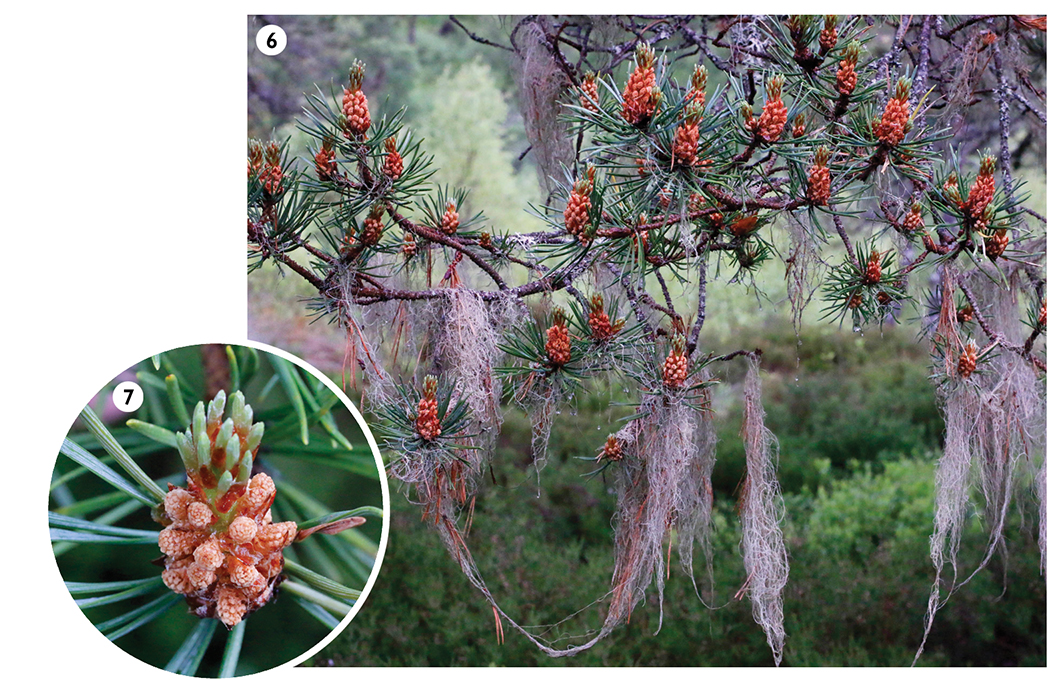 Scots pines are wind-pollinated and flower in late spring, when the pollen-bearing male cones (photos 6 & 7) release large quantities of pollen that can often be seen quite clearly when the branches are shaken. The tiny, reddish, female cones are considerably less conspicuous, although they are borne on the very tips of the most vigorous young shoots (photos 8 & 9). 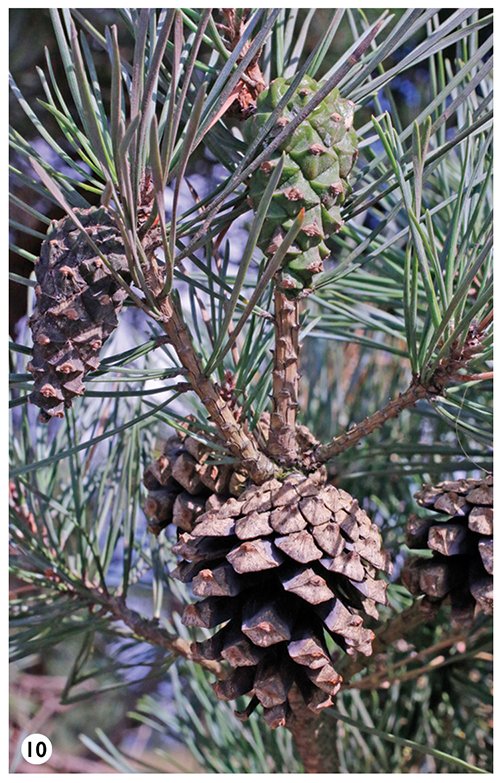 After pollination, the female cones take almost two years to transform and grow into first immature green and later mature brown cones (photo 10). After their second winter, the cones start to open slightly during dry weather and liberate their first seeds, only to close up again during the night and in wet weather. This process is repeated many times over several weeks, spreading the release of the winged seeds over a prolonged period and so increasing the chances of favourable conditions for the dispersal of at least some of the seeds. Scots pine seedlings cannot survive in the shade of their parent tree, and so the seeds need to make it at least as far as the nearest clearing in order to be in with a chance of growing into a mature tree them-selves. Seeds typically settle between 50-100 metres away from their parent tree, but in snow-covered landscapes they have been known to cover distances of several kilo-metres, carried across the smooth, frozen surface by the wind. 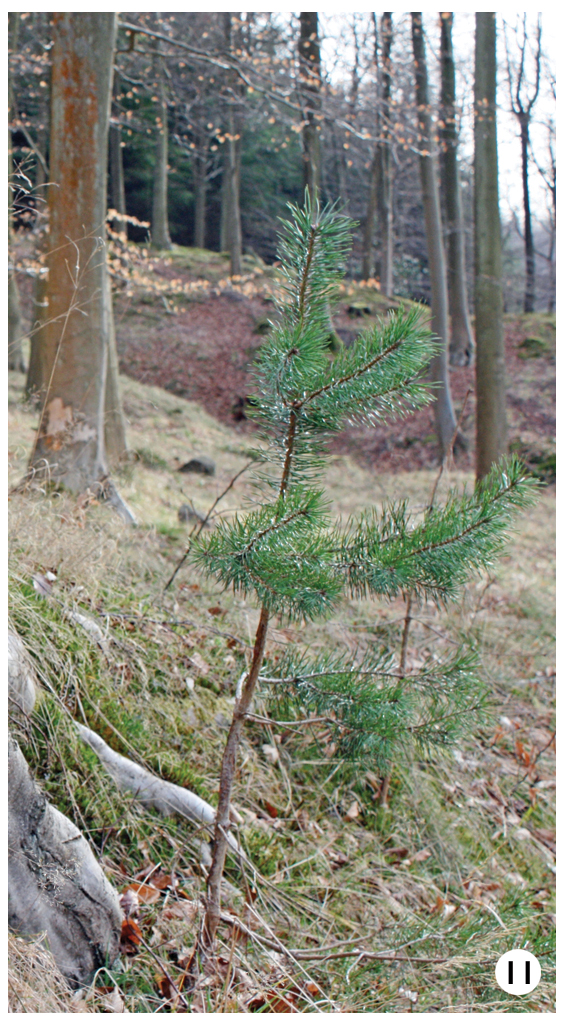 Scots pines produce vast quantities of seeds. A 100-year-old tree can produce as many as 1600 new cones a year, which can lead to a seed production of up to 1000 seeds per square metre in a Scots pine forest in its most productive years (so-called ‘mast years’, which occur at 3-10 year intervals). Even in the intervening years Scots pines produce considerably more seeds than most deciduous trees, a fact which many animals take advantage of, particularly the crossbills, finches which specialise in feeding on conifer cones, and many of which have a particular fondness for pine seeds. The Scottish crossbill (Loxia scotica) was recently found to be a species in its own right rather than a subspecies of either of the other two British crossbill species. The Scottish crossbill lives and breeds exclusively in Scotland, particularly in the Caledonian Forest, making it the only species of bird endemic to Britain, found nowhere else in the world.

Those lucky Scots pine seeds that manage to escape the hungry mouths and germinate in a favourable spot soon grow into elegant saplings (photo 11). Young pine trees can be aged fairly reliably by counting the whorls of branches on their trunk, as each year only one whorl is formed.

Most Scots pines grown for timber are felled at ages of between 60 and 80 years. If they are not cut down in their prime, however, Scots pines can live much longer, regularly reaching ages of around 300 years and occasionally living longer than 700 years, particularly in the coldest parts of their range. The oldest Scots pines growing in Scotland today are estimated to be at least 500 years old. Ancient Scots pines can take on beautiful, gnarled shapes and are able to bestow a unique air of mystery and timelessness on a landscape in a way few other trees can (photo 12). 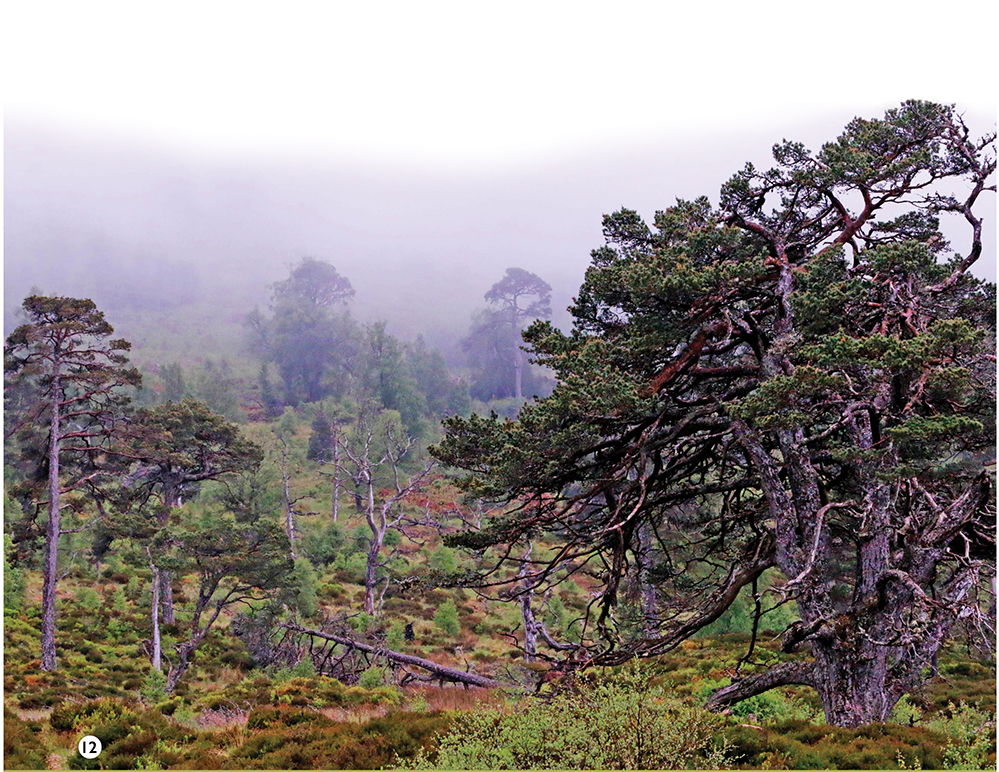