At a time of year when most insects are winding down for the season, the larvae of some of Britain’s most attractive and distinctive beetles are busy developing deep in their wooden tunnels, readying themselves for their short appearance as adults once warmth and sunshine return.

Although there is considerable variation in body size, colouration, and length of their distinctive antennae, the majority of adult longhorn beetles are still easily recognized by their typical narrow body shape paired with their long, elegant antennae. Longhorn beetle larvae are pale, soft-bodied, and are rarely seen because they grow and develop entirely within tunnels they excavate in living or dead wood, where they are safe from most predators except their particular nemesis, the woodpecker.

Longhorn beetle larvae can take up to 4 years to develop on their hard-to-digest diet of fibrous wood, but a few species manage to complete their life cycles in as little as 1 year, most notably the small and elegant Umbellifer Longhorn Beetle (Phytoecia cylindrica) (photo 1) and the Golden-bloomed Grey Longhorn Beetle (Agapanthia villosoviridescens) (photo 2) with its remarkable striped antennae. These two species are in a particular hurry during their time as larvae because – unusually for longhorn beetles – they develop inside the woody stems of perennial plants rather than in the firmer wood of trees, and these stems rot within a single year. The larvae of most of the other 66 British longhorn beetle species inhabit the living or decaying wood of trees (depending on species) and so have more time to complete their development. 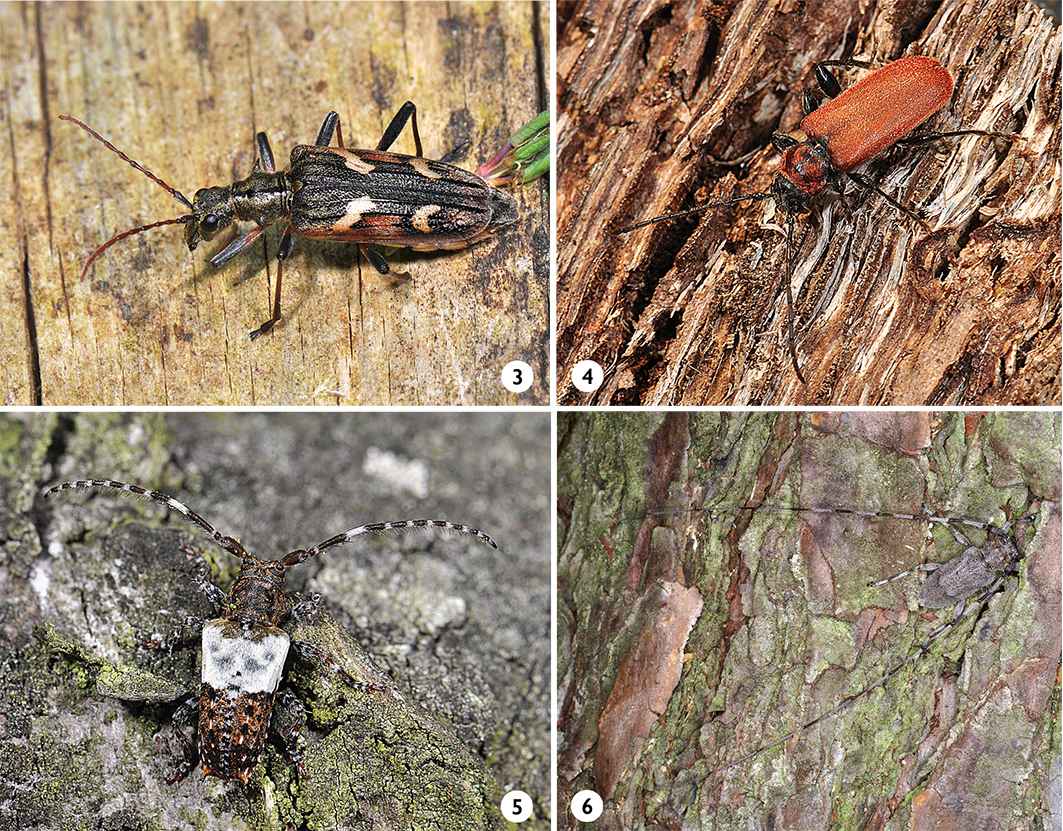 Some species, such as the fairly frequently encountered Two-banded Long-horn Beetle (Rhagium bifasciatum) (photo 3), are not very particular in their choice of larval food source and are happy to utilize the wood of a wide range of tree species. Others, such as the much rarer, velvety-looking Welsh Oak Longhorn Beetle (Pyrrhidium sanguineum) (photo 4), have a distinct preference for a particular type of wood, in this case the decaying wood of oaks.

The Greater Thorn-tipped Longhorn Beetle (Pogonocherus hispidulus) (photo 5) which – despite its name – measures just 5-8 mm, is so small that it requires only dead twigs for its development. It often chooses apple, holly or ivy twigs for this purpose. It is beautifully camouflaged and is easily mis-taken for a small bird dropping or a speck of lichen when it is resting on bark.

The Timberman Beetle (Acanthocinus aedilis) (photo 6), which is mainly found in the ancient Scottish pine forests, is perhaps even better camouflaged. Males of this species have antennae that are up to five times the length of their bodies and can span 6 inches from tip to tip. The females’ antennae are rarely longer than twice their body length. Male Timberman Beetles use their exceptional antennae to find females, and both sexes are able to locate freshly fallen or cut pine wood, their main larval food source, with the aid of their antennae. 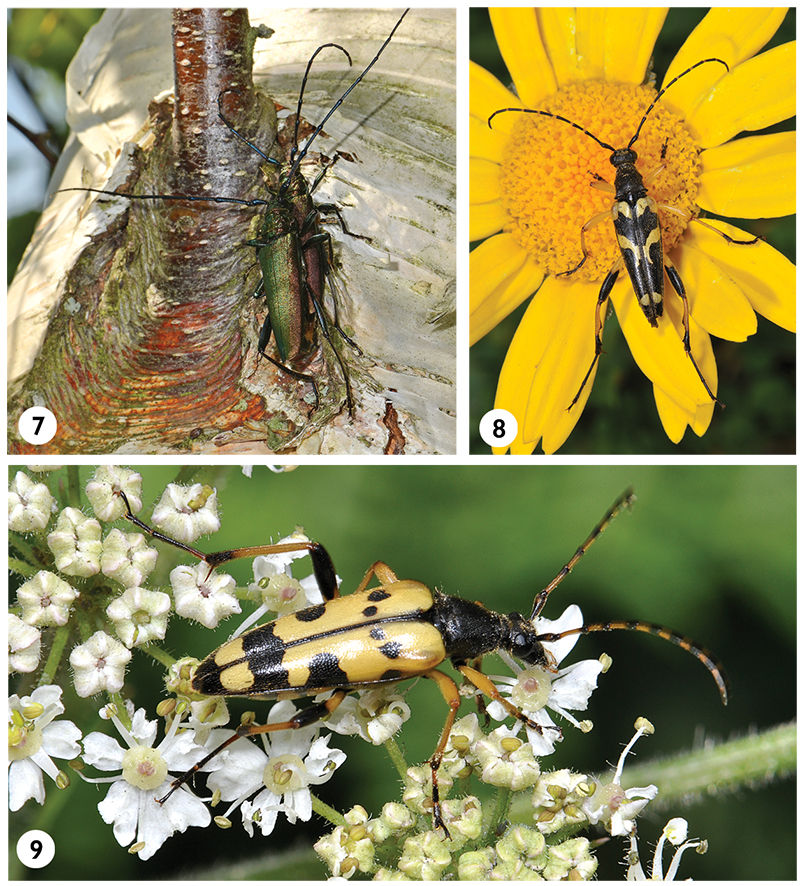 Musk Beetles (Aromia moschata) (photo 7) are also in possession of rather impressive antennae. It is, however, the combination of their large size (up to 35 mm), metallic green colour and their ability to emit a strong musky odour when disturbed which makes them quite unmistakeable. Musk Beetle larvae develop in living wood of various willow species and, as a result, adults are often found in wet areas where willows thrive.

Not all longhorn beetles rely on camouflage to keep safe. Several species use very convincing mimicry to fool predators into thinking that they are dangerous or unpalatable.

The most common of these is the Black-and-yellow Longhorn Beetle (Rutpela maculata) (photo 8). Its larvae develop in the decaying wood of a range of deciduous trees and occasionally pine. As is the case with many other adult longhorn beetles, Black-and-yellow Longhorn Beetles can often be seen feeding on flowers, with bramble and umbellifers being particular favourites (photo 9). The patterning in this species is subject to considerable variation. The most common pattern is that shown by the individual in photo 9. Other varieties, such as the darker and more banded pattern of the individual in photo 8, are less frequently seen. 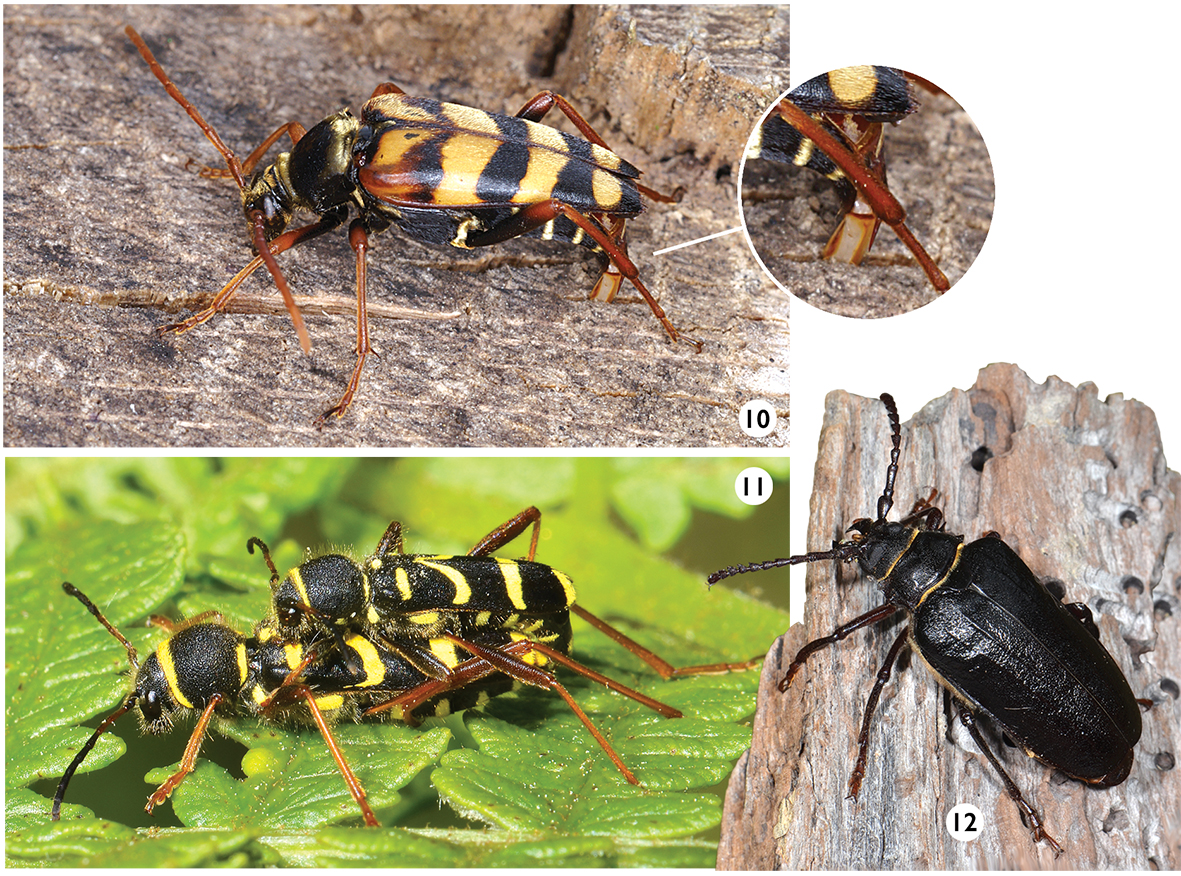 Another, much rarer, beautiful mimic is the Golden-haired Longhorn Beetle (Leptura aurulenta) (photo 10). It, too, develops in the dead wood of deciduous trees, particularly oak. Like many longhorn beetles, female Golden-haired Longhorn Beetles possess a strong ovipositor which allows them to place their eggs safely beneath the surface of their chosen nursery logs or stumps. The female shown in photo 10 is in the process of egg-laying.

Perhaps the brightest of the mimics is the aptly named Wasp Beetle (Clytus arietis) (photo 11). It is quite frequently encountered in woodlands, feeding on flowers or investigating potential egg-laying sites including log piles. It is not fussy in its choice of larval food source and utilises the decaying wood of a range of deciduous trees. The Wasp Beetle not only possesses the colourings of a wasp, it also very successfully emulates a wasp’s fast and jerky movements.

The Tanner Beetle (Prionus coriarius) (photo 12) – at up to 45 mm body length the largest British longhorn beetle – is much less sprightly, though it is still very fleet of foot compared to other beetles of a similar size, such as female Stag Beetles. This impressive, rare beetle is not often encountered even in areas where it is known to occur, because it is largely nocturnal and well camouflaged. Like many long-horn beetles, the Tanner Beetle can generate rasping sounds, which are clearly audible as a result of its large size. These sounds are primarily produced when the beetle is disturbed, as well as during copula-tion. It possesses strong mandibles and has been known to draw blood in defence when restrained.

While British longhorn beetles, including those that feed on living wood, do not usually do any serious harm to trees or timber, several exotic longhorn beetle species are able to cause significant damage and are known as pest species in their countries of origin. Exotic longhorn beetles are accidentally import-ed quite regularly, hidden within timber as larvae or pupae which subsequently emerge as adults in Britain. Most are unable to reproduce outside their home range, but the Asian Longhorn Beetle

(Anoplophora glabripennis) and the very similar Citrus Longhorn Beetle (Anoplophora chinensis) are considered potentially invasive pest species, and strict regulations are in place to prevent them from becoming established in Britain. These two species are rather attractive, with black and white (or pale blue) banded antennae and bodies which are shiny black with bright white dots and speckles, reminiscent of a clear night sky. Luckily this means they are quite different in appearance from all the native longhorn beetles, so that the latter are not in danger of being accidentally killed in cases of mistaken identity.

As a result of their close association with trees and dead wood, most species of longhorn beetles are only rarely seen in residential gardens, and visits to woodlands or at least large parks are generally necessary to come across these beautiful beetles. Once encountered, they are, however, rarely forgotten, so making the effort is definitely worthwhile!