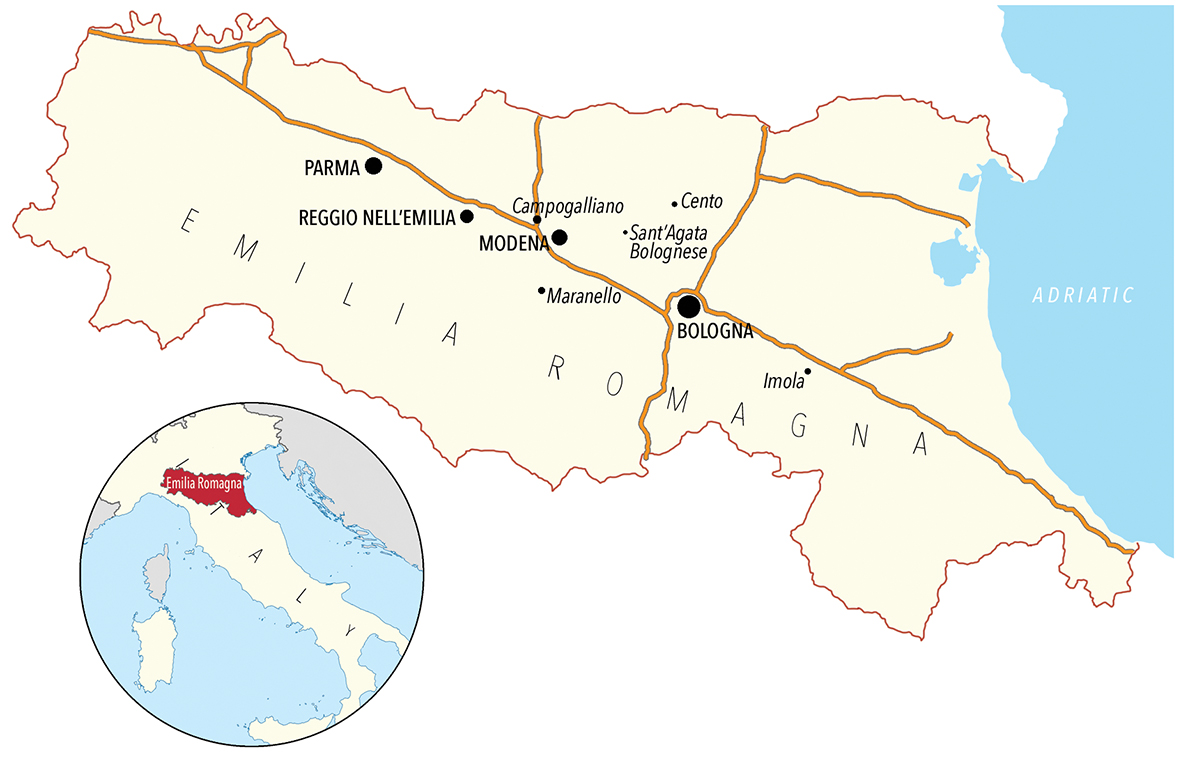 LIAM’S VACATION WAS A BIT OF BUS-MAN’S HOLIDAY. NOT THAT YOU WOULD COMPARE THE ITALIAN MOTORING CLASSICS WITH A BUS – FAR FROM IT.

The Pope was in Bologna whilst I was there in early October, so too was the UEFA cup. On Sunday 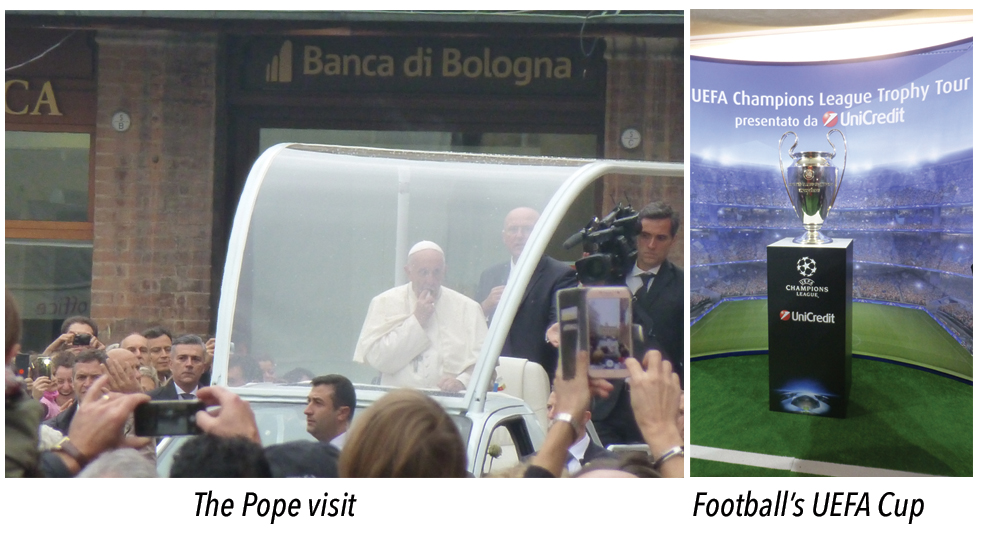 morning I joined the crowds in Piazza Maggiore and caught a glimpse of the man the locals call Papa Francesco, and on Wednesday I joined the queues in the Royal Carlton Hotel and took a quick snap of the imposing silver trophy.

Why I’m not quite sure. As someone whose knowledge of the Roman Catholic Church runs to little more than a few episodes of Father Ted and whose knowledge of football runs to just the opening bars of the Match of the Day theme tune (I’ve usually turned over by the time the jug-eared and perma-tanned presenter comes on). I just went along to see the spectacle of it all. As I expected, in both cases – and to paraphrase Pink Floyd’s Home Again – “The tolling of the iron bell called the faithful to their knees to hear the softly spoken magic spell”. I’m such a cynic. I guess there’s a bolt of lightning out there somewhere with my name on it.

Nevertheless there was more than just an element of personal pilgrimage to my autumnal visit to the region of Emilia Romagna. Not only is Bologna the food capital of Italy – honestly, the food… Oh the food! … – it also sits right in the heart of what’s known as Motor Valley. The fact that Bologna is little more than a 2 hour flight from Manchester or Heathrow is a bit of a bonus too. 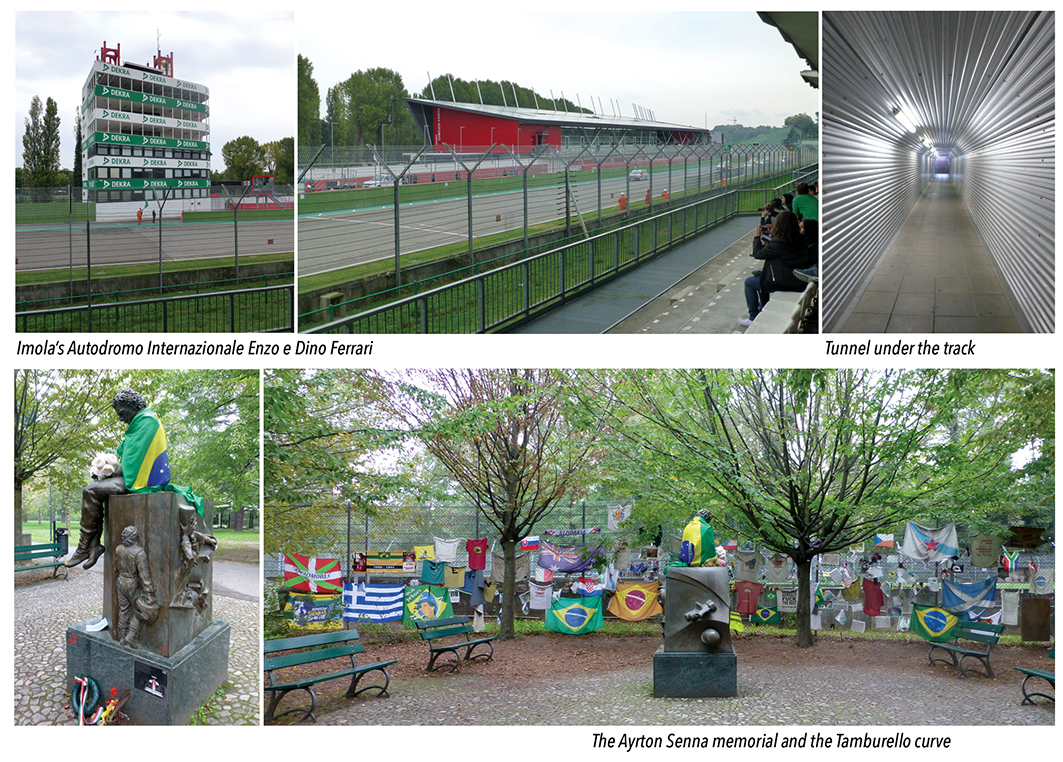 The real exploration was planned for Monday but once the Pontiff had given his blessing I head-ed straight for the railway station. Just 25 minutes south of Bologna lies the pretty, and pretty peaceful, town of Imola. On a Sunday mid-autumn afternoon it’s virtually silent, but between 1981 and 2006 Imola hosted the San Marino Grand Prix; you must have been able to hear the racing cars as soon as you stepped off the train. Imola is also the place where in 1994 the racing world lost both Roland Ratzenberger and triple Formula 1 world champion Ayrton Senna.

Sadly poor Roland seems to have been some-what forgotten, but if you first find the tunnel that goes under the track (just imagine who has walked through there!) and then make your way from the starting grid towards the Tamburello curve, between the trees there’s a memorial to Senna more or less directly opposite where his Williams FW16 left the track. Judging by the flags and fresh flowers that surround the bronze statue it’s a place that’s still regularly visited by those who remember vividly watching the events unfold on the most tragic of race weekends in 1994.

A moment or two of quiet reflection and it’s time to catch the train back to Bologna, choose a place for dinner and plan Monday’s excursion out of town. 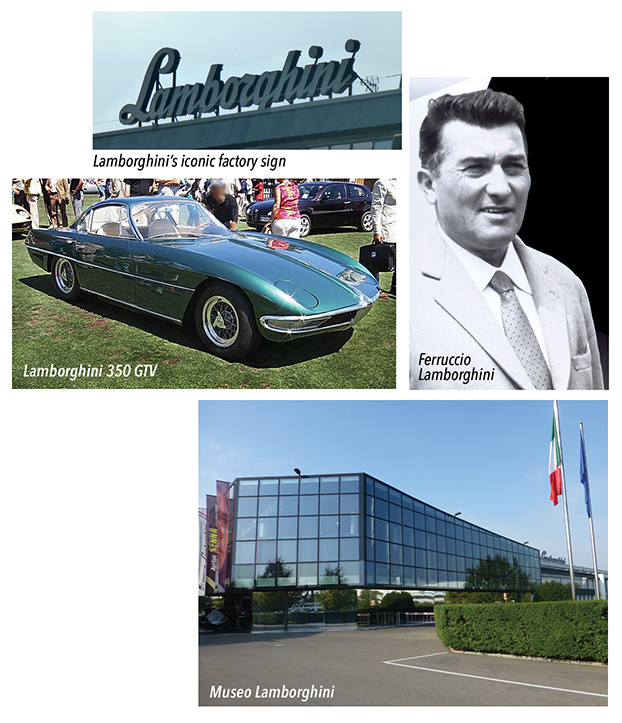 Imola of course is not the only corner of this region to have resonated to the sound of multi-cylindered engines. In 1963 a wealthy tractor and factory heating system manufacturer by the name of Ferruccio Lamborghini (right) bought a piece of land in Sant’ Agata Bolognese, about 20 miles North West of Bologna, out on the Po Plain. Sant’ Agata Bolognese lies on the route Ferruccio would have taken between his tractor factory in Cento and the Ferrari factory in nearby Maranello.

If motoring folklore is to be believed Mr Lamborghini was disappointed with the quality of the clutch in his newly purchased Ferrari, and being a mechanically minded man often took to repairing it himself; rumour has it that he eventually replaced the clutch with one from one of his tractors.

Exasperated by having to reach for the spanners once too often, he took his complaints right to the top and confronted Enzo Ferrari directly. Needless to say Enzo Ferrari didn’t exactly appreciate being given technical notes from someone he considered to be a young up-start tractor manufacturer and told Mr Lamborghini as much. Driven by Enzo’s insult, Ferruccio was inspired and soon got to work designing his own car. The Lamborghini 350 GTV, a direct rival to the Ferrari’s of the time, was unveiled at the Turin Motor Show in October 1963. 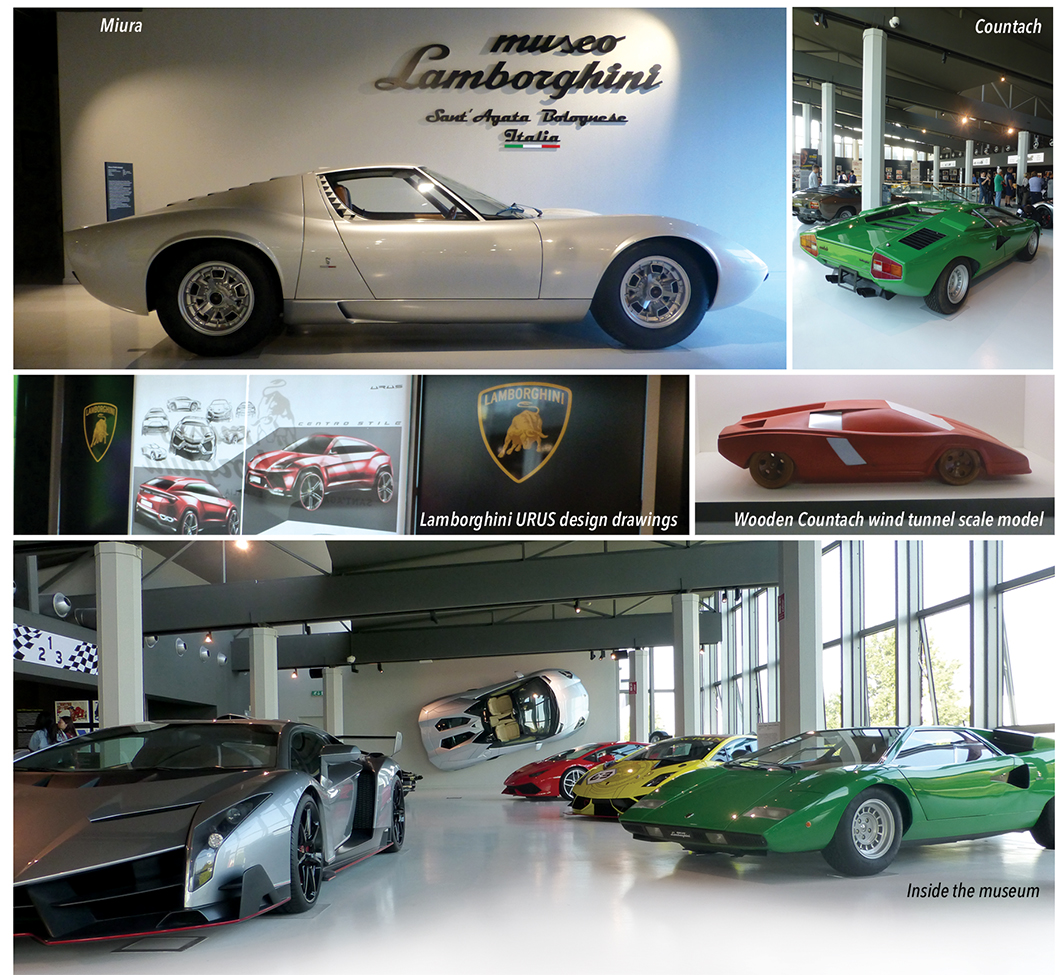 Not one to give in easily Lamborghini then pulled another masterstroke. In 1966 Automobili Lamborghini unveiled the jaw-dropping mid-engined Miura at the Geneva Motorshow: The supercar as we know it was born.

Ferrari had been caught on the hop; it would be another 7 years before Ferrari S.P.A built a 12 cylinder mid-engined two-seater of their own, by which time Lamborghini had unveiled their mind-blowing wedge-shaped Countach. It was every schoolboy’s poster car. Pronounced coon-tatch, the Marcello Gandini designed sci-fi-like wedge’s name roughly translates from the Piedemontese dialect into English as Blimey! (Or maybe it’s something a tad stronger).

Both the Miura and the Countach – which still promotes similar exclamation even now upon first sight – plus a host of more modern Lamborghinis and prototypes that didn’t make it to market can be viewed and drooled over in the Museo Lamborghini that sits just inside the same factory gates in Sant’Agata Bolognese that Ferrucio Lamborghini once walked through in order to get to his office. You can even take a factory tour if you book ahead.

Maybe next time. With only a day set aside to see Motor Valley, time was of the essence. I set the sat-nav for Modena.

Just a 30 minute drive through the agricultural flat-lands of Emilia Romagna brings you to the railway sidings of Modena. It’s here that Alfredo Ferrari, Enzo’s father, once owned a blacksmith’s shop (Ferrari roughly translates as farrier incidentally). This is the place where in 1898 Enzo Anselmo Ferrari was born. 20 years later Enzo sold his father’s house and workshops in order to buy his first racing car. The rest as they say…

Today the very same and now beautifully restored buildings, plus a very stylish and contemporary yellow roofed glass extension, house the snappily titled Museo Casa Enzo Ferrari. Once inside you’re totally immersed in the history of both Ferrari the man and Ferrari the manufacturer. Cars spanning Ferrari’s 70 years as both a road and racing car maker are displayed as if they were in an art gallery. But honestly, the photographs in the entrance to the motor hall are worth the entrance fee alone, as are the hand-written letters to Tazio Nuvolari, (1930s Italian racing driver) bearing Ferrari signature’s and signed in his favourite purple ink.

From here it’s all too tempting to catch the shuttle bus to Maranello and the Ferrari factory, and leave the autostrada to the Italians. But there are a couple of other places nearby that are well worthy of a wander around first.

Maserati’s HQ is literally a 5 minute walk from Ferrari’s birthplace. There’s no museum but there is a beautiful showroom full of Maserati goodies both old and new, next to the factory’s main entrance. There’s a plaque on a wall on a building at 11 Via de’Pepoli, back in Bologna to mark where Automobili Maserati was first founded, but I doubt if Alfieri and his brothers Ettore, Ernesto, Carlo and Bindo ever envisaged anything as state of the art and as imposing as this. It would’ve been rude to not have taken a look around – I was passing after all.

The other place I really wanted to see was the former Bugatti factory, just up the road in Campogalliano. Now abandoned, this is where the Bugatti EB110 was built during the early 1990s. Once briefly the world’s fastest production car the EB110 was the only production model made by Romano Artioli’s Italian incarnation of Bugatti before he went bankrupt.

A quick photo stop to snap the fading blue paint and it’s on to Maranello. If ever there was a place to make car fans go weak at the knees, this surely is it. Streets are named after racing drivers, the afternoon’s sleepy silence is constantly broken by the sound of V8s and V12s, the whole place seems to have been painted in rosso corsa, and there’s even a not so secret race track.

And right in the middle of it all sits the Ferrari factory.

Needless to say you can’t just walk in. But you can stand by the same gates that every Ferrari driver; Ascari, Alboreto, Surtees, Schumacher, Hawthorn, Collins, Scheckter, Lauda, Raikkonen, Amon, Villeneuve, Vetel … the list goes on, and on, once walked through to sign their contracts. Directly opposite you’ll find La Ristorante Cavallino. It was Enzo Ferrrari’s favourite lunch stop, and the place he would’ve bought his newly signed drivers lunch. Even if they’re not cooking, make sure you go in. They will let you have a look at the memorabilia if you ask them politely. Be brave, you won’t regret it. The signatures on the walls read like a racers Who’s Who?

And don’t stop there. Walk off your pasta. You never know what you’ll spot, a factory prototype maybe, out on test. Take a peek through the fence at the Fiorano test track too.

Just around the corner from there you’ll find the Museo Enzo Ferrari. Needless to say it’s packed full of all things fast, Italian and predominantly red. 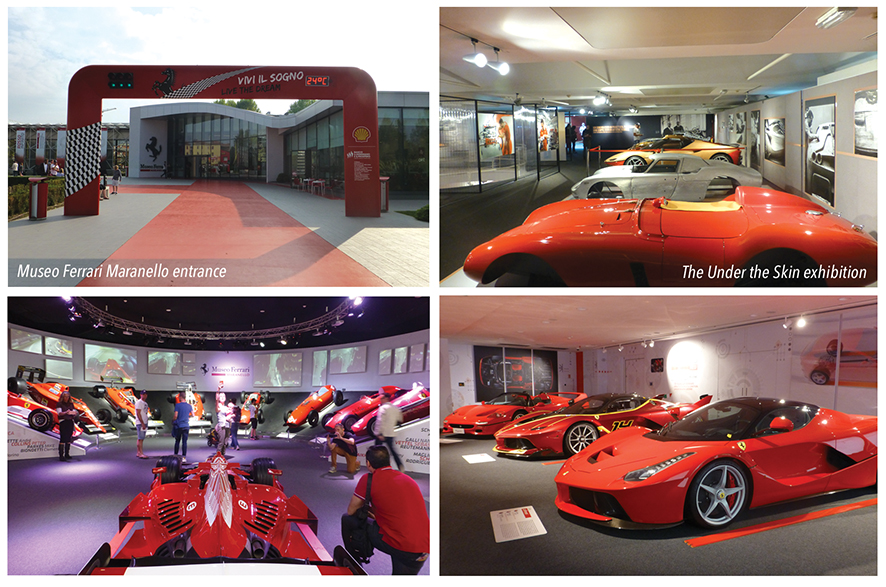 Currently, there’s an exhibition on called Under the Skin, which goes someway at least to explaining Ferrari’s powerful and enigmatic personality, the design and manufacturing process, the famous clientele, and the future of the brand. The exhibition features the rare cars and memorabilia, plus original hand-drawn sketches, blueprints, sculpture-like models and engines displayed in public for the first time ever. It’s definitely a must-see.

When it’s time to leave I notice something in the museum car park. German number plates, British number plates, French ones, Swiss ones, American and Canadian accents. It’s packed with visitors, who’ve travelled from all over the world to just see this place. Some are even dressed in red. It’s a Mecca. A place of worship. For those gathered here today, Ferrari is like a religion.

Everyone has their icons after all.

WIN TICKETS FOR THE FERRARI UNDER THE SKIN EXHIBITION

Not everyone can jump on a plane to Bologna, hire a clapped out Lancia like I did, and set off around Motor Valley. But, you can still see Ferrari Under the Skin.

Bay has teamed up with London’s Design Museum to offer one lucky reader the chance to WIN two tickets to attend The Ferrari Under the Skin Exhibition. Available from the 15th November 2017 until the 15th April 2018, it’s a chance to see the very same exhibition I saw in Maranello, plus over a dozen very rare Ferraris including an original 1962 250 GTO, an F40 and a F1 2000 raced by both Michael Schumacher and Rubens Barrichello. All you have to do is tell us which significant anniversary Ferrari celebrated in 2017? Was it their a) 50th b) 70th or c) 100th?

All entries must be received before 5th January 2018.

The winner will be notified by telephone or email – good luck!

Tickets cost £18 for adults, £9 for children over six and entry for Design Museum members is free.

Editor’s decision is final. No correspondence will be entered into. For full competition rules see www.thswanseabay.co.uk