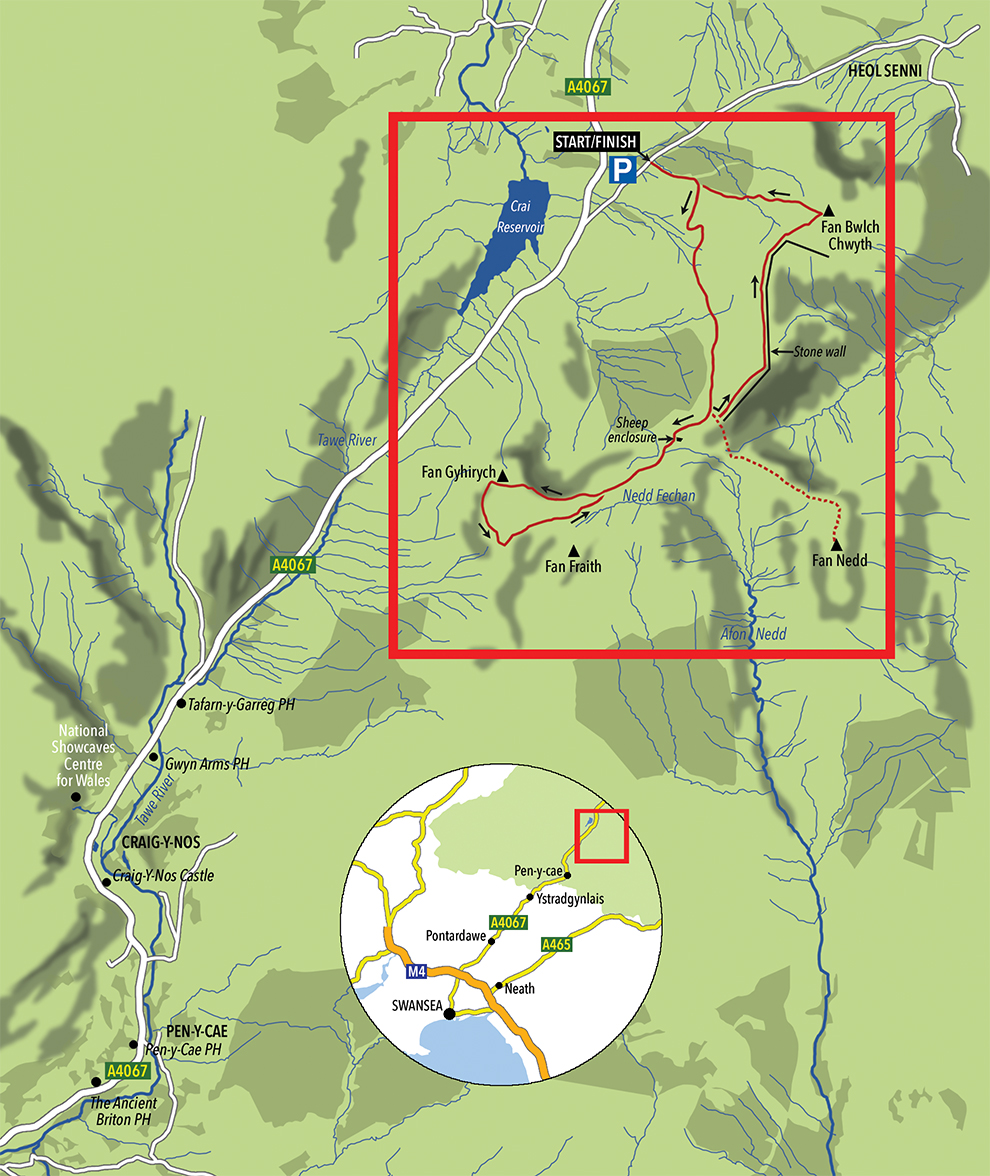 IAN’S WALK FOR THIS ISSUE IS THE PERFECT ANTIDOTE TO AN OVERDOSE OF MINCE PIES. IT HAS SOME GREAT VIEWS – JUST REMEMBER TO WEAR STURDY FOOTWEAR

My favourite time to go walking is undoubtedly early morning. Ideally when it’s dry of course and equally pre-ferable when the sun is forecast to shine. If you’re lucky, there’ll not be a breath of wind, the trees will be motionless and the still lakes look like they’re full of mercury and not water. You feel that the day is exclusively yours. You own it; it belongs to you and no one else. You become weirdly possessive and reluctant to share it with anyone. But when the rest of the world inevitably crashes the party, you really feel like telling them to bugger off. And apart from all of that, I just love the smell of Gore-Tex in the morning. 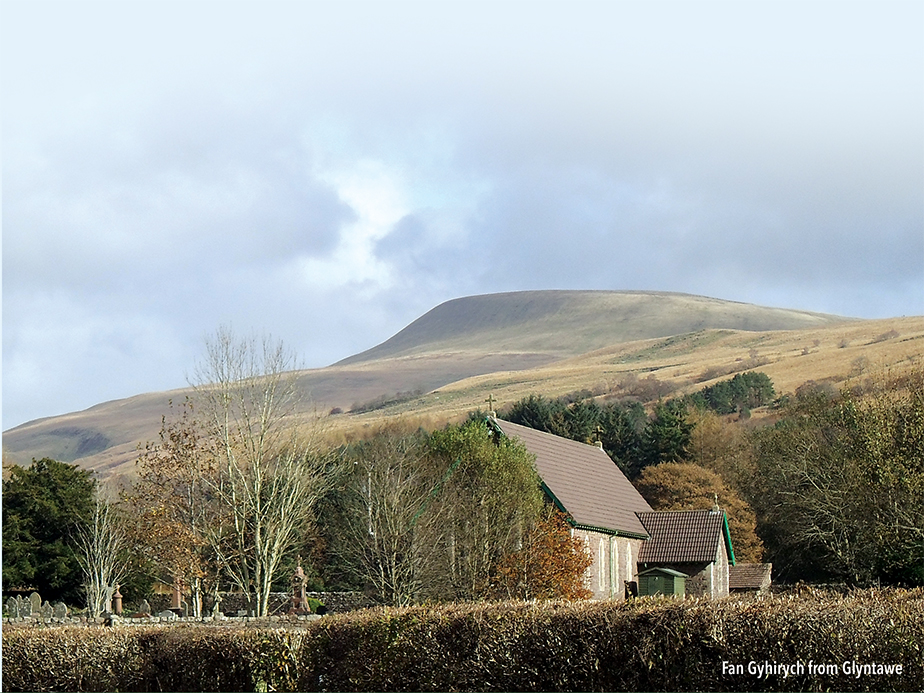 So, this month we’re heading back up to the Beacons just a little to the north of Craig y Nos for a circular walk around Fan Gyhirych, that triang-ular looking mountain that you can see right at the top of the Swansea valley.

Again, it’s one of those areas that I must have driven past hundreds of times over the years and generally ignored to the extent that I had no idea what it was called until recently. You’ll also be pleased to discover that it’s not too far to go. It only took me 45 minutes from Sketty and bearing in mind it takes 15 minutes to get to TK Maxx, then it’s no time at all! 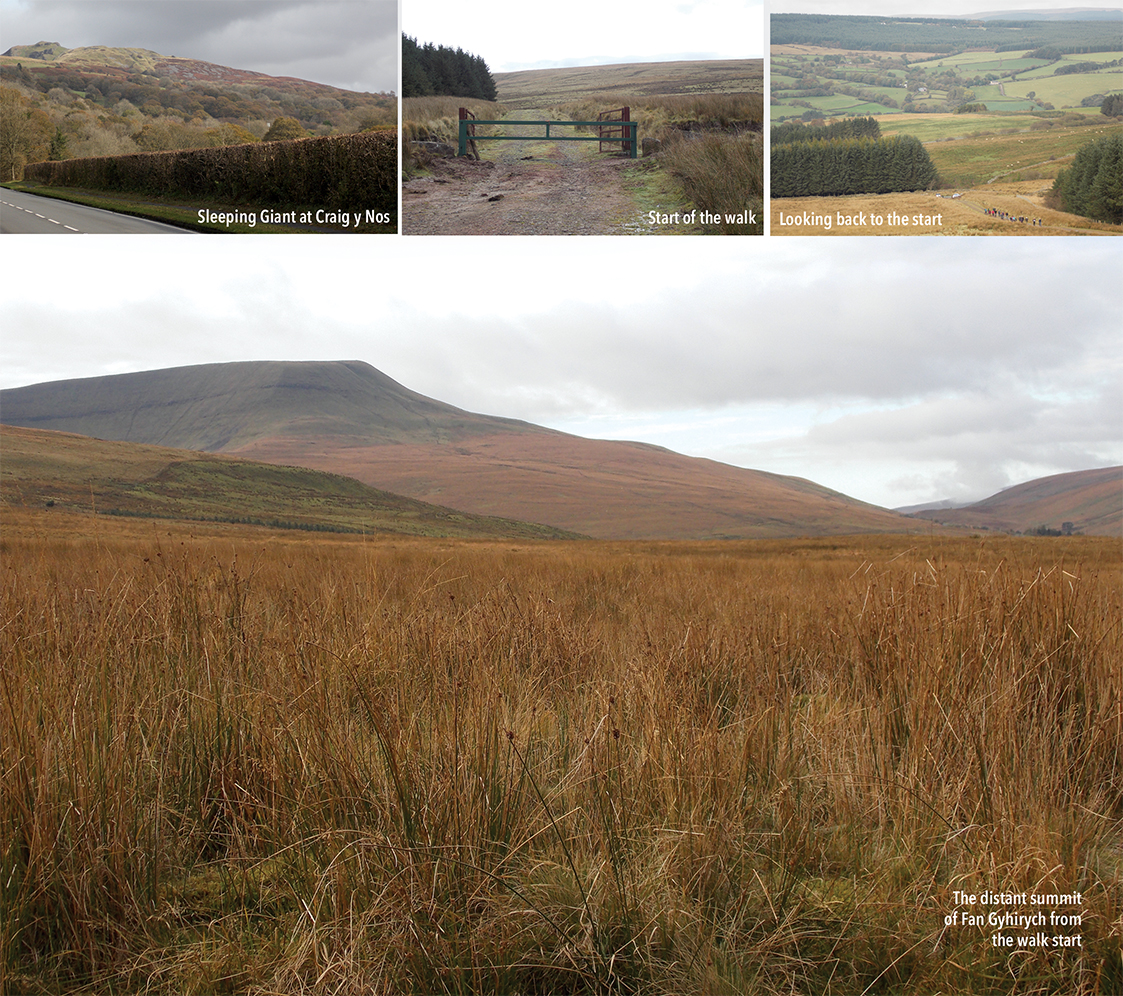 Things to look out for on the journey up include the “Sleeping Giant”, the name given to the shape of the limestone hills above Craig y Nos which give the appearance of a giant in slumber. You can see it straight ahead of you, just after Ystradgynlais, but I have to say that it seemed to me that the poor dab might have died in his sleep given his state of repose. Then a little further on you’ve got the beauty of Craig y Nos itself with Madame Patti’s Gothic castle nestling in the Alpine-like valley. Makes you want to break out into song mun.

Climb the hill past Tafarn y Garreg, with your destination towering over you on the right, you’ll come to Crai reservoir and then you take the road signposted to Heol Senni. After a short distance you’ll see a wide opening to a track on the right and this is the starting point of the walk. I have to say that it is a little bit remote, so you may consider leaving your Maserati here to be a bit risky, so you can always park it in the lay-by back on the main road; it’s just that you make the walk a bit longer. But I suppose you’ll have to walk a damn sight further if your car has been pinched, so maybe it’s not such a bad idea after all. 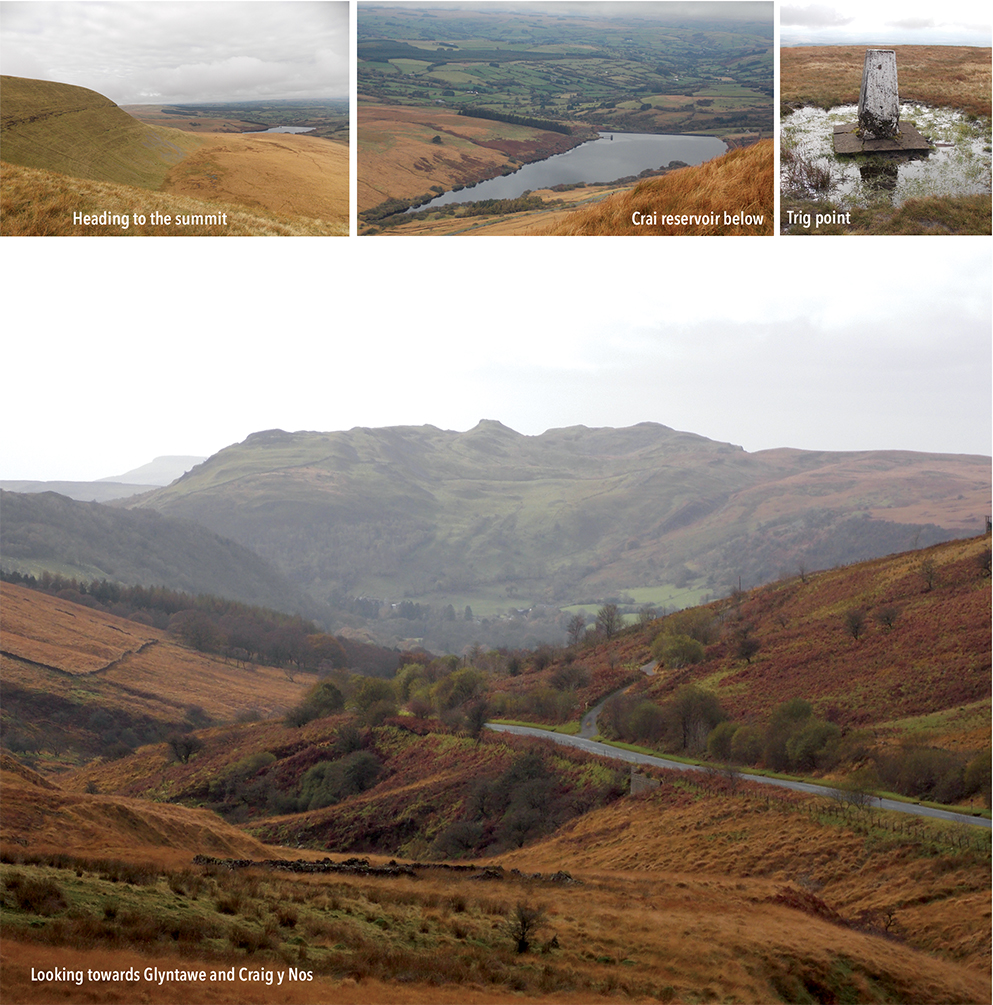 Follow the well defined track without deviation for about 3 miles, passing a sheep enclosure and a stile. After a short distance you’ll see the track veering left and disappearing around a corner and it’s here that you need to look out for a path to the right, leading over towards the summit.

Up until now the views will be to your right, with Crai reservoir down below, and across the valley the ridges of Fan Hir and Fan Brycheiniog, which are just around the corner from the Llyn y Fan walk we did a few months ago. In fact, if the visibility is good you’ll get a glimpse of Llyn y Fan Fach just below the ridge. (They’re big on Fans around here as you’ve probably noticed – roughly translated as top of this place/hill) Never out of your view and straight ahead will be the precipitous sandstone escarpment of Fan Gyhirych. This has all the characteristics of a corrie or cwm type landform – a steep three sided hollow with a small lake nestling beneath as is found at Llyn y Fan Fach and Llyn Cwm Llwch, which is beneath Pen y Fan. These features were formed in the last ice age some 10,000 years ago, mostly north facing and were scooped out by the massive erosional forces of the ice. When the glacier retreated, meltwater remained in the hollow in the form of the lakes we see today. However, although this has all the hallmarks of such a landform, it doesn’t have a lake, so I might be completely barking up the wrong tree.

Once off the track you head towards the plateau and the trig point in the distance marking the summit. It goes a bit bland on the way, as you’ve just got that characteristic upland moorland type environment around you. A bit vanilla really, a little magnolia or even chicken korma. But not for long, because once you hit the mountain’s edge, instead of it being all James Blunt, you’ve suddenly dropped a tab of acid and it goes completely Grateful Dead on you. The views are just amazing. The U- shaped glacial Swansea Valley directly to the south with the city in the distance (and yes, the bloody DVLA!); Gower to the west, and the Neath Valley and Port Talbot to the east, with the mountains of the South Wales valleys further round to the east. In front of you is Glyntawe and Craig y Nos through which the youthful River Tawe flows. The geology there is characterised by limestone and is home to an extensive cave system of Ogof Ffynon Ddu and the show-caves at Dan yr Ogof. As I stood there taking all this in, against a backdrop of bikers roaring by on the road below towards Brecon on their regular Sunday spin, I was joined by a paraglider with the obvious intention of hurling himself off the mountain. He tried to convince me that his was a safe and very rewarding pastime, which I politely acknowledged, all the while thinking that standing there with panoramic views all around with my feet planted firmly on the ground was the closest I’d ever want to get to paragliding thank you very much – paragliding for wimps. 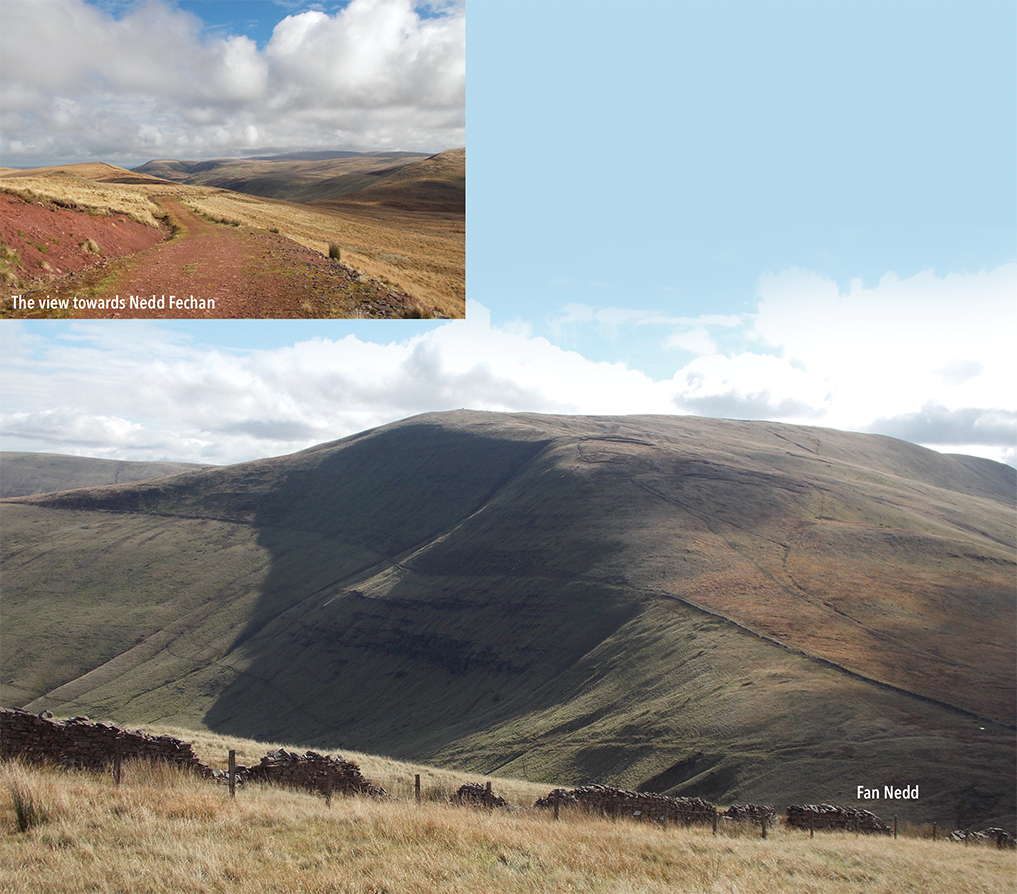 Follow the plateau in an anti clockwise direction, until you are facing east when you can drop down towards the track you left behind earlier, albeit a little further on. Once you meet the track go left and you’re now heading back in the direction you’ve just come. Now the views to the east get quite juicy (although you did pass them on the way up). In front of you as you meet the path, is the mountain of Fan Fraith, and the infant valley of the Nedd Fechan, one of the rivers that make up the spectacular waterfall country just downstream. Passing the sheep enclosure, Fan Nedd appeares to the right and then you’ll come to a junction in the paths and you leave the track taking the path to the right. Descend slight-ly and you’ve now got a choice. If you’re feeling particularly energetic, you can head straight on and climb Fan Nedd – it’s not as steep as it looks and it’s worth it – or you can jib out like I did (I had to get home to mow the lawn you see) and head for Fan Bwlch Chwyth to the north east. If you do, then before the gate look for a path to your left which follows a dry stone wall and a fence. If you climb Fan Nedd return to this spot.

Follow this path, glorying all the while in the view that now awaits you to your right. In the near distance you’ve got the Craig Cerrig Gleisiad National Reserve, a very obvious scar in the side of the mountain and just behind, towering over the entire area, the two majestic peaks of Corn Du and Pen y Fan strutting their stuff – the guv’nors of the area. Further to the north you can pick out the northern edge of the Black Mountains with Twmpa, also known as Lord Hereford’s Knob, standing erect and proud in the distance.

Keep the wall to your right until it veers away at right angles but you keep going straight on, heading towards the trig point in the distance. Once you reach here, take a sharp left but as there’s no real discernible path you’re off piste. 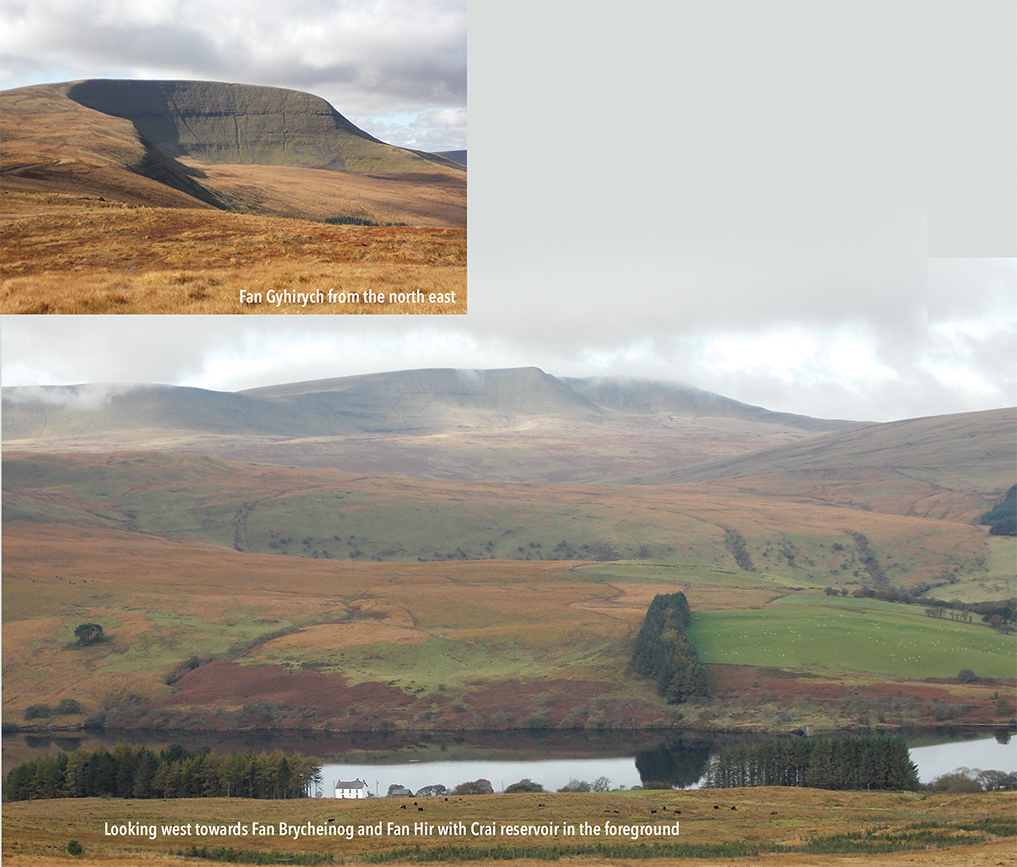 *TWISTED ANKLE ALERT* you will be walking over very uneven terrain so you could quite easily turn over on your ankle, so take your time and proceed very carefully. Wear boots!! Keep on until you reach the brow of the hill when a forestry plantation will come into view with the reservoir in the background. Head down the slope, again taking great care, towards the corner of the plantation and once reached follow the edge of the wood until you return to the track you started out on, and back to the start.

So, there you go. Another walk under your belt. You now have a choice. You can stop for something to eat and perhaps a few pints in one of the many pubs in the area – if you’re not driving of course. Or you could nip into TK Maxx on your way home as its only half an hour away. Sad!

Children and pet friendly: Yes – with reservations as it is quite tough in places

Distance: 8.5 Miles – not including diversion to Fan Nedd so add an extra 1- 1½ miles

Man: Christmas at the Patti