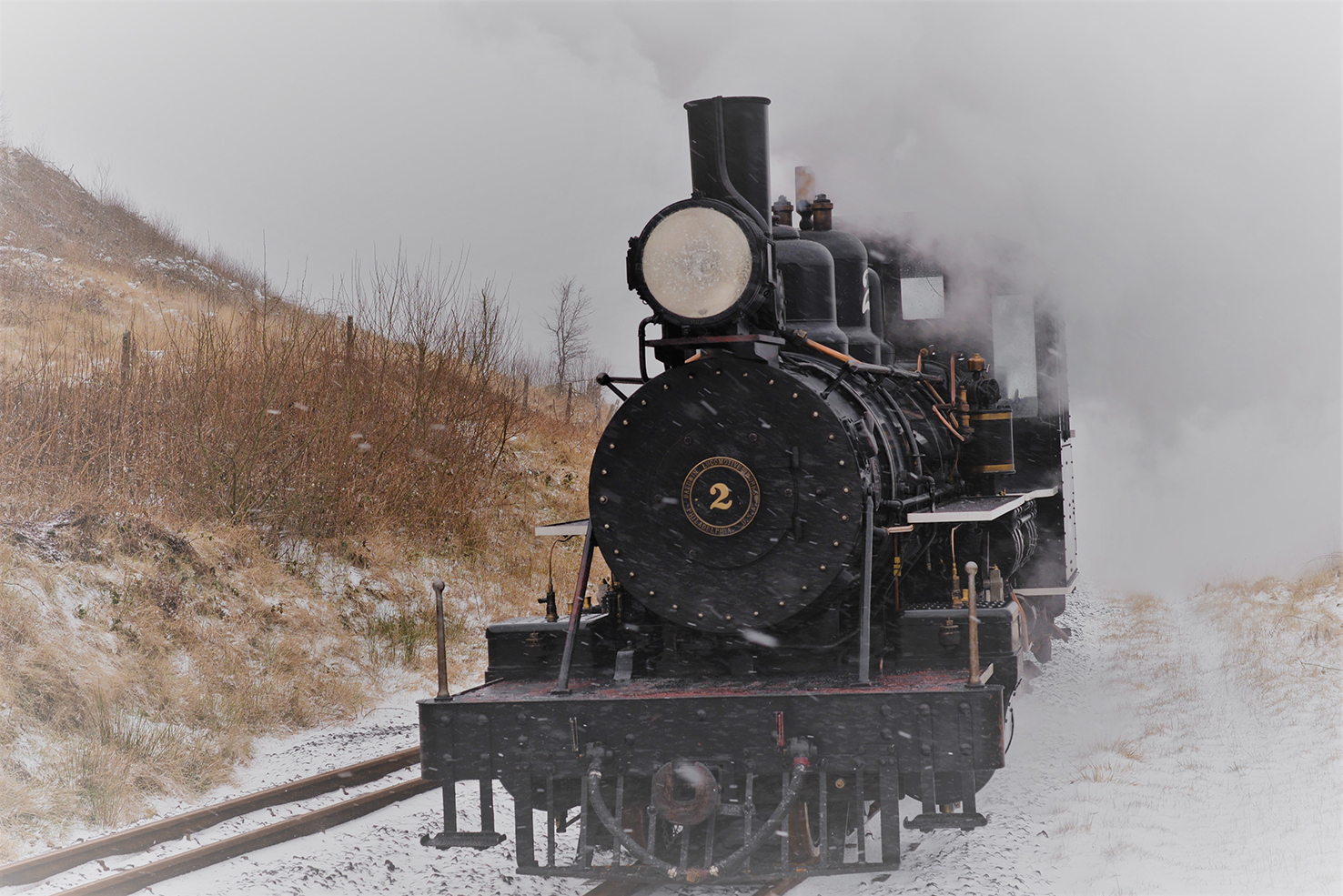 Kim’s ride this month is an ideal festive day out for all the family, and if you time it right you’ll be able to see Santa Claus as well.

Steam trains are great! I think for any male over a certain age, particularly if you had or indeed have a model railway, they stir something inside you; in junior school, every boy in my class wanted to be Casey Jones and I still have my hat! When my sons were young they developed a love for model railways and each had a small track fixed to the wall next to their bed. I suspect this stemmed from hours watching Thomas the Tank and his friends, though personally I preferred ‘Tugs’ but as was often the case I found myself in the minority so Thomas it was.

One weekend my wife had gone away and I was helping the boys with something or other on one of their layouts, when one of them suggested it would be great if the trains could travel through the wall. Inspired! Within a few hours, we’d drilled two holes in the wall, changed the track so we now had a continuous loop allowing the trains to travel from one bedroom to the other carrying various toys and messages. Wonderful! Apparently not. 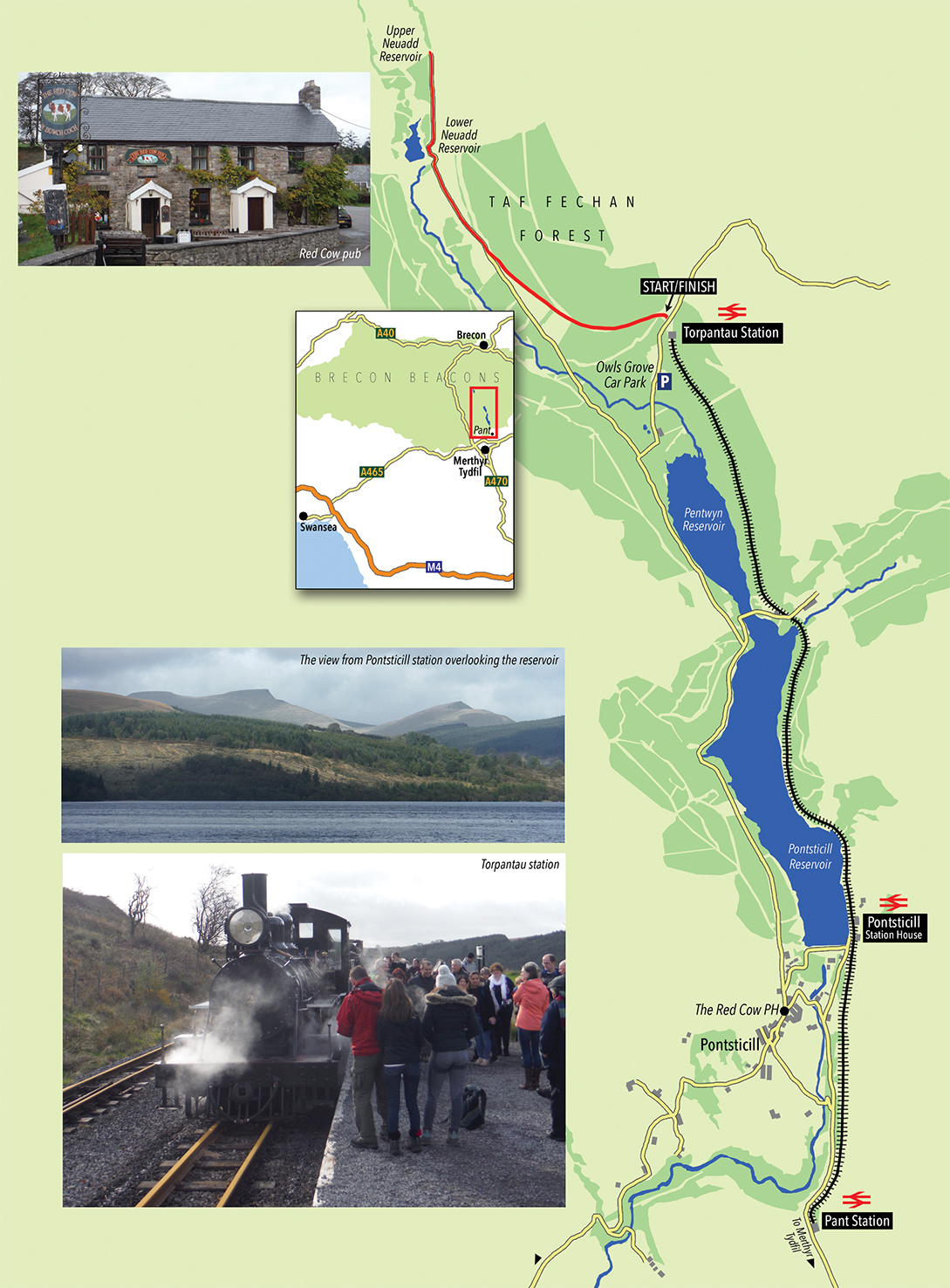 I tried to explain it was a ‘man thing’ and Josh did his bit by send-ing a message through on the train saying ‘sorry mum’, but it was several days before Jayne came around to the idea and even then, deep down, I suspect it was still a bone of contention.

Today we’re sitting in Owls Grove car park eating sausage sandwiches watching as an engine puffs past above us, on its journey towards Torpantau. Like steam trains, sausage sandwiches are simply wonderful and the world is a better place because of them. Having just ridden a rather pleasant loop around Pontsticill reservoir it occurs to me that, combined with a trip on the Brecon Mountain Railway this would make a great family day out. Of course with that time of year looming on the calendar, Brecon Mountain Railway offer a Santa Special which is a wonderful treat for the children (and Dad’s) and it’s something I’m sure Mum would enjoy too. You’ll need to book in advance though as your man’s rather busy, particularly at this time of year. 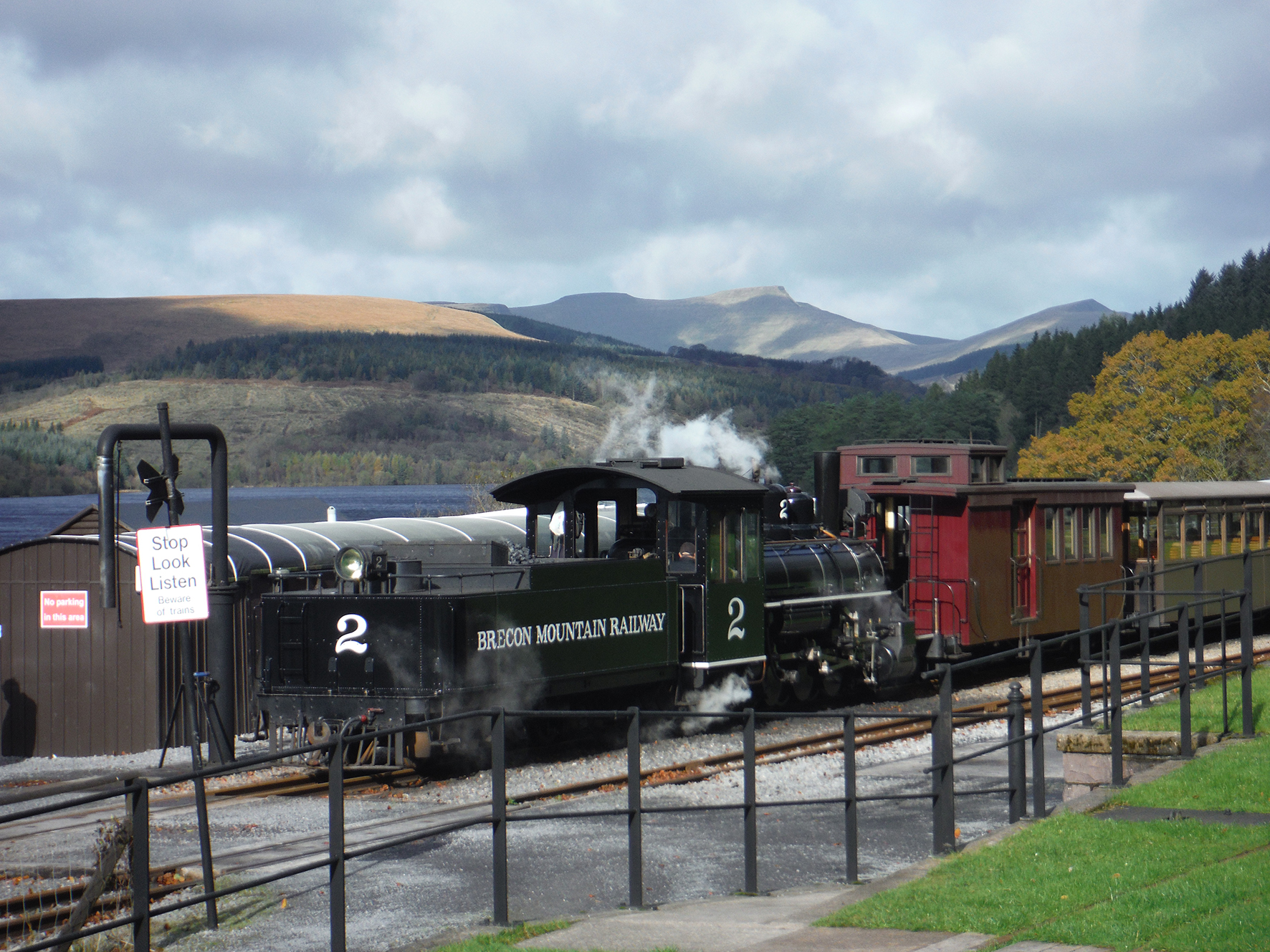 Pant station is just a short drive from the village of Pontsticill which apart from the Red Cow pub and some public toilets doesn’t really have a lot to offer the visitor. The railway however certainly does; leaving Pant station, the train makes its way to Torpantau, where the engine is uncouple-ed and switched for the return journey via Pontsticill where it breaks the journey for half hour or so. This stop allows enough time for the children to visit the small steam museum, explore the great little play area and should you wish, pop into the cafe. We did this journey in late October on a cold blustery day and I must say it was an absolute joy and without exception, everybody in the carriage had a huge smile on their face throughout the trip. Parents and children are also allowed to stand on the gated tailgate whilst the train is travelling, this offers a different perspective on the journey, as not only are you out in the fresh air but you can hear the hisses and puffs of the engine as it chugs along the track. For me with childhood memories of a cowboy hat on my head and a gun slung around my waist, I just wanted to jump off firing my gun as I rolled down the bank. The train runs several times a day, giving you the option to return from any of the stations on any of the trains with the added bonus that not only do they take dogs but also, for a small fee, bikes! 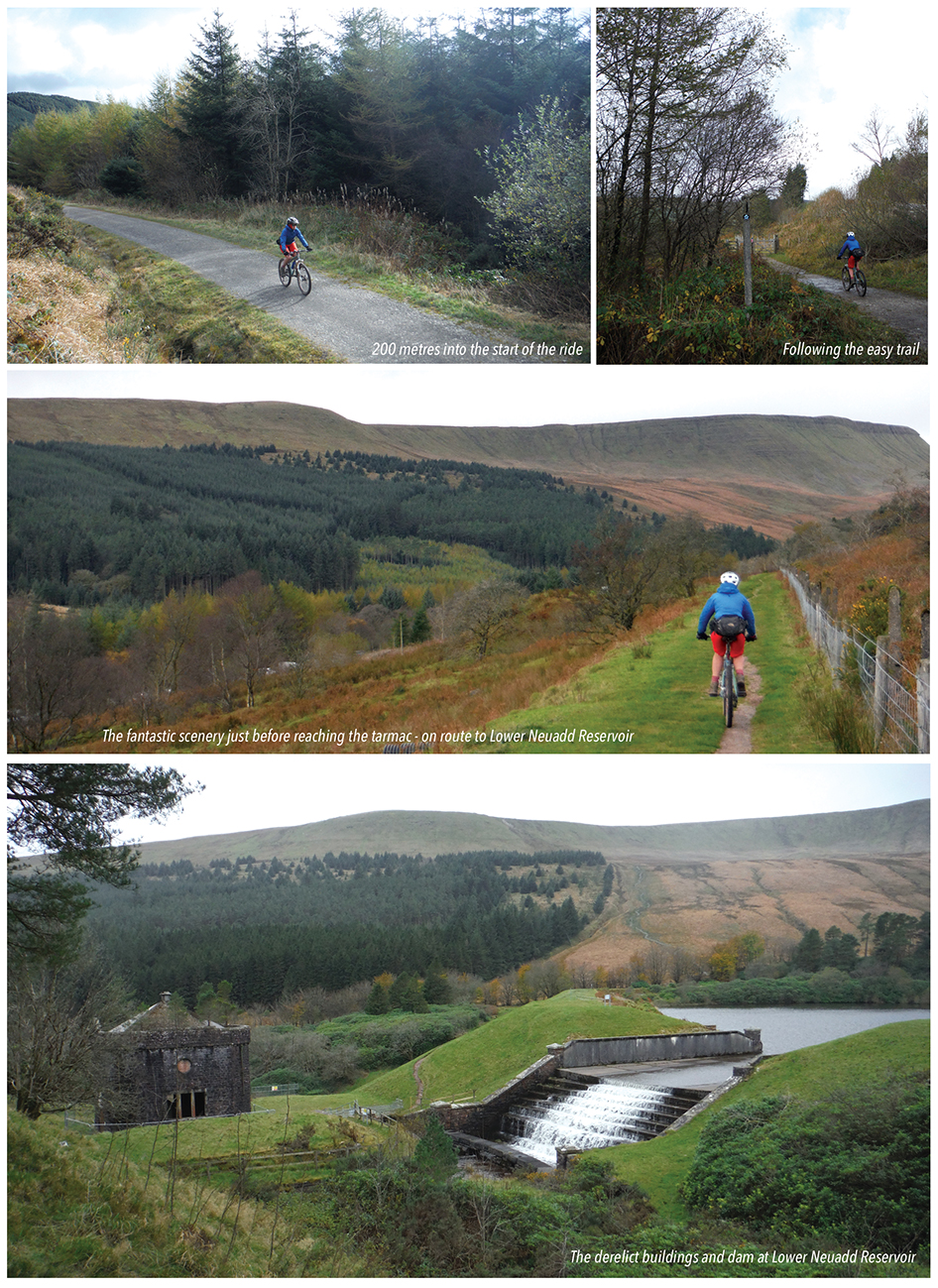 This loop isn’t very long and again, a simple out and back but it is ideal for young families. The attached map (previous page) shows the start and finish point as the parking area opposite Torpantau station, but of course should you wish, you could leave your vehicle in the station car park in Pant and take your bikes on the train. Although this particular route is short, there’s plenty of opportunity for further family riding in the area, just ask at the station or in the pub. One I can recommend if you have children who are more confident on their bikes, is an 8.5km loop around the reservoir, this takes you on the Taff trail through the forest before crossing over the bridge below the Pentwyn reservoir and return-ing to your start point. For an even shorter ride, you could disembark the train at Ponsticill and race it back to Pant, as I said there are plenty of choices.

Whilst exploring the area, to our surprise we came across a witch, not a real witch you understand (though that is an assumption on my part) but an actress. Now, remember you heard it here first, a Bay scoop! Sky are making a mini-series about witches and we’d come across one of the sets. Remarkably they’d created an aged wooden house with its own jetty alongside the reservoir, which was to be the witch’s house for the duration of this particular shoot. Of course, if you were to visit this spot now, you’d be hard pressed to find any evidence of her cauldron, and I’ve already scoured the area for her book of spells. 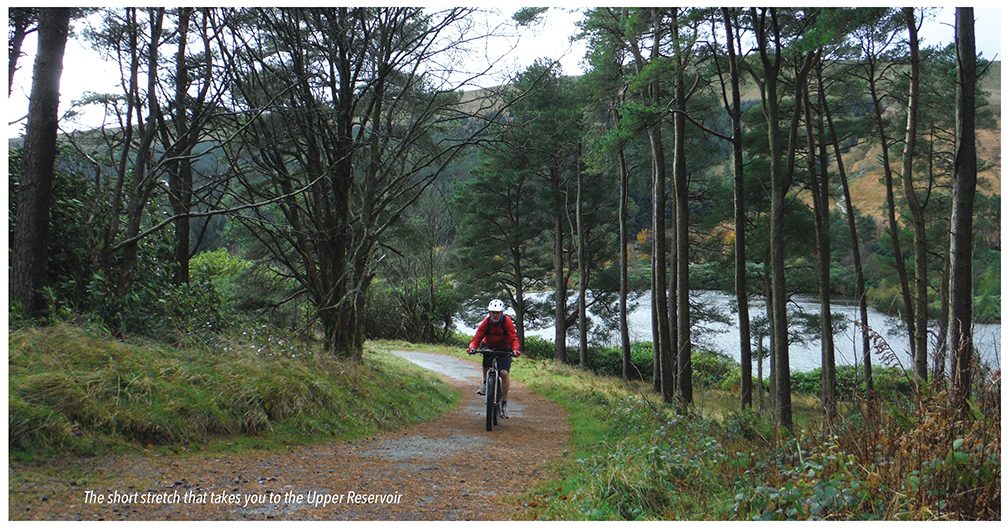 Back to the ride, initially we’re following the Taff Trail through a series of wooden gates; after 2km the trail turns off right up a stony track whilst we ride onto the tarmac road towards the now partially dilapidated buildings alongside the Lower Neuadd Reservoir (you’ll see them ahead of you). Normally this lake is dry but due to on-going maintenance work on the upper reservoir, it is now full again and is a fantastic area to explore. You can walk across the dam, play some seriously hardcore pooh sticks on the slipway or mooch about the old buildings. I’m surprised the park haven’t thought to put a discreet cafe here as it’s a busy spot, perfectly situated for walks up into the hills and there’s even scope for a bunk-house. If you choose to cycle further, a short stretch of road takes you to the Upper Neuadd.

Now it’s not often you have the chance to explore an empty reservoir and with a marked track lead-ing to the middle. This is a wonderful opportunity. Surprisingly the exposed ground is no different to the surrounding landscape even though it has been submerged for over 100 years, either that or it has made a remarkably quick recovery. Although it’s not particularly high and I’m not sure why but standing below the Victorian walled dam was for me a rather humbling experience. 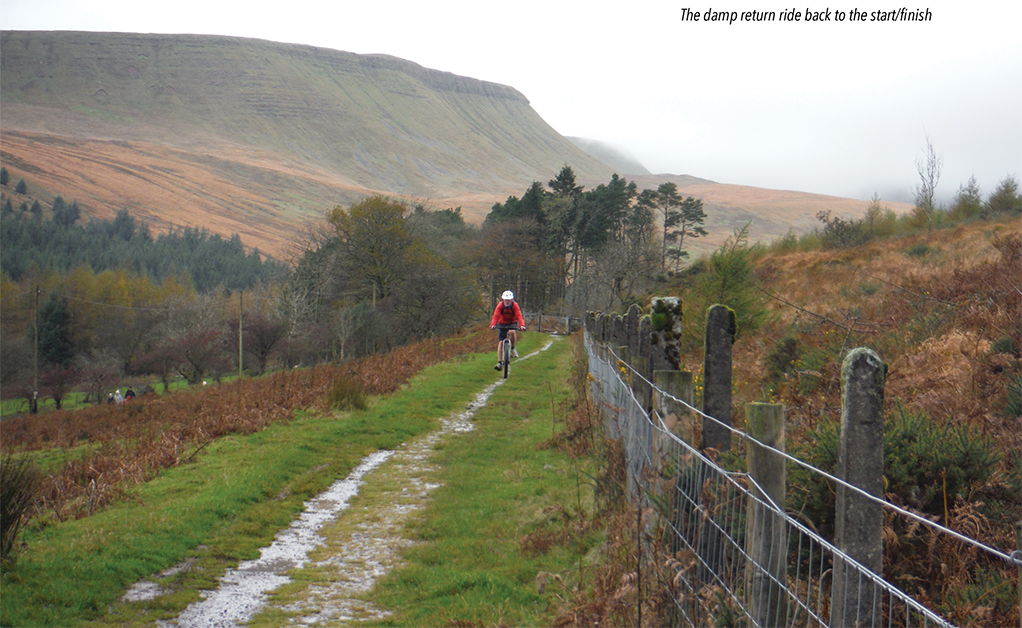 The trip back to the car, surprisingly doesn’t take very long as you whizz down the track taking in some great views of the upper Taff Valley. Once back at Torpantau, if you have time and the gate is open, go through and after a couple of hundred metres you’ll come to a tunnel entrance. Now rumours abound that you can walk or cycle through this but obviously I couldn’t possibly comment.

I know it’s only November so I’ll say it quietly….have a wonderful Christmas. Kim

A big thank you to Tracy and Alan at The Brecon Mountain Railway.