Liz has a very pertinent article for us this month. Losing or misplacing your glasses/phone/keys is one thing, but losing someone close to you, other than through death is so unnecessary; maybe with Christmas fast approaching we should reach out and reconnect with loved ones – no matter what.

Grand-daughter wants to be an actor when she grows up so she was practising her impressions. ‘Who’s this, Granny?’ she asked.

She put her finger on her lips and with a slight frown said, ‘Now what did I come in here for?’

Children are far too observant.

She could equally have said, ‘Now where did I put my glasses/keys/bra?’

I have reached that age. In fact I reached it several milestones ago. Don’t laugh: it comes to us all. To make up for it we’re blessed in other ways: the hairs that sprout on my chin are now mostly white instead of black and my worsening eyesight means I can no longer see them anyway.

But as I was saying, I lose things. A lot. Not really lose of course. Have you noticed if you tell some-one you’ve lost something they will inevitably ask you, ‘where did you lose it?’ If I knew where I’d lost it it wouldn’t be lost! Mostly I will know it must be in the house somewhere and if I retrace my steps I’ll find it. In time. Usually.

Besides I never lose important things. Those I put in a safe place. It might take me a while to recall the location of that safe place but I get there in the end. Usually.

Take my bible for example. I looked everywhere for it. ‘Where’s my bible? Have you seen it?’ Nobody had so I had to rely on my old bible and the internet for a few weeks. Then one day I was looking for something to wear and I found my bible. In the airing cupboard.

That’s when I remembered I’d spilled water over it and had put it in the airing cupboard to dry out. See? Perfectly reasonable explanation.

And, of course, there’s the added benefit of unexpectedly coming across the chocolate stash I’d forgotten I’d hidden from Husband.

But I can remember being lost too. I must have been about nine. We were on Caswell, my mum and me, and I’d been down to the sea which was a long way out. I was walking back up the beach and looking for my mum but all I could see was a blur of people. I knew my mum was there somewhere but I couldn’t spot her. She must have been keeping an eye on me though as, in among the crowds, I spotted a familiar arm waving. Relief replaced growing panic. In reality it was prob-ably only a minute or two but for those minutes, as far as I was concerned, I was lost. 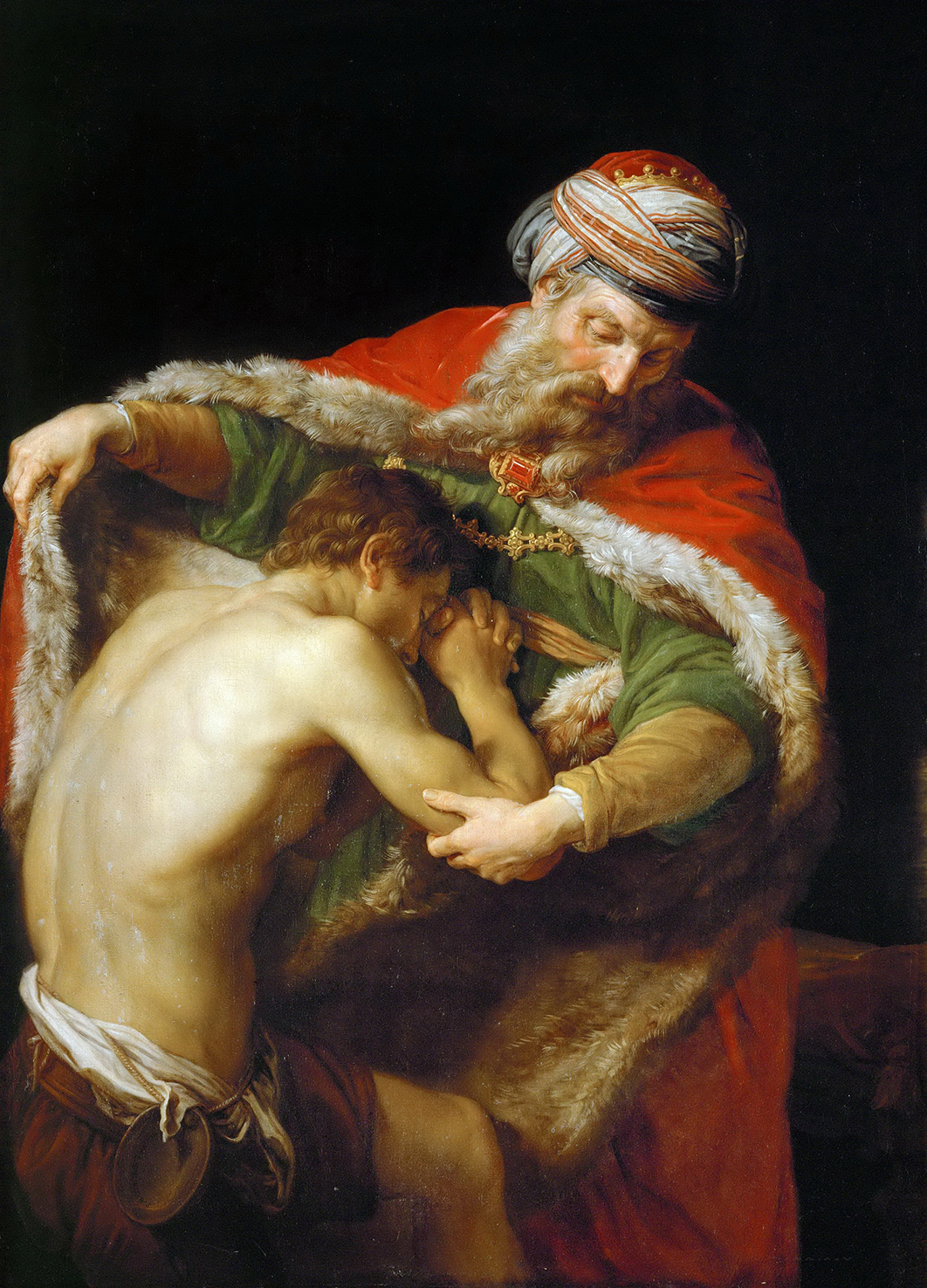 The return of the Prodigal Son (1773) by Pompeo Batoni

I heard a story on the news recently about a young man whose father had given him half shares in his multi-million business. It hadn’t taken the young man long to realise that he could give up work and live off the profits from the shares so he left home and moved to London where he enjoyed living the high life. Two financial crashes and the recession soon divested him of all the money that he hadn’t already spent and he ended up living on the streets. He told the reporter that the night he’d been urinated on when he was sleeping in a doorway was the night he’d decided to swallow his pride and go home. ‘I didn’t know what sort of reception I’d get,’ he said, ‘but when I was walking up the drive the front door flew open and my father came running out. He put his arms around me and he was crying and just so happy to see me.’

I can’t help thinking the father in that story is rather unusual. I never knew my father so perhaps I shouldn’t make assumptions but I imagine the reaction of many fathers would be:

‘I wondered how long it would take you to come creeping back. Well, you’ve got a lot of making up to do if you want to get back into my good books.’

They might be pleased deep down that their son had come home but they fear their authority would be damaged if they admitted it. The father in the story didn’t have that sort of insecurity. His son had been lost to him and now he was home. He was delighted and he didn’t care who knew it. He even threw a party to tell all his friends the good news.

When we’re lost and frightened or ashamed the last thing we want or need is a father who’s going to yell at us and tell us what rubbish we are. Jesus knew that when he told the parable of the prodigal son, when he described God as the father who doesn’t wait for an apology but, forgetting his dignity, runs out to greet us.

Isn’t that the sort of father we’d all want?