To coincide with the 2018, 100th anniversary of the Cease Fire, I am working on producing new research material which will be found both in the Central Library (Reference) and the Mormons Church, Cockett Road.

The research work, First World War, will consist of all the Swansea men who fought and died whilst serving with the British Army, Royal Navy, Mercantile Navy, and Royal Flying Corps/Royal Air Force. I will also try to establish what the individual’s occupations were prior to the war using the Military Records and the 1911 Census Records. 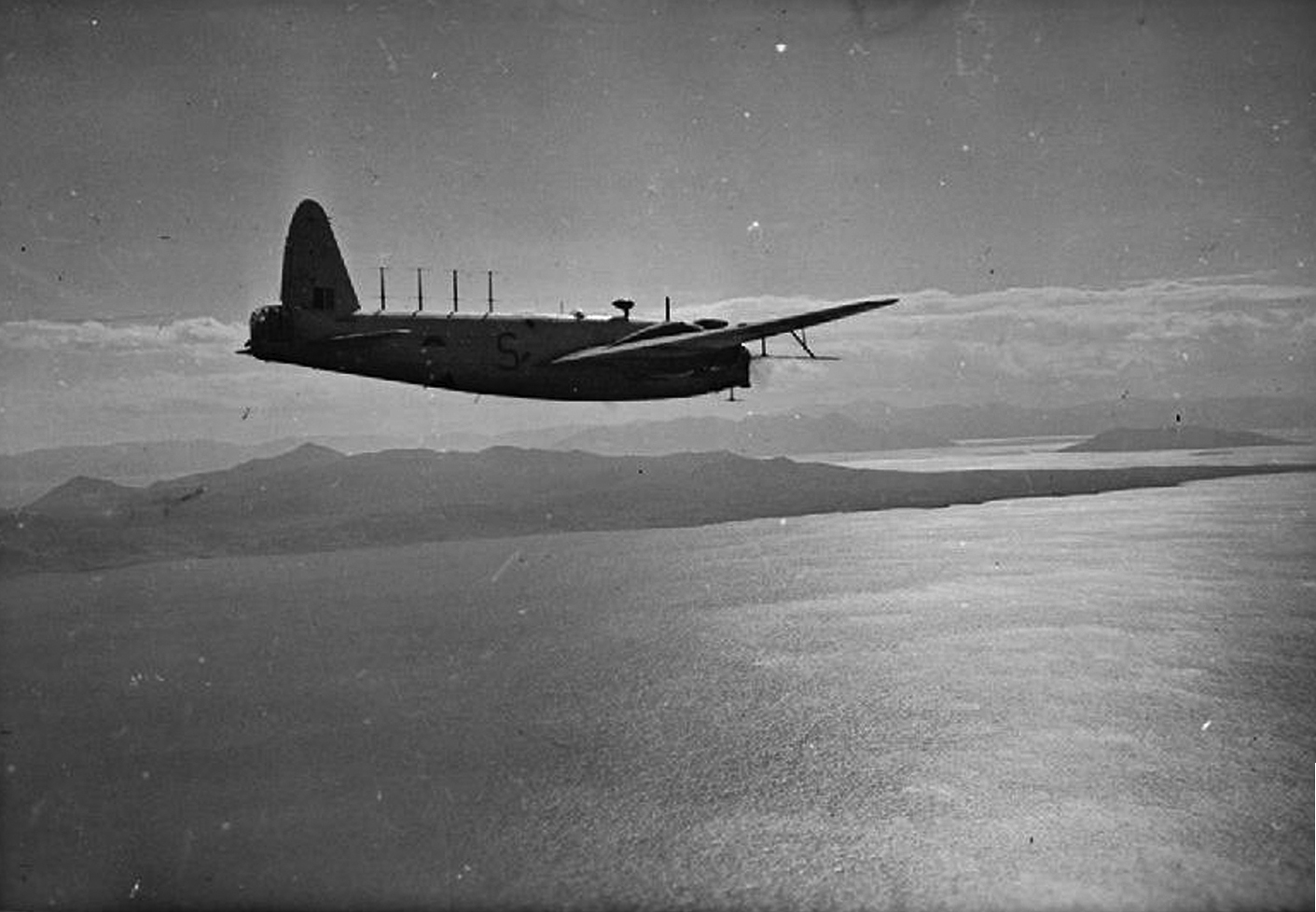 Whilst visiting St. Hilary’s Church, Killay, during the summer, I discovered that there are 24 Royal Air Force/Royal Air Force Volunteer Reserve, (RAFVR) graves. The RAFVR was formed in 1936. Three men, Sergeant E. H. Dawe (23), Sergeant E. T. A. Deacon (25), and Pilot Officer R. P. Fahrini (21) all died on the same day, 19th August 1942. They belonged to the No. 172 Squadron, formed in 1942, based at R.A.F Fairwood Common (Fairwood took over a year to be built and was finally operational in June 1941. During the period of June 1941 to March 1947 there were over 66 squadrons/flights that operated from the aerodrome). 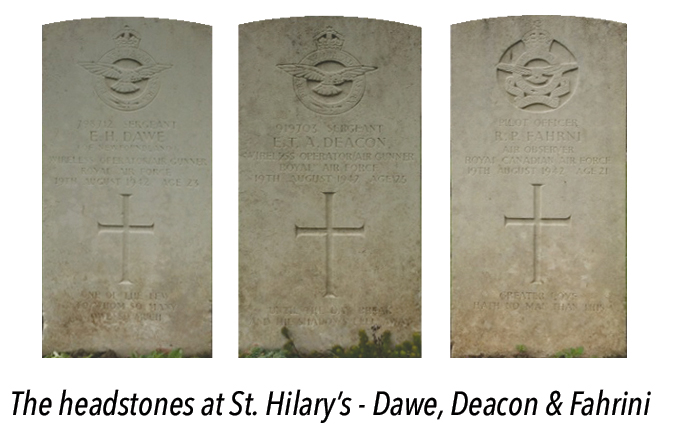 I conducted further research on No. 172 Squadron, and discovered that on that particular day, 19th August, there were four more deaths, J. Mullins, buried in Macclesfield Cemetery, F. P. C. Cross, buried in Aldershot Civil Cemetery, G. C. V. Jamieson, buried in Canford Cemetery, Bristol and J. S. Haynes, buried in Preston Cemetery, Tynemouth. They had been on board the Wellington VIII, ‘Leigh Light’ Bomber.

This is how the events of the morning, 19th August 1942 unfolded. Pilot Jamieson, took off from Fairwood, on a test and demonstration along with 8 people, including an US Army Officer and one ground crew. The aircraft was unarmed apart from a gun turret. The aircraft was flying over Swansea Bay, when she was mistakenly attacked by the anti-aircraft gunners on board the US tanker Gulf of Mexico which was in the Bristol Channel. Those on board didn’t have time to bail out and the Wellington caught fire before crashing into the sea a mile west of Scarweather Point, Porthcawl. The next day the US Gulf of Mexico, docked at Milford Haven and claimed that it had carried out instructions in accordance with the CAMSI (Confidential Admiralty Merchant Shipping Instructions). Sadly, the ship seems to have gone off the radar as I can’t find any trace of it. The plane wreck remains in Swansea Bay, protected by The Protection of Military Remains Act, 1986. 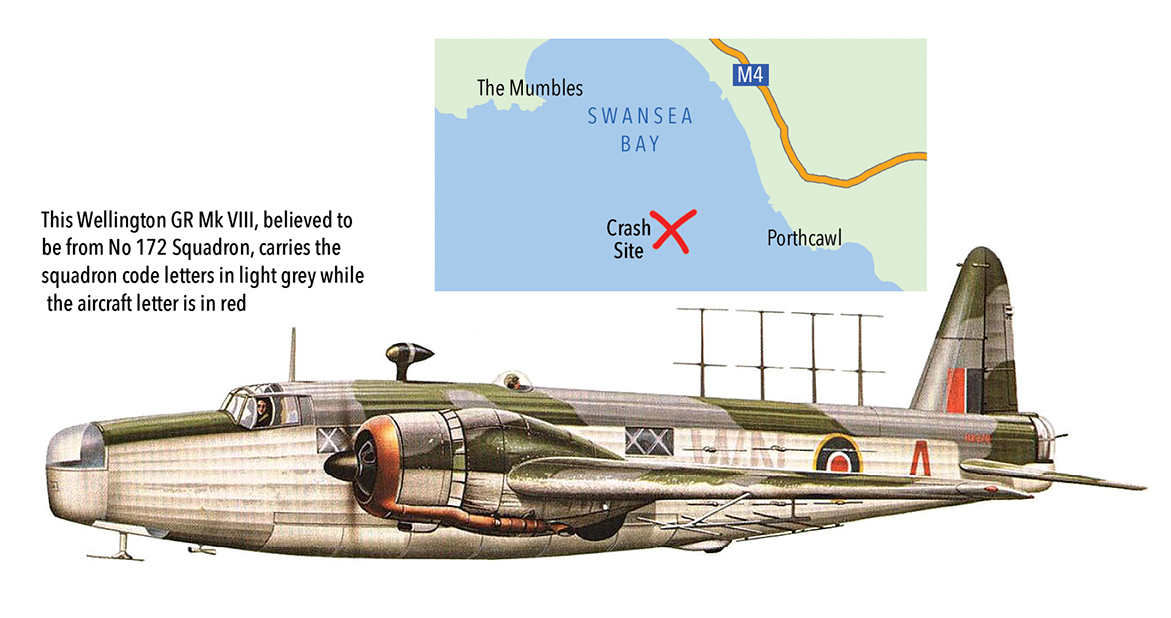 British servicemen who lost their lives at home during the Second World War were often repatriated to their home town to be buried, but this wasn’t the case for foreign men, they were often buried at the local cemetery/graveyard, for example St. Hilary’s, Killay. I applied for the death certificates of the three men who are laid to rest in St. Hilary’s. The results were very interesting. Fahrini’s couldn’t be found. Deacon’s was a military certificate giving the cause of death as an ‘aircraft accident’ and Dawes’ was an ordinary certificate, which stated that he died from multiple injuries and drowned due to accident whilst on Operational Flight. The sea being a cruel mistress, his body was located 160 degrees off Mumbles Head, west of Lundy Island. 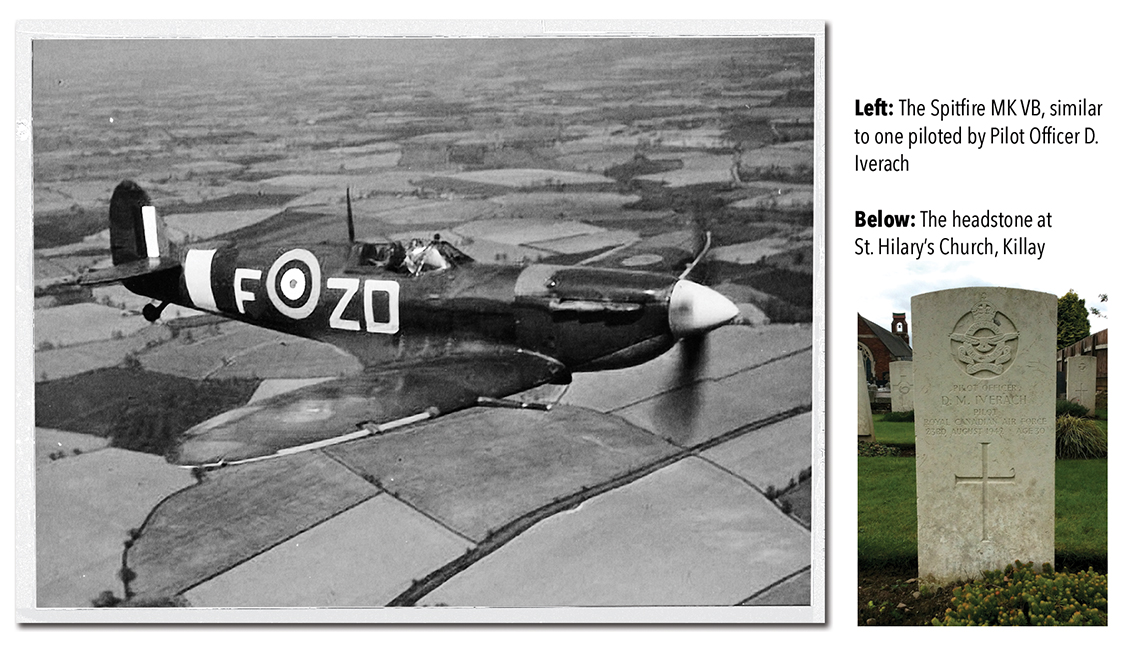 The Dieppe Raid was also launched on the 19th August 1942, and one of those pilots giving support to the Canadian Forces was Pilot Officer D. Iverach. On 23rd August Iverach was flying a Spitfire MK VB and practising dog fighting tactics with another spitfire, when his aircraft started a long dive. An eye-witness, Emrys Jones, of Great Lunnon Farm, Parkmill, Gower whilst out cycling watched the aircraft’s descent, hoping that the pilot would pull up. The dive of over 6,000 ft turned into a spin, and the plane came down on Cefn Bryn Common. To Jones’ surprise the plane was still intact, the pilot, Iverach, was dead slumped forward in the cockpit. 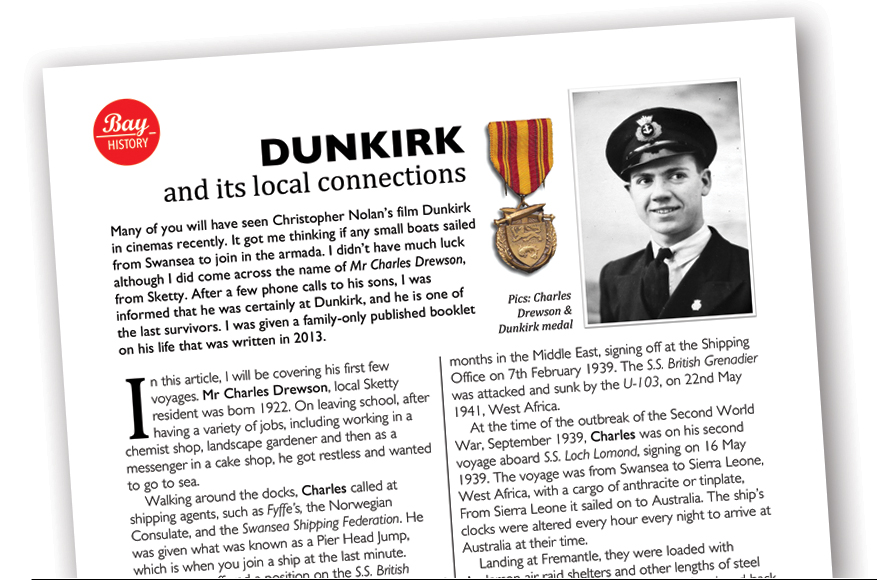 D. Inverach was a member of the No. 421 Squadron, a unit of the Royal Canadian Air Force which was also based at RAF Fairwood Common. He was the squadron’s first casualty since its formation in 1942. He is also buried at St. Hilary’s Church, Killay.

Since the publication of Dunkirk and its local connections, in September’s 2017 Bay magazine, Mr Charles Drewson, the last surviving veteran of Dunkirk from Swansea has sadly died aged 95.