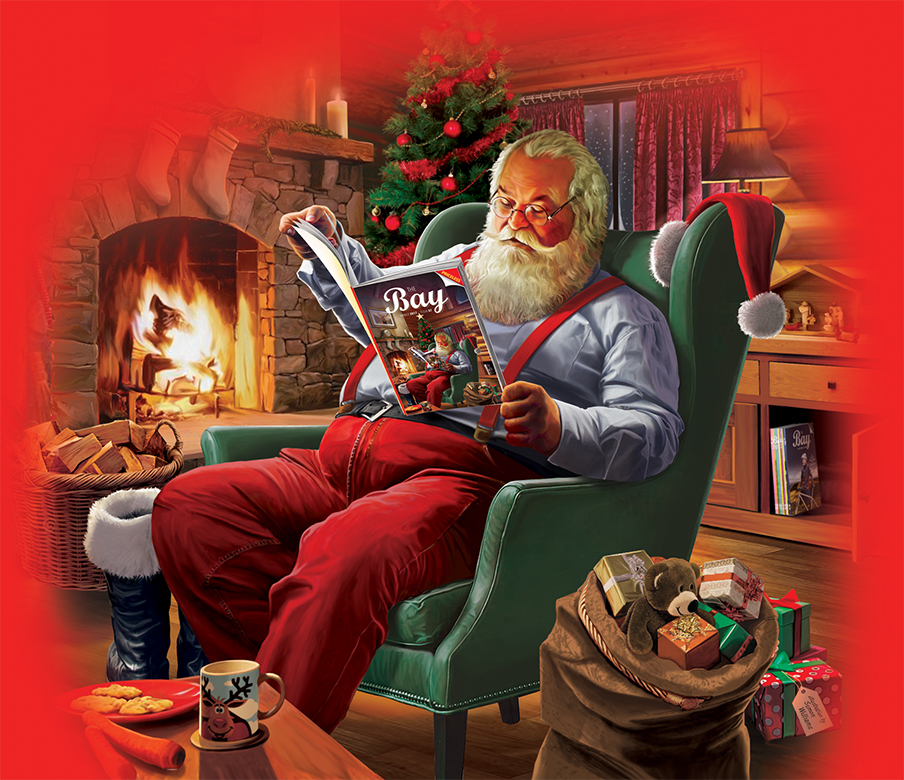 Throughout 2017 Bay’s front covers have featured one of our many contributors, each illustrated by our in-house designer/illustrator Simon Williams. This month we have chosen to feature a gentleman who is loved by children and adults around the world.

Santa Claus, St Nicholas, Father Christmas, Kris Kingle, call him what you will, it doesn’t really matter as we all know him for appearing in December and bringing gifts and sweets to those children who have been good throughout the year.

The Santa that we know today, grew out of the traditions surrounding St Nicholas, a 4th century Greek bishop, although it is said that there are some elements of the Norse god Odin who is associated with the pagan midwinter event of Yule.

He leads a very busy life; for 365 days of the year, he’s overseeing the elves in the workshop and looking after his nine reindeer, Dasher, Dancer, Prancer, Vixen, Comet, Cupid, Donner, Blitzen and of course everybody’s favourite, Rudolph.

Our Santa is depicted sitting reading this copy of Bay – he’s probably enjoying the article on the North Pole by Nick Smith. But he better not get too engrossed as he has a hectic schedule ahead of him.

Don’t forget to write to him, to let him know what you’d like in your Christmas stocking this year.

Here’s his address. Don’t forget to put a stamp on your envelope and include your name, address and postcode. Make sure he gets it by 8 December so that the elves have got time to make your present.