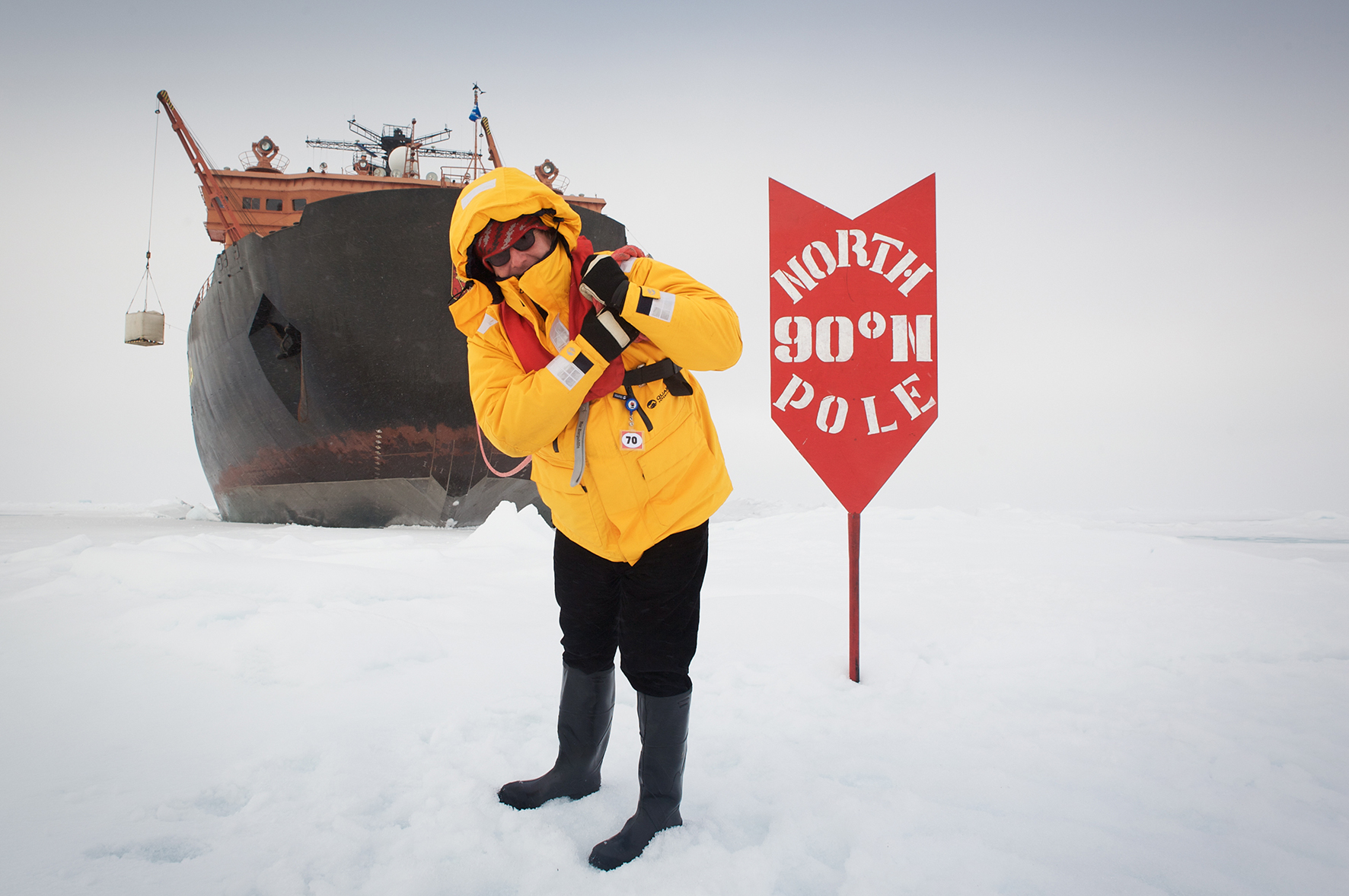 The 75,000 horsepower icebreaker ’50 Years of Victory’ parked in the pack ice close to a ceremonial North Pole approximately 5 miles from 90 degrees north. As the ice moves in the sea currents ‘negative drift’ takes you away from the pole (all directions are south and consequently ‘away’). The man in yellow is Bay’s Nick Smith, who is wearing wellington boots. That’s what they are wearing at the Pole these days…

It may have passed into folklore as the home of Father Christmas, but the North Pole has plenty going for it beyond its fairy tale reputation. Bay’s Nick Smith took a twin nuclear reactor icebreaker to the very top of the world to see what all the fuss is about. As you might expect, the North Pole is isolated, cold and inhospitable. But it also provided the adventure of a lifetime with plenty of surprises thrown in. 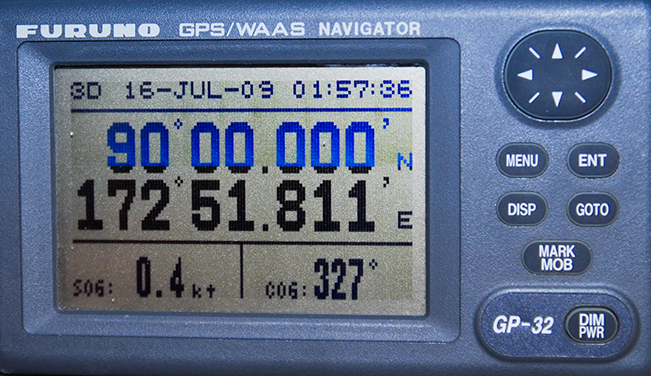 Display readout of the Victory’s official GPS system. Reaching the Pole can only be declared by the ship’s captain, Dmitry Lobusov, who ‘boxed’ the pole by steering the ship’s entire length several times over 90 degrees 00 00′ N to confirm the reading

My mountaineer friends often tell me that there’s no feeling better than standing on the summit of Mount Everest, looking down from the ‘roof of the world’, knowing that apart from the clouds everything you can see is beneath you. Some say it’s humbling. Others say that it is a spiritual moment in their lives. And this is how I thought I would feel when I finally stood at the Geographic North Pole. Ninety degrees north. Where the Earth’s rotation meets the surface. What the poet T S Eliot was moved to call ‘the still point of the turning world.’ 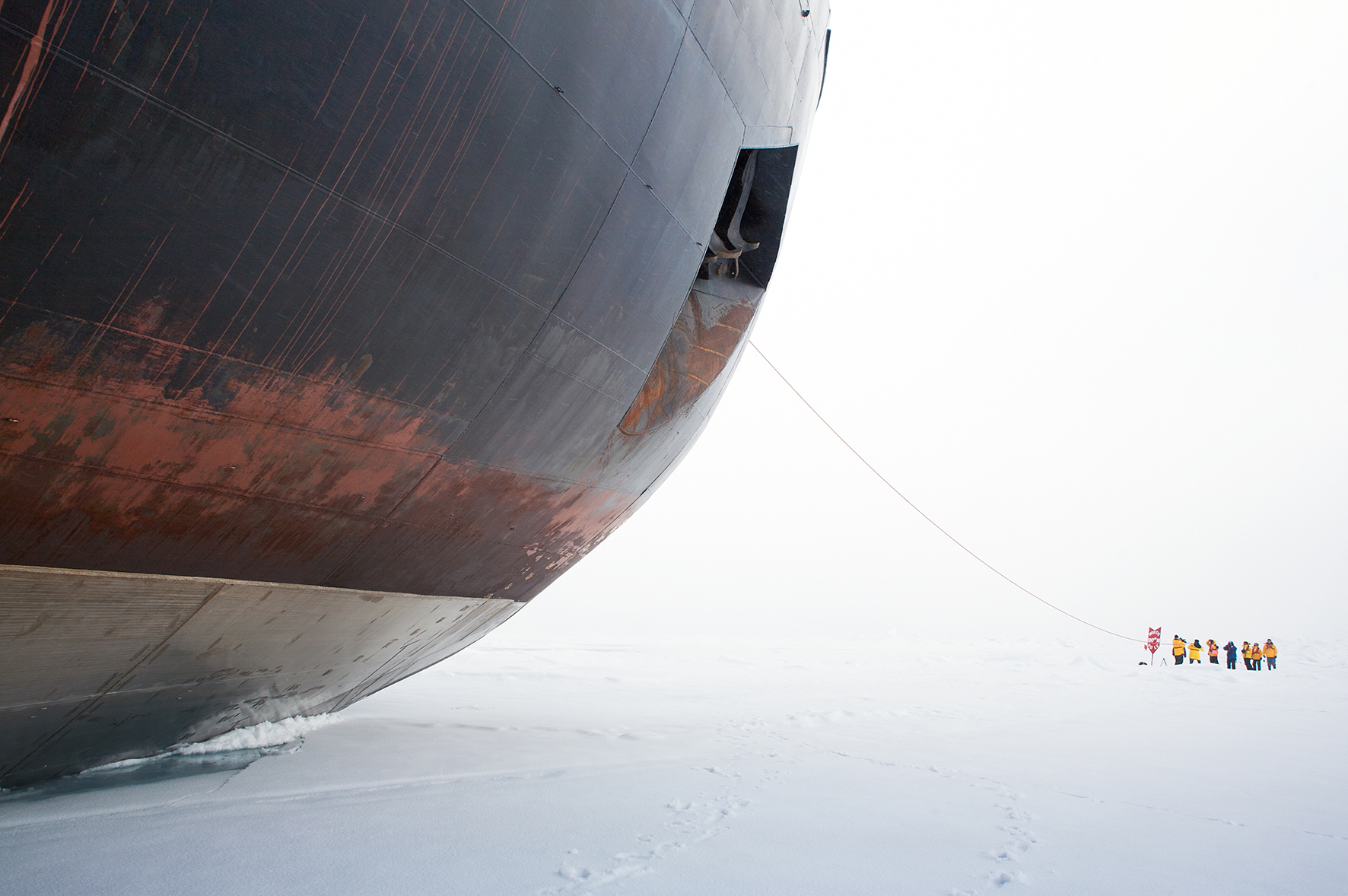 Victory towers over a ceremonial North Pole. This picture was shortlisted in the International Travel Photographer of the Year awards

Of course, T S Eliot had never set foot at the top of the world. Otherwise he might not have waxed so poetical. And that’s because, unlike all the other places I have been to, the North Pole isn’t really a place at all. It’s just one of two points on the globe where the imaginary lines of longitude meet. There is no land there: in fact, the Arctic is sometimes described as a frozen ocean surrounded by continents (while Antarctica is the opposite, a frozen continent surrounded by ocean). And there is no permanent marker to say ‘you are here’. There might be pack ice you can walk on, but increasingly the probability is that there will only be inky black water. What this means is that you won’t see any land mammals such as polar bears up there, and there are few birds. In a nutshell, it is bleak, cold and boring. 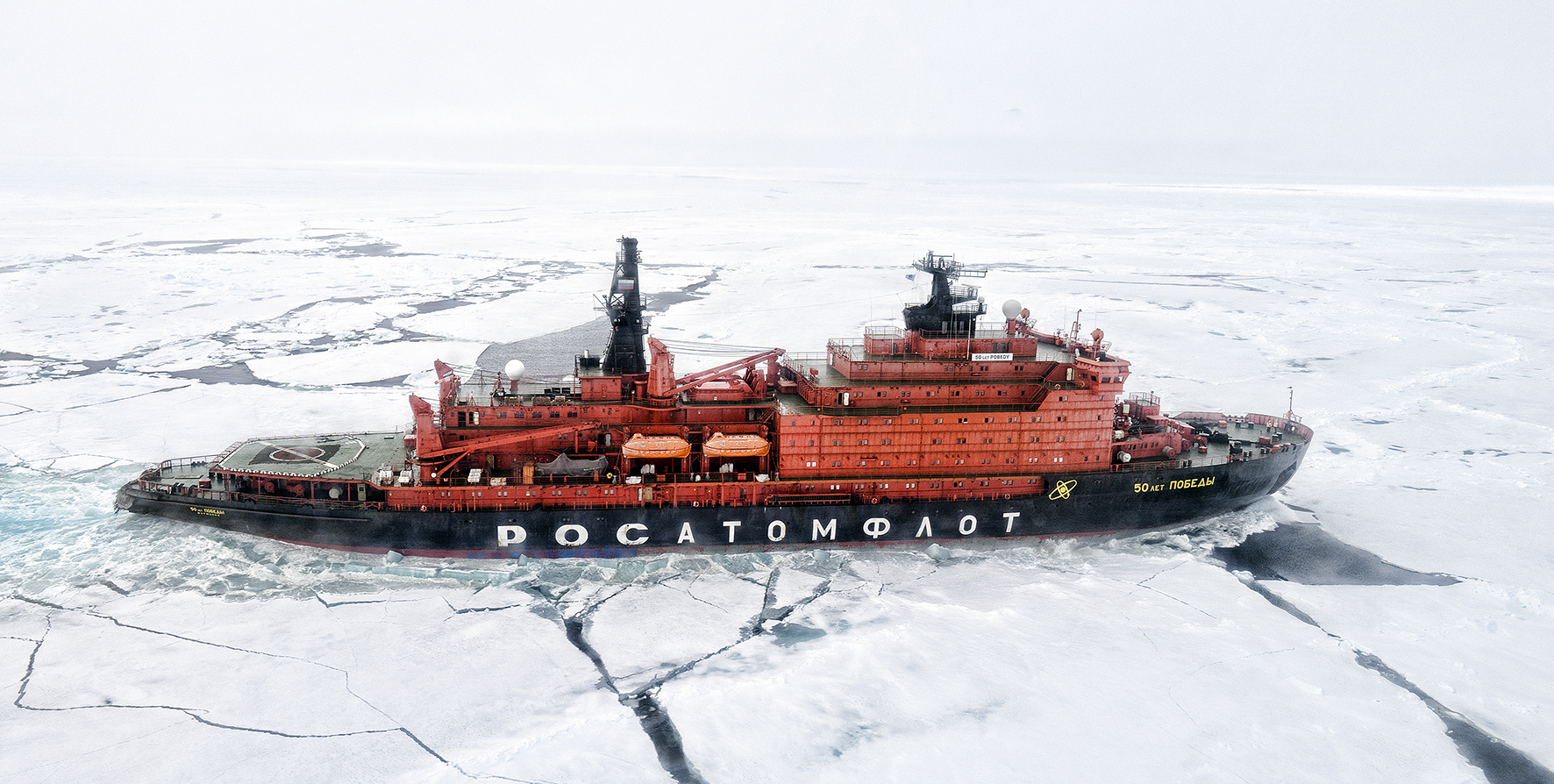 Well, if you believe that last bit, you’re probably a bit bleak, cold and boring yourself. This is because the North Pole is one of the most extraordinary places on earth. When I got there, the crew of my ship – the ’50 Years of Victory’ – made a circle around the Pole with a kilometre-long red rope. They then put a whopping red paddle in the ice at the exact point where all the lines meet up. Stand there for a moment and then look around you in every direction south. That’s right. Every direction is south. 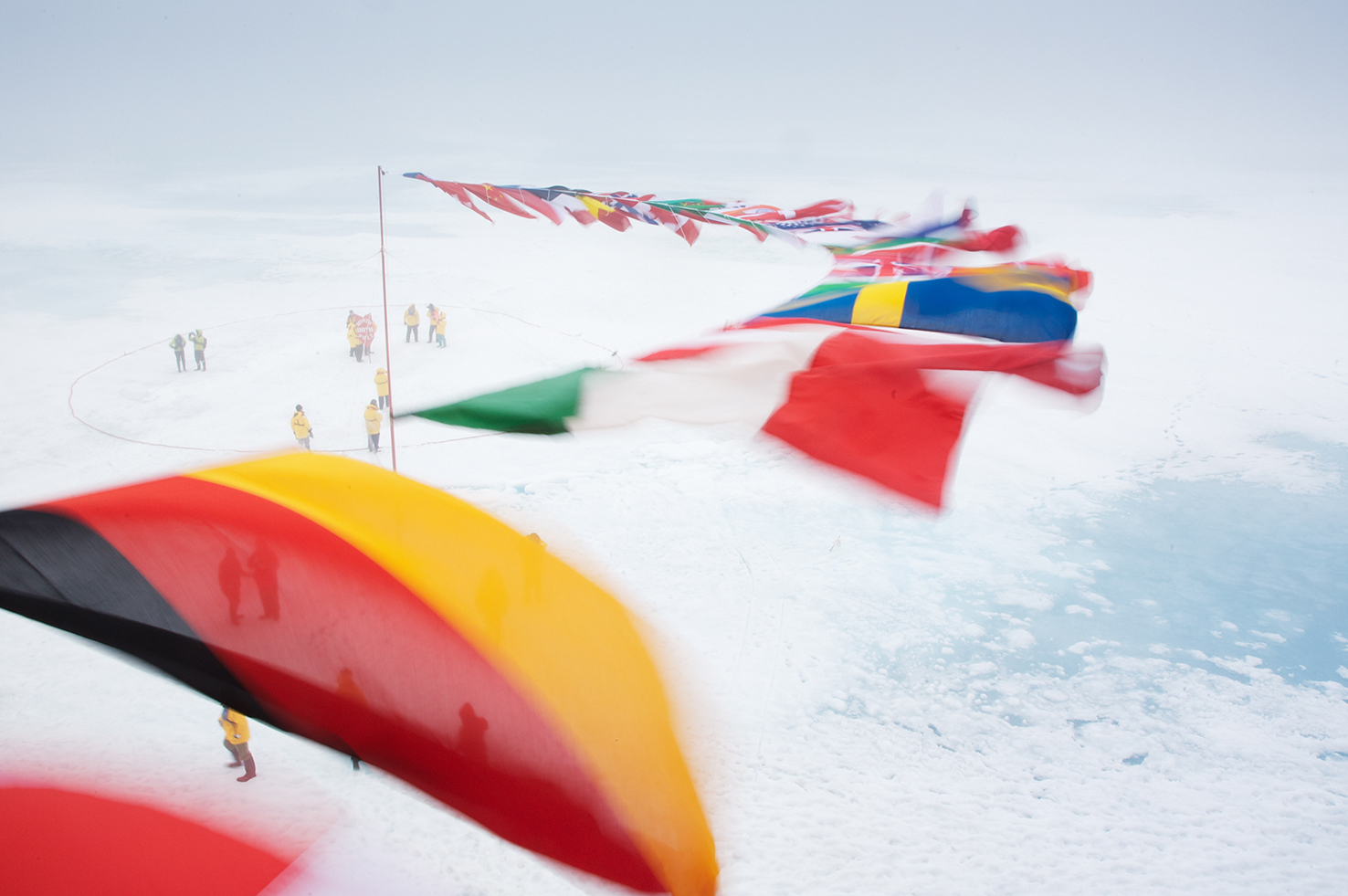 At the actual Geographic North Pole, flags representing the nationalities of every passenger and crew member were flown from the ship’s mast to another mast erected at exactly 90 degrees 00 00’N

Take a moment to walk around the paddle. You will now have gone through every time zone in minutes while crossing the dateline. Look up, and there is nothing above you other than Polaris, the North Star. Look down and directly beneath your feet, after a couple of metres of sea ice, there are 4,000 metres of sea. Then, after 14,000km of planetary mass, you will reach sea level at the South Pole, after which there are another few hundred metres of rock, followed by 2,835 metres of permanent ice.

If you’ve kept a straight line downwards you will emerge in the middle of the geodesic dome of the Scott-Amundsen science research base at the South Pole. Only don’t expect much of a welcome. The people who work there are scientists and are notoriously hostile to curious visitors who are merely exploring. 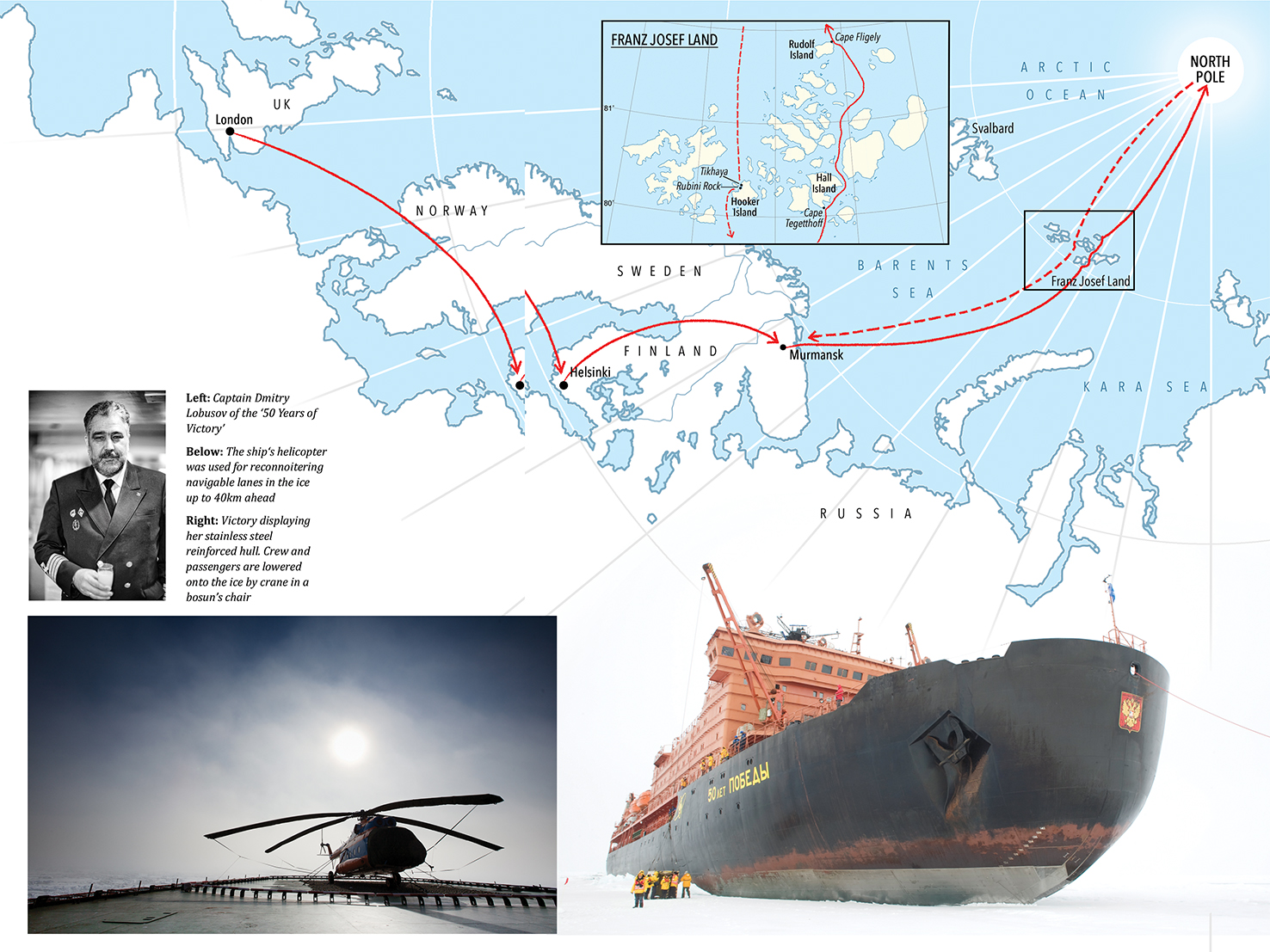 The significance of this intersection of lines of longitude depends as much on how you got there and what you’re up to as anything else. I’d gone along as a stowaway for the Daily Telegraph newspaper, who’d asked me to report on what it was like to go cruising to the top of the world. How I got there was by flying from London to Helsinki to Murmansk, before boarding an old Soviet twin nuclear reactor powered icebreaker and bludgeoning my way north. Victory is a marvelous old ship that was designed in the Communist era to keep the northern shipping trade lanes open in the winter months, and with 75,000 horsepower under the bonnet and a gigantic ‘ice-tooth’ embedded into the prow beneath the water line, she simply blasted her way to the pole. Of course, it was a bit more refined than that. Chief man on the bridge, Captain Dmitri Lobusov of the ’50 Years of Victory’ told me that while there was nothing that could stop our progress, the task in hand was made easier if you could avoid expanses of tough ancient pack ice.

To do this, he sent a helicopter ahead to scan for open water and lines of weakness that we could follow. Power, it turned out, wasn’t the issue.

These icebreakers can get from the coast of Russia to the Pole and back on a few ounces of nuclear fuel (‘less than the weight of an apple’).

The issue was getting the passengers there in one piece.

Forging through the Arctic ice can sometimes feel like a deadlocked arm-wrestling match. When the ice finally breaks under the pressure, the ship lurches forward and anything that isn’t bolted down – including humans – goes flying. The most common injuries in the ship’s infirmary are bone fractures. I knew this because I spent a miserable morning in the sick bay being treated for a mosquito bite I’d picked up in Murmansk that was threatening to go septic. The doctor drew a line in marker pen on my arm. “If the swelling goes beyond here we’ll have to send you back to Russia by helicopter,” said the medico. “What shall I do?” I asked. “Make sure it doesn’t go beyond here,” he replied, grimly pointing to the line.

For centuries people have wanted to visit the North Pole, and while the record books present a cut-and-dried outcome for who was first at its southern counterpart – it was the Norwegian explorer Roald Amundsen who pitched up there on 14th December 1911 – the issue up north is far from clear. American naval officer Rear Admiral Robert Peary said he got there with dogs as far back as April 6th 1909. His claim is still widely disputed, apart from in the United States, where he is idolised. Here in the UK, we think that Peary could have been off by as much as 150km, so no record. We prefer to think it was British explorer, Wally Herbert who undisputedly arrived there exactly 60 years to the day after Peary claims he did, on April 6th 1969. But, if only it were that simple. Russian expedition leader Alexandr Kuznetsov and his team landed three Lisunov Li-2 aeroplanes at 90 North on April 23rd 1946. So he’s the first person to set foot at the pole? Maybe, maybe not. The annals of exploration tend to have selective amnesia when it comes to both Russians and aeroplanes. Also, we can’t rule out the strong possibility of there being military submarine missions to the pole during the 20th century. For the record, I was the 22,500th officially recorded human to set foot on the North Pole. I was slightly surprised that there had been so many. But when you think about it, there have been plenty of scientific and military expeditions up there, as well as an increase in nuclear powered tourism. 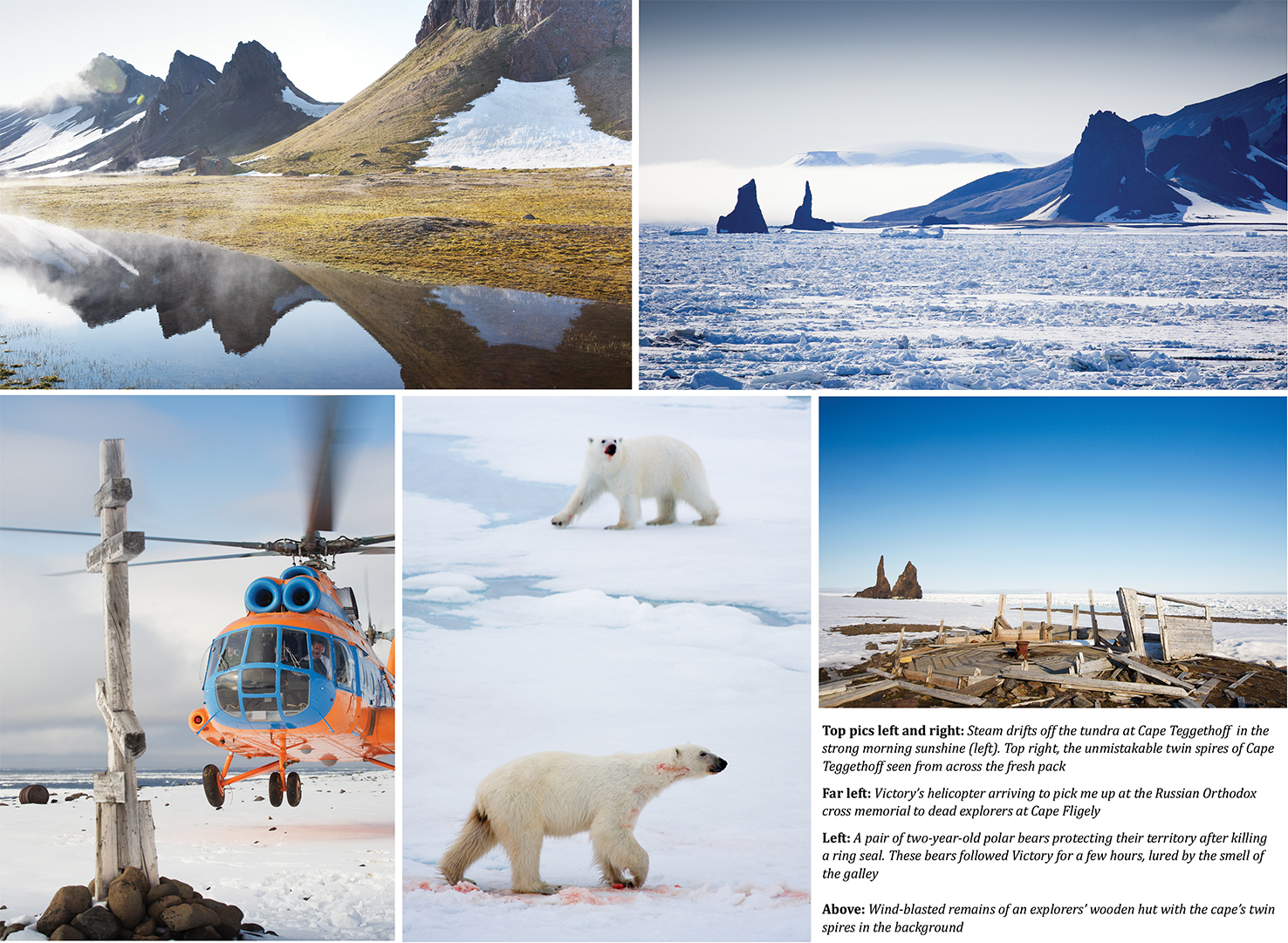 If arriving at the pole is one of those unforgettable moments in life, then the journey there and back again is bordering on being just as exhilarating. On departing Murmansk, we sailed for a week to Franz Josef Land, the northernmost of the Russian archipelagoes, making landfall at Cape Tegetthoff, where I photographed the wind-blasted remains of explorers’ huts.

Then to Cape Fligely on Rudolf Island, from which my namesake Kuznetsov (the Russian word for ‘Smith’) departed on his successful flight to the Pole. We saw polar bears, kittiwakes, ivory gulls and memorials to dead explorers, before eventually arriving at what polar adventurer Pen Hadow describes as ‘a pinprick of nothingness in the middle of nowhere.’ After our celebrations at the Pole we realised that we’d drifted five miles and so set up a ‘ceremonial pole’ (there are lots of different types of pole), where we listened to disco music and ate barbecue on the ice. My grilled chicken was the first bird I’d seen for days.

Returning via Franz Josef Land – we sailed ‘downhill’ through the wake of our own broken ice – we went first to Rubini Rock on Hooker Island. It’s said that there are 30,000 pairs of sea birds colonising this basalt monolith. On seeing so many in the air at once, my first reaction was to gaze upward, open-mouthed in awe. My second reaction, understandably I thought, was to close my mouth because within minutes the formerly pristine deck of the Victory was covered with a thick white sheet of what I’ll politely call here guano. After the quiet of the Pole, the noise of the sea birds at Rubini Rock was deafening, a noise that soon receded into eerie silence at the ghost town of a scientific research station at Tikhaya Bay, deserted since the early 1960s. It was here that I photographed an abandoned fishing boat, where its paint had been whipped clean off by the wind. Hooker Bay is an inhospitable place, and being a meteorologist there must have been an extremely hard life. Being a meteorologist’s dog must have been even harder. The empty sled-dog kennels are still there, facing out over the bergy sea, miles away from anywhere.

And this is the point of the story where writers like to explain that there is nothing left to report other than it was all plain sailing from here on in. Indeed it would be nice to say so, but we were repeatedly ‘buzzed’ by Norwegian jetfighters that were trying to get us to change course once we’d cleared Franz Josef Land. Captain Lobusov was having none of it, and with jaw squarely set he carried on calmly, despite the fact that he was by now also having to deal with a telex in his hand from the Russian authorities informing him that there was missile testing in the area that day. He swore in Russian, and when I went to his cabin for vodka later in the evening, he told me that nothing would intimidate Victory. She was his pride and joy, and the pride of Russia was at stake.

Well I hadn’t expected that. And neither did I expect to feel quite so disappointed to return to the mainland, because nothing beats a fortnight of high adventure in the High Arctic. For a place that is literally nowhere, there seemed to be plenty going on.