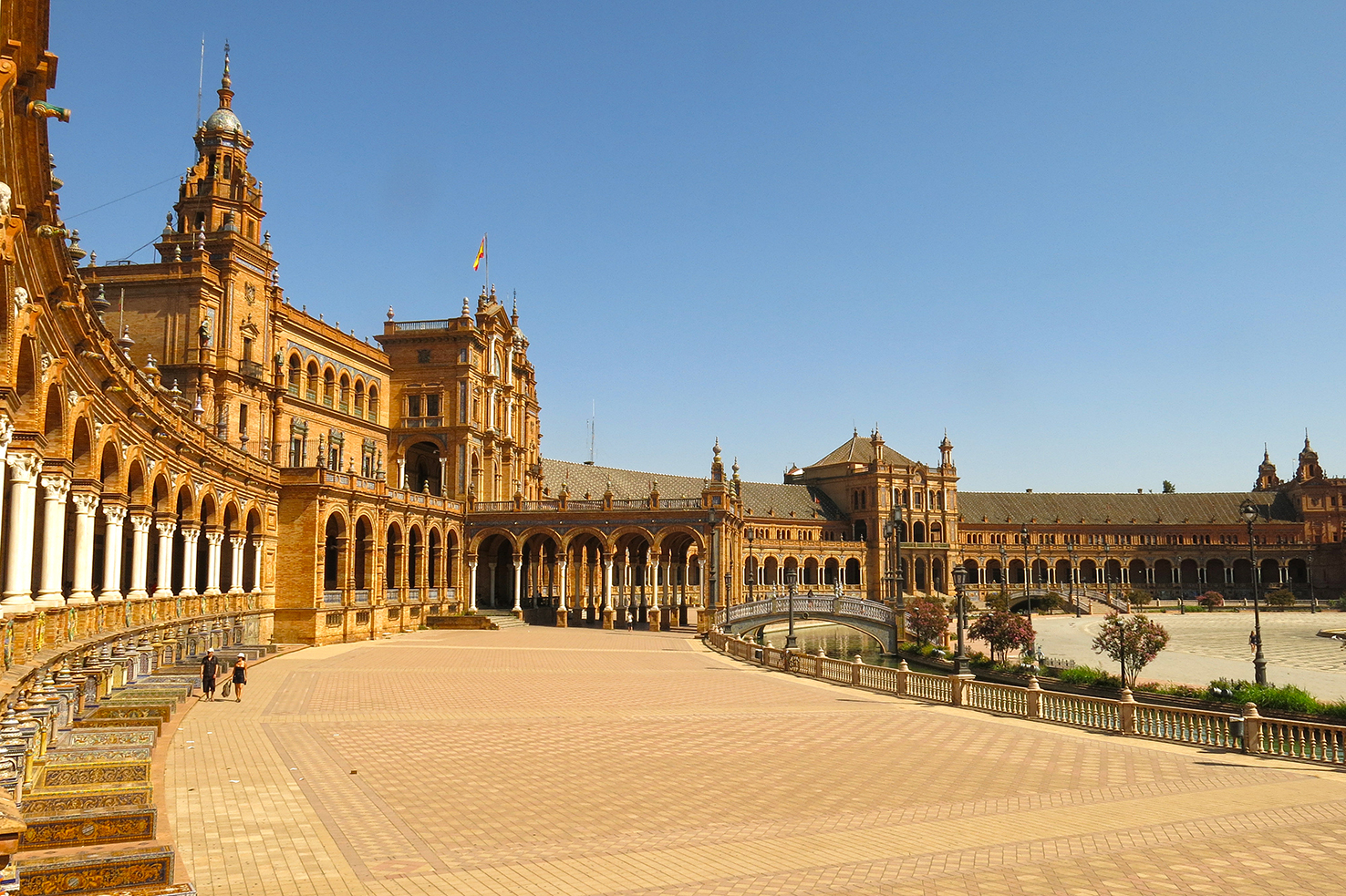 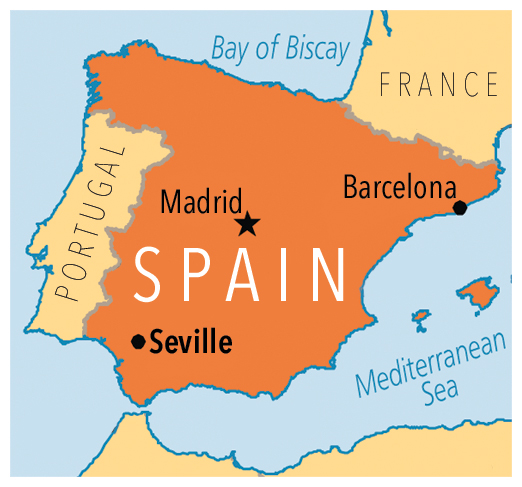 As I sit at my computer on a frosty January morning, hands around a steaming mug of coffee, I long for the warmth of last July and the days I spent visiting Seville, the capital of southern Spain’s Andalusia region. In temperatures reaching the mid to high 30s with skies of deep blue, to stay cool I then held a large glass of rich red sangria, orange slices colliding with ice cubes.

Legend has it that Hercules founded the city over 3000 years ago; when the Romans governed it, it was known as Hispalis then later it was called Ishbilyia under Muslim rule. 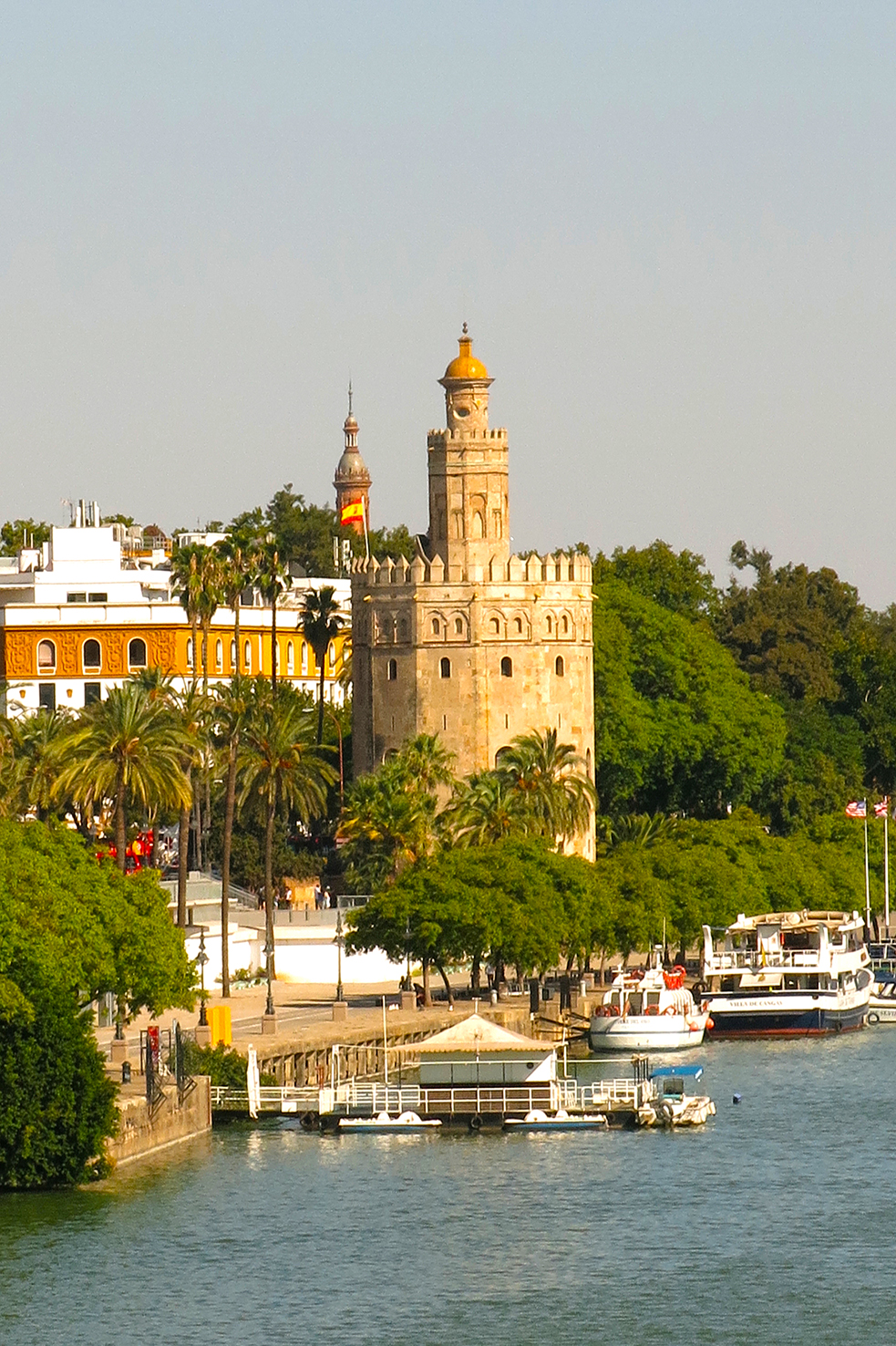 Wide boulevards taper into cobbled streets with intimate squares, and a skyline of churchtowers, domed roofs and Gothic architecture. The River Guadalquivir runs through this charismatic city, and along the river footpath stands the 13th Century Almohad watch tower (pictured left) also known as the gold tower as it used to be covered in golden tiles – it now houses a small maritime museum and a viewing platform.

A city of many landmarks, fans of the TV series Game of Thrones may well recognise the Alcazar, a featured location. Originally founded as a fort for the Governors of Seville in 913 it has been reconstructed and expanded on numerous occasions; under the Moorish Alhomad dynasty in the 13th century a palace was added. Today it is one of the oldest European palaces still in use.

Leaving the hustle and bustle of city life behind, you enter the vast Patio de la Montera (the hunting Patio). The Alcazar is a fusion of architectural styles created by Islamic and Christian craftsmen and is simply breathtaking.

An immense wooden door dating back to1366 opens into the Hall of Ambassadors. Once inside your eyes are immediately drawn to the gold domed ceiling decorated with geometrical designs which represent heaven. In the Courtyard of the Maidens, marble walls are intricately carved like delicate pieces of lace. Symmetrical arches and columns are reflected in the waters of the sunken pools in the surrounding gardens. 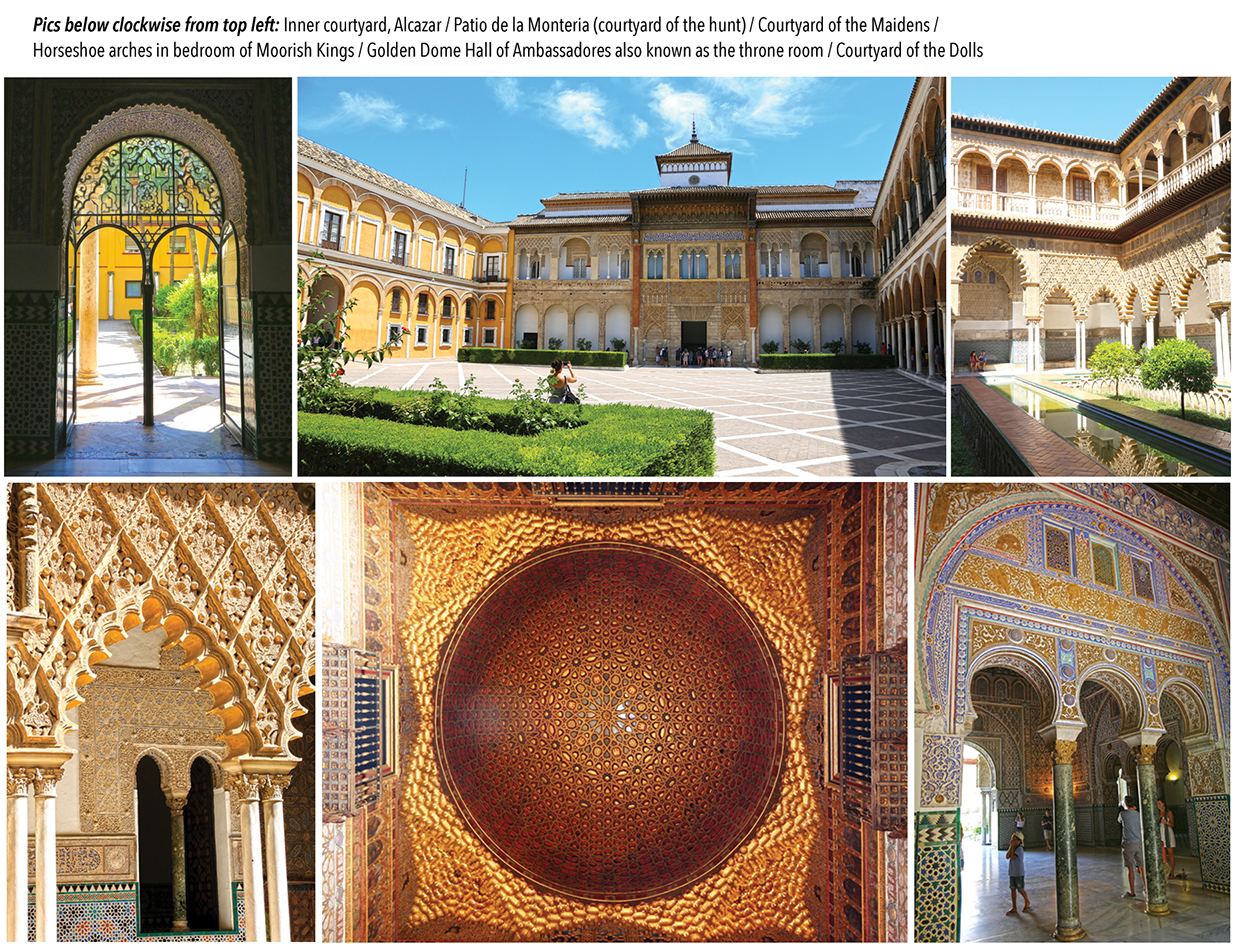 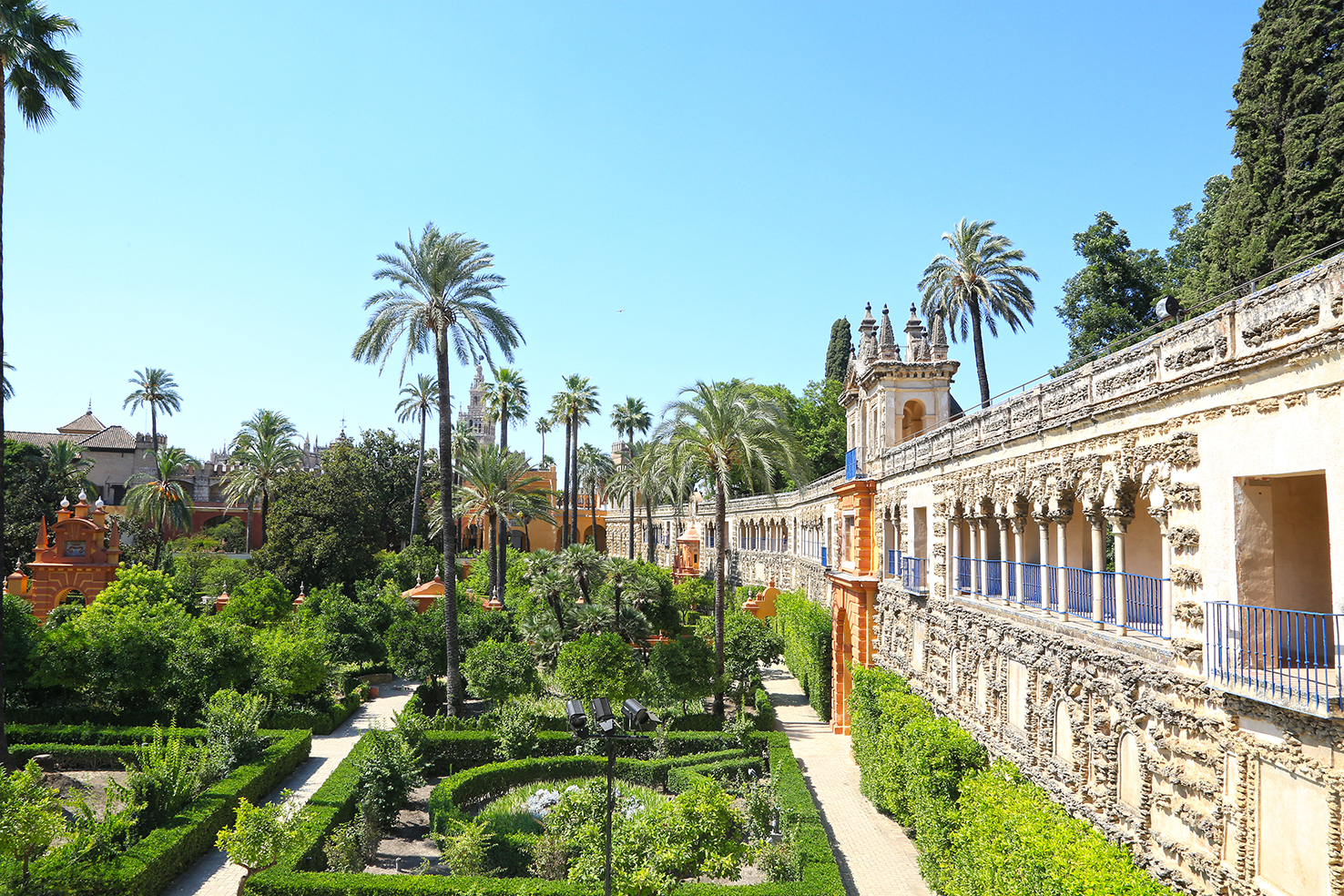 The sweet scent of white jasmine drifts through the windows that open onto inner courts decorated with ceramic urns cascading with flowers. A labyrinth of walkways lead you through the gardens and leave you in anticipation of what the next corner will reveal. Galeria de Grustesco is a raised gallery with porticoes that offer amazing views above elegant palms, gushing fountains and ponds filled with carp.

Seville is also home to the largest Gothic Cathedral in the world which was originally built as a mosque in the 12th century. At night it is illuminated, and casts an ethereal glow across the streets lined with cafes and tapas bars. The Giralda – the minaret for the mosque is capped by a Baroque belfry which is reached by a series of ramps built to enable the guards to ride their horses to the top. 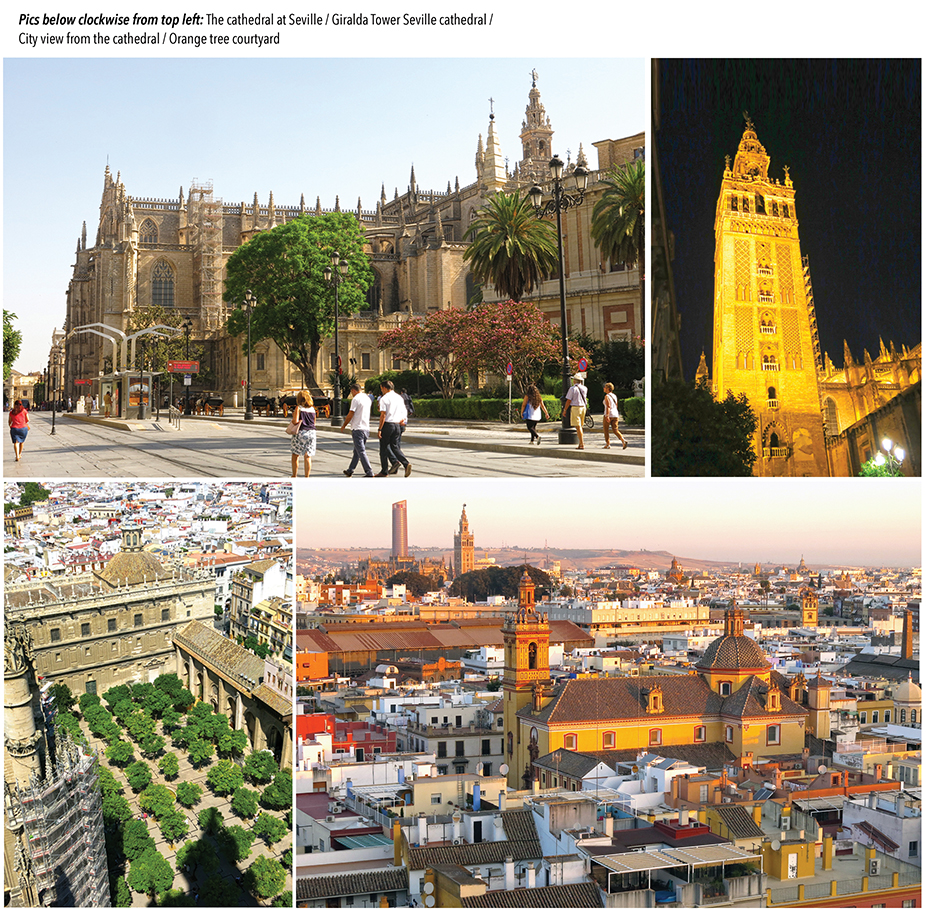 At a height of over 104 metres the views of the city are spectacular, also visible is the original courtyard of the mosque which has been transformed into a green oasis with 60 Seville orange trees. The interior of the Cathedral is equally impresssive; here lies the tomb of Italian explorer Christopher Columbus. Both the Cathedral and Alcazar are registered Unesco World Heritage sites. 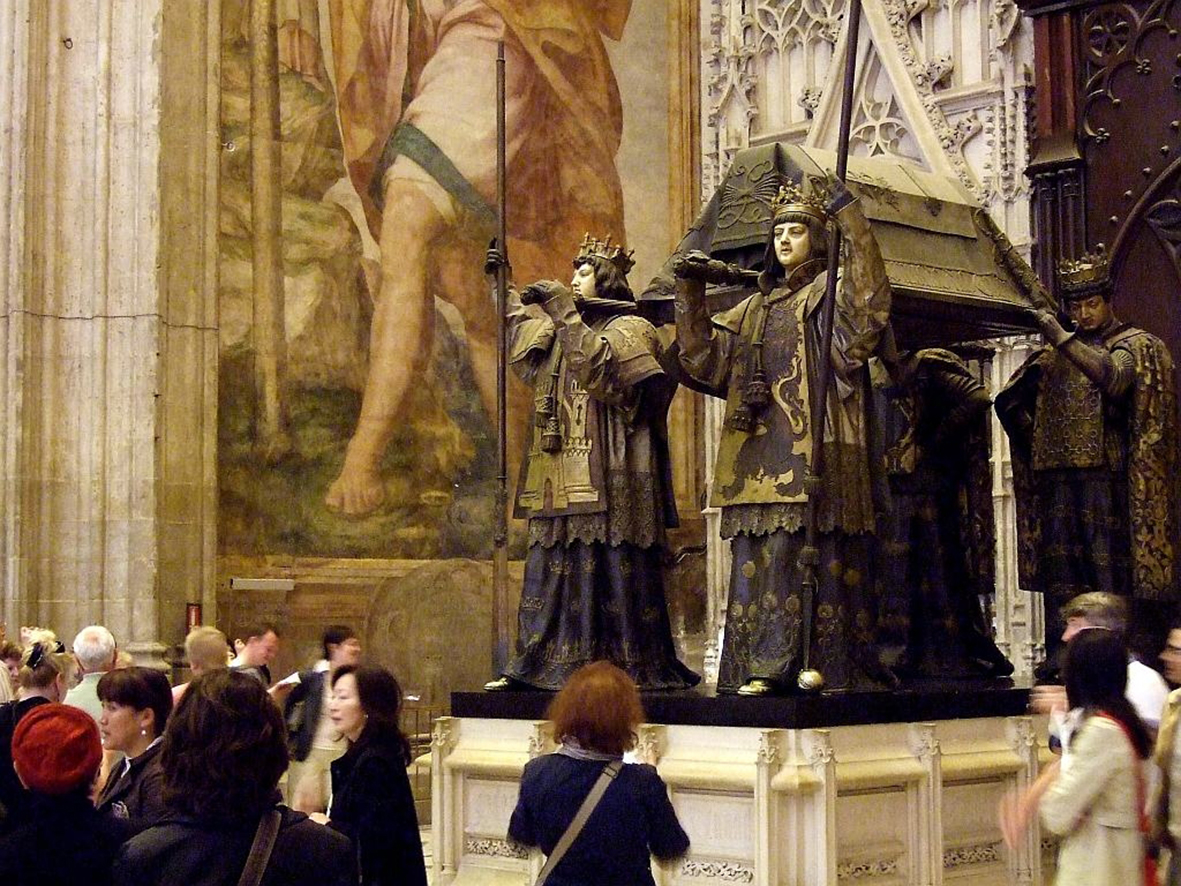 The tomb of explorer Christopher Columbus

Across the Puente de Isabel II bridge on the west bank sits Traina known as Seville’s Gypsy quart-er, a community that flourished with potters, sailors, bullfighters and flamenco artists until the 1970s, when many families were displaced to the south-east of the city to live in Las Tres Mil Viviendas, (translated means three thousand homes) as the area was redeveloped.

Today’s neighbourhood is vibrant and full of character especially when I visited during the festival of Santa Ana, mother of the Virgin Mary, grandmother of Jesus Christ, and Triana’s patron saint. Food stalls with mountains of paella in oversize pans, grilled sardines, octopus and cocktails lined the waterfront. Crowds gathered along the river for another 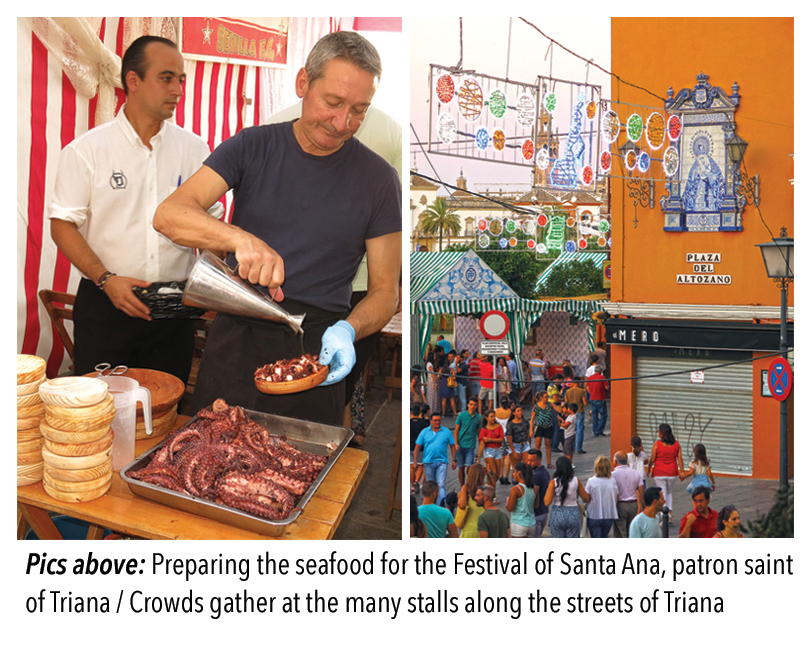 tradition, La Cucana a sport for young men to show off their prowess. A horizontal pole covered in grease hangs over the water on board a boat. The goal is to retrieve a flag attached to the end of the pole, while onlook-ers jeer and taunt. It has to be said it makes for great entertainment.

The district is also celebrated for the ceramic tiles (azulejos), made originally with mud from the river bank. The potteries date back to Roman times and nearly every tile seen in Seville’s churches, homes, bars as well as Plaza de Espana would have been made in Triana. 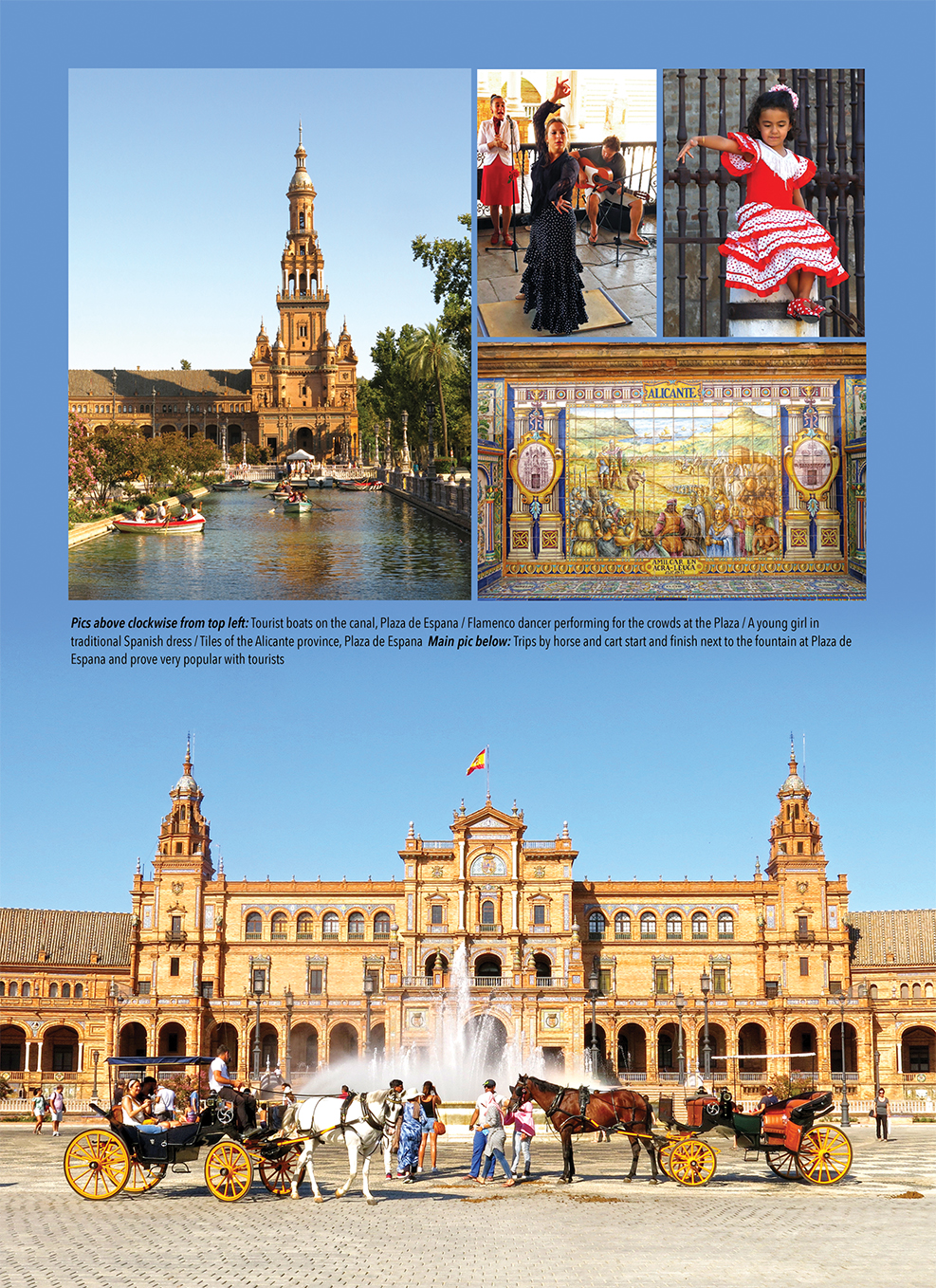 Plaza de Espana sits within Maria Luisa Park, an impressive red brick, painted tiled masterpiece, an ornate semi-circular building with a tower rising at both ends. In front a canal follows the curve of the structure crossed by four bridges which represent the ancient kingdoms of Spain: Castille, Aragon, Navarre and Leon, boats can be rented to row along what is known as the Venice of Seville. There is a series of 48 alcoves which represent each of Seville’s provinces, each one depicts a different scene and a map and is a showcase for the azulejos. Families come here to photograph themselves sitting on their home provinces bench.

A trio of dancers performed flamenco in the plaza, their dark hair piled high, held in place by beautiful combs, fringed scarves draped across their shoulders, their bodies twisting in time to the music.

It’s a Sunday afternoon in Seville that I will remember for a very long time.

Further reading: The Barefoot Queen by Ildefonso Falcones a historical adventure set in 1748 Seville about a gypsy and a slave girl