Hanson’s at The Chelsea

There is much in our news today of obesity in the UK and how we must address it now for fear of breeding a nation of children with health issues. It seems to me that part of the problem originates from the simple issue of ‘treats’.

A recent discussion with my sister revealed the fact that we neither expected nor got sweets, crisps or fizzy drinks on anything other than a once a week treat, high days or holidays. A chocolate biscuit was something to look forward to at Sunday tea-time – just the one though. I remember one occasion when we had one of my father’s colleagues come to tea with his young family. The son took two foil wrapped chocolate biscuits – of course I cried out in consternation only to be hushed by my parents.

I can still remember the indignation that this interloper had got away with something I wouldn’t have dared ask for.

But my point is that today crisps, sweets and fizzy drinks are given as part of some children’s everyday diet, which not only causes weight issues but also raises the question – what do you give them as a sweet treat?

I like to have things that I can turn to as a mark of a special occasion – and it was with this in mind that I booked a table at Hanson’s in St Mary’s Street to celebrate my sister’s birthday. Chef owner Andrew Hanson trained at the Ritz Hotel in London but fortunately for Swansea he came home. Andrew’s success has seen him being awarded Two AA Rosettes – the only restaurant in Swansea to hold this honour.

The restaurant is intimate – less than 40 covers – with a warm and mellow décor. It’s relaxing and unstuffy – the perfect place to enjoy some of the very best food that the area has to offer. Fish features heavily – and so it should – we are a coastal city. We had a choice of hake, scallops, salmon – smoked and fresh, and haddock in the light-est ever tempura batter. Of course the carnivores were well taken care of with a choice of several different cuts of steak, confit duck, belly pork and chicken.

Every course is exquisitely presented with the little touches and garnishes that only come with the very best in fine dining. Everything has earned its place on the plate – each dish has its own sauce or accompaniment and has a reason to be there.

The reason I like to keep Hanson’s special isn’t because it’s an expensive restaurant – it’s not. Our birthday meal came in at less than £40 a head for a two course meal with two bottles of very good wine – I can highly recommend the Portuguese Malbec. No, the reason it isn’t a regular haunt is because it keeps it special – and I like it like that. 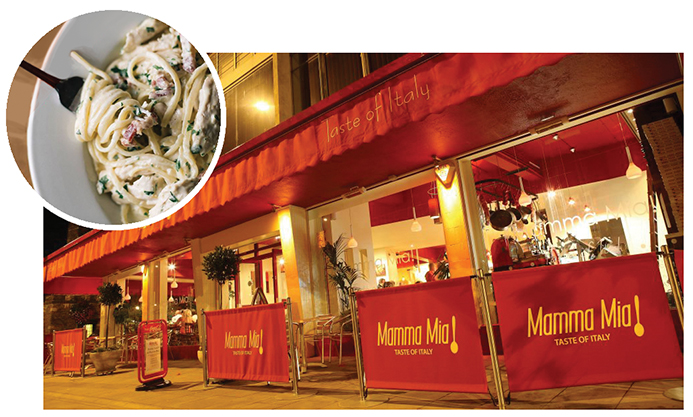 Having had the fine dining experience one week I had to return to my post-Christmas normal eating regime. My aim for 2018 is to eat more sustainable fish and less meat, so when we popped into Mamma Mia in Princess Way for an impromptu weekday supper my eyes were firmly on the fishy dishes.

When it’s cold outside I feel justified in ordering a heart-warming and comforting bowl of pasta – a bowl of crab ravioli with a pesto cream sauce seemed to fit the bill. These little sunflower shaped parcels were filled with a mix of brown and white crab meat with a light dressing of basil-y creaminess. As a certain, and in my opinion very annoying Italian TV chef would say ‘fantastico’.

Continuing with my piscine theme I was drawn to the Brodetto – this is an Italian style bouillabaisse type soup. It comprised of King prawns, calamari and chunks of bright white fish in a light broth – I tried to leave the crusty bread that accompanied it, but my will power was weak.

As usual, my dining companion who is a creature of habit had to go for the creamiest pasta dish on the menu and was making very contented noises when tucking in to his linguine Carbonara. A traditional Carbonara is made simply with smoked pancetta, eggs and Parmesan – it gets its name from the Umbrian coal men (carbonari) who came to sell charcoal to the Romans. This wasn’t a Carbonara for purists as it contained crème fraiche – but Simon wasn’t going to argue and all but licked his plate.

Mamma Mia is the sister restaurant of Langland’s Brasserie, which is another of my favourite restaur-ants. There is plenty of fresh fish on the menu here too, with the added bonus of a sea-view to boot. 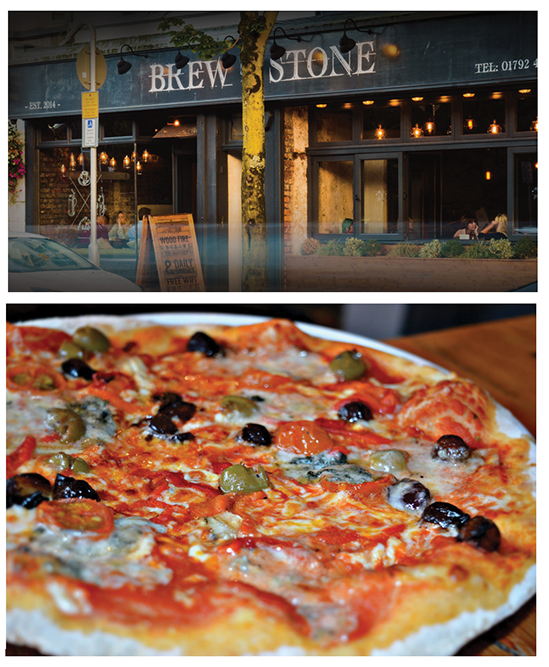 Many years ago there was a hotel restaurant in Mumbles that was a favourite of ours for two simple reasons. Firstly it was where Simon and I had our first meal out together and secondly it served half a roast chicken with chips – his favourite meal. It was so good that we held our wedding reception there – Simon wasn’t happy that we didn’t have the aforementioned chicken-fest as our wedding breakfast – but that’s another story. The hotel has long gone, but one of his favourite meals is still chicken and chips. So a chance visit to Brewstone in Uplands elicited little whoops of joy when he discovered a hot skillet of his ambrosia.

It’s funny how something you’d think was so simple to cook is often very far off the mark – cook a chicken too much and it becomes dry and stringy – not long enough and it doesn’t fall off the bones. Cooked properly it is a thing of beauty – trust me – nobody has cooked as many chickens as me in my 40+ years of marriage. Happily Brewstone didn’t disappoint – crispy charred skin outside and moist, delicately flavoured flesh within, a generous portion of salty potatoes and a couple of chunks of roasted sweetcorn completed the dish.

What sort of pizza do you order for someone who doesn’t like tomatoes? It’s a big problem when you need to share. Brewstone has the answer – Cymru Am Byth – the tomato-less pizza. This delicacy is a thin and crispy pizza base topped with Welsh rarebit, leeks, smoked bacon and smoky cheese and is big enough to satisfy two hungry people when served with half a chicken.

So I guess if we were to re-marry we could hold our wedding breakfast at Brewstone – now there’s a thought.

Edited to say that at the time of going to press Brewstone have changed their menu and are no longer doing half a roast chicken. Happily they have substituted with a whole spatch-cocked baby chicken. Phew.