Few trees are surrounded by more myths, legends and symbolism than the yew, which was already considered sacred in the pre-Christian era. In modern times, science has been able to uncover many of the facts which would have given rise to the yew’s mythical status, and yet this process has only added to the fascination of this remarkable tree, which is known from the fossil record to have existed in its current form for over 15 million years.

Not only is yew (Taxus baccata) the old-est native European tree species, individual yew trees, too, are able to live for an exceptionally long time, with the oldest trees estimated to be between 2000 and 3000 years old and even greater ages sometimes being suggested. The exact age of a yew tree is notoriously difficult to determine because yews have the fascinating ability of being able to replace their old, rotting cores with new wood, which can, in time, take over from the original trunk, making ageing by traditional methods quite impossible. The ages of some planted yew trees can be traced through histor-ical records, however. The ancient yew next to Rycote chapel near Thame in Oxfordshire (photo 1), for example, is known to have been planted in 1135, making it nearly 900 years old.

The growth rate of yew trees slows down consid-erably as they age, and they rarely grow taller than about 20 metres, but, like the Rycote yew, they can grow very wide. Despite its considerable age, the imposing trunk of this tree is still intact (photo 2), with the hollowing and subsequent rejuvenation process, which can take several hundred years, still in its early stages. As the process continues, the tree produces internal roots which slowly grow their way down through the disintegrating core and eventually root into the ground (photo 3). As the rotten wood around them is broken down, the roots grow stronger and take on a covering of bark, turning into new trunks. Eventually, they bear more and more weight and are finally able to take over completely from the original trunk. Unique and captivating shapes can be created in the course of this process (photo 4). It is thought that this hollowing of the trunk has structural benefits for the tree, making it stronger and more flexible and less prone to damage in severe weather conditions. 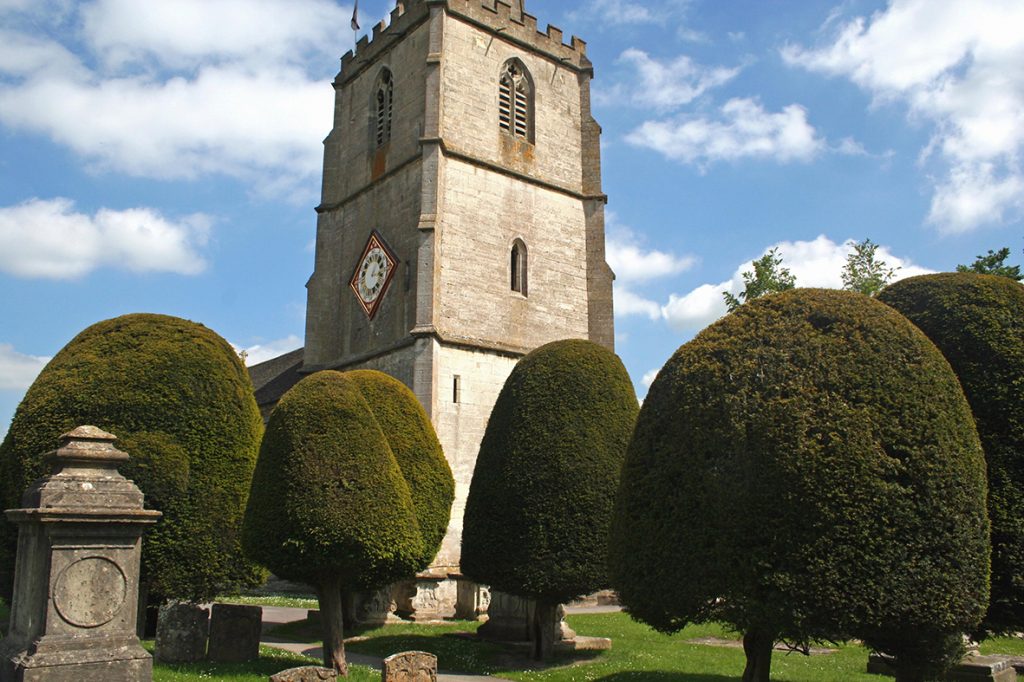 Not only is the yew able to renew itself from the core, it is also able to take root where horizontally growing branches are touching the ground. Over time, the rooted branches can turn into independent trees, giving the appearance of a small grove, but in reality all the trunks are still just a single tree. Unfortunately this process is not seen very often, because nowadays yews are rarely left to their own devices. Instead, they are usually pruned and clipped to varying extents (photo 5). Yews tolerate this treatment exceptionally well, particularly for a conifer, being able to re-shoot from old wood better than many broadleaved trees. Also unusually for conifers, yews can be grown from cuttings.

With all these powers of regeneration, it is not surprising that yews have long been seen as symbols of immortality and resurrection. They have, however, also been closely associated with death. This is due to the fact that they are highly toxic in virtually all of their parts, both to man and livestock. Interestingly, a number of wild animals such as deer are surprisingly resistant to their toxins. Many birds as well as foxes and badgers are attracted by the distinctive fleshy structures (known as arils) surrounding the poisonous seeds (photos 6 & 7). They swallow the fruits whole and pass the seeds undamaged, facilitating the trees’ dispersal. The arils are the only parts of the yew that are not heavily laden with toxins, although even they have been known to cause vomiting in animals which have overindulged.

Only female yew trees bear fruit. Male trees produce small yellow flowers from February onwards (photo 8) which are shed soon after they have released their pollen. The minuscule (1.5 mm) female flowers (photo 9) produce a droplet of sticky liquid with which they capture the pollen from air currents.

In the past, all across Europe yew trees used to be far more widespread and numerous than they are now, often contributing to the under storey of beech woodlands, where their high shade tolerance was allowing them to thrive. The reason why they are a relatively rare sight today is that, for hundreds of years, they were over exploited for their strong yet exceptionally flexible timber, which was particularly favoured for the manufacture of longbows. Yew wood has been used for this purpose since ancient times, with the 5000-year-old mummy ‘Ötzi’, which was found in the Alps in 1991, already carrying a longbow made from yew. 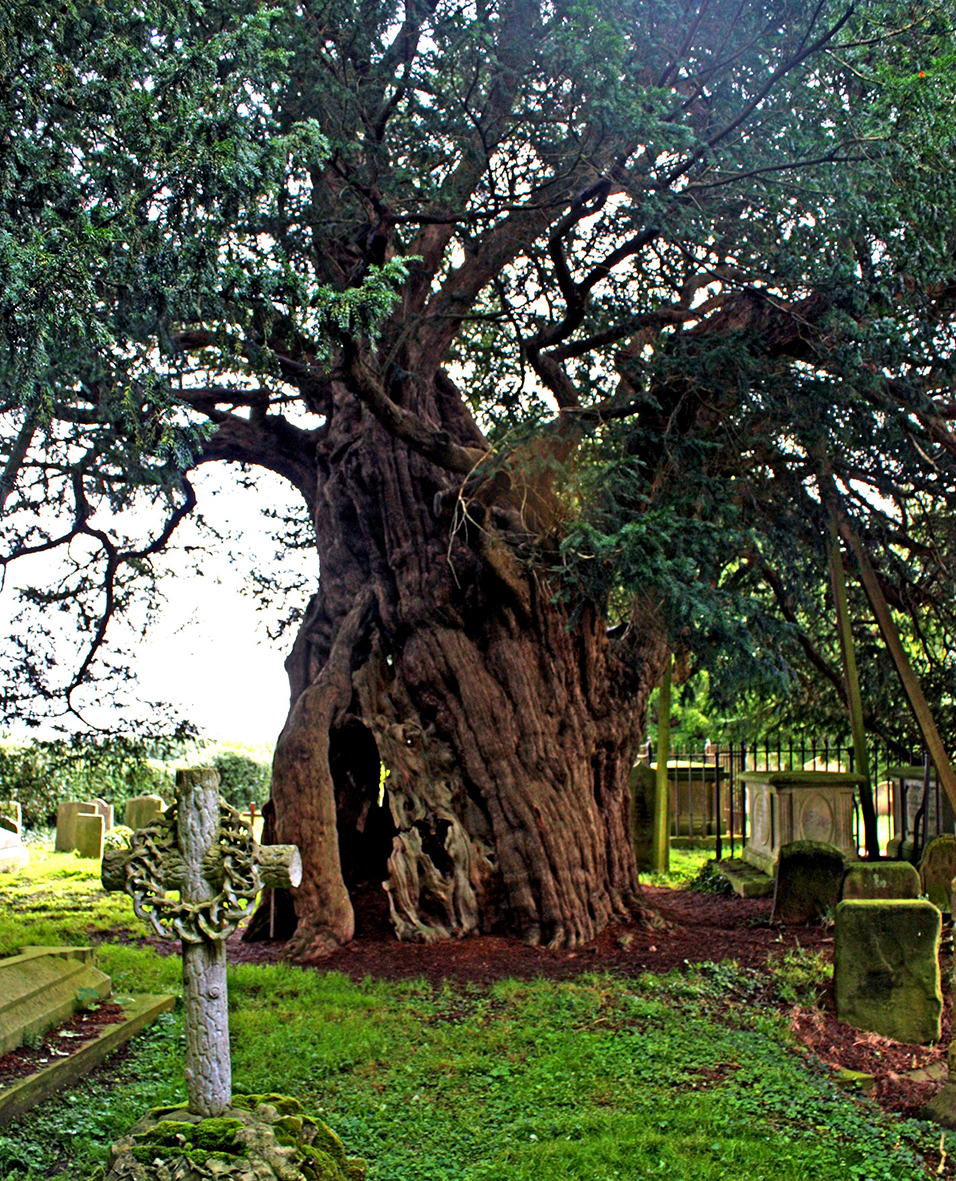 Today, Britain is a stronghold for ancient yews in Europe, some of which, such as the imposing Crowhurst yew in Surrey (photo 10), which is around 1500 years old and has a girth of over 10 metres, attract visitors from all over the world. British yews do not benefit from the same legal protection they enjoy in some other countries, and so they depend entirely upon their charismatic presence to keep them safe from such misfortunes as being ‘tidied up’ or felled entirely on the grounds of being ‘messy old trees’. Hopefully, along with increasing awareness of the yew’s unusual growth habits and abilities, this will be enough to allow them to prevail, so that these spectacular and magical trees will remain with us for a long time to come.

All photographs featured in this article courtesy of Michael Demidecki, Fellow of the British Naturalists’ Associationwww.bna-naturaliste.org