Welcome to a new year of Family History with Charles Wilson Watkins. This year, I am going to cover a variety of topics that I hope will ignite memories that you might have and would like to share with other readers. If there is a topic that you would like to be researched, please drop me a line to my email address, or alternatively contact the editor

In this first article, we are going back to the 6th February 1918, and the Representation of the People Act, 1918. The Act refers to the electoral system and was the first to include all men, in addition for the first time it included some women. This Act, superseded the 1884 Act, which allowed only men who were paying an annual rent of £10 (£1120 today) or owning land valued at £10 to vote. This was a grand total of over 5,500,000 men.

All men over 21 gained the vote in the constituency where they were resident.

Women over 30 received the vote, if they were either a member or married to a member of the Local Government Register, a property owner, or a graduate voting in a University constituency.

By this time the electorate had tripled from 7.7 million in 1912 to 21.4 and 43% of women voted for the first time in 1918. Also introduced for the first time was the annual electoral register. Constituencies’ boundaries were changed, as in the case of Swansea. The Swansea MP at this time was Sir Alfred Mond, the managing director of Mond Nickel Company in Clydach, where during the Second World War, the fine sintered nickel mesh, was manufactured, an element that was used in the atomic bomb that devastated Hiroshima.

This article is about how women finally got the vote in 1918 so let’s start off by looking at the suffragette movement. It was nationally active during the late 19th and early 20th centuries and advocated the right for the vote for women in public elections. Its members belonged to the Women’s Social and Political Union, established in 1903 in Manchester, with ‘Deeds Not Words’, as their motto. The party was led by Emmeline Pankhurst and her daughters Christabel and Sylvia. They are best known for their hunger strikes, breaking windows in prominent buildings, and the night time arson of unoccupied buildings and churches.

During 1906 the group started a series of demonstrations and lobbying of Parliament and for the first time the term suffragettes was penned – in the Daily Mail. Probably one of the most famous suffragettes was Emily Davison who died after being hit by King George V‘s horse Anmer at the 1913 Epsom Derby when she walked onto the track during the race. If anyone is interested in political debates of the time, concerning the suffragettes, they are listed on the Hansard archive. 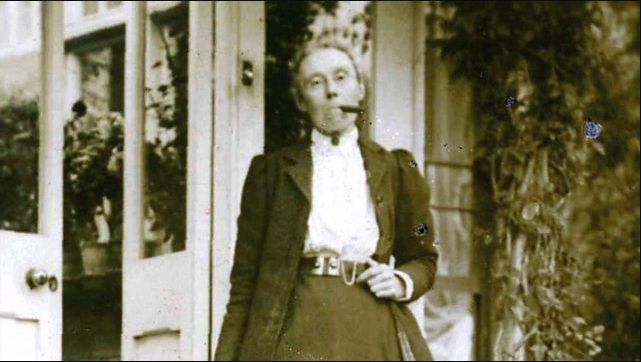 Moving our attention to Swansea, there are four notable pioneering ladies, who were involved in the Suffrage Movement.

Firstly, Amy Dillwyn (left), the novelist, businesswoman and social benefactor, was one of the earliest members of the National Union of Women’s Suffrage Societies, although a staunch member, she rejected the militant actions. She has a blue plaque in her honour, located at her West Cross home, Ty Glyn. 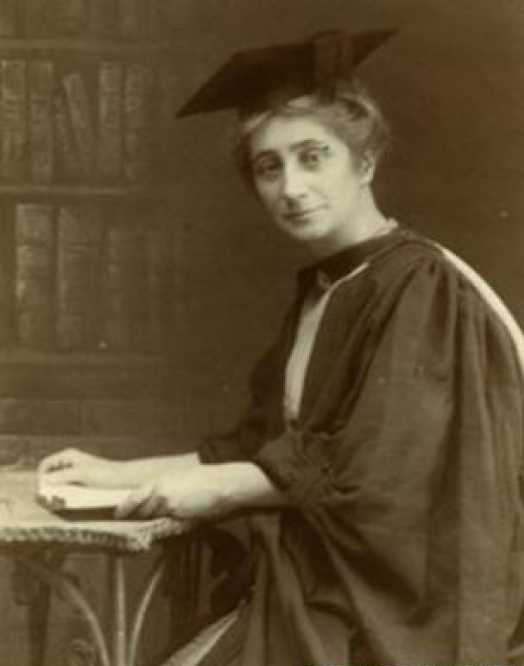 Secondly, Emily Frost Phipps (right) also has a blue plaque situated at Orchard Street, honouring her for being the headmistress of the Swansea Municipal Secondary Girls School, feminist, and inspirational campaigner. It was during an anti-suffrage meeting in Swansea that Phipps joined the Women’s Freedom League in 1908 but unlike Amy Dillwyn, Phipps, and her lifelong friend Clara

Neal were both militant suffragettes. If you were to look for Phipps’ entry on the 1911 census, you will have trouble, as she and other members of the group boy-cottted the census, and stayed overnight in a cave on the Gower Peninsula.

The 1918 general election was the first in which women could both vote in parliamentary elections and stand as candidates, and Emily Phipps was one of the 17 women who took the opportunity to stand, becoming Independent Progressive candidate for the Chelsea constituency. All the women candidates were heavily defeated, but she retained her deposit in a straight contest (with a low turnout) with the sitting Conservative MP, Sir Samuel Hoare. 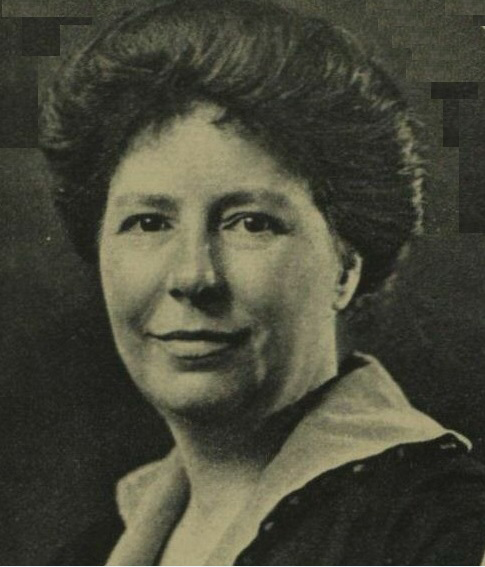 Thirdly, Winifred Coombe Tennant (left). She was an interesting lady, and the official art buyer for the Glynn Vivian. Tennant was also a Liberal politician, philanthropist and spiritualist; however, I am looking at the suffragette side. Tennant was a resident of Neath where she was the president of the Neath Women’s Suffrage Society. It was during the 1922 General Elections that Tennant stood for the Forest of Dean but sadly like Phipps, was defeated to James Wignall.

Finally, closer to home in Sketty, a Mrs Mary Macleod Cleeve, who drew attention to herself during October 1910, when she refused to pay her carriage licence, on the basis that women should not be considered for paying taxes until they had the vote. The cart was put up for sale outside the Bush Hotel, the Women’s Freedom League also held a meeting at the same time, where 300 people were in attendance. The Bush Hotel had only recently been built in 1909.

Do you have any suffragettes in your family who were active during these changing years? 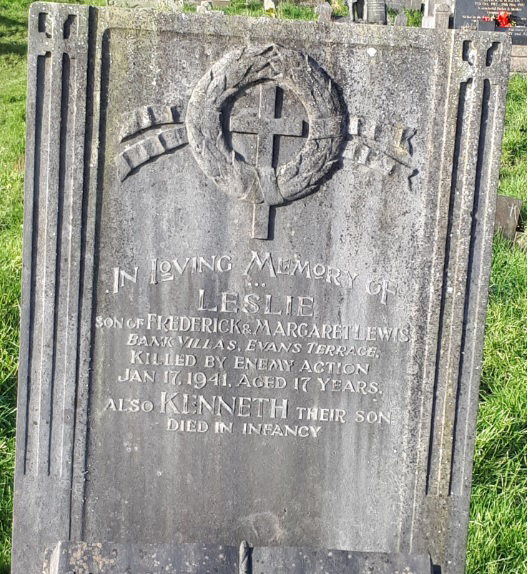 Tracing your family history is often hampered by misinformation and incorrect spelling of names.

So a certain amount of caution has to be taken in order that you don’t go off on a wild goose chase.

Whilst I was home during the Christmas period, I carried out some research work and went to a few of Swansea’s cemeteries. On a visit to Bethel Welsh Congregational Chapelyard in Tycoch, where I was trying to locate a specific grave, (more about this grave will be featured in a future article), the headstone of Leslie Lewis caught my eye and I duly photographed it (right). 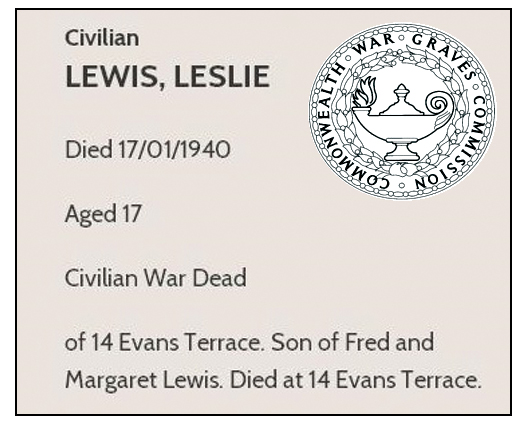 I conferred with the Commonwealth War Grave Commission website (cwgc.org) for further information, and it stated that the year was 1940. I then turned to freebmd.org.uk where the date of death given was 1941.

“The Blitz”, article published in the February 2016 edition of Bay, describes the first air raid on Swansea, to be 27th June 1940, when the Germans drop-ped six high explosive bombs over St. Thomas and a further four on Kilvey Hill. The only damage was to a house on Danygraig Road. That ruled the January 1940 date out.

The article can be accessed via www.theswanseabay.co.uk. 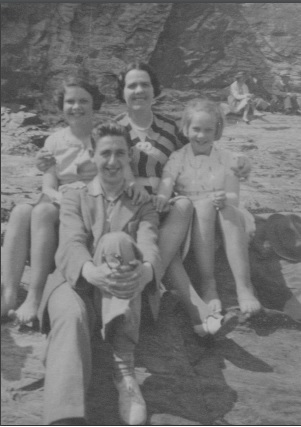 Swansea was bombed many times. 1st September 1940 was the biggest raid. Between this date and January 1941, there were sporadic raids. Friday, 17th January, Swansea received its first warning at 7.10pm, with the all clear sounded at 4.06am the following morning. Swansea which was covered in a blanket of snow was attacked by 88 aircraft over the course of 9 hours, 178 High Explosives and over 7,000 incendiary bombs were dropped. St. Thomas, Hafod and Bonymaen were the worst affected areas with 97 people being injured and a further 55 deaths.

The youngest to be killed was 13-month-old Frances Pearce, and the eldest 71 year old Daniel Lodwig. All those civilians that were killed are commemorated in registers kept at St. George’s Chapel, Westminster Abbey.

After I posted the photograph of Leslie Lewis’ gravestone on Face Book, I had a response from Paul Lewis, a family member, who furnished me with further information on that fateful night.

17th January 1941, Frederick, Leslie’s father who was a fire warden, was out on patrol and his mother Maggie, was comforting an elderly neighbour, when the house took a direct hit. Sadly, it took three days to recover Leslie’s body which had been blown up the chimney in the blast.

This year marks the 77th anniversary of the Swansea Blitz.

The Commonwealth War Grave Commission obtained names and details of civilian casualties from lists that were drawn up by the local councils at the time. So when researching, do take care with dates.

I contacted the Commonwealth War Grave Commission and informed them of the mistake on their website and they now have the correct information.

Want to know more about your family history?