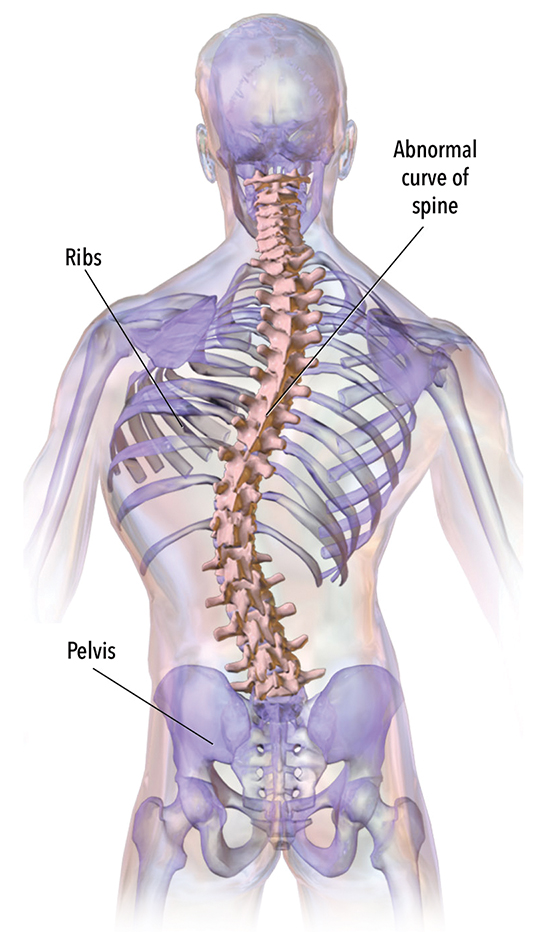 Skoliosis is a Greek word, meaning “bent” or “crooked”, with the word changed in English to describe torsional spinal deformities called scoliosis. Everybody is slightly asymmetrical. Our feet are slightly different sizes, one arm is slightly longer than the other etc. Our spines are relatively straight and vertical when viewed from the front or back, but our spines are curved when looked at from the side. The curves are called lordosis or kyphosis, depending on the orientation of the curve. The neck and lower back should be curved into a lordosis and the chest part of the spine (thoracic spine) should be shaped into a kyphosis. 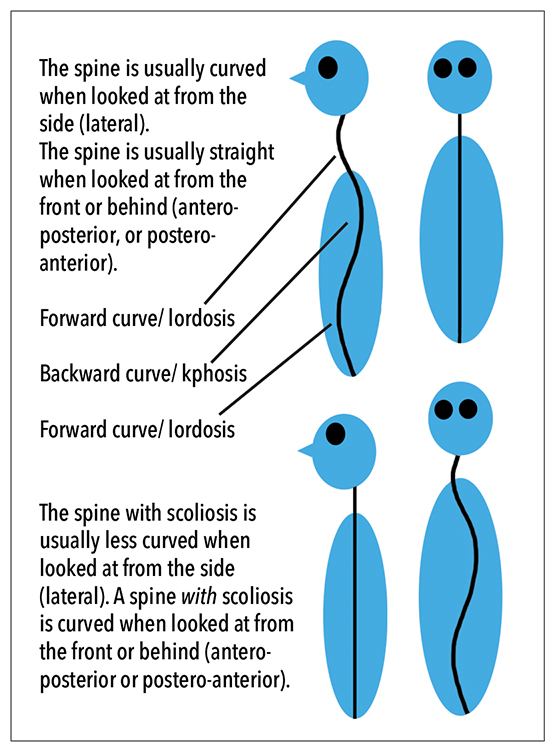 If we look at the scoliosis which is formed as the spine grows, the spine tends to adopt the following changes in the shapes of our bodies, as illustrated in the modified photograph taken from an NHS website below. We tend to see the change in shape more so by looking at our backs, although there are asymmetries on our fronts as well when we have a scoliosis. 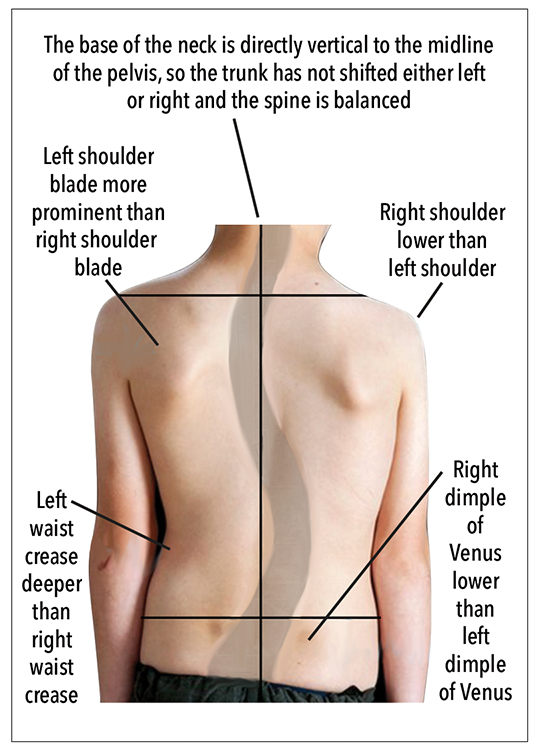 The photograph shows a teenaged boy standing upright, but his left shoulder is higher than the right shoulder. Not easy to see in this photo, but his left shoulder blade will be more prominent than the right shoulder blade because the spine has rotated anti-clockwise in the upper part of the spine. His waist crease is more prominent on the left and is relatively flattened on the right, with a more prominent right loin, since the spine has now rotated clockwise in the lower part of the spine. The pelvis isn’t quite level, since the two pits either side of the base of the spine (called “Dimples of Venus”, which tend to correspond to the top of the sacroiliac joints) aren’t lined up horizontally. This boy’s spine is ‘balanced’, in that his head is directly above the centre of his pelvis. If the head wasn’t directly above the pelvis, he would have ‘truncal shift’, meaning that the trunk has shifted lightly out of line with the pelvis. 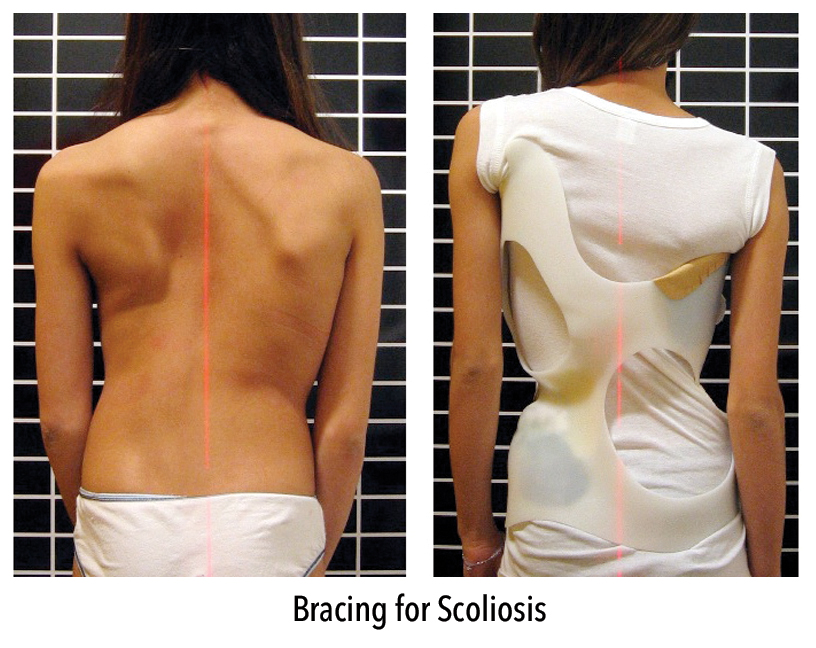 How a scoliosis is managed depends on how the scoliosis was caused in the first place. Most scolioses are found in older children and growth has a tendancy to emphasise the scoliosis. On the other hand, growth can be used to help guide the spine to grow in a less curved way, either by exercises, braces or surgery. The evidence behind exercises for scoliosis is patchy, but there are studies which suggest that smaller scoliosis curves can be helped by stretching exercises. The oldest treatments recorded from thousands of years ago illustrate people with scoliosis being stretched on racks to straighen out their curvatures. Hippocrates and Galen recorded traction methods between 150BC and 5AD. The art of bracing has also been around for a very long time, with bracing still practiced today. While bracing can stop and even reverse the scoliosis deformity, it entails wearing a body brace all day and night while the spine is growing i.e. a few years. Some people may say that the psychological impact of wearing a brace during the teenage years can be quite damaging. 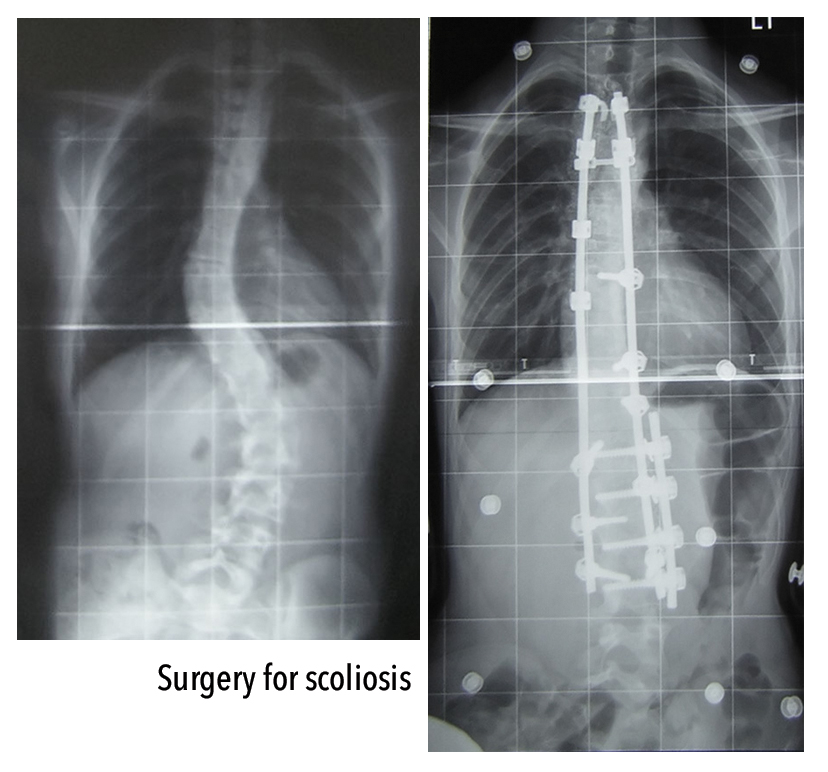 The prospect of surgery, however, is quite daunting, since it usually entails fusing together sections of the spine to stop them from moving. So, while the spinal deformity is corrected, the trade-off is the loss of spinal flexibility. The surgeon tries to fuse as little as possible in the spine for this reason.

While braces can be effective for smaller spinal deformities, they become debatable for bigger spinal deformity treatment. So, if you want to keep your options open for managing a scoliosis, the best time to diagnose the problem is as early as possible, when the defornity is relatively small and malleable. The easiest way to diagnose a scoliosis is to bend forward with your hands on your knees, as though playing leapfrog. The spine should look flat when looked at from behind, i.e. the spine isn’t rotated. This is called the Adam forward bend test. In the photo below, there is virtually no rotation, implying that there is no significant scoliosis for this person. 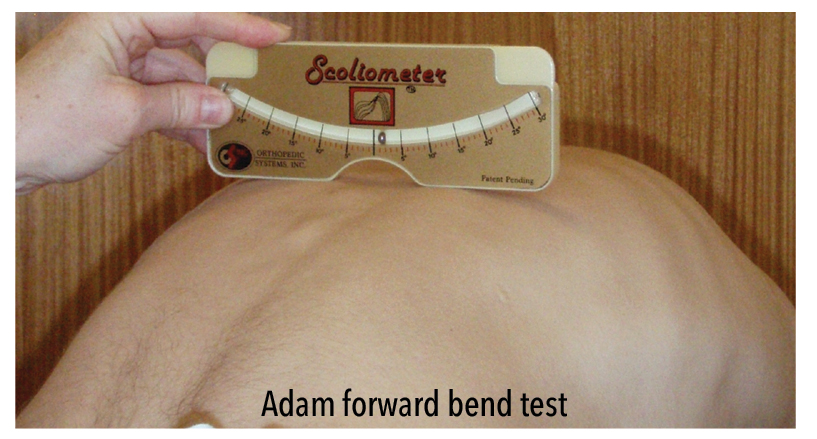 The gadget which looks a bit like a spirit level is called a Scoliometer, which is a type of inclinometer. It measures any angle up to 20 degrees off the horizontal, which is zero degrees as a reference. There are several digital scoliometers as Apps on smart phones, which cost less than a pound to buy and download.

If a scoliosis is left untreated, it probably will not alter the function of the spine or give any significant pain, either. Only a small number of people with scoliosis end up with noticeable spinal deformities, which can even affect the ability to breathe and affect the function of the heart. Very severe scoliosis spines are rare, but spinal scoliosis as a condition is relatively common. Most spines witih a scoliosis don’t require any treatment and can often get picked up incidentally during other investigations. Some people elect to have corrective spinal fusion surgery because the change in body shape is unacceptable to them. Having a spinal deformity can be distressing for some people, who find the asymmetry so upsetting that it affects their self-confidence. Spinal fusion surgery can have a postive psychological impact for some people, as well as reducing the risk of the scoliosis getting worse in the future.

Moving on to the degenerative scoliosis. This is a common condition which usually does not cause any specific problems in itself. It’s the result of the shock absorbers wearing out asymmetrically, which creates a scoliosis as the spine loses height. Sometimes, the scoliosis can trap nerves, causing sciatica symptoms. If the sciatica doesn’t get better by itself and surgery is considered, the surgery tends to be more complex due to the scoliosis.

In the future, hopefully we will be able to identify specific causes of scoliosis for each individual. We know that genetics contribute to the development of a scoliosis, but there are many different genes which can cause this spinal deformity. Unfortunately, it’s not as simple as testing for one genetic mutation. In 2016, a group of researchers found that they could create a scoliosis and also treat a scoliosis by manipulating certain genes in zebra fish. The gene that they manipulated in the zebra fish is also found in humans. It controls the development of microscopic hairs within the spinal canal where the spinal cord lives. If the hairs don’t develop properly, then a scoliosis develops, seemingly due to the flow of fluid around the spinal cord (CSF) being influenced by the genetic mutation.