Butterflies and moths are some of the most familiar insects, and they generally find themselves at opposite ends of the popularity scale, with moths usually being considered dull at best and jumper-eating at worst. As a result, there would not appear to be much hope for the over 1600 species of tiny British micro-moths of ever being regarded as worthy of closer attention.

But anyone who is prepared to take the plunge will be rewarded by an astonishing variety of elegant shapes, bright colours and intricate patterns, as well as fascinating and unusual habits. 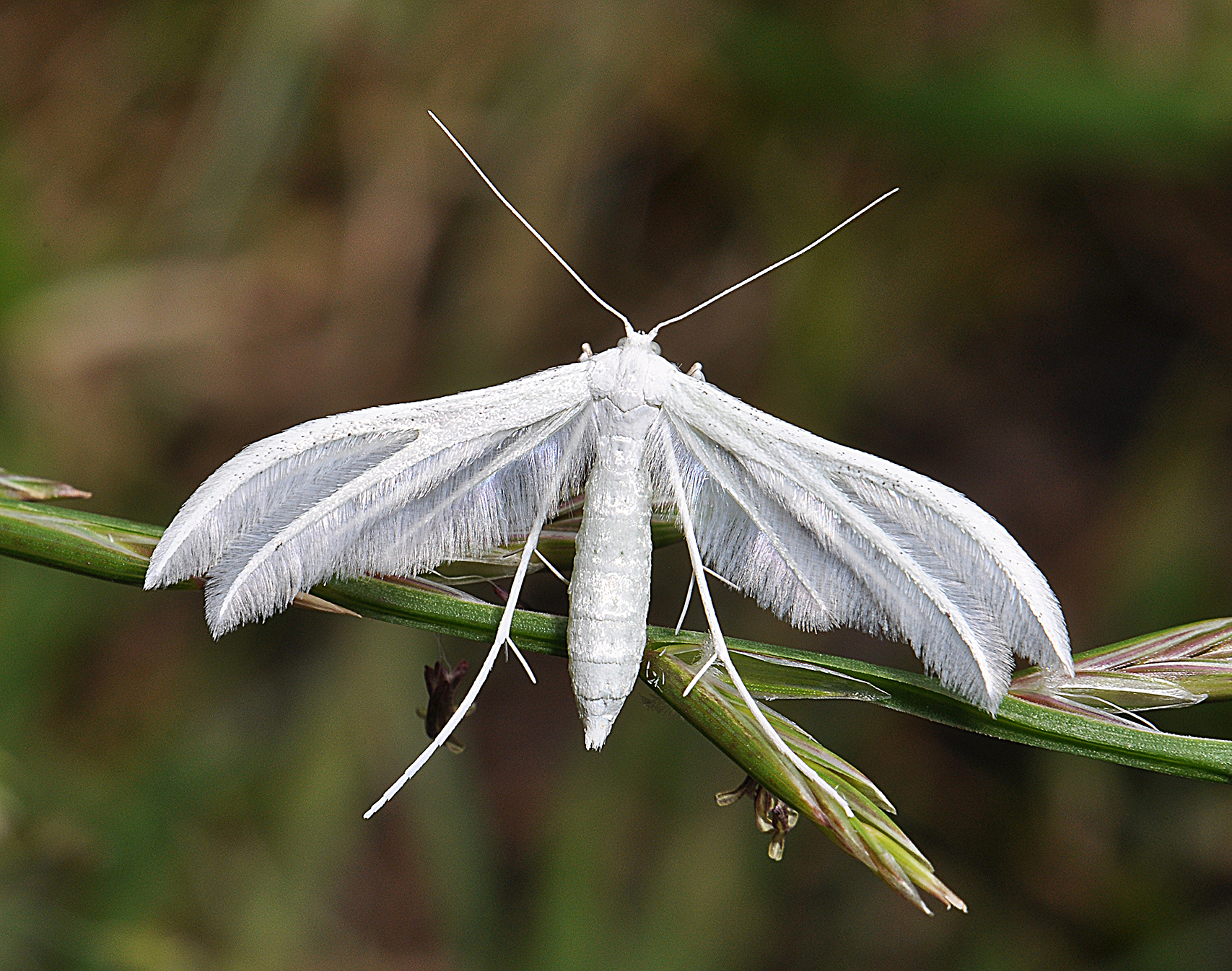 Of the nearly 2500 British moth species, around two thirds are considered micro-moths, which are generally smaller and evolutionarily more primitive than the 875 larger and more familiar species of macro-moths. Each British micro-moth species belongs to one of 45 different families. Some of these families have only a single representative in Britain, while the largest family, the Tortricidae or tortrix moths, has 399 British members.

The ghostly White Plume Moth (Pterophorus pentadactyla) (photo 1) is the most distinctive member of the most easily recognisable micro-moth family, the Pterophoridae or plume moths. All but two of the 44 British species of plume moths possess intricately divided, often feather-like, wings. Like the majority of micro-moths, the White Plume Moth is active during the night when it feeds on flowers such as valerian, but it is also regularly encountered during the day when its roost plant is disturbed and it makes its fluttering escape. The caterpillars of the White Plume Moth feed on bindweeds, perhaps a good excuse not to get too upset over the tenacious tendrils stubbornly persisting at the back of the border. 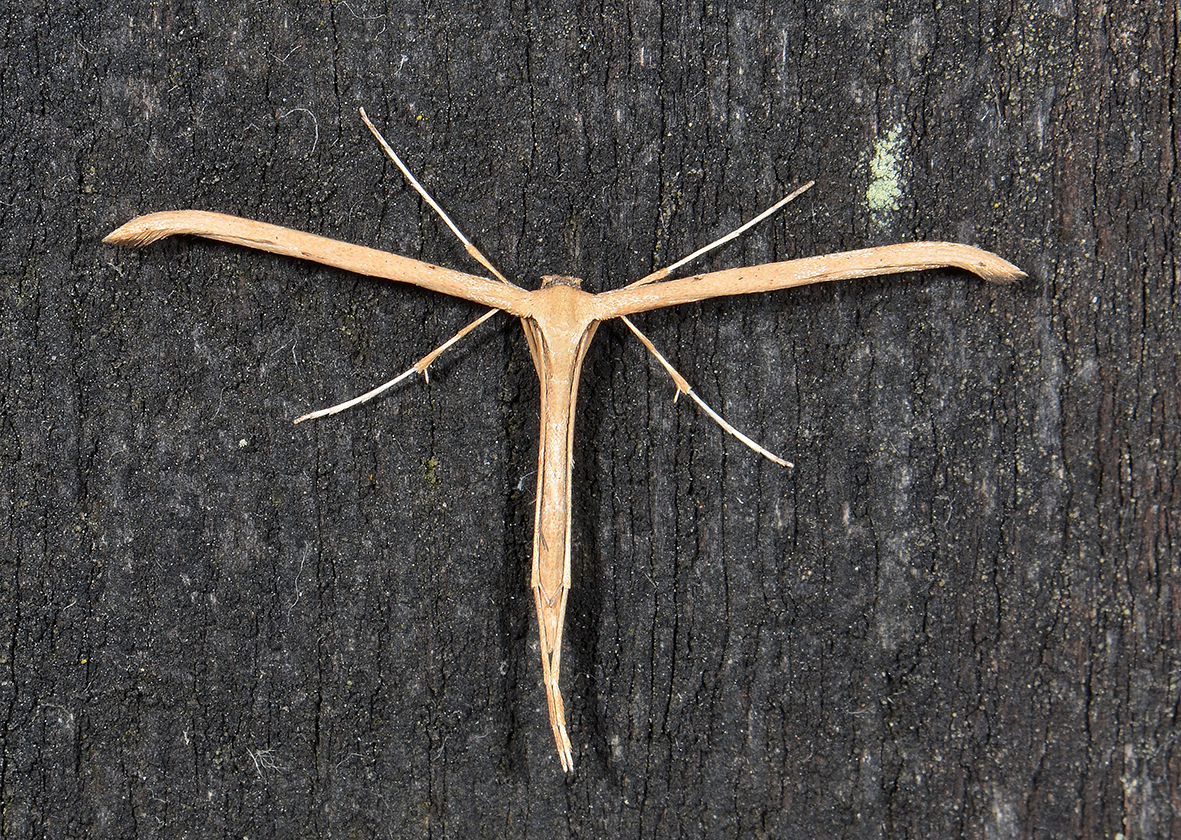 Most species of plume moths rest with their wings held stiffly away from the body at right angles, giving them a unique appearance. The frequently encountered Common Plume (Emmelina monodactyla) (photo 2), whose caterpillars also feed on bindweeds, displays this habit particularly well, because it tightly rolls up its wings when at rest.

By no means all micro-moths are slender or fragile-looking, and many micro-moth families have members that possess colours and patterns easily rivalling those of macro-moths and butterflies. 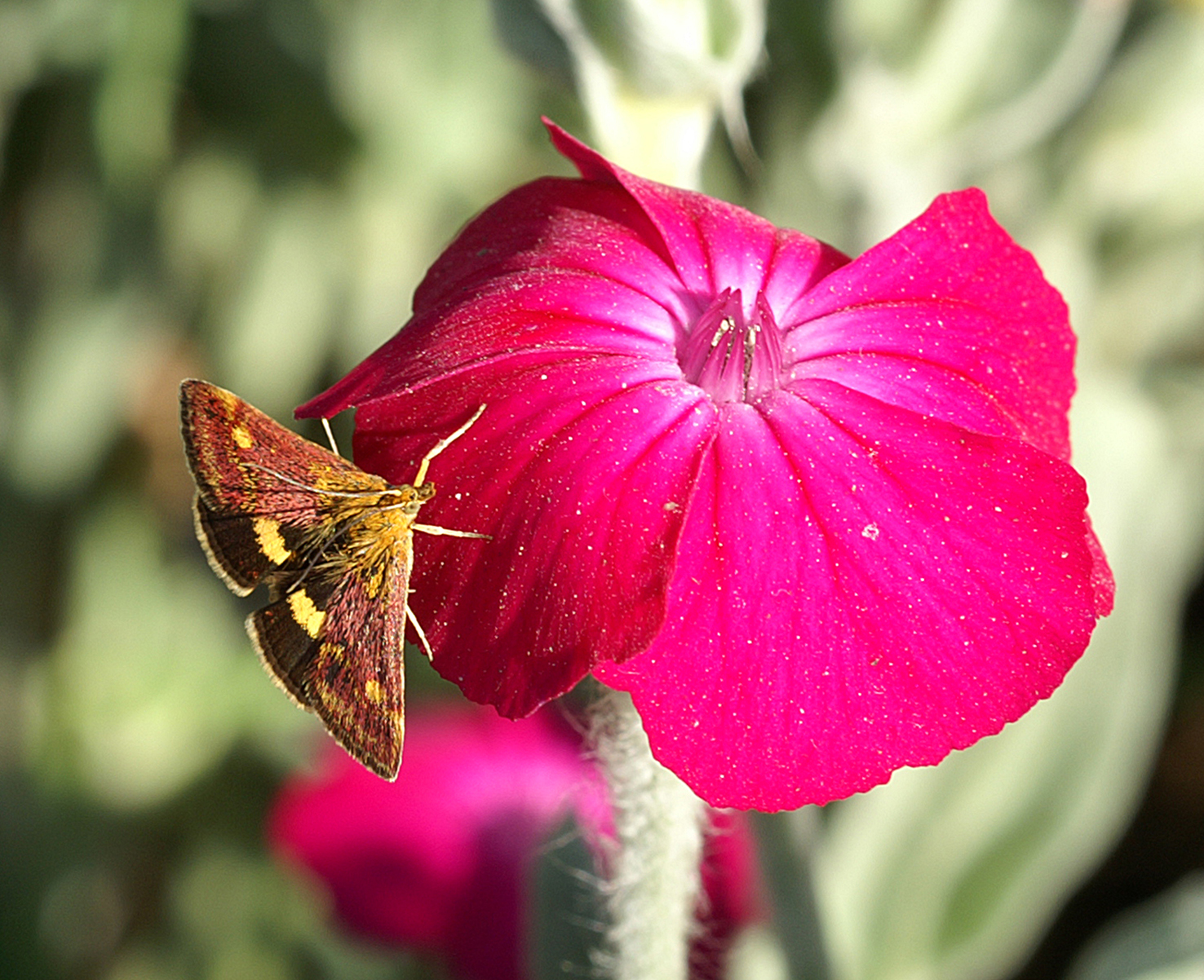 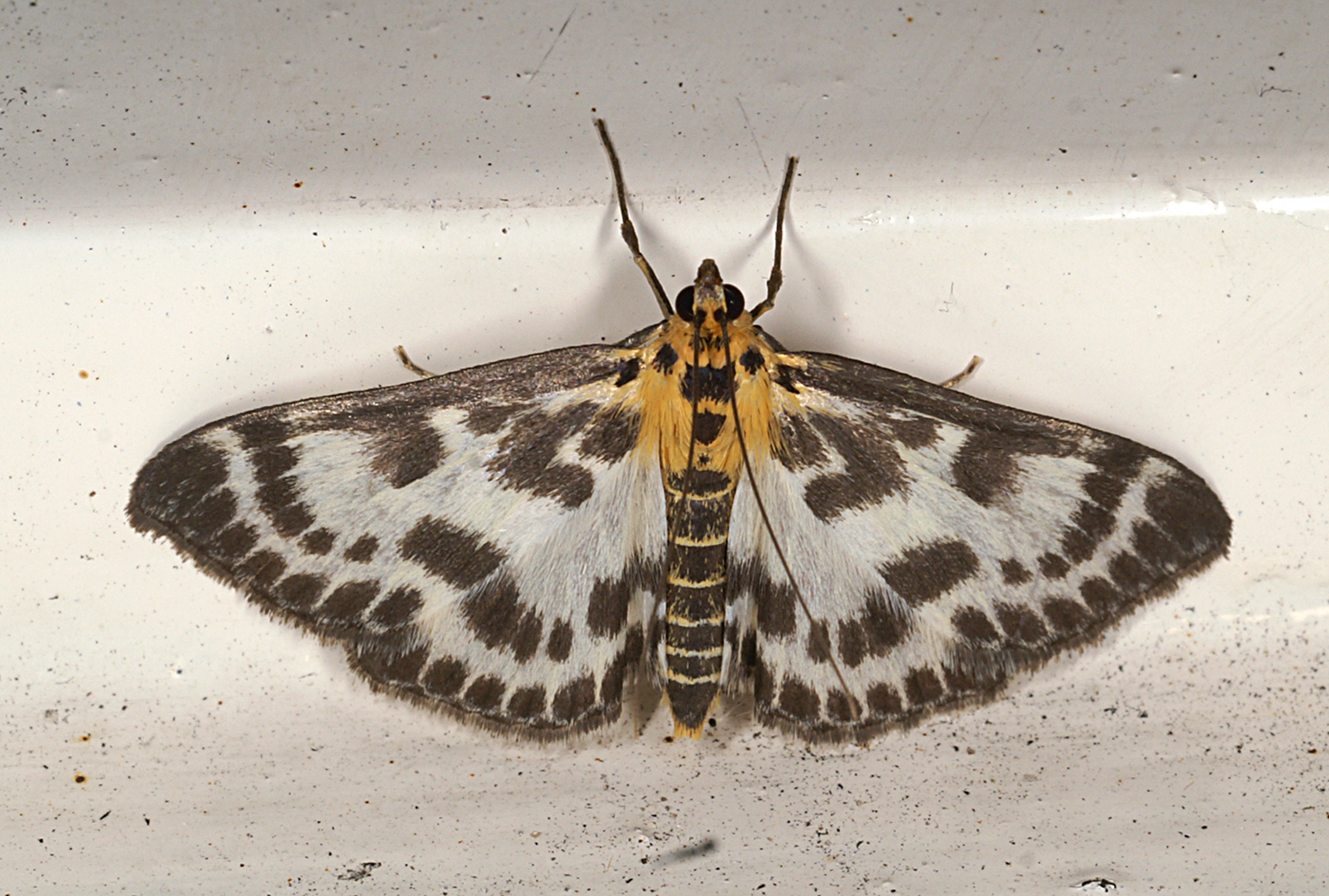 Several of the larger and most colourful species are found in the family Crambidae, 145 members of which occur in Britain. These include the day-flying Small Purple and Gold (Pyrausta aurata) (photo 3) and the Small Magpie (Anania hortulata) (photo 4). Both species occur in a wide range of habitats including gardens. The caterpillars of the Small Purple and Gold feed primarily on mints and marjoram, whereas those of the Small Magpie usually develop on stinging nettles. 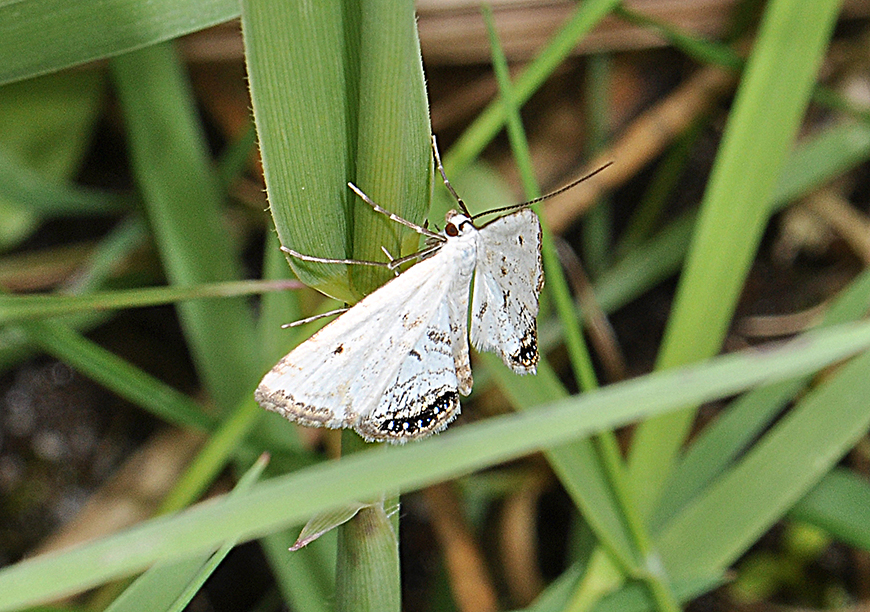 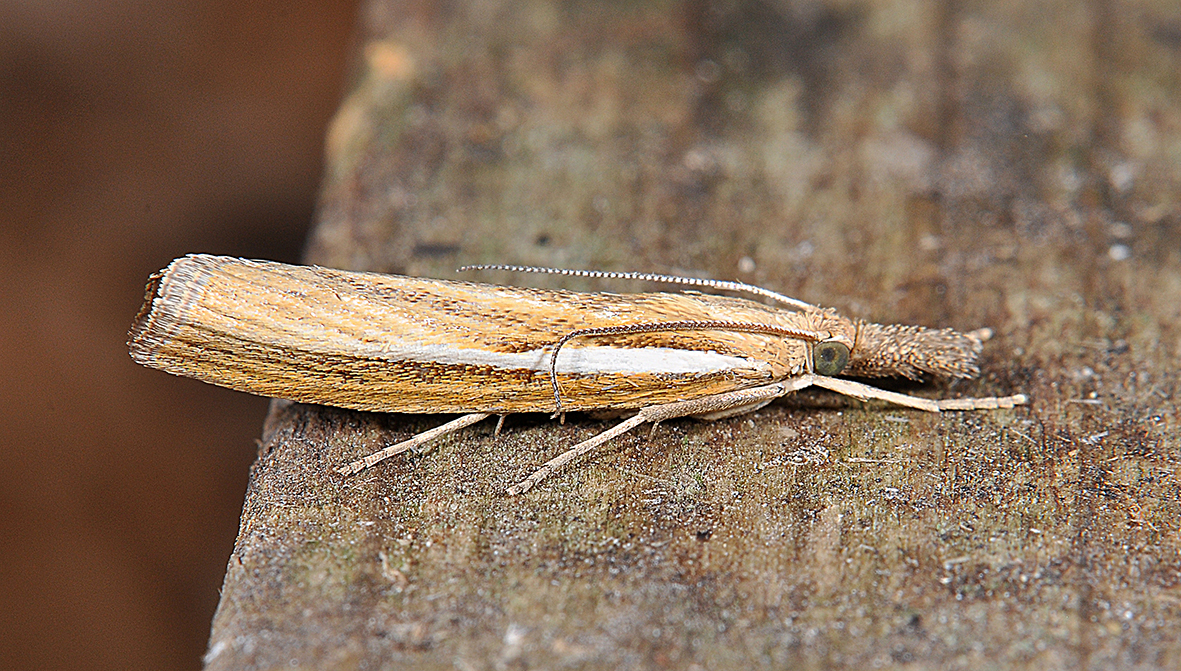 A number of species within the Crambidae, including the elegant Small China Mark (Cataclysta lemnata) (photo 5), are particularly unusual because their larvae develop underwater. In the case of the Small China Mark, the caterpillars feed on duckweed and live underneath the tiny plants floating on the surface of ponds and lakes. In order to disguise themselves, Small China Mark caterpillars fashion tube-like silken cases for themselves which they cover in duckweed (and sometimes other similar small fragments of vegetation), rendering them all but invisible.

The Crambidae is a very diverse family and not only contains some of the showiest species but also some true masters of disguise in the form of the grass moths. Most grass moths, including the Common Grass-veneer (Agriphila tristella) (photo 6), rest with their wings wrapped tightly around their bodies.

This habit, together with their muted colours and delicate patterning, makes for perfect camouflage as they rest among tall grasses during the summer, and it is not until one walks across a meadow and the startled moths take to the air that their often considerable numbers become obvious. The caterpillars of the Common Grass-veneer, like those of most grass moths, feed exclusively on grasses. 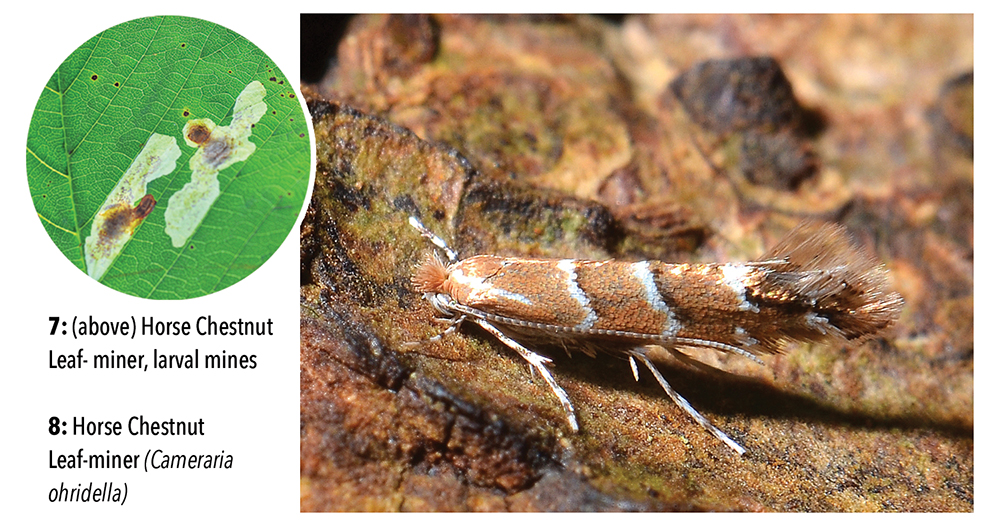 Even more rarely seen are the 95 minuscule members of the family Gracillariidae. They are so small that all of them start their development inside a leaf, producing a hollow ‘mine’ between the top and bottom surfaces of their leaf as they feed (photo 7). While the caterpillars of some species emerge from their mines as they grow, many spend their entire larval stage within their mines, and some even pupate there. In many cases, the type of mine combined with the plant species it is found on is enough to identify the micro-moth that inhabits it. Usually the activity of the Gracillariidae goes unnoticed by all but the most keen observers, but in recent years one species has been drawing attention to itself. The tiny (<10mm wing span) day-flying Horse Chestnut Leaf-miner (Cameraria ohridella) (photo 8), which was first recorded in Britain in 2002, has bred so well that it has already spread across most of England and Wales and has recently arrived in Scotland. It sometimes occurs in such numbers that by late summer its numerous mines cause horse chestnut leaves to appear brown and shrivelled. This effect may be so extensive that it can appear quite alarming, but – although unsightly – it causes no lasting damage to the trees. 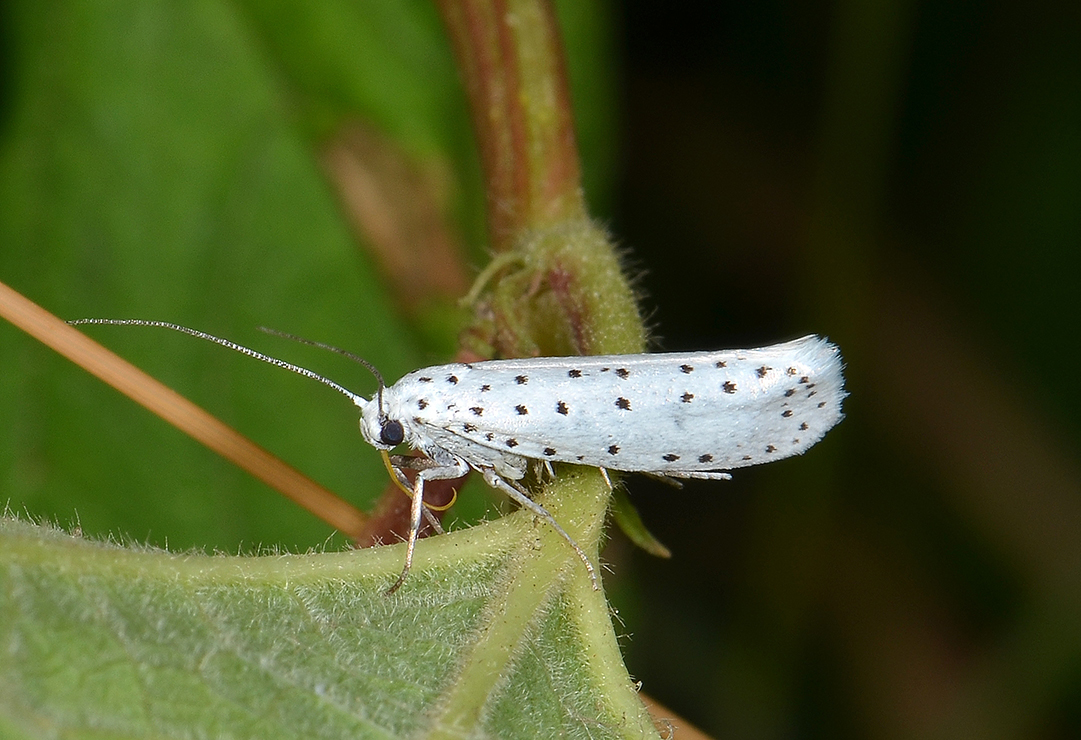 Small Ermine moths, such as the Spindle Ermine (Yponomeuta cagnagella) (photo 9), are also known for their ability to occasionally cause seemingly devastating damage to plants. The caterpillars of these distinctive members of the family Yponomeutidae (which has 25 British species) live in large groups in silken webs (photo 10), which protect them from predators as they feed. By early summer they may have consumed every last leaf on their food plant, covering it in a thick layer of webbing in the process (photo 11). At this stage it may appear as if the plant has been destroyed, but the caterpillars soon pupate, and within weeks the webs disappear and the plant starts to re-shoot. 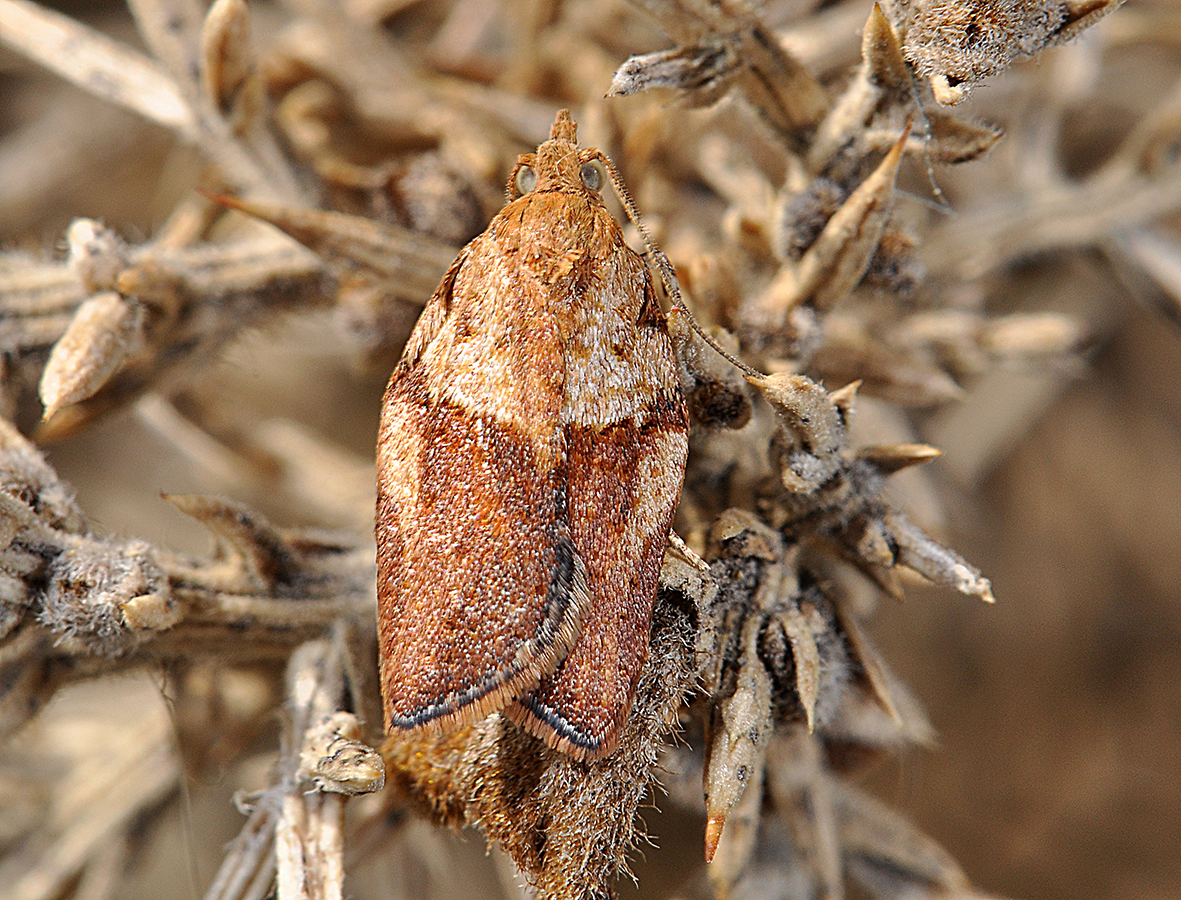 While Horse Chestnut Leaf-miners and Small Ermines do not permanently harm their food plants, there are several species of micro-moths which are, in fact, capable of causing economically significant damage. Most of these belong to the family Tortricidae, the tortrix moths, the largest and most diverse family of micro-moths in Britain. The caterpillars of many species of tortrix moths roll or fold up the leaves they are feeding on and secure them with silk to create a shelter. Some species develop within nuts of fruit, which provide even better protection for the larvae than rolled leaves. For the apple-dwelling Codling Moth (Cydia pomonella), this strategy can end in sudden disaster if its secure shelter is unexpectedly bitten into by a hungry human. The extremely well camouflaged Light Brown Apple Moth (Epiphyas postvittana) (photo 12), which has been spreading across Britain over the past several decades after being accidentally introduced from Australia, has proved to be particularly problematic because – despite its name – it is prepared to feed on a wide range of plants and can breed year-round if conditions are favourable. 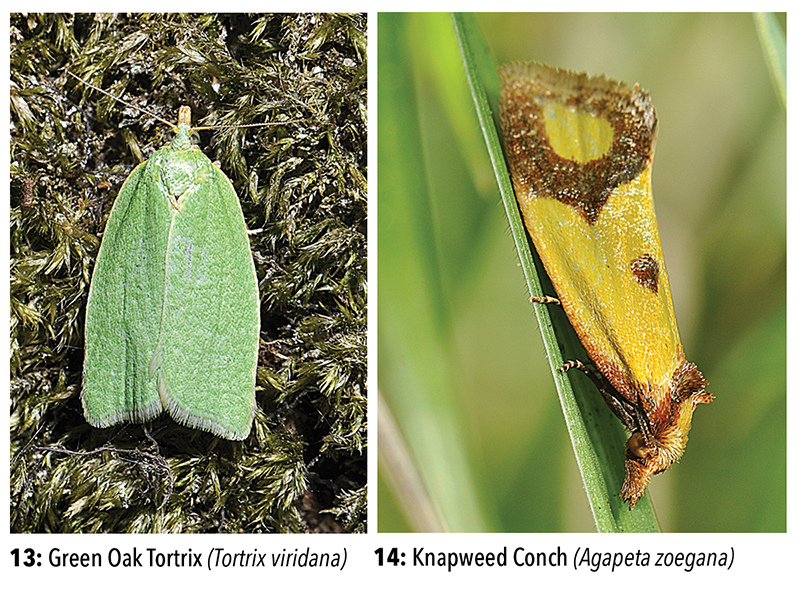 While there are potential pest species among them, the vast majority of tortrix moths never cause any problems, and most are well camouflaged and rarely seen unless searched for. A number of them, however, are very colourful, for example the Green Oak Tortrix (Tortrix viridana) (photo 13) and the distinctive Knapweed

The damage that micro-moths are probably best known (and most hated) for, namely producing holes in knitwear and depiling woollen carpets, is rooted in a terrible misunderstanding. While the larvae of most species of micro-moths develop on plant material, those of a select few are among nature’s most important recyclers of hair, feathers and other hard-to-digest animal remains. Without the incessant work of these caterpillars, thick fleeces and balls of fur and feathers would linger for years wherever an animal passed away. Animals often withdraw to their burrows or other secluded spots before they die, so in order to locate a suitable food source for their caterpillars, the female moths have to explore dark, confined spaces. To them, the wardrobe containing the expensive cashmere shawl closely resembles a den containing an animal pelt, and they get on with their business, unaware that the shawl was not yet ready to be reprocessed. Most recyclers of animal remains, including the familiar Common Clothes Moth (Tineola bisselliella), belong to the family Tineidae. But only some of the 63 species in this family feed on animal remains. Others develop on ferns, fungi or miscellaneous organic matter including old birds’ nests. 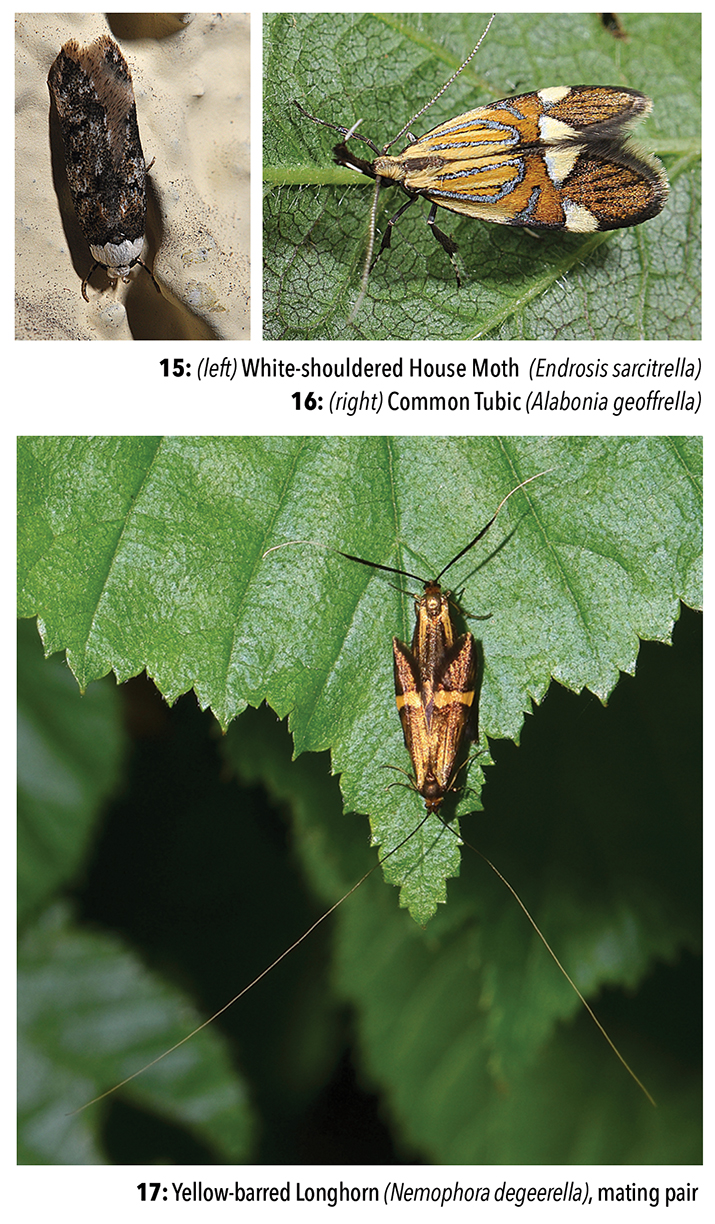 Some of the 27 members of the family Oecophoridae, such as the White-shouldered House Moth (Endrosis sarcitrella) (photo 15), also help to break down dead animal and plant matter. The White-shouldered House Moth is one of the many micro-moth species that beautifully mimic bird droppings (including the white urate fraction on the end of the dropping) to make themselves unattractive to predators. Some members of the Oecophoridae are quite particular as to the type of decaying plant matter they prefer, with the caterpillars of the exquisitely patterned Common Tubic

Much remains to be discovered about micro-moths. For example, in some of the 15 British species of longhorns (family Adelidae), the food plant and habits of the early larval stages are not yet known. One of these species is the beautiful Yellow-barred Longhorn (Nemophora degeerella) (photo 17) which, like all long-horns, flies in sunshine and can sometimes be seen in quite some numbers in suitable wood-land habitat. Male longhorns have particularly long and elegant antennae, which can be up to four times as long as their wings. 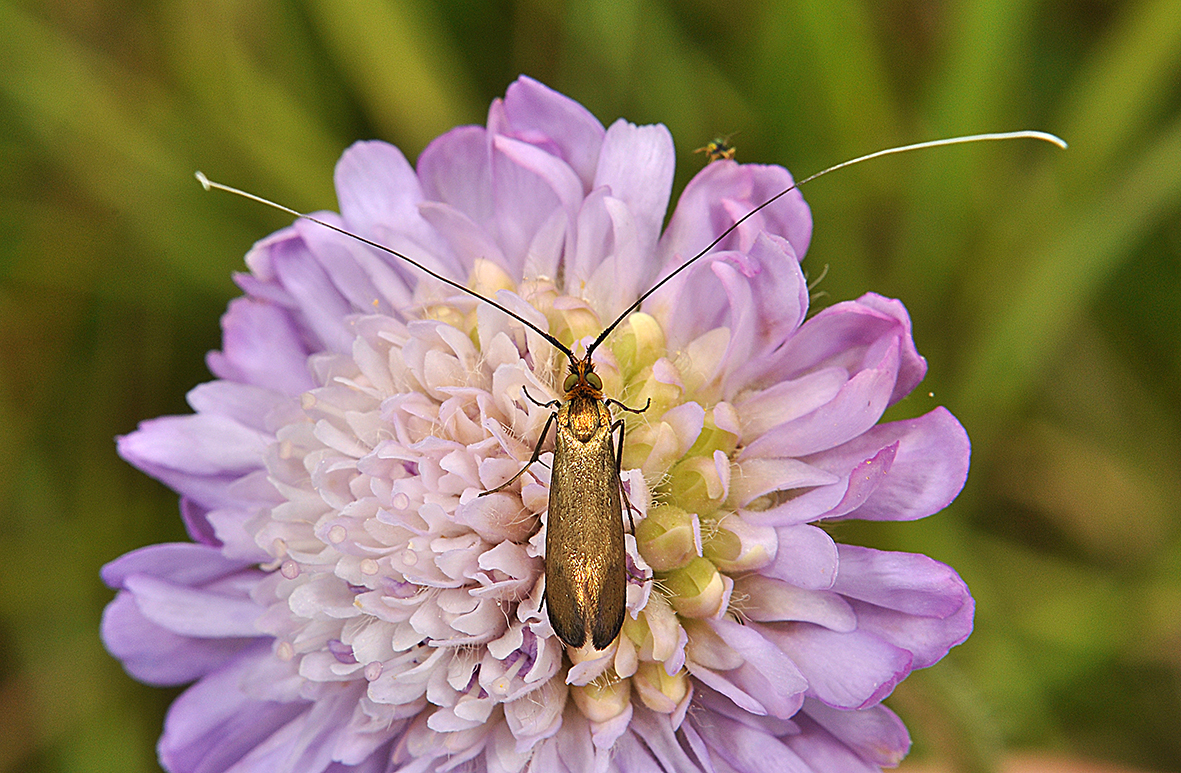 Micro-moths used to be difficult to identify and record until, in 2012, the first ever comprehensive and beautifully illustrated field guide to British micro-moths was published. As a result of this, as well as recent improvements in macro photography, micro-moths are becoming more popular and widely studied. Hopefully, soon, when admiring such beautiful sights as a Brassy Longhorn (Nemophora metallica) resting on scabious (its larval food plant) (photo 18), many more observers will be able to put a name to a face!

All photographs courtesy of Paul D. Brook His latest best-seller A comprehensive guide to Insects of Britain & Ireland (Pisces 2015) covers more than 2100 species and is available from: www.naturebureau.co.uk/bookshop Tel: 01635 550380