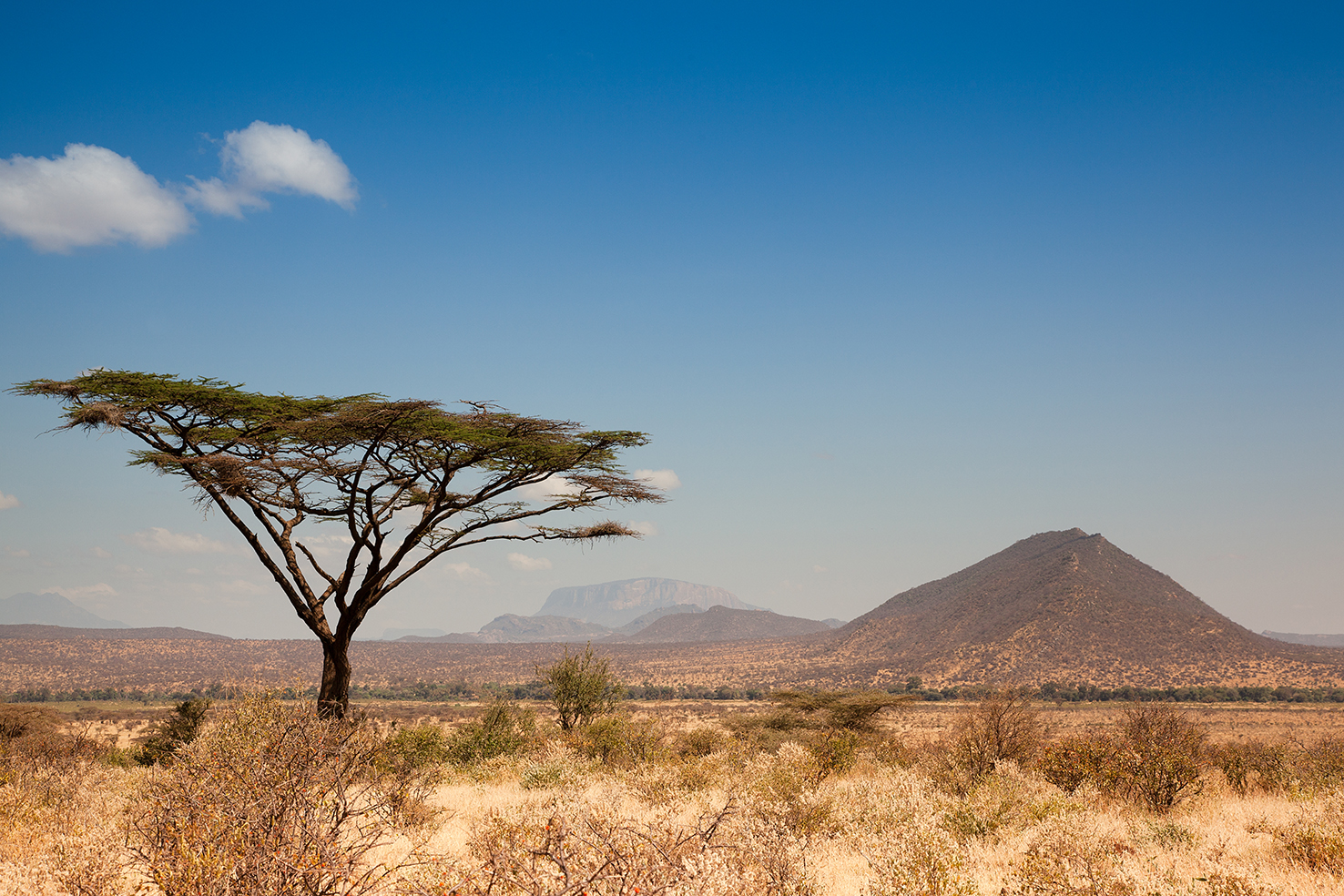 The Samburu Plain in central Kenya is home to volcanic pyramids and the occasional flat top acacia tree. In the background, the 2,000m Mount Ololokwe is one of the great mountains of Kenya and sacred to the Samburu people

Despite being overshadowed in recent decades by the popularity of trendier and more far-flung destinations, Kenya remains one of the classic traditional African experiences. Home to breathtaking landscapes and magnificent wildlife, it is so much more than just a ‘tick box’ adventure. Kenya is where you can really get a feel for what equatorial Africa is like. And if you’re prepared to go off the beaten track, you will find yourself in one of the planet’s great wildernesses.

My suspicion that not everything was going quite to plan started to take root when a cow overtook my taxi on the gridlocked motorway from Jomo Kenyatta International Airport to the domestic terminal at Wilson a few miles away. In theory I had a few hours to make the transfer after an overnight flight to Nairobi. But by the time I’d bought my ‘on arrival’ entry visa to Kenya (US dollars cash, exact money only, no change given), picked up my bag from the carousel and met my driver, time was rapidly becoming a commodity in which I was depressingly short. My anxiety must have shown because, as Solomon inched his battered yellow Mercedes forward in first gear, he gave me a reassuring grin with the words, ‘hakuna matata, daddy. The plane won’t go without you. I know the guy at the airport. He’s the cousin of my brother-in-law’s friend.’ 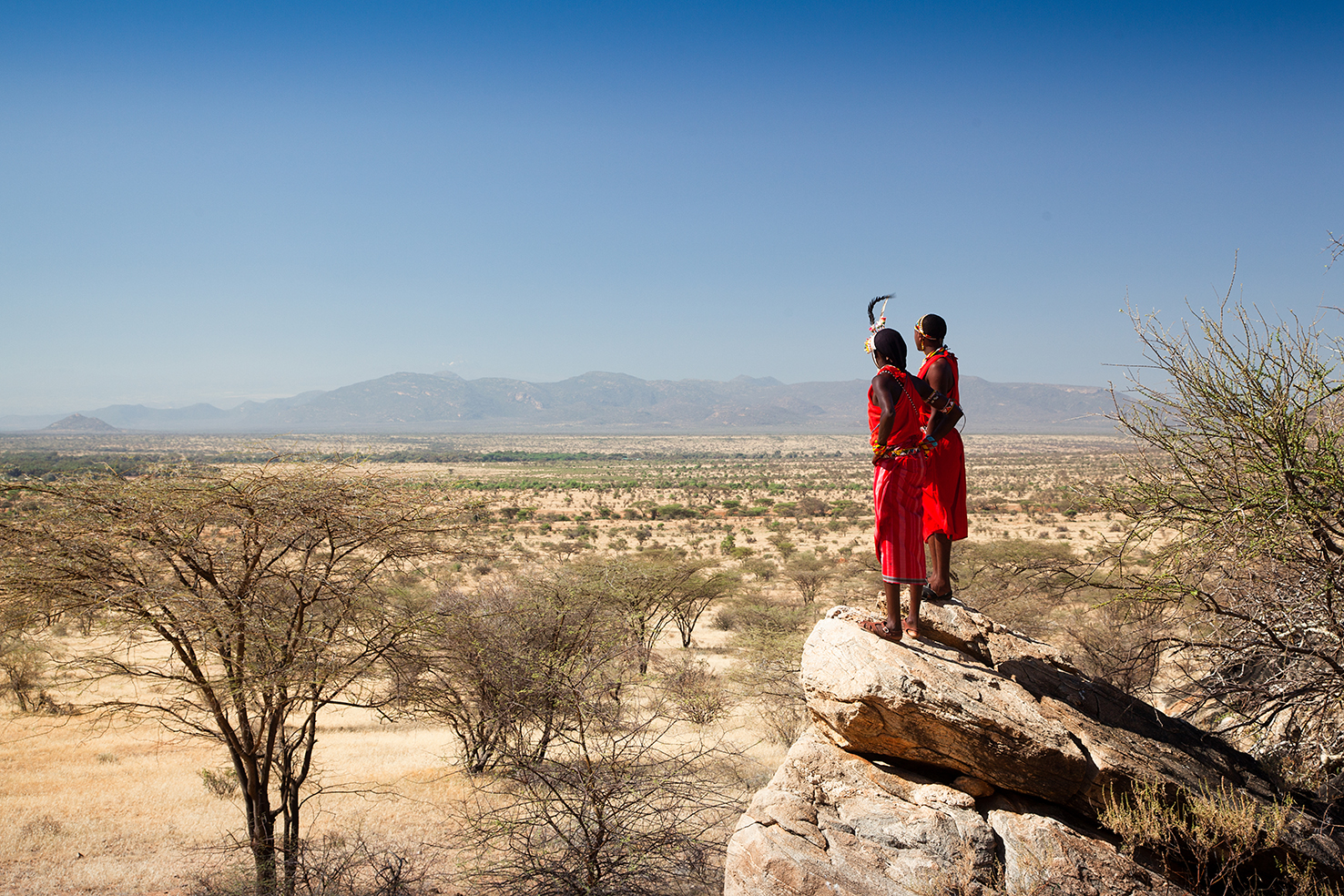 Samburu guides in traditional warrior dress, including the distinctive red kikoi (a type of sarong) as well as beaded necklaces, bracelets and headdresses

I’ve spent enough time in Kenya and Tanzania over the years to have picked up sufficient Swahili to know that ‘hakuna matata’ means ‘no worries’, which seemed a bit optimistic as another cow ambled past the yellow Mercedes. Although basic, my Swahili also stretches to understanding that his half of a loud mobile phone conversation translated as ‘passenger Smith is delayed. Don’t take off without him.’ To say that I was doubtful about all this was an understatement. But I’d forgotten about ‘Africa time’, a phenomenon in which the hands on the clock are only suggestions and waiting for other people is the polite thing to do. A few hours later I was in a Cessna ‘Caravan’ 9-seater light aircraft heading for the wilds of the Samburu National Reserve in up-country Kenya where, for the record, I was on assignment for the Daily Telegraph newspaper. 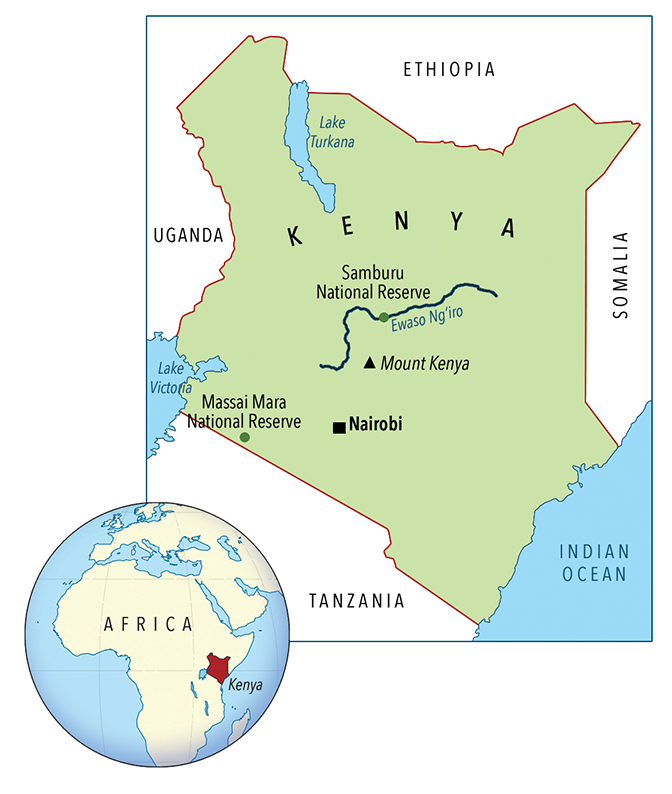 had been to Kenya a couple of times before and I have been there a few times since. But this for me will always be the special trip during which I felt that I got to know the place a little. Getting off the tourism beaten track of the much-visited Maasai Mara was something to get excited about. Don’t get me wrong, these southern plains that are teeming with wildlife are among the greatest of African travel experiences, but because of their over-exposure on television wildlife programmes by the likes of David Attenborough, the wild open spaces of the Mara are also teeming with people. Lots of people. So many that you sometimes get the feeling that it is the bewildered animals that come out of their hiding places to gawp at the hoards of crazy wazungu with their cameras, sunglasses and smartphones.

No, I was heading into the interior, where television has done much less damage; to the more serene and remote world of Born Free, a land where Joy and George Adamson hand-reared a lioness called Elsa and launched a worldwide wildlife conservation movement. In the Samburu National Reserve, I had been told, I’d have a much more authentic experience in which I’d see really ‘wild’ wildlife and meet real tribal people. These days the word ‘authentic’ is over-used in travel vocabulary’s orbit and I tend to wince whenever I hear it. But on the other hand, I thought, keep an open mind and let’s see what happens. As the Cessna made its descent onto a rough red earthen airstrip, grinding to its terrestrial halt in a cloud of dust, I started to think that authentic or not, there was adventure afoot. 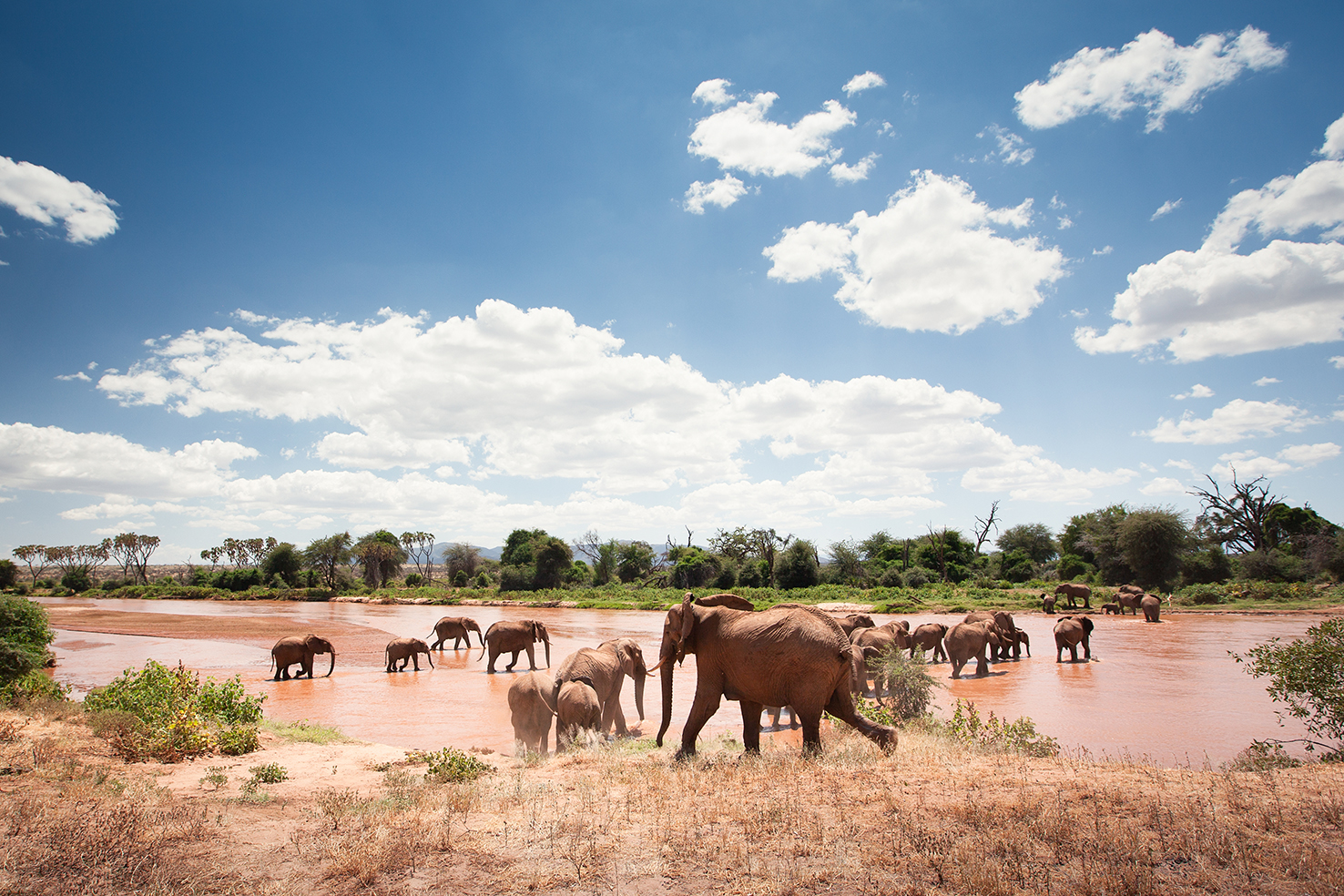 Herd of elephants crossing the Ewaso Ng’iro, or ‘brown river’, that rises at Mount Kenya and flows east into Somalia. The river is literally a lifeline in the arid plains of the region, attracting wildlife in huge quantities 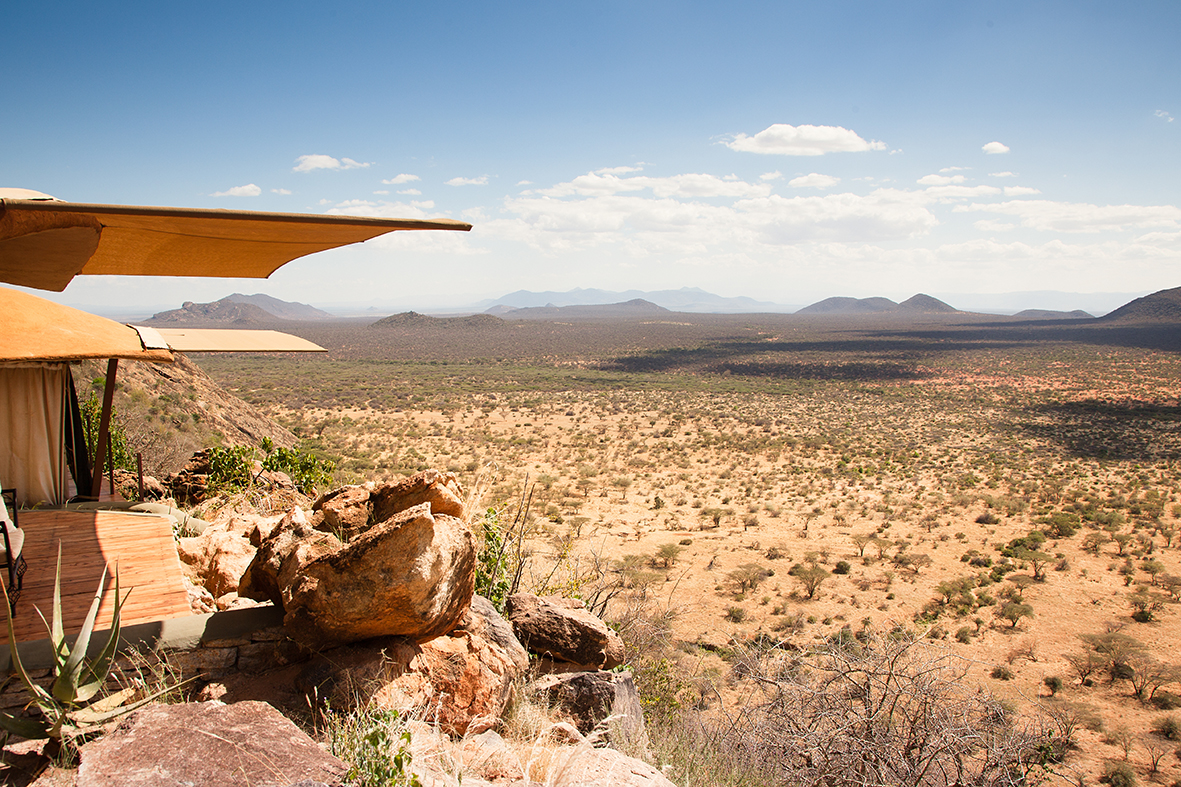 Looking south from my open-fronted villa at Saruni Samburu over the Kalama Conservancy. At night there is plenty of wildlife around and the harmless mongoose is common in the camp

My base for the first half of the visit was the Saruni Samburu Lodge, a camp high in the red rocks that overlook 200,000 acres of land that make up the Kalama Conservancy that I was about to explore. As we drove from the airstrip along the bush trails we came to the Ewaso Ng’iro river that not only lived up to its name – literally ‘brown river’ – but was also hosting a herd of more than fifty elephants that were as brown as the water they were crossing. I’ve been lucky enough to photograph elephants on dozens of occasions, but this was one of, if not, the best close-up encounters I’ve had. They were completely oblivious to the presence of us humans and carried on with their crossing as though nothing had happened. Later on in the trip, further north at Ol Malo, I had a slightly different encounter when a mother became very protective of her infant and warned us to clear off with a threatening posture that seemed rude to ignore. 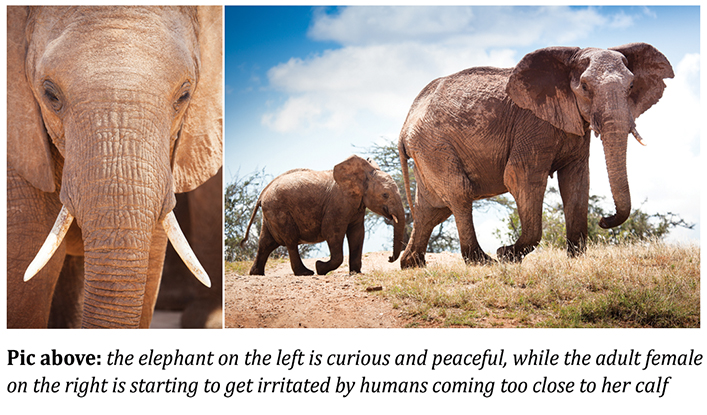 Watching elephants is a good thing, but there was ground to cover before dark and we reluctantly pushed on to Saruni where we ate ‘safari style’ by torchlight, met our guides and planned our next few days’ excursions. What followed was an extraordinary series of game drives during which I photographed numerous antelope including waterbuck, impala, gerenuk and gemsbok. But the real pleasure on any safari is the birdlife: from buffalo weavers to great blue herons, marabou storks to Verreaux’s eagles, carmine bee-eaters to lilac-breasted rollers, and the magnificently

named superb starling, which with its metallic blue plumage flashing in the African sun is something rare and unforgettable. That is until you realise that in East Africa they’re as common as pigeons, and if you are moved to do so, you can photograph them in car parks and on rubbish dumps scavenging for food. 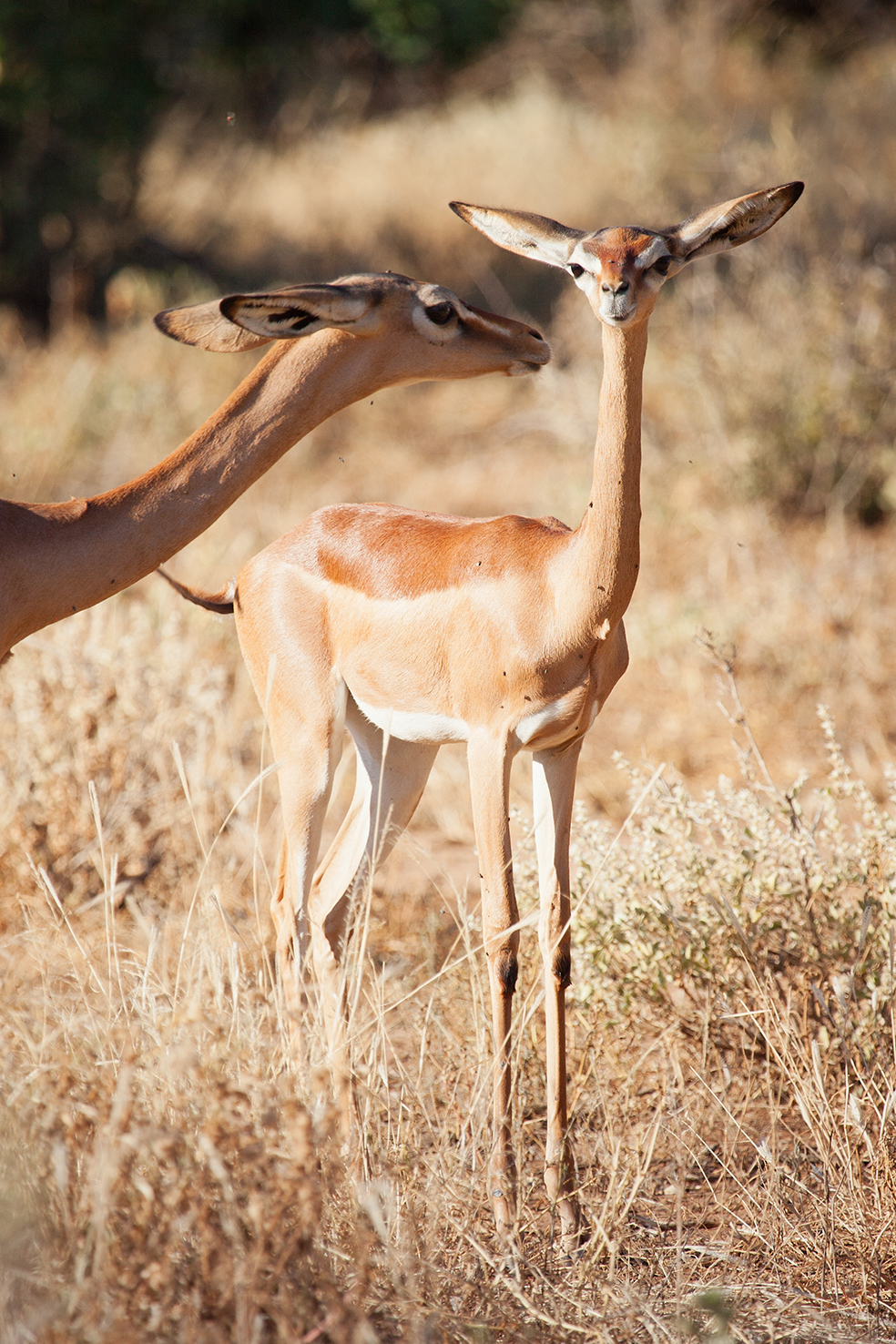 The distinctly strange looking gerenuk antelope that gets its name from the Somali word garanuug, meaning ‘giraffe neck’

After a few days it was time to head north to Ol Malo, a lodge perched high atop a volcanic kopje. I was collected from Saruni in an even smaller Cessna by Andrew Francombe, whose family has lived in Laikipia for generations. It

was a stroke of luck that Andrew appeared to be obsessed with flying and we spent what seemed like hours buzzing around, getting shots of camel trains crossing the river, the circular villages of remote tribal peoples and the great red landscapes that rolled into the distance with Mount Kenya to the east. On terra firma we cracked open a few bottles of Kilimanjaro beer as Andrew told me the history of the land and its people. We could go to meet them he said, and we did, spending an after-noon watching the famous jumping dances that are normally put on to separate tourists 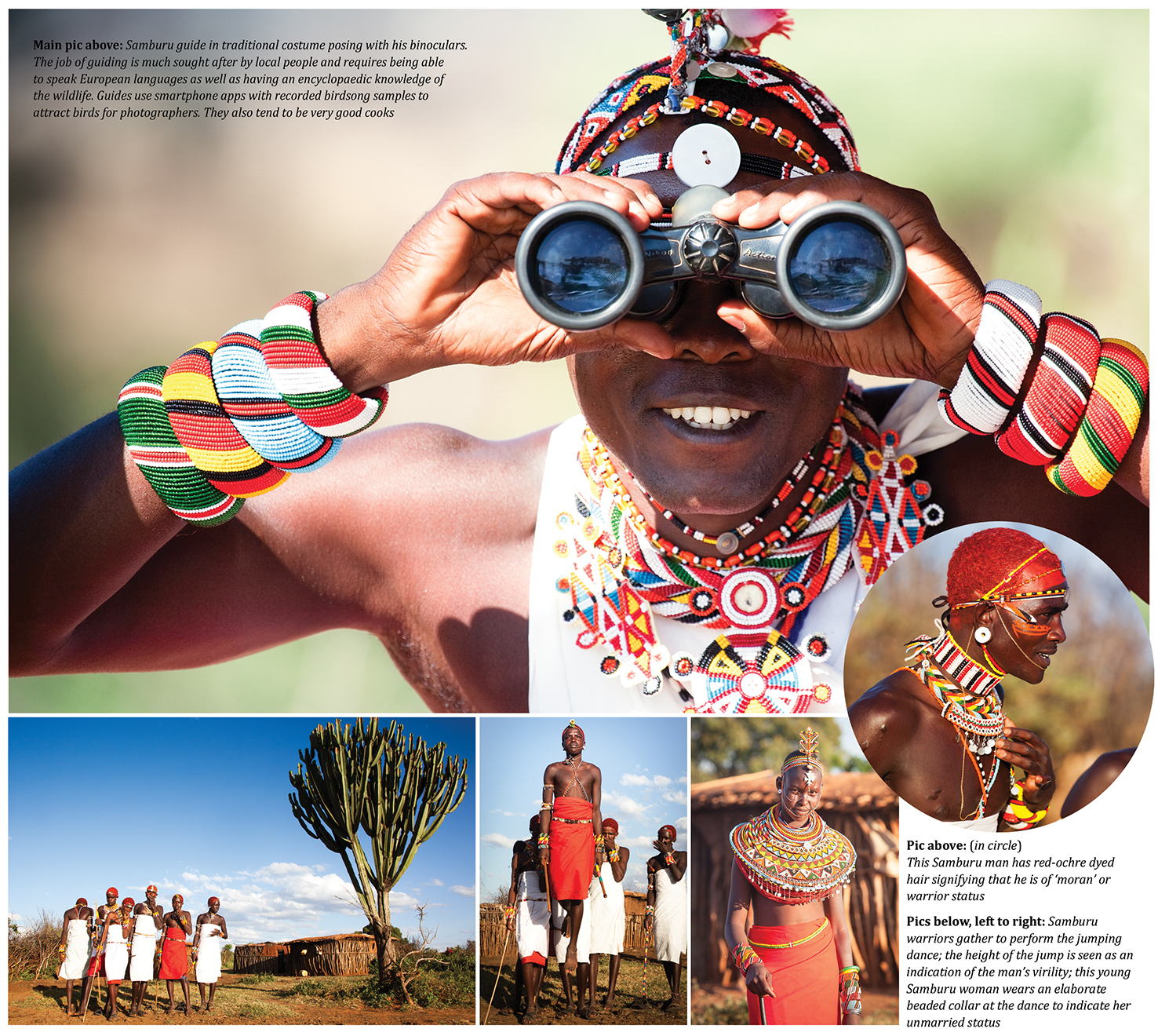 from their American dollars. But the dances we witnessed were ‘authentic’ – young warriors showing off their physical prowess to the unmarried women of the tribe – and we were lucky to be invited, and even luckier that they didn’t mind me photographing their teenage courtship rituals. By the end of the afternoon these warriors were crowding around my camera, keen to see pictures of themselves, as I realised yet again that a camera is a great way to make friends. They laughed at my Swahili, and I laughed at them when the young women got bored with their macho posturing and wandered off to do something more interesting. They pestered me for Marlboro cigarettes and when I told them that I didn’t have any, they got bored with me, and we all went home. 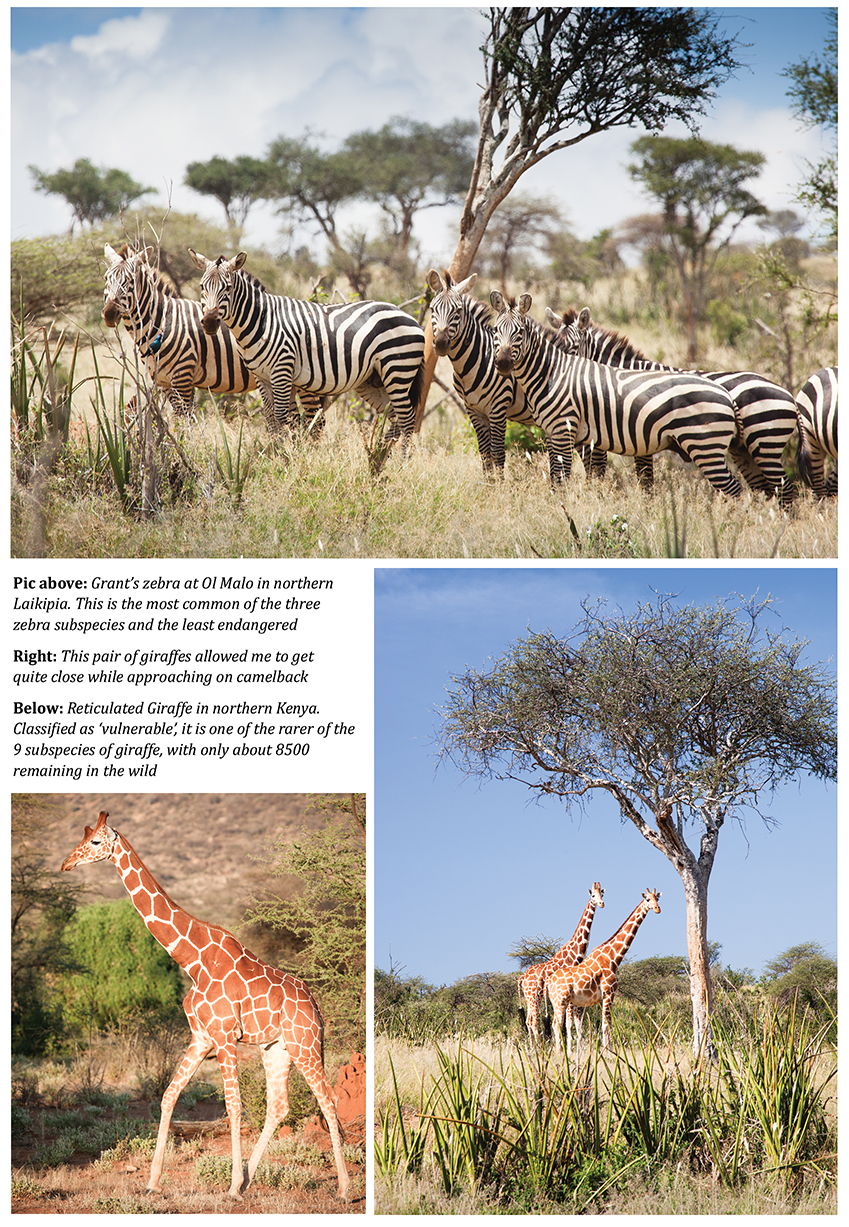 Before heading back to Nairobi there was one more thing to do. The camel safari. I’ve written before in the Bay about how much I dislike camels, but in the context of the African safari they have one major advantage, which is so important that it is worth any amount of discomfort. It may not seem much, but the simple fact is that neither giraffes nor zebras are at all spooked by them. Which means that if you are careful and quiet you can get much closer to the wildlife than you ever would in a Land Rover. You’ve got to follow the rules of course, but if you take your time you’ll get them nicely within range of your camera without having to use telephoto lenses (which, while being useful sometimes tend to compress the depth of field of a shot making the results appear very artificial.) With my ‘natural’ shots in the bag I felt like celebrating and, reasonably enough I thought, asked if there was any Kenyan coffee in our flasks. Nothing doing, said Colin (Andrew’s father) who then got one of the guides to draw milk off one of our camels into which he heaped a few teaspoons of Nescafé granules, whisked it all up and served it as a ‘bush cappucino.’ Warm, fresh milk straight out of a camel. While we drank it I photographed some King Baboon spiders that we fished out of their burrows by inserting long twigs which they then attacked. I’m pretty sure that the politically correct wildlife conservation people will frown on this distinctly school-boyish activity. But I can reassure them that no King Baboon spiders were hurt in the making of this article.

And so I said my goodbyes to the Francombe family and thanked them for my stay at Ol Malo. Andrew flew me to a regional airport nearby from where I caught a boring ‘normal’ aeroplane to Nairobi, only to find that I had pretty much all day to hang around until my flight back to Blighty. To add insult to injury, the motorway back to Jomo Kenyatta International Airport was virtually deserted and so with time to kill I talked Solomon into driving me to a giraffe orphanage where I fed some giraffes. This was followed by a quick spin around Karen Blixen’s house, once ‘in the foot of the Ngong Hills’, now in a suburban district called Karen, named after the author of Out of Africa. It was nice to go back to this old colonial coffee plantation that I’d not been to since the late 1990s, and I found it exactly as I left it. Nothing there is original: all the good stuff has been shipped back to Blixen’s native Denmark. What you see in the house is actually a collection of props rescued from the set of the movie of the book starring Meryl Streep. Not very authentic at all, I thought. But in the grand scheme of things, it hardly seemed to matter.