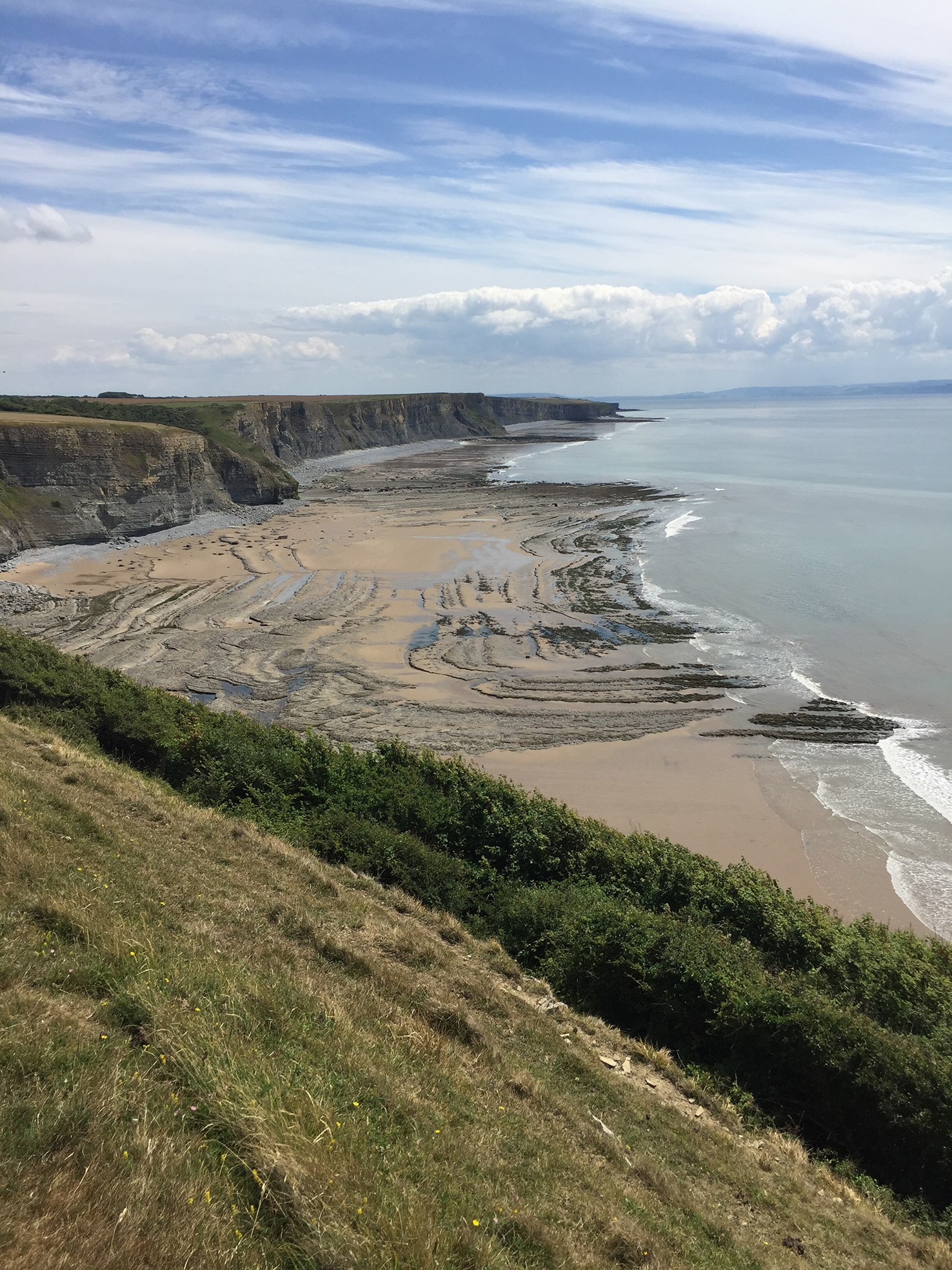 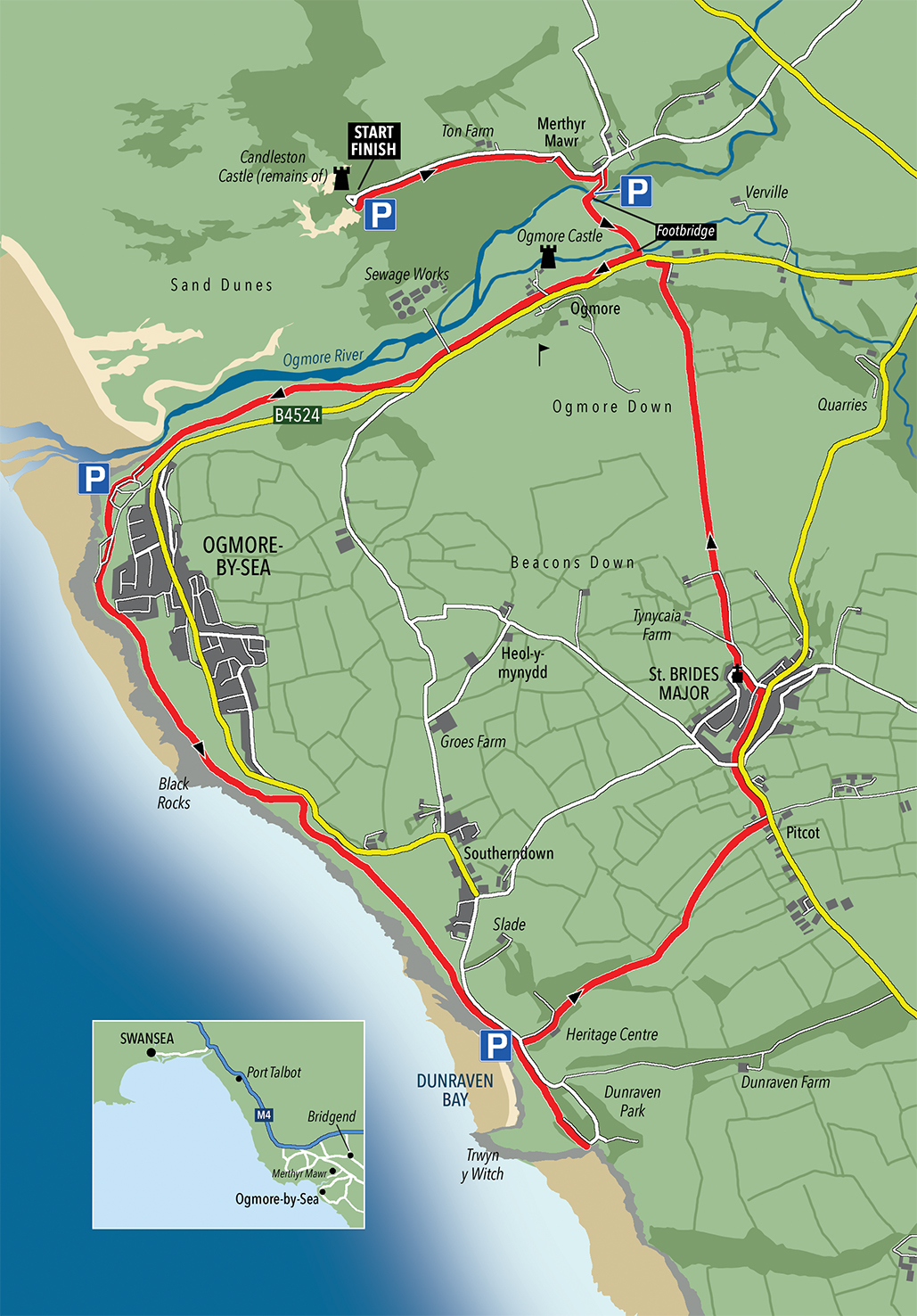 This month Ian takes us east towards OGMORE BY SEA and ST BRIDES MAJOR.

Only Ian could describe a walk of ten miles that includes Europe’s second largest sand dune a ‘stroll’, but at least he includes an interesting playlist

I had a very 21st century, middle class, Waitrose shopper type injury over the Christmas period when I accidentally stabbed myself in the finger while attempting to destone an avocado. I must admit, I might have had a couple of sherries so I wasn’t in complete control of the process, so it was of little surprise when I failed to get sufficient pur-chase on the slippery stone, succeeding only in diverting the tip of the weapon from stone to flesh. It was quite painful and it bled. And then it occurred to me what my late father would have made of all this; my father, the World War II veteran, retired steelworker, staunch working class and upwardly immobile. Pretty unimpressed, I’d imagine. ‘De-stoning a what?’ he’d ask incredulously. Apart from that, of course the incident itself would have been a pretty rare occurrence in a council house in Morriston in the 60s and 70s. Which then led me to think: What other com-monplace things do we hear today would have been completely alien to us back in the day ?

“Mam, I’m just popping out to meet Henry for brunch down the Bistro”

“Would you like some chia seeds on your Rice Krispies?

(This would make a cracking pub game)

No, things have moved on.

And what, I hear you say has all this got to do with this month’s walk? Well, absolutely nothing to be honest other than I had too much booze and time on my hands over Xmas, so it’s time to lace up those boots and get out there !

So where to go? I don’t know if I’m typical, but I nat-urally drift either towards Gower, or to the Beacons. Nothing wrong with that of course, they are arguably some of the best walking areas in Britain. However, there are other parts of our corner of the UK that are easily and commonly overlooked but are just as rewarding. So we’re heading east for a circular stroll starting and finishing in Merthyr Mawr via Ogmore-by-Sea and St Brides Major, taking in some pretty impressive sand dunes, stunning coastal scenery and a few castles. (it doesn’t sound so great when I read that back, but bear with me).

I like to build up the excitement on these walks by introducing the main attraction some miles in. You know, walking past some mildly interesting sights early doors, building up the tension and then, wham, the money shot! However, the major attraction on this walk happens to be right at the start. The huge sand dune known as the Big Dipper in Merthyr Mawr (see pics below). It’s an extraordinarily monstrous affair and kicks anything Gower has to offer firmly up the arse, which is nothing to be ashamed of as it’s the second highest sand dune in Europe.

It would, therefore, be irresponsible of you not to climb it at this juncture as you really don’t want to be doing it at the end of the walk. As you gradually ascend, gasping for breath and wondering whether chess would be a better pastime, it will come of no surprise to you that it’s been used as a valuable training location over the years by sportsmen and women including the Welsh Rugby Union team and Steve Ovett amongst others (Seb Coe sent his valet). 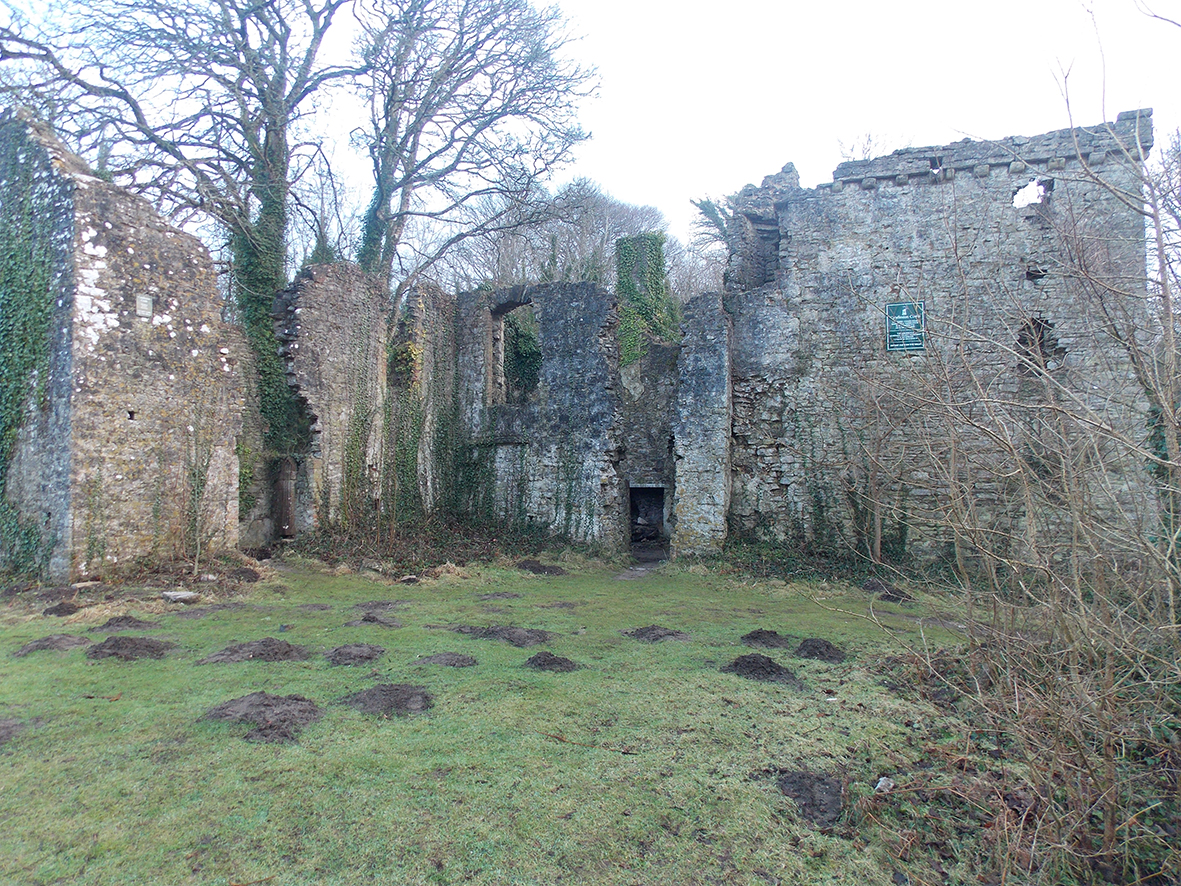 Descending the beast is no walk in the park either, a lot of pressure on the knees I find, so be careful. You’re no spring chicken anymore! Take time to see the remains of Candleston Castle in the trees (see pic right).

This forms part of the Merthyr Mawr National Nature Reserve which was part of a larger sand and dune complex that stretched from here to Gower, but now of course is punctuated by the results of man’s intervention, notably the Port Talbot Steel Works, the Sand-fields estate etc. The area was also famously used as a film location for Lawrence of Arabia, which is pretty cool.

The reserve is rich in rare wildlife and plant habitats and worth a mooch around on its own, but maybe on another day. Apparently, it’s well known as home to rare and unusual funghi. It gets busy here, so if you are coming, be sure to get here early because there might not be mushroom in the car park. Sorry. 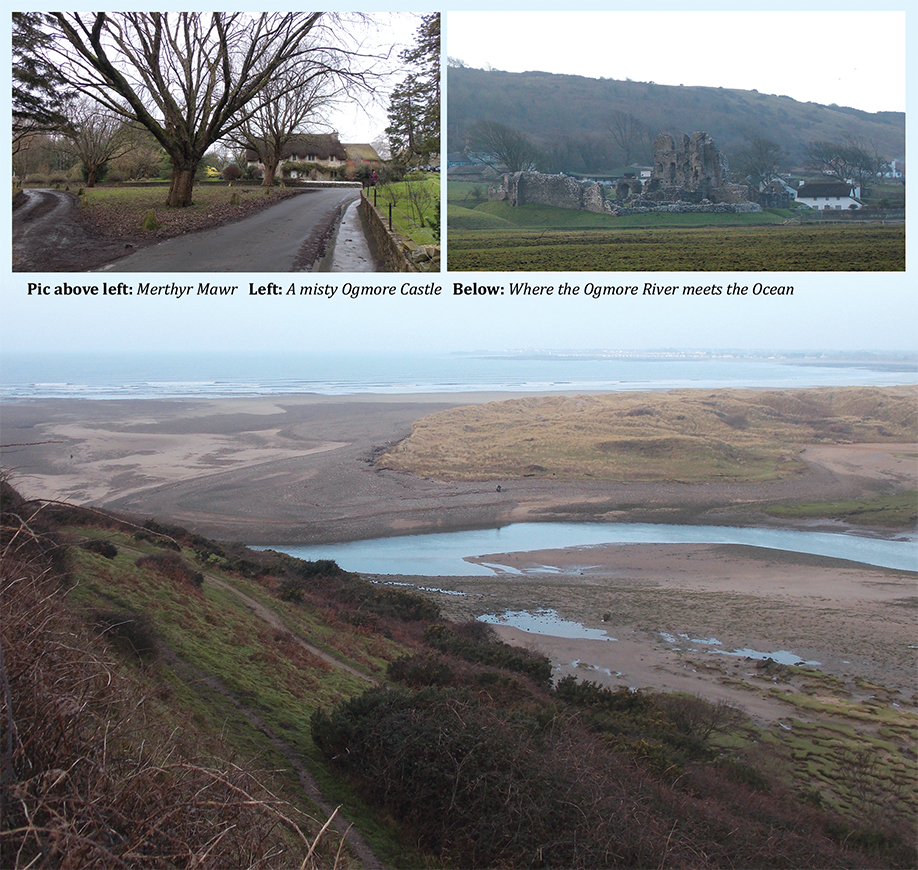 Ok, if you’ve survived climbing the dune, it’s time to start the walk proper. So you head back up to the village (pic above left) turning right at the small triangular roundabout (triangualabout?) and make for the white footbridge ahead at the bottom of the lane where there’s a car park. (Incidentally, the village itself is also very curious and incongruous to say the least. Its appearance is about as typically un-Welsh as you could possibly imagine with its thatched cottages and gently rolling farmland. It wouldn’t look out of place in the Cotswolds. It’s explained by the fact it originated as an estate village for the nearby Merthyr Mawr House in the 19th Century).

Now, if you wanted to be sneaky, and I’ll whisper this, you could actually start the walk from here. You could drive down to the Dipper, pay your respects, jump back in the car and leave it here by the bridge. Your shout. Anyway, you cross the bridge and once on the other side take an immediate left into a large field. Now, if you look at the map, there’s a more obvious path leading straight on from the bridge and to be fair it appears to be the shortest way to get to Ogmore Castle (pic above top right), which is on our route. However, if you do so, you’ll have to cross the river via some very dodgy stepping stones so I wouldn’t (and didn’t). There are a few stones missing, crucially in the middle of the river, and they’re also very slippery. To perfectly illustrate the point, the day I was there a lady was attempting the crossing, whilst leading her horse, but she slipped on the stones and ended up in the drink. Only up to her knees mind you, but still, the indignity eh?

There’s another hazard you need to be aware of – horses. I was with my dog and just as we crossed the bridge heading to check out the stepping-stone option, a horse inquisitively came up to meet us. He became increasingly agitated, probably in response to the presence of the hound, and frighteningly, he actually charged us (as in, ran towards us in a provocative and aggressive manner rather than asking for an entrance fee) and frankly I thought my days were up. However, it only seemed to be a warning shot because he pulled up just in time in front of us, his hooves sliding in the mud as he did so. A bit like in the cartoons. So like I said, don’t go this way!

Once in the field, you head for another footbridge on the other side which brings you out onto the main road where you turn right. This takes you into Ogmore-by-Sea and apart from a few sections of pavement, you can walk on raised grass verges and eventually on wide open burrows (pic above bottom pic).

Make your way to the beach car park taking in the view to the right of the mouth of the Ogmore River and over to Porthcawl in the near distance. Once in the car park head for the bottom far corner near the beach, go through the gate and onto the coast path which basically takes you to Dunraven Bay (pic below left) a few miles on. Enroute, you won’t see much in the way of sand but the ruggedness of the coast here is quite appealing.

After a few miles, you’ll eventually end up in a car park overlooking the bay which is a popular surfing location. Now, the route will eventually take us left here, past the Heritage Centre and over farmland and into St Brides Major. But what I would suggest you do is to make a brief detour, up over the head-land which will afford you stunning views of part of the Glamorgan Heritage Coastline. Being a blinkered believer that Gower is best, I have to admit that this stretch of coastline is pretty impressive by any standard. The erosional effect of the sea has created almost vertical cliffs exposing layers and layers of mudstones and limestones. It’s stunning, fair play. You get there by following the tarmac road after the lodge.

OK, so return to the bay and now you go right, past the Heritage Centre and into the woods. After a short while our path bears sharp left so ignore that path to your right, all the time following markers with a purple M. Through a kissing gate into a open field remembering to stay on the left. You enter the next field to the left but go immediate right into another and over a stile. You enter the next field and exit diagonally opposite and then you will eventually emerge onto a main road and the village of St Brides Major (pic above top right). 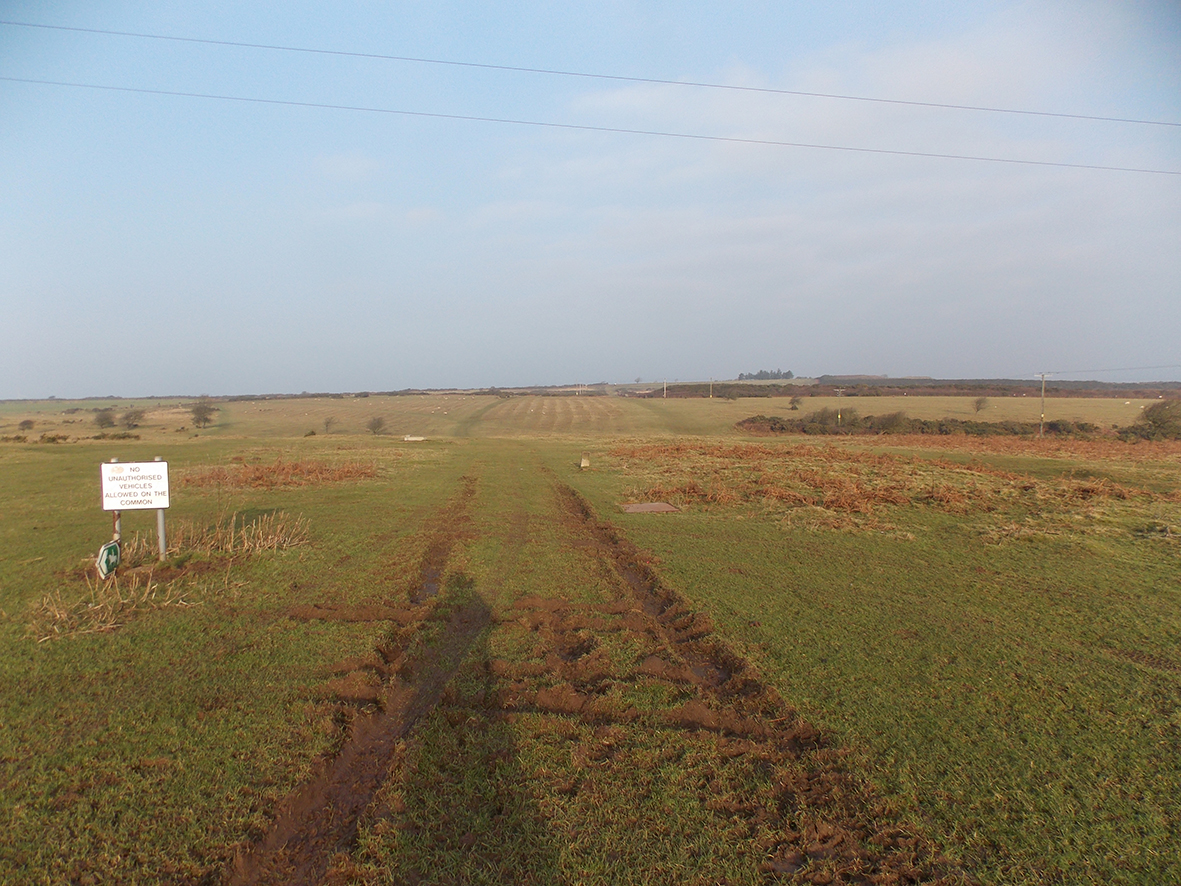 Go left towards the village and take a left just after the church (pic above lower right) up a road sign-posted The Shilly, continuing as it gently ascends until a common opens out in front of you with views over Bridgend and the valley below. You are now faced with a number of path options but yours is pretty much straight on, heading for a white box on the horizon (pic right).

Once you reach here you’ll then walk past the 15th tee on the Southerndown Golf Club (tricky drive into the wind I’d imagine) and you take the path ahead of you between the hedges. You are now descending and will emerge onto the main road just up a bit from the castle. Go left and look out for the stile by the bus shelter giving you access to the path which returns you to Merthyr Mawr.

So there you go, a really lovely walk and by the time you’ve finished you would have fully deserved a beer or two and maybe even treat yourself to a healthy poached egg on toast with avocado. Just don’t ask me to destone it for you.

Distance: Approx 10 miles – it took me about 4 hours to complete

Mudometer: 3.5 (subject to change depend-ing on amount of rain. Wasn’t too bad when

I did it after a few days of heavy rain)

Child friendly: Yes but it’s quite a long way

Cafes/Pubs: Spoilt for choice. Try the pub The Pelican in her Piety or Cobbles cafe

Theme from Lawrence of Arabia

Don’t Change Horses in the Middle of a Stream: Tower of Power

Madman Across the Water: Elton John

Show me the Way: Peter Frampton

Surf’s Up: The Beach Boys

Down by the Seaside: Led Zeppelin