Have you ever gone to a new place and got lost without a clue where you are going? I have! Whilst visiting London, I have wandered the streets not knowing where I am. Then I rummage in my pocket to find a copy of a map, and to discover that I was only a few roads away from my destination.

In this piece I am looking at Ordnance Survey, cartography and the cartographers who have produced these maps.

We must go back to 1791, when Britain fell seriously behind other European countries that had started their own mapping during the 1750s. It was Midsummer Day, 1791, when Ordnance Survey was established. The agency’s name indicates its original military pur-pose which was to map Scotland in the wake of the Jacobite rising of 1745. There was also a more general and nationwide need in light of the potential threat of invasion during the Napoleonic Wars.

The earliest survey of the country used the technique called Principal Triangulation of Great Britain, which was a high-precision trigonometric survey. Work was carried out by the Board of Ordnance, governmental department from 1791 and this process was still in use until 1853; with the first maps of Kent and part of Essex, known as The Mudge Map, having been produced during January 1801, in response to the feared invasion by the French. These beautiful maps, forming part of the 60,000 maps belonging to King George III can be found in the British Library, London. 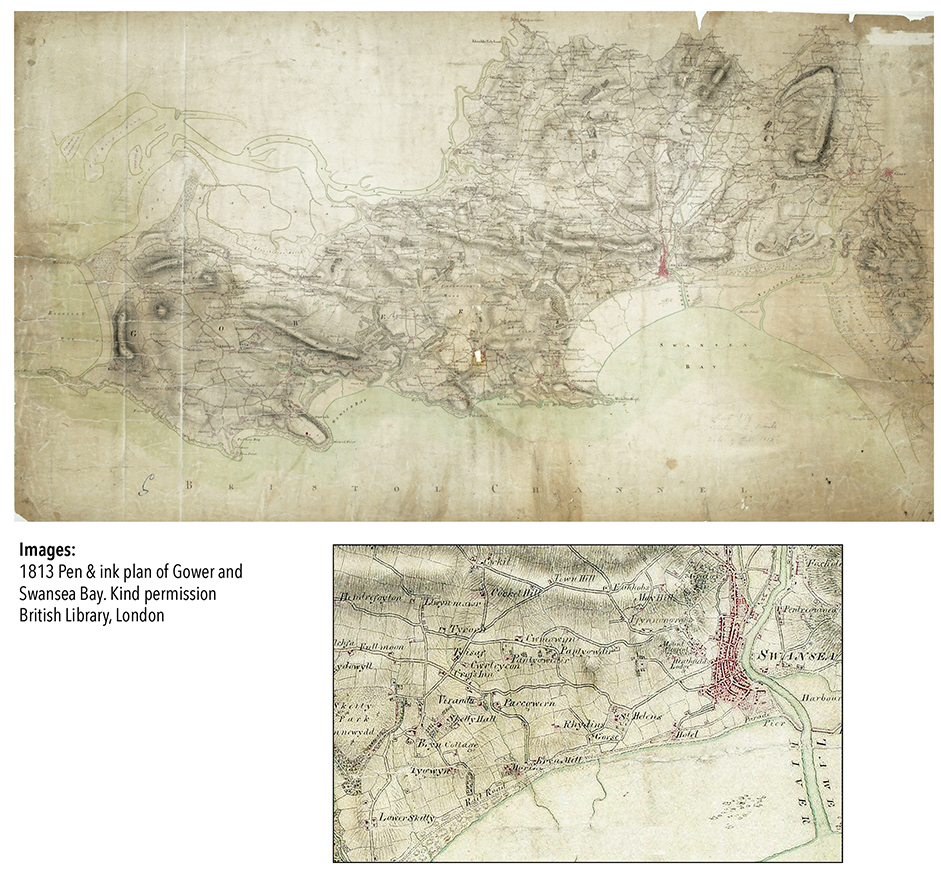 One of the first maps to be produced for Swansea was drawn during 1813 by the draughtsman, Thomas Bugden. The plan is of the Gower peninsula, Swansea Bay, and the development of Swansea harbour at the mouth of the River Tawe. I have enlarged the Swansea part of the map, and already we can see that some well-known places in Swansea have been labelled. Unfortunately, we must wait till the first census in 1841, to see who resided at these places. This map has been drawn using ink, instead of being engraved.

The next major map that was drawn of Swansea, was during 1852, by the Local Board of Health. The map is drawn to a huge scale of 10 feet, showing the town in immense detail. Anyone interested in these maps can obtain a CD from the archives. 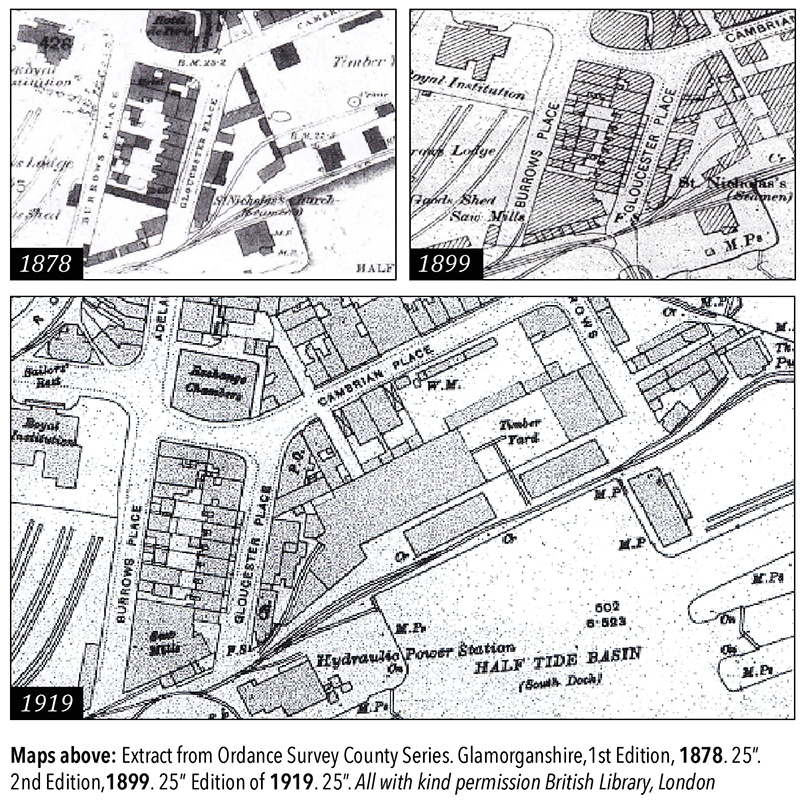 The First Edition map by the Ordnance Survey of Swansea, was published in 1878, with surveying work being carried out since 1867 with the scale of 1:2500 (1 cm on the map is equal 250m on the ground), as was the Local Board of Health. This map shows buildings, walls, hedges and even trees around the centre of Swansea. The Second Edition was produced in 1899, with surveying work starting in 1896. The 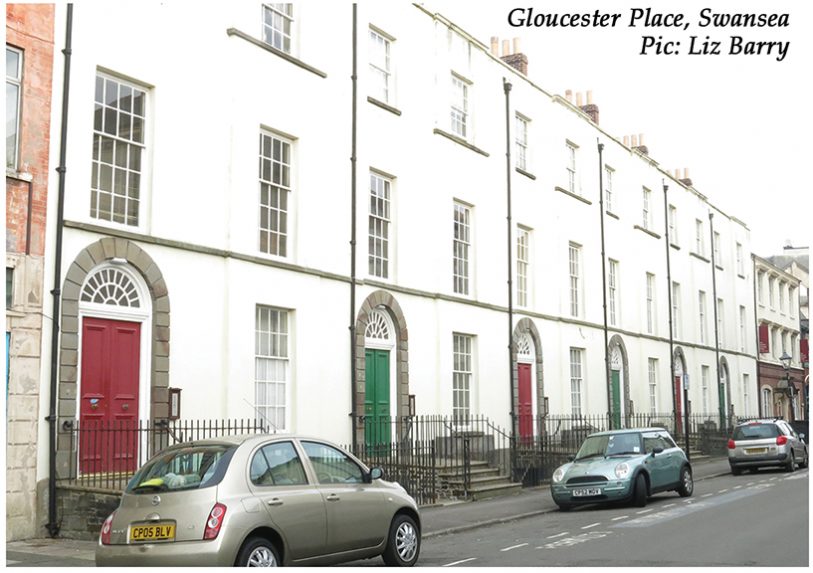 Following an excellent series aired on BBC2, A House Through Time, presented by David Olusoga, the ‘House’ in question was 62 Falkner Street, Liverpool. A house randomly picked to chart its history from its first inhabitants of the 1840s and 50s, to the present day. Posing a question, could this be done here in Swansea? I have already started!

In a previous article that I wrote in February 2017 titled History of a House, I made a start by looking at the history of 2 Gloucester Place with Stirling Benson, JP, who seems to be a man of mystery, not having completed the 1841 census. At this time there were just five houses and a public house, Gloucester House, which has long gone. During 1889 a murder was carried out and the landlord was brutally murdered. Gloucester Place has a small number of houses brimming with history, just waiting to be discovered.

2018 marks the centenary anniversary of the Armistice of the First World War, November 1918. Here Charles looks at the life of marine engineer William John Johnstone and the steamer S.S. Kingsley

The S.S. Kingsley was attacked and damaged on the morning of the 2 January 1918, by U-95, 3 miles east of Rundelstone Buoy, Cornwall.

A few days after the centenary anniversary of the confrontation, Mrs Lisa Johnstone-Davies contacted me, with a tale of her great-grandfather, William John Johnstone. I carried out some research using various sources, and can now paint a picture of what occurred on that fateful morning.

During the 1911 Census, William John Johnstone, (age 27), who filled in the census and called himself William Alexander, is living at 22 Calland Street, Landore, his occupation is listed at Marine Engineer. He is living with his wife, Mary Hannah, (age 29) and their one son, William Alexander, (age 6).

At the time of the events of January, William, now William John, is serving with the Mercantile Marine; he is the Chief Engineer on board the S.S. Kingsley. His merchant card has survived, listing all the boats that he served on during his career at sea.

On the morning of 2 January 1918, the S.S. Kingsley, was sailing back from Honfleur, France to Swansea laden with ballast, when it neared Cornwall. Meanwhile, at 3.45 a.m. the U-95, captained by Athalwin Prinz, has torpedoed and sunk the S.S. Gallier without warning – all the crew survived. I assume around about this time that the U-95 has surfaced and attacked and damaged the S.S. Kingsley as it was only about 300 yards away by gunfire. Most of the engine crew not including William, panicked abandoning their posts and running onto the deck, where 5 men were killed by shrapnel and 4 were injured. After the attack, the U-95 slipped below the waves, to attack and sink the nearby Italian steamer Christos Markettos. The U-95 itself was shrouded in mystery, when the captain A. Prinz, died on the 7 January at W. Ireland and the U-boat was sunk, by unknown causes off the coast of Hardelot, France on 16 January 1918 with all 36 hands lost.

The captain, Mr E. Evans was awarded the D.S.O. (Distinguished Service Order) and William was awarded the D.S.C. (Distinguished Service Cross) for his actions on board S.S. Kingsley on that fateful morning. Lisa stated that when William was waiting for a train in London to travel back to Swansea after attending a medal ceremony at Buckingham Palace, a woman presented him with a white feather because he was not in uniform!

It wasn’t long before William was back at sea, when he served on the S.S. Bruno. William served for 39 years at sea with the Mercantile Marines, from where he worked at Swansea Docks. Lisa’s aunt, Mrs Elaine Guppy cared for William later in life till his death in 1967 aged 82.