Last August we brought you news that the DVLA was running a competition for schools to design a computer game. The winners would receive a massive £3,000 worth of the latest IT equipment for use in their school. Here we follow up on the competition 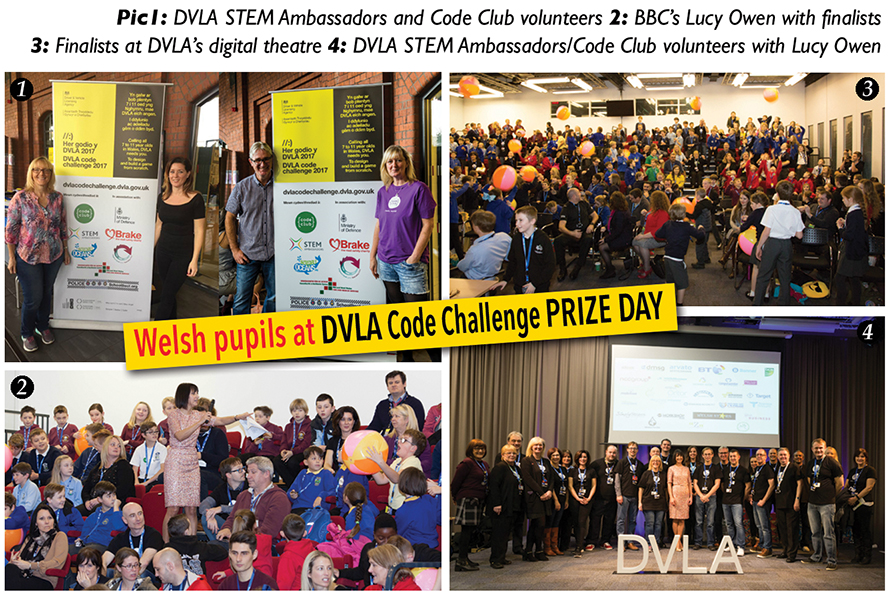 Teams from Gwyrosydd Primary School in Treboeth and Newton Primary School were among the shortlisted runners-up in DVLA’s national coding competition.

Five teams from schools across Wales were shortlisted to WIN one of five top prizes in the DVLA Code Challenge, which invited 7 – 11 year olds in Wales to work in teams of up to five to design and build a computer game from scratch. The teams were also asked to produce a 3-minute video describing what their game is about and how they made it.

BBC’s Lucy Owen announced that Usk Church in Wales Primary School was the overall winner of the competition at a gala prize day held on 28th November at DVLA’s digital theatre in Swansea. The team took away around £3,000 worth of the latest IT kit for use in their school.

The four runners-up also took away some big prizes as did the team that produced the best video. Every school entering the competition or that had signed up to take part via the live video link was included in a prize draw to WIN cutting-edge equipment such as the Lego Mindstorm, BBC Micro:Bit and Raspberry Pi.

Usk Church in Wales Primary School was voted the overall winner by the pupils who attended the event and those who took part in the live video link.

While there were five judges waiting to make the final decision in the event of a tie there was a clear winner on the day. The judges were DVLA Chief Executive Oliver Morley, Professor Faron Moller (Head of Computer Science at Swansea University), Leader of Swansea Council Rob Stewart, STEM Ambassador Co-Ordinator for Wales Sian Ashton and DVLA Chief Technology Officer Dave Perry.

The competition was sponsored by a number of local, regional and national firms and was held in association with Code Club and the STEM Ambas-sador hub Wales, Incredible Oceans, Brake, The four Police Forces in Wales and School Beat, Road Safety Wales, The Fire and rescue Service and the British Army.
DVLA Chief Executive Oliver Morley said:

“Congratulations to Usk Church in Wales Primary School on winning the competition today. Every team can be proud of what they have achieved. We’ve been thrilled with the standard of entries to the competition and it shows how much IT talent we have here in Wales.

“While the competition has now ended, we will continue to encourage young people to have a passion for computer programming as this will benefit both them and employers in Wales who increasingly look for these skills.”

The Challenge was so successful schools and sponsors enquired almost immediately about the next competition and how they could sign up.   This year -2018- DVLA will be launching another competition -so keep an eye on the competition’s website dvlacodechallenge.dvla.gov.uk where details will be posted soon.