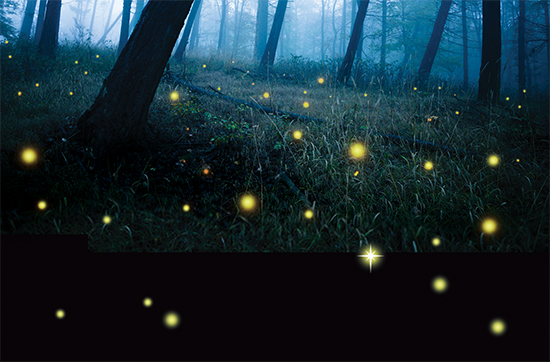 Few experiences are more enchanting than an encounter with glow-worms on a warm, still summer’s evening. Lighting up the undergrowth like a miniature night sky, glow-worms have long been an inspiration for writers and poets including Shakespeare and Wordsworth, the latter coining the beautifully descriptive phrase ‘earth-born stars’. Few other animals are at the same time so familiar and yet so alien, bewitching us with their glow at night while going about the rest of their lives so secretively that many details are still in the process of being discovered.

The glow-worm (Lampyris noctiluca) is the only one of the ca. 2000 species in the family Lampyridae (the glow-worms and fireflies, both rather confusing misnomers as they are, of course, all beetles) that has managed to become well established in Britain. Glow-worms and fireflies are much more at home in tropical climates. Jamaica, for example, is able to boast as many as 50 different species, although the country is only 1/20th the size of the UK. 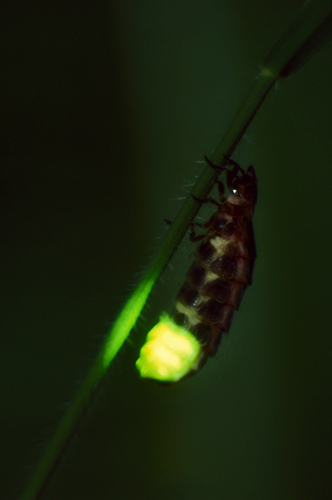 Although glow-worms never fail to delight us with their display, the motivation for their efforts is far removed from – and considerably more serious than – mere show business. The individuals we usually see glowing are newly emerged adult females (photo 1) which are using their glow to attract males to fertilize their eggs. Male glowworms, glow-worm larvae and even pupae are also able to produce light, but their light organs are much smaller than those of the adult females, making them considerably less bright. Also, males, larvae and pupae only glow sporadically and for short periods of time, usually when disturbed. Freshly laid glow-worm eggs, too, sometimes emit a gentle glow, and the larvae inside the eggs can be seen glowing through their semi-transparent eggshells when they are getting ready to hatch.

Glow-worms perform their magic by means of an exceptionally efficient chemical reaction in which 98% of the expended energy is transformed into light and only 2% is lost as heat. In comparison, in incandescent light bulbs as much as 90% is lost as heat, and even the highly energy efficient LEDs cannot improve on a loss of around 10%. 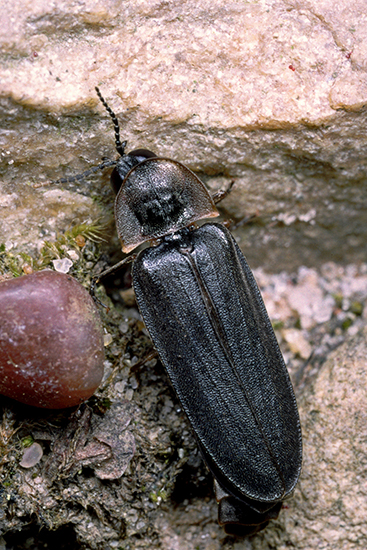 Female glow-worms need to be as efficient as possible in everything they do, because they are under a lot of pressure. Not only is their lifespan as adults restricted to a couple of weeks at the most, they also do not have any mouthparts and so are unable to feed during this period, relying entirely on the fat reserves they built up as larvae. Male glow-worms (photo 2) do not feed either, their only mission to locate a female to mate with in order to pass on their genes. For this purpose they possess a pair of fully formed wings complete with protective wing-cases, unlike the sedentary females, which remain wingless and larva-like and depend entirely on their alluring glow to attract their mates. 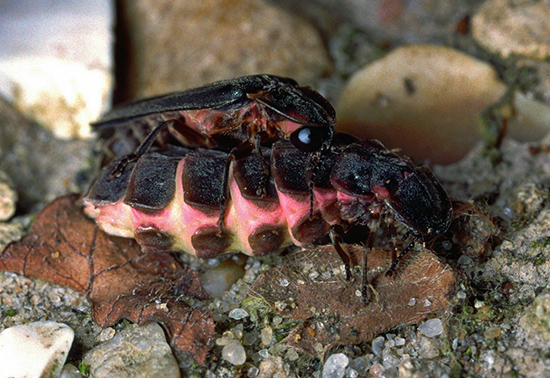 Just after dark, the hopeful females make their way up plant stems, expose the underside of their abdomen where their light organ is located, and start glowing. They often sway gently from side to side to maximise their chance of being spotted by the flying males. Male glow-worms have exceptionally large eyes to help them in their quest and, once they have spotted a female, they are able to descend with fascinating agility and accuracy, often landing virtually on top of their target. Sometimes two or more males arrive at the same time. In this case, vigorous jostling ensues, with each male vying for a position on the female’s back and its opponents attempting to dislodge the male in ‘pole position’ by energetic levering with the front end of their thoracic shields. 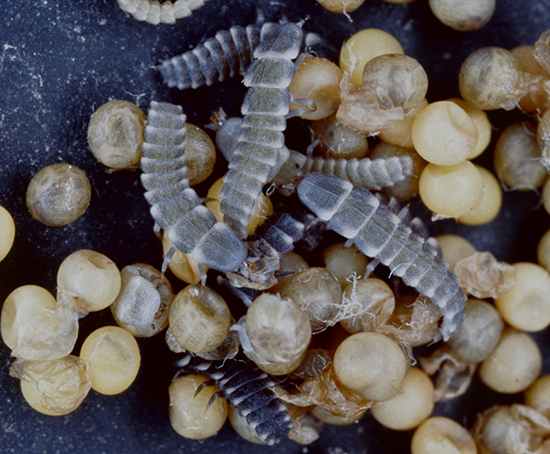 As soon as a pair has been united, the couple returns to the ground (photo 3) and the female stops glowing. Mating can be a protracted affair and often lasts for several hours if the pair is left undisturbed. At this stage, the female’s abdomen is greatly swollen with eggs, which range in number from 50 to 150, depending on her size. Soon after mating the female starts laying her eggs, which she places singly or in small groups in moist, sheltered spots, lightly gluing them to the substrate. The tiny (ca. 5mm long) larvae hatch after about one month (photo 4).

The young larvae have a lot of growing to do before they are big enough to pupate, so much so that it usually takes them almost two years to reach maturity. Because they hatch in late summer, glow-worm larvae do not have much time to feed in their first year before it becomes too cold and they have to slow down for the winter. 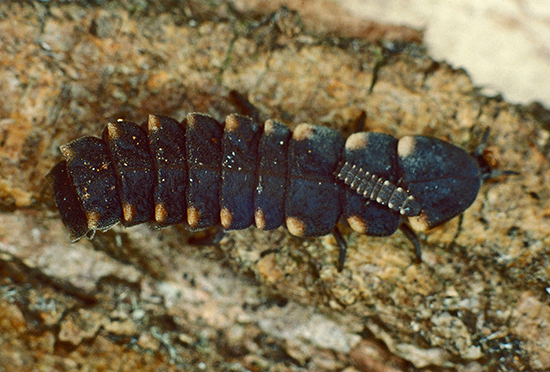 As a result they remain relatively small until the spring of their second year. During this second year, however, they feed voraciously and grow to as much as 300 times their original weight. In photo 5 a newly-hatched larva has been placed on top of a fully-grown individual in order to illustrate their remarkable size difference. 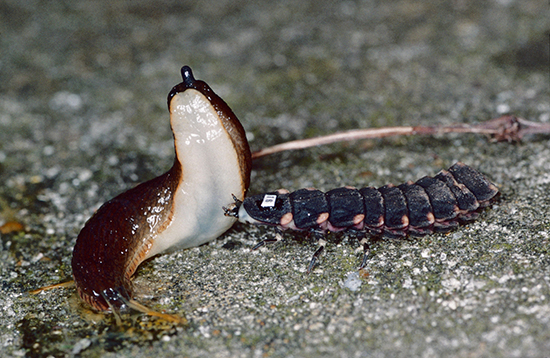 6. Glow-worms larva attacking a slug (this individual has been marked for scientific study) 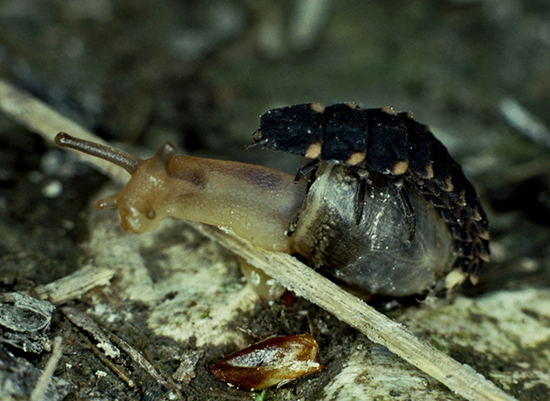 This exceptional growth rate is fuelled by an exclusive diet of liquefied slugs and snails. In order to be able to access this unusual food source, glow-worm larvae have a number of fascinating adaptations. First of all, in order to overcome their prey, which is often several hundred times bigger than them-selves, they possess sharp, syringe-like mouthparts which allow them to inject a paralysing digestive fluid into the soft-skinned molluscs (photo 6). Having delivered a number of bites, the larvae have to wait for the toxins to take effect. If their prey is a snail, they will often climb onto the shell of the doomed animal as it tries to flee (photo 7) and ‘ride’ on it until the paralysis is complete, sometimes continuing to deliver occasional bites in the process. Although lethal to their prey, these mouthparts are not strong enough to pierce human skin, so glow-worm larvae are completely safe to handle should the need arise. 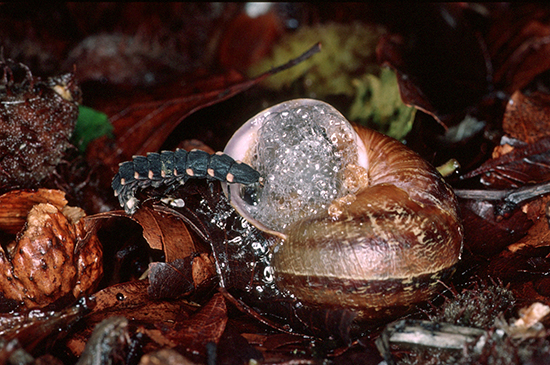 8. Glow-worm larva getting ready for its meal

When a glow-worm larva’s prey finally stops moving, the larva starts preparing its meal by regurgitating more digestive juices onto the mollusc’s flesh to soften it, ready to lap up. The larva has to be careful to avoid the sticky defensive mucus produced by the injured animal, because it can easily trap or engulf a small larva (photo 8). The slug or snail, although paralysed, is usually still alive as the larva starts to eat. Very occasionally, large individuals attacked by small larvae have been known to survive their ordeal and to crawl away some time after the larva has finished feeding. 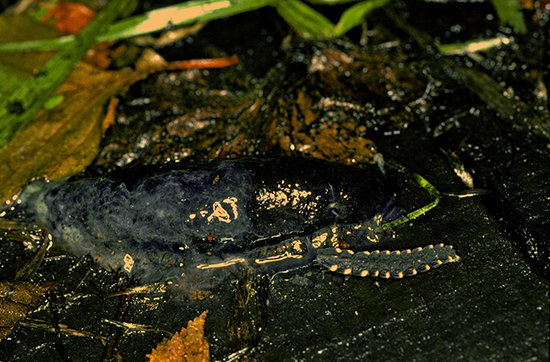 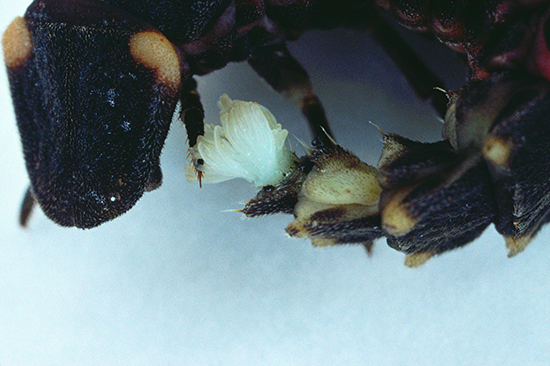 10. Glow-worm larva cleaning its leg with its tail organ 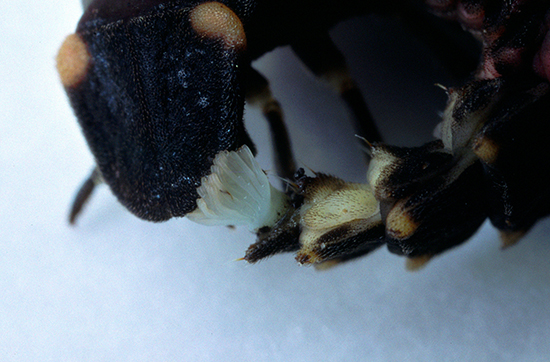 11. Glow-worm larva using its tail organ to clean its head

Feeding can take many hours and is an extremely messy affair (photo 9). Even despite their best efforts to keep themselves from becoming covered in slime and semi-digested flesh, glow-worm larvae merge from their feasts somewhat the worse for wear. But they do not remain so for long. By means of laborious grooming with a special multi-purpose organ at the tip of their tails (which they are able to neatly retract when not in use), the larvae are able to remove the notoriously sticky mucus from their bodies (photos 10 & 11). This tail organ, which superficially resembles a small mop, has an exquisitely intricate microscopic structure made up of minuscule combs and hooks. The combs are used for cleaning, while the hooks allow the larvae to also use their tail organ to grip on to surfaces, a very useful function when they have to pull themselves free if their front ends have got stuck in a meal, or if they happen to lose their footing while walking along a twig (photo 12). Sometimes they also use their tail organ to help propel them-selves along as they walk. 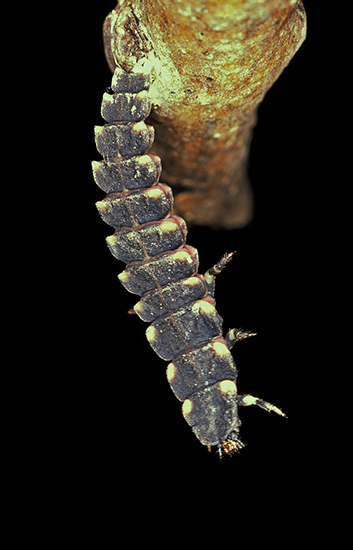 12. Glow-worm larva using its tail organ to stop itself falling off a twig after losing its footing

Even though their glow is thought to give glow-worm larvae some protection from predators by warning them that the larvae may be distasteful, still fewer than one in ten larvae manage to successfully evade predators, avoid disease and find enough food to complete their development.

The lucky survivors pupate in late May or June (photo 13) and will emerge as adults on average 10 – 13 days later (males taking more time to metamorphose), ready to perform their magic for another season. 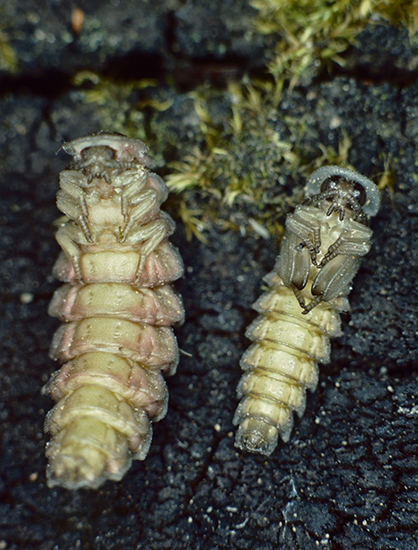 13. Glow-worm pupae, female on the left, male on the right (note large eyes and wing buds)

Glow-worm numbers have been declining across the country, partly due to intensive agriculture, partly due to light pollution, and also because the egg-laden females are unable to move far enough to colonize new habitats. Fully-grown larvae of both sexes go through a period of increased activity just prior to pupation during which they regularly travel some distance, often even walking during the day. Those distances, however, though considerable for a glow-worm, are usually not nearly far enough to have a significant impact on the spread of the species, and the little beetles are no match for modern obstacles such as busy roads. 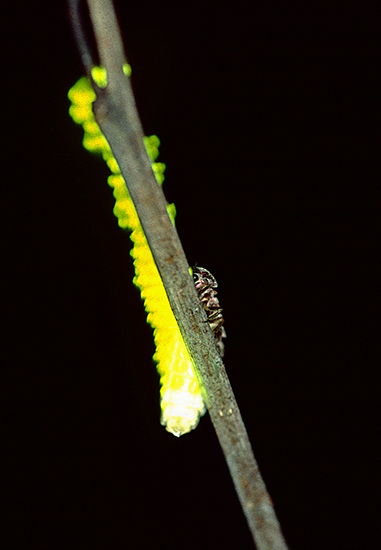 Luckily, glow-worms can still be seen on Gower, and in recent years glowing females have been recorded from Llanmadoc, Llangennith and Whiteford. They are most likely to be spotted during the first couple of hours after dark on warm, dry and calm evenings during June and July. When approached with care they usually continue to glow, making for an exciting photo opportunity. If the photograph is taken with flash and the shutter kept open after the flash has fired, it is possible to record the individual as well as its glow. It can make for very interesting effects if the animal decides to move off after the initial exposure, leaving a radiant – and perhaps ever so slightly magical – trail of light behind it as it goes (photo 14).

All photos in this article are courtesy of John Tyler, naturalist and author of ‘The Glow-worm’. The book as well as a selection of cards featuring his nature photography are available from his website www.johntyler.co.uk