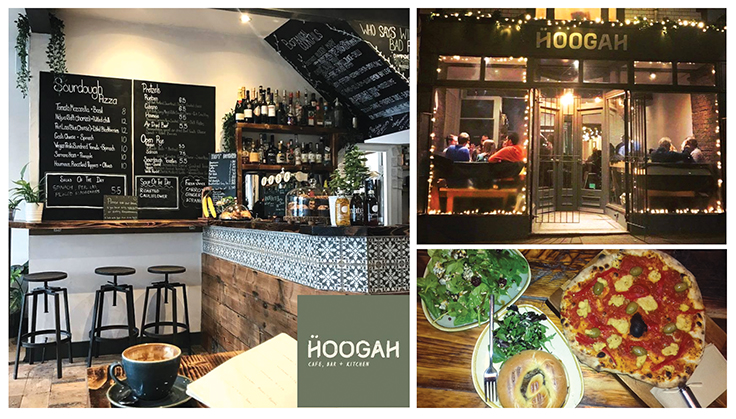 Hoogah opened in Brynymor Road towards the end of last year – and since then it was on my ‘go to’ list. As you approach it, you’re greeted by the sight of hundreds of twinkly fairy lights around the door – an indication of what awaits inside. Hoogah is a variation on the Danish word hygge that seemed to enter the English language last year. It translates as the art of cosiness or happiness – but it’s one of those words that actually has no one meaning. Think warm, cosy, happy, candlelight etc. and you’ll get the picture.

Books on hygge proliferated at Christmas with titles such as ‘The Little Book of Hygge’ and my favourite ‘The Year of Living Danishly’.

The interior has a distinctly Scandi feel – reclaimed wood benches and tables, tea-lights and wonderfully cosy woollen throws and cushions. It’s very relaxed and the perfect place to unwind with a beer – of which they have a good selection of craft produced.

Hoogah is the brainchild of Alec Merriman, Tamara Williams and Ange Bettany. Alec and Tamara run the Little Valley Bakery in Parkmill and are known for their sourdough breads. This is very evident from the menu which features heavily on carbs – pizza and soft pretzels being the main stays.

The soft pretzels are quite different from the crispy salted pretzels that we see in packets on the supermarket shelf. Think more bagel-like, split, toasted and filled. The ‘Ruben’ we shared was filled with salt-beef, mustard, sauerkraut and smoked cheese. The beef was slow-cooked and the portion generous.

The concept of hygge is conducive to sharing, so we added a sourdough pizza topped with Perl Las cheese, hummus and olives and a salad of spinach, Perl Las and pickled blackberries. Who would have thought that the humble blackberry could be elevated to such heights? The balance of sweet and sour with a juicy burst was perfect. I will certainly be foraging in the autumn to replicate this little number.

I will grant you that it is an unlikely setting for a restaurant with Spanish and Italian influences but I promise you Skewen had a distinctly Mediterranean feel on a Friday night in late February. La Casona’s chefs are from Spain and Italy – you only have to look at the menu to see just how authentic the food is. The list of Spanish starters reads like a very comprehensive tapas menu: higado de pollo – chicken livers, chorizo al vino, gambas en ajo while the Italian side of the menu tempt with bruschetta, insalata caprese and cannelloni.

La Casona – big house is modern in style but with traditional touches that you’d expect in an authentic-ally Mediterranean restaurant. The bar is stocked with literally hundreds of bottles of wine – ranging from normal 75cl to enormous Nebuchadnezzar – they obviously know how to party in Skewen.

Faced with a decision as to whether to go down the Spanish or Italian route, it didn’t take me long to opt for Spanish – simply because the choices were more unusual. It’s not often you find chicken livers on a menu. These were in the sort of garlicky sauce that necessitates a spoon or a basket of bread. The livers were soft and just slightly pink in the middle – perfection. Our other choice was creamy mushrooms – again the garlic was in evidence and the plate was clean when it was taken back to the kitchen.

I’ve often looked at recipes that call for a salt crust and balked at the cost of using expensive rock salt that will simply be discarded once the cooking process is finished. So it didn’t take me long to decide that the whole sea bass cooked this way was going to be my choice. The waiter brought the silver domed platter to the table and revealed the bass in its salty coat. He deftly removed the crust and skin from the fish and served the succulent fillets. This was a seriously good fish – fresh and white and perfectly de-boned.

Mixed grills don’t have to consist of steak, gammon and sausage – especially if it’s a Spanish mixed grill. Tender breast of chicken, lamb chops, chorizo, beef strips and chicken wings served with salty, crispy potatoes brought the whole concept of a grill to another level.

So, if you’re in need of a little Mediterranean hosp-itality and can’t travel far, pop over to Skewen where you’ll be treated to a taste of Spain or Italy – the welcome will be the same.