Tiger’s Nest Monastery, one of the most holy sites in the kingdom and iconic tourist destination resting precariously on a cliff face 3,000 metres above sea level in the Paro Valley

Bhutan – Kingdom of the Thunder Dragon

Liz Barry has been travelling again, this time to the Buddhist kingdom of Bhutan where she found a country that fiercely guards its traditions but embraces global development. 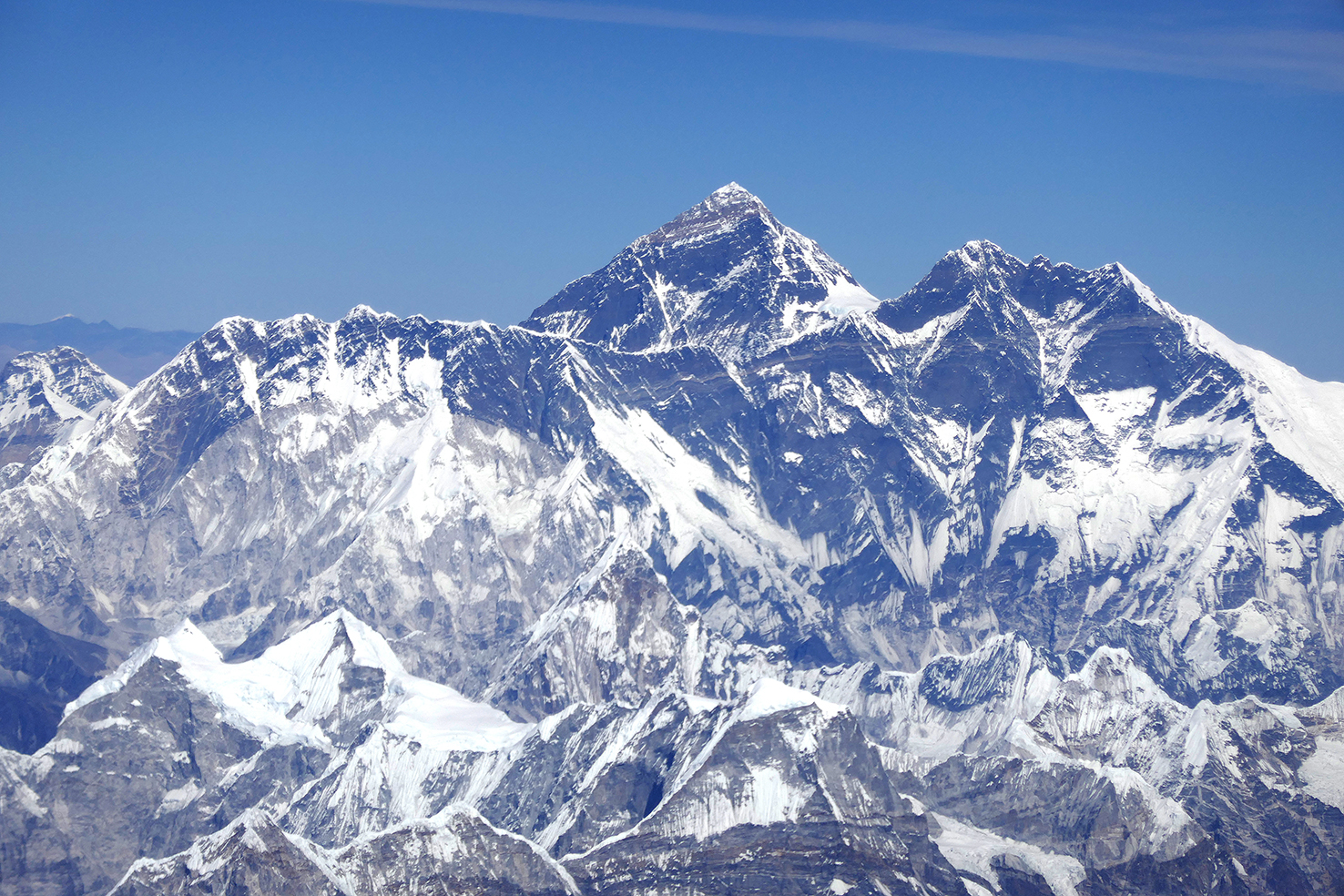 Mount Everest, the highest mountain on earth straddles the border of two countries, China and Nepal

Bhutan is a Himalayan kingdom, landlocked, between China and India. It’s nearly twice the size of Wales with only a quarter of the population, but one thing they do have in common is the presence of a dragon on their national flag.

Arriving early for check-in at Kathmandu airport was a must, if we were to bag a seat on the left hand side of the plane, to get the best view of the Himalayas and Mount Everest. Our arrival at Paro airport, which is one of the most challenging landings in the world, was equally dramatic. As we weaved through the lush green Himalayan foliage the plane’s wing tips appeared to brush the treetops of the forested slopes. The intercom crackled into life and the reassuring voice of the Captain announced, “If this is your first visit to Bhutan, don’t be alarmed – this is a normal approach”.

We touched down and stepped onto a run-way surrounded by mountains, their tops tinged with gold in the afternoon light; clusters of white prayer flags quivered in the wind, and like every other passenger we stopped to take a photo.

Visitors to Bhutan pay a daily tariff of $250 dollars which covers accommodation, food, transport and an official guide. The government’s policy is to build a sustainable tourism industry that is financially viable, and that also limits the environmental and cultural impact of mass tourism, hence the country’s ethos Gross National Happiness is more important than Gross National Product.

We leave the airport to be greeted by Llanwang and Kinzang our guide and driver who over the next six days would inform us about the customs, traditions and culture of their enchanting country. Leaving Paro we drove along mountain roads to Thimphu the capital, the centre of government, religion and commerce, which is just over an hour away. The following day began with a visit to an archery field. Archery is the national sport and a tournament was already in progress. The men wore Ghos, a knee length robe tied at the waist by a belt-like cloth called a kera.

It can be quite a raucous affair due to the antics of team members, chanting, jumping, arms flaying in the air miraculously dodging arrows in an attempt to distract their opponent. However when the target is hit a dance is performed celebrating the victory.

Next stop was the weekend farmers’ market. Here we saw vegetables in piles on the floor, predominated by red chillies which are used in the staple Bhutanese dish of Ema Datshi – a spicy stew of chillies, onions and a cheese made from yak’s milk.

Later we walked through an ancient covered bridge that crosses the Wangschu River to the handicraft market, where there were stalls selling masks that replicate those used in the Tsechu – masked dance ceremonies performed in the Dzongs (fortress), jewellery, religious artifacts, bowls crafted from rhododendron wood and exquisite brightly woven textiles. 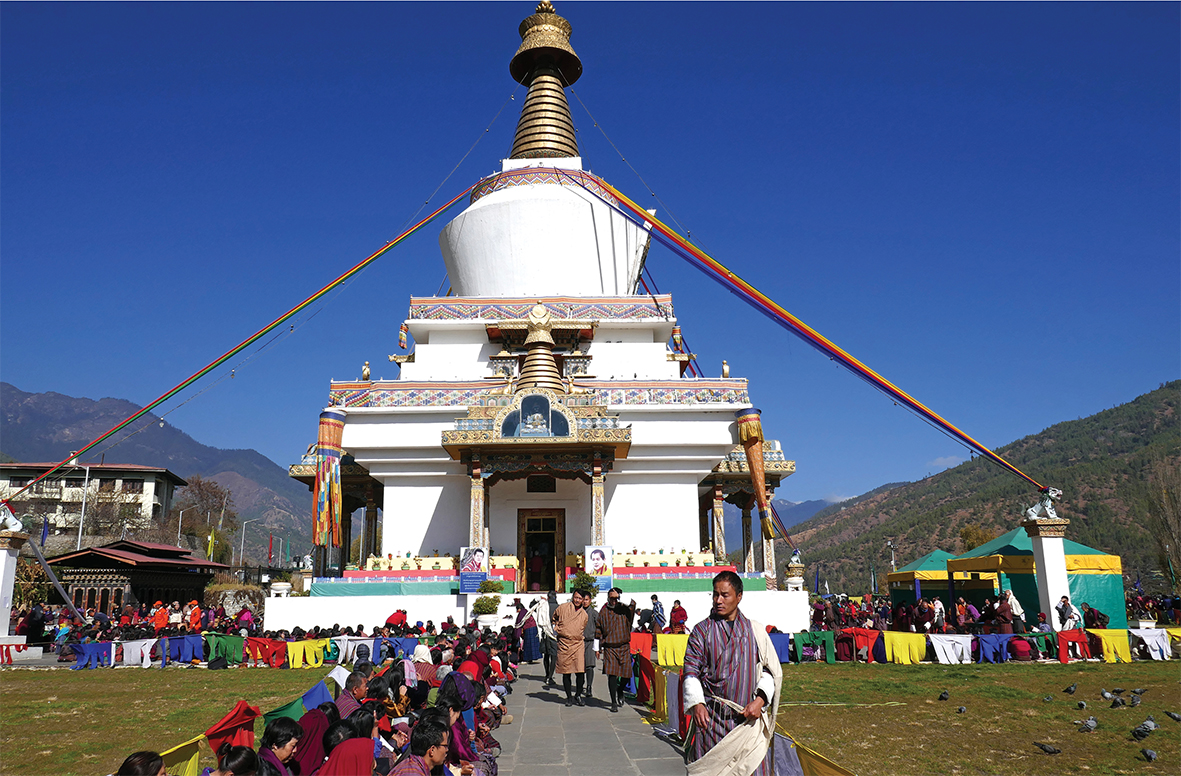 It so happened that our arrival coincided with an auspicious day, the Night of the Full Moon which was being celebrated at the National Memorial Chorten better known as a Stupa (built in 1974 honouring the third King). Here Buddhists circumambulate the chorten and spin the giant prayer wheels in quiet contemplation. A steady stream of Bhutanese wearing beautiful traditional garments, the men in Gho and ladies the Kira (long tunic) flowed into the walled courtyard, joining the hundreds of people already seated.

Lines of coloured prayer flags tied to the magnifi-cent golden topped Tibetan style stupa, swayed in the wind; the steps obscured by the abundant offerings of fruit, food and flowers.

Monks in mustard robes, wearing red hats shaped like the curve of a crescent moon, led the procession. Sun glinted off twirling hand-held prayer wheels to the constant chant of mantras from the devotees, anticipating a blessing from the honoured Lama.

I returned that evening when the moon was yet to rise; the white Stupa was lit by the glow of thousands of flickering butter lamps. The deeply spiritual nature of the people was apparent as still they came, shuffling past the Lama who was now seated inside, shielded from the cold, as the ceremony continued late into the night. 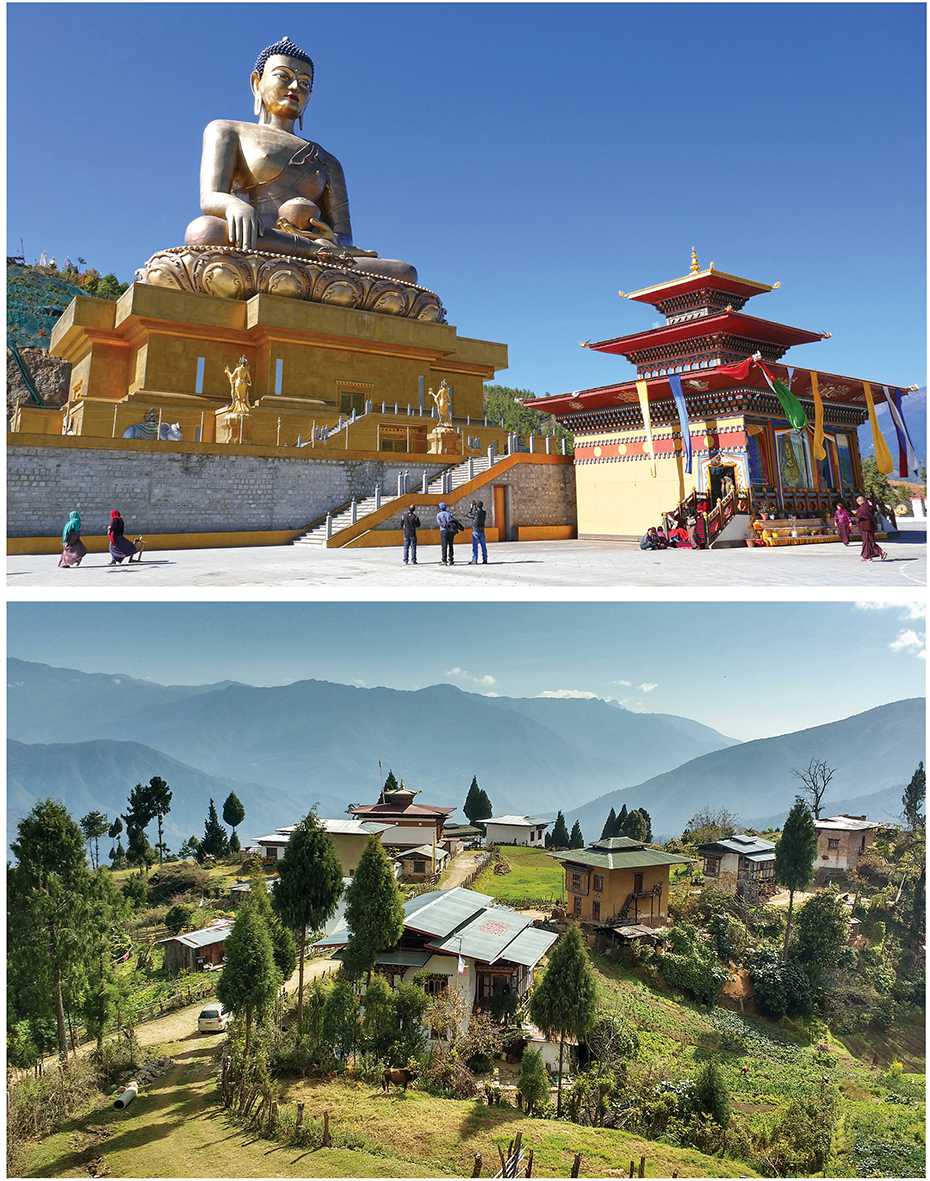 On an elevated platform rising above the valley, sits one of the largest statues of Buddha in the world. Buddha Dordenma is 50 metres in height and was constructed in China. Like a jigsaw, it was cut into pieces, transported by truck and then put together again. Made of gilded bronze, the throne on which it is seated houses a meditation hall in which 125,000 smaller Buddha statues have been placed. As the population of Thimphu is around 100,000 it means there are more Buddhas than human beings in the city.

Leaving Thimphu behind we travelled across the Dolchula Pass. The crest at 3,100 metres offers a panorama of the snow dusted Bhutanese Himalayas, a stunning backdrop to the tranquil setting where 108 memorial chortens, (stupas), stand. Druk Wangyal Chortens were commissioned by the eldest Queen Mother as an act of atonement for the loss of life in a battle which took place in December 2003 between Assamese insurgents from India and soldiers of the Royal Bhutan Army. 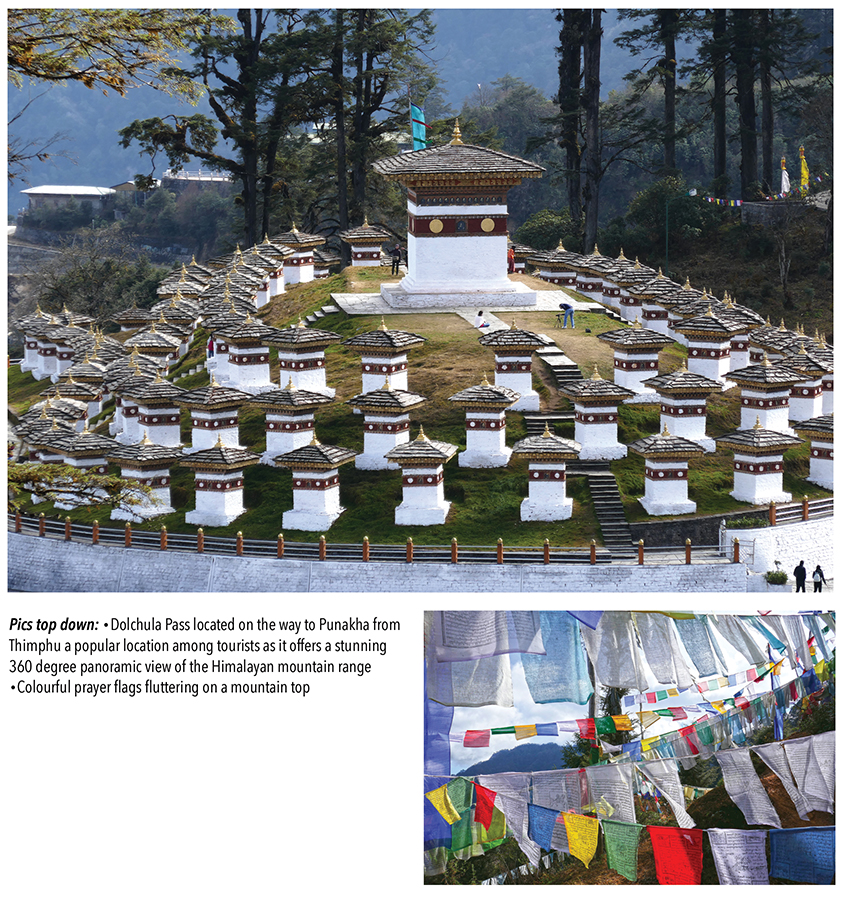 Prayer flags were draped amongst the branches of the pine trees, each colourful piece of cloth represents one of the five basic elements, blue for space, white air, red fire, green water, and yellow earth, Buddhists believe the prayers and mantras of compassion and goodwill are spread by the wind. I added one more string, purified by the smoke from juniper branches, to create good karma. 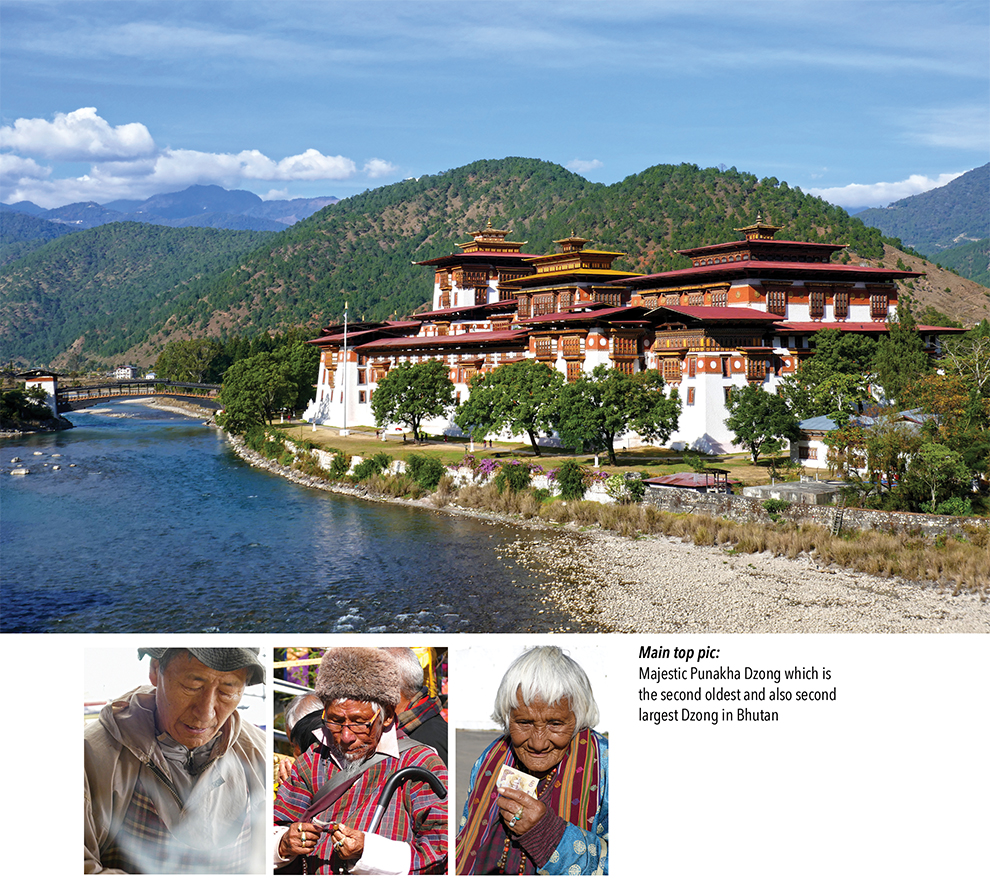 Standing on the confluence of two rivers, the Mo Chhu and Pho Chhu the towering white walls of a six storey fortress Punakha Dzong is reflected in the brilliant blue glacial melt water. Built in the 17th century, it is the winter home to the Bhutanese central body of monks. To reach this picturesque landmark we stepped over sleeping dogs lying on the sun- warmed planks of an orange tinted, covered bridge.

The entrance is framed by delicate pink cherry blossom. The interior is equally impressive and consists of three courtyards (docheys), a monastic quarter (one son from every family usually attends a monastic school), a prayer hall ornately decorated with exquisite Thangka paintings depicting ancient myths and stories, manuscripts, statues and incredible butter sculptures made by the monks from yak butter and dye.

As we were leaving we encountered a quartet of gracious ladies sitting on copper steps worn smooth by countless footsteps. Llanwang our guide was on hand to translate as we chatted. One 80 year old, had beautiful eyes that glistened when she talked, her grey hair was styled in a bob – a style adopted by women of a certain age. Her prayer beads in hand, her fingers were constantly moving, counting the number of times a mantra is recited. 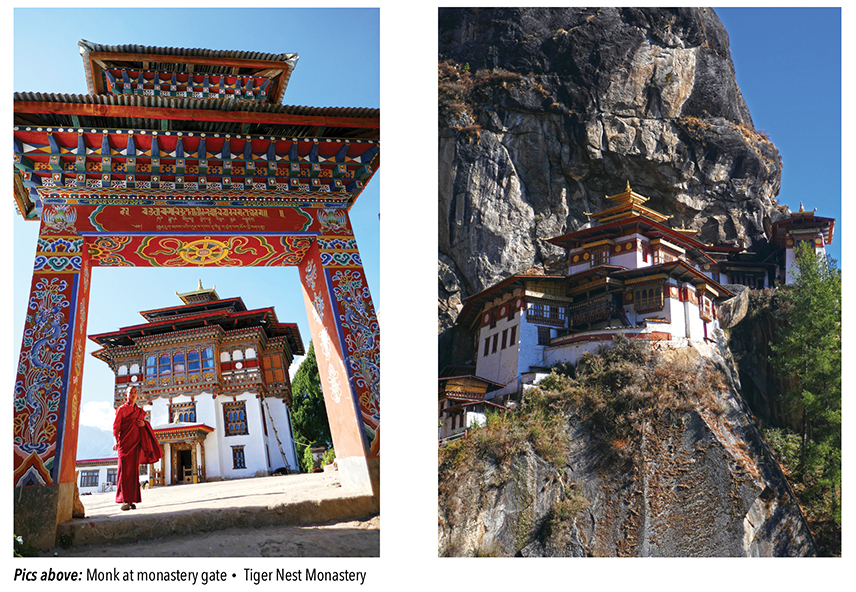 Religion plays an important role in all aspects of life in Bhutan and one of the most iconic and spiritual sites is the Tiger’s Nest Monastery which clings to a cliff face 900 metres above the Paro Valley. Legend says Guru Rinpoche flew to the site on the back of a tigress; he meditated in a cave for many months, subdued local demons and introduced Buddhism to Bhutan. Many centuries later a monastery was built on this auspicious site.

We travelled through the valley, a rainbow of prayer flags bringing colour to brown wooden farmhouses shrouded in mist. As we drove into the car park, as if on cue the clouds rolled back revealing the monastery seemingly floating in the blue sky far above. Realisation dawned that I had a steep climb ahead. I had chosen to ride part of the way; my horse picked his way skilfully over stones and tree roots which crisscrossed the dusty trail. I received many envious glances as walkers stopped to catch their breath and peel off layers of clothing as the sun grew hotter.

After nearly an hour it was time to dismount and make our way to a tea house which is a meeting point for people, horses and guides. The trek there and back takes the best part of a day, with over 800 steps to climb and a gorge to cross beneath a cascading waterfall. 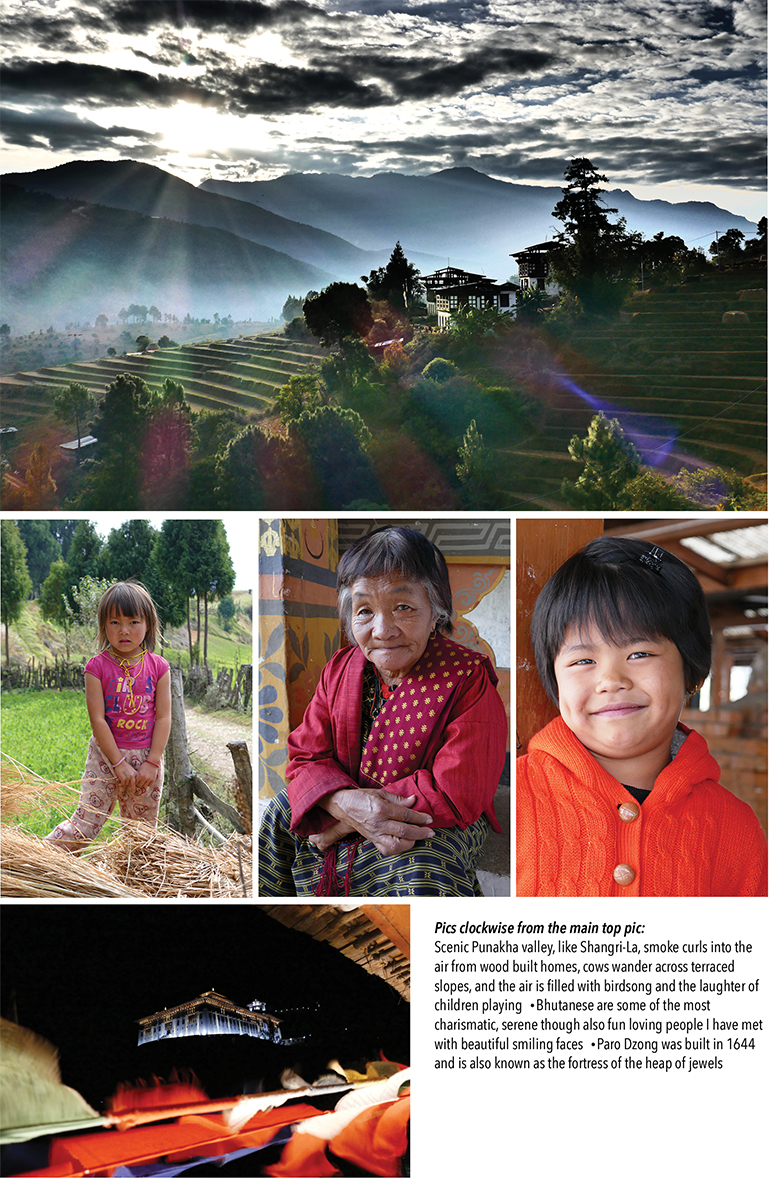 It is an amazing feat that monks constructed a monastery in such an isolated location, carrying building materials and religious artefacts along the same route we had travelled.

Inside, maroon-robed monks appeared and disappeared along dimly lit corridors, the hum of their chants echoing through the wooden doors. The room was scented with incense and lit by the glow of ancient butter lamps. Traditional butter lamps burning clarified yak butter are found in all Buddhist temples and monasteries throughout the Himalayas.

The effort to reach the golden roofed Tiger’s Nest Monastery was so worthwhile; from the balcony the views over the canyon were spectacular making the whole journey a truly unforgettable experience.

Our last night came all too soon; the ending like a scene from a Disney movie as we stood beneath Paro Dzong, illuminated like a fairy-tale castle, white walls set against an inky black night, prayer flags threaded across a wooden bridge and the sound of water tumbling over stones on the river bed below. It was a perfect ending to our stay in a truly magical kingdom.