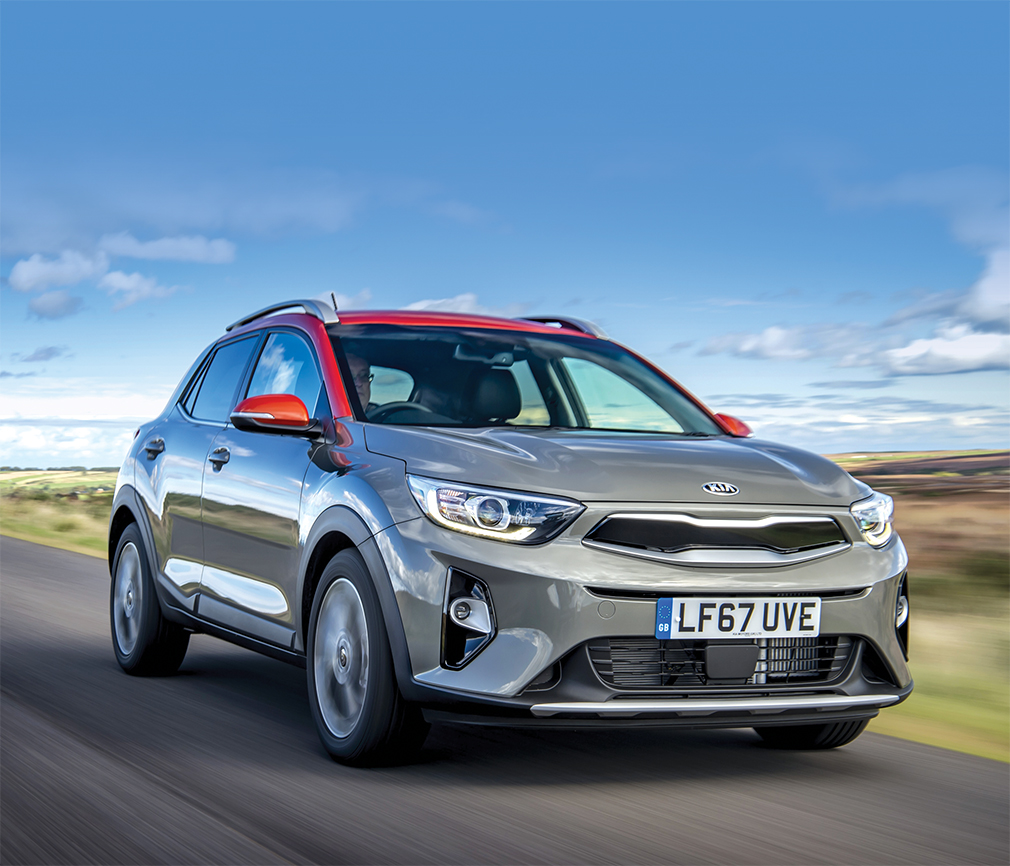 If you’re still struggling to decipher quite what the difference between a 4×4 and crossover is, all will be revealed, it would appear, at your local car wash.

After driving Kia’s new Stonic during a week in which the weather included freezing-fog, drizzle, more mist than can ever be considered healthy, a good downpour or two, sleet, and remarkably, the odd sunny spell too – they’re rare out here on the Welsh border, especially in February – it’s safe to say the latest entrant to the Kia line-up was looking more than a tad grubby. Now I’m not usually one to shirk my chores; I’m more than happy with a bucket of suds and chamois, but time was tight, it was chilly, it was the end of a long week, I had a pressing appointment…

OK, no more excuses. Anyway, the lazy-wash it was.

As copious gallons of water and foam were being sluiced over the Stonic’s chunky bodywork, 17” rims, standard fit roof-rails, and trademark Kia “tiger grille” in a bid to dissolve the detritus, I Bluetoothed my phone, turned up the DAB to drown out the sound of the jet-wash, and browsed the Stonic’s press bumpf. Whilst also closely inspecting my immediate surroundings.

I thought the Stonic felt familiar – and I’m not just talking about the brilliantly clear dashboard, sturdy feeling switchgear and multi-function steering wheel. It’s based upon the same underpinnings as Kia’s Rio hatchback: It shares the same 2,580 wheelbase but it’s slightly longer overall. And of course it’s obviously taller, by 70mm in fact. It thus offers more ground clearance – 42mm to be exact – but similar (or in some cases perhaps slightly less) space inside to many a supermini. Rivals include Nissan’s Juke,

Citroen’s C3 Aircross, the Renault Captur, sister brand Hyundai’s Kona, and the as yet to be driven by me, SEAT Arona, and Skoda Koraq. The name incidentally comes from mixing the words Speedy and Tonic.

Hmm… on first impression neither of those words immediately springs to mind. Despite Kia’s best efforts to make the Stonic look a bit funky on the outside, and offer various “personalisation options”, in reality the Stonic’s interior is a bit on the bland, dare I say, cold-feeling, side. It’s comfy enough and the layout’s good, the driver’s seat is height adjustable, the steering column adjusts for both reach and rake, and there’s head room aplenty. But, overall it’s all a bit dark. Some of the materials used clearly show that Kia haven’t totally let go of the hard and scratchy stuff just yet either. On balance though the Stonic’s cabin still feels much better screwed together than that of its Gallic contemporaries.

Also, whilst Stability Control is standard, as is hill-start assist, you will have to upgrade from an entry ‘2’ model to a First Edition if you want the full safety equipment inventory which adds autonomous emergency braking, blind spot warning, and driver attention assist.

Let’s not be too harsh. Where the Stonic does score highly is under the bonnet. Quite simply Kia’s 1-litre 3-cylinder engine is a gem. Not only does it pack a punch way beyond what its size would have you believe – 118bhp, and 171.5lbft of torque available between 1,500 and 4,000 rpm – it’s full of character, spools up quickly and smoothly, and when coupled to the six-speed manual gearbox, thrums happily along at motorway speeds, whilst delivering near diesel-like fuel economy and emissions figures. It is excellent.

The handling’s not bad either – well, for an SUV. Needless to say what is in effect a super-mini on stilts is never going to deliver the ultimate in driver entertainment or feedback, but around town the Stonic feels both eager and nippy. And once out in the open there’s little body roll. The steering is nice and precise too. It is a tad firm and jiggly though, and road surface imperfections can clearly be felt by all. But personally I’d rather that than something that’s overly soft and stodgy. Oh! And one other thing: The Stonic is purely front-wheel drive. Those go-almost-anywhere looks, they’re just for show. Pack a snow shovel if you’re going off-piste.

So what of the carwash?

Ten or so minutes later the Stonic was looking decidedly more spick-and-span. The cost for wash and a dry? £7. I checked the price list: 4x4s are £10. The Stonic therefore is definitely a crossover.

To sum-up. If you want the looks, but not the associated costs, maybe Kia’s Stonic is the very car for you. It comes with a 7 year warranty. And, it’ll cost you less to keep clean too!