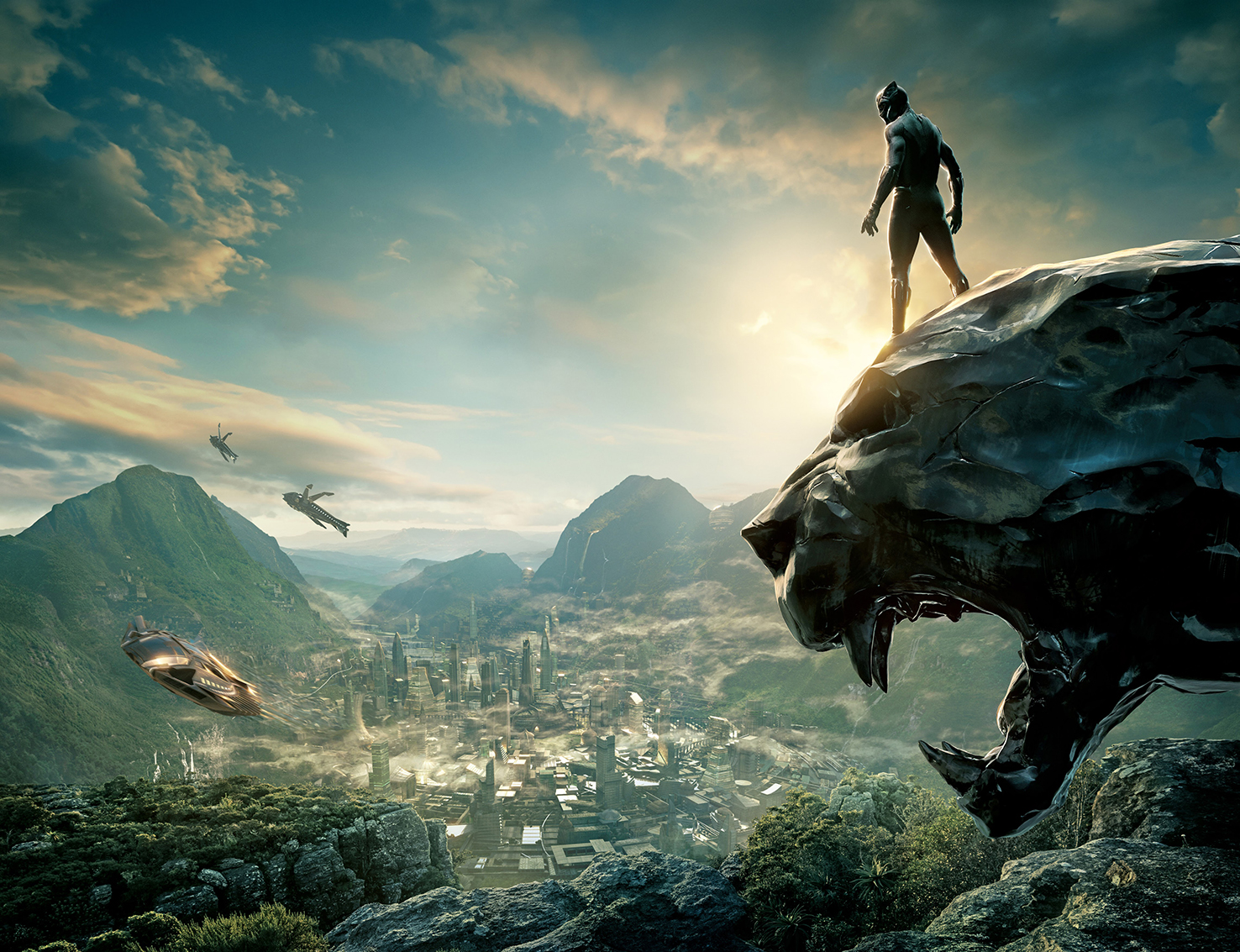 Emlyn’s film pick for March is Black Panther, a science fiction/fantasy, American superhero film based on the Marvel Comics character of the same name. Emlyn’s previous recommendations have ranged from Paddington Bear to Planet of the Apes, both of which have proved hits with the Bay team – maybe Black Panther will be our introduction to the super-hero franchise

Quite early in Black Panther, one character says to another: “just because something works, doesn’t mean it can’t be improved”. It feels like a mission statement for the film as a whole, both in terms of the themes it’s expressing and its position within the Marvel Cinematic Universe. Sure, Marvel’s in-house film division has been a success story almost without equal for the last decade, but that doesn’t mean it can’t be better still; and as crazy as it seems to say so, between Guardians of the Galaxy Vol. 2, Thor: Ragnarok and now

Black Panther, it feels like they’re just getting started. The story picks up shortly after the end of Captain America: Civil War, with Prince T’Challa returning home after avenging the death of his father, King T’Chaka. The home in question is the isolated, secretive, technologically-advanced African nation of Wakanda, where he’ll face new challenges in the form of a slimy Afrikaner arms dealer (an old nemesis of his father) and a mysterious mercenary called Killmonger, who has a grudge against the Wakandan throne. 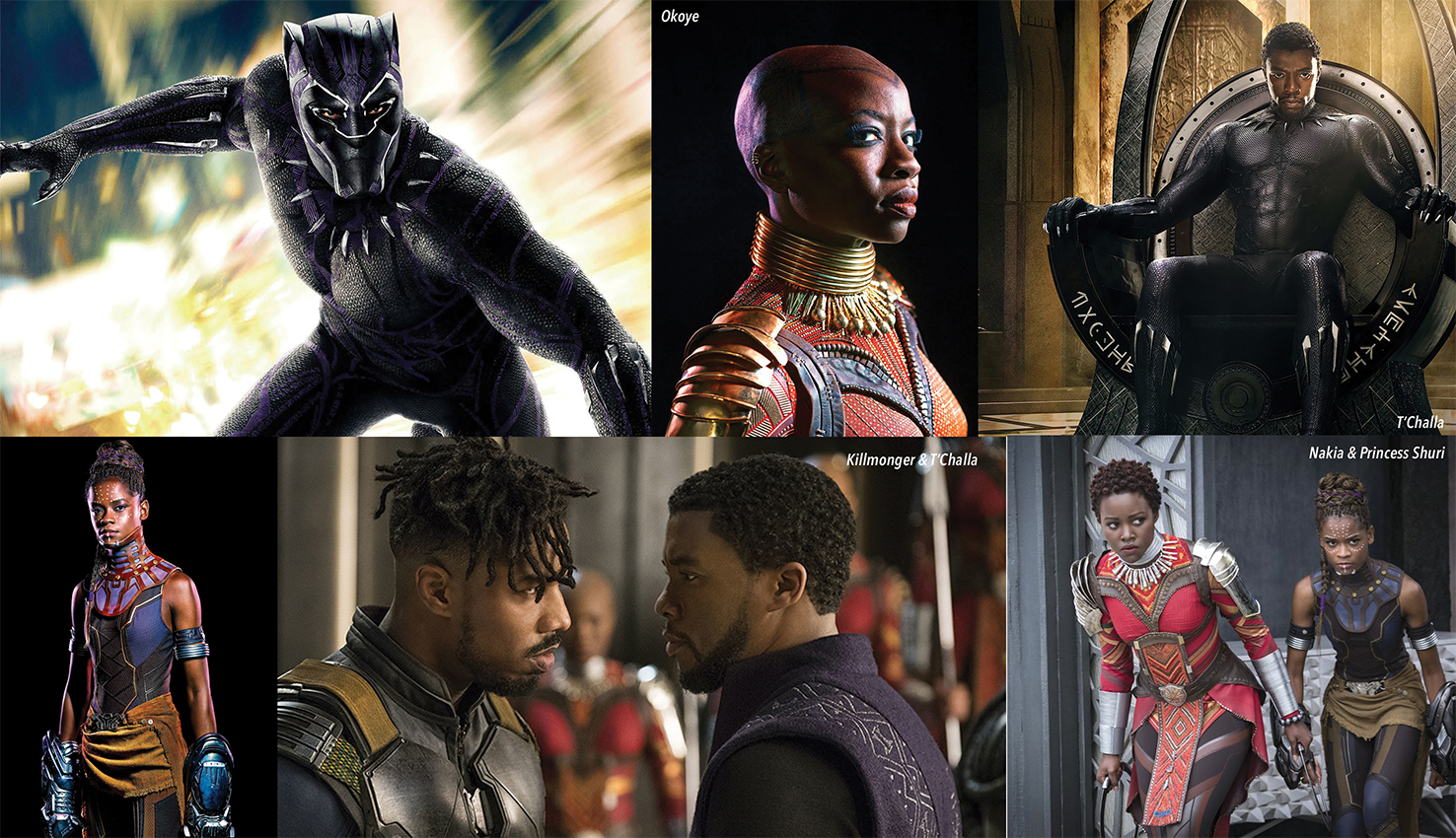 From the off, this feels distinct from the rest of the Marvel output, in no small part due to the look of the film. Director Ryan Coogler and cinematographer Rachel Morrison – nominated for an Oscar this year, the first woman to ever be nominated in that category – have delivered a thrillingly vibrant, lived-in world that is rarely less than beautiful to behold. T’Challa’s coronation stands out particularly strongly as an exuberant explosion of colour, music and dance: a wondrous vision of an Africa untouched by the scourge of colonialism. Marvel has seriously upped their game from a production design standpoint lately, and that winning streak continues here. It would be a big oversight not to mention the genuinely outstand-ing costumes, blending inspirations from all over Africa, with the Maasai-influenced garb of the Dora Milaje, the Wakandan royal guard, being a notable highlight.

But where this breaks from the Marvel template in some respects, it sticks to it in others: chiefly, the focus on character, the key reason these films have succeeded where so many like them have failed. Chadwick Boseman is effortlessly excellent as T’Challa himself, bringing new shades of playfulness to the part he played so well in Civil War, and Michael B. Jordan also excels as Killmonger. He imbues the character with a potent blend of swaggering arrogance and haunting, wounded vulnerability, making for comfort-ably Marvel’s best villain since Loki and quite possibly its best overall.

It’s the women who really stand out, though. Danai Gurira plays Okoye, the leader of the Dora Milaje, with a winning combination of warrior ferocity and surpris-ing mischievousness, and needs her own action franchise yesterday; Lupita Nyong’o upends superhero love interest conventions as T’Challa’s ex-turned-spy Nakia; and Letitia Wright comes dangerously close to stealing the entire film as Princess Shuri, T’Challa’s smart-Alec little sister and equivalent of James Bond’s Q, who outfits him with gadgets, teases him mercilessly, and has almost all of the script’s best lines.

It’s not a perfect film, of course. While it manages to stand refreshingly apart from the rest of the Marvel Universe (there’s not an Infinity Stone in sight) it does nonetheless have some of the problems typical of these movies. There’s more than a little dodgy CGI, and while the action is generally quite good compared to most of these films – especially an extended fight sequence in a South Korean casino – the final fight leaves a lot to be desired, basically consisting of two people punching each other while wearing nearly-identical costumes and wielding nearly-identical powers.

This isn’t even close to enough to derail the film as a whole, though: this is exceptional stuff, top-tier Marvel easily worthy of standing along-side their greatest successes like the first Avengers and Guardians of the Galaxy. And that’s not even taking into account what it means for diversity and representation in the still overwhelmingly white superhero genre. Black Panther is a triumph, and here’s hoping we see many more of T’Challa’s adventures in the future, preferably with Coogler still at the helm. Wakanda forever!