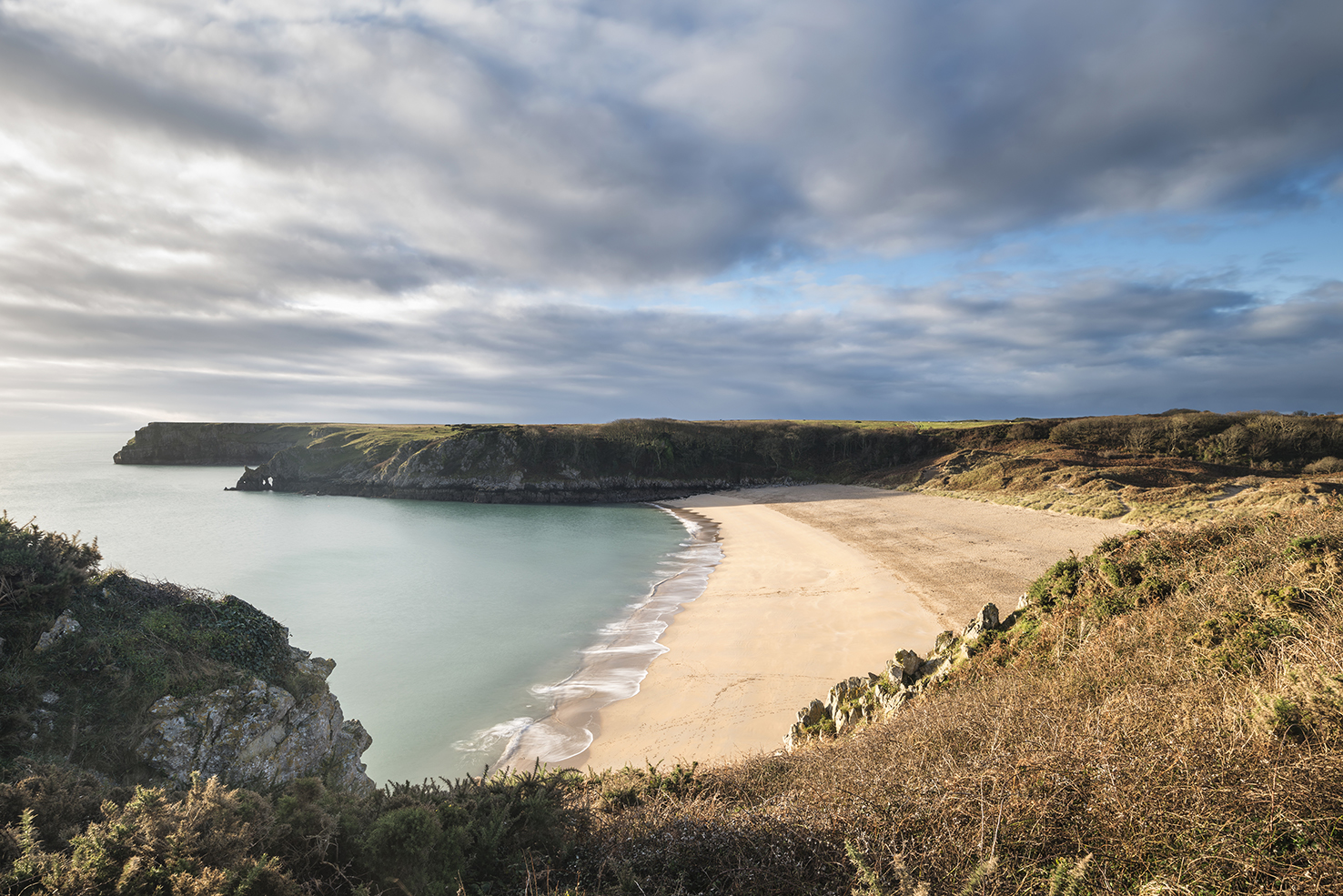 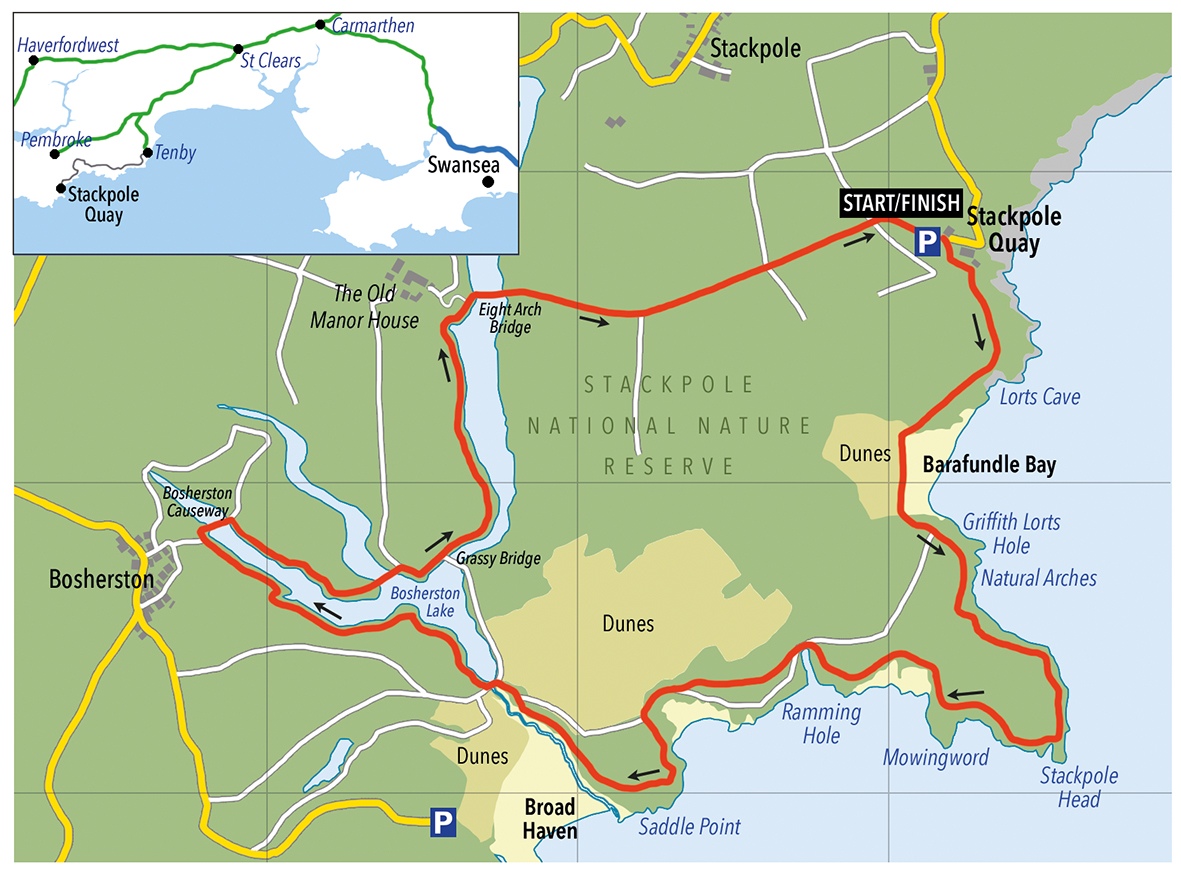 IAN HAS AN ABSOLUTE GEM OF A WALK FOR US THIS MONTH. IF YOU HAVE NEVER BEEN TO STACKPOLE QUAY YOU ARE IN FOR A REAL TREAT; THE ROCK FORMATIONS ARE QUITE SPECTACULAR.

By the time you read this, spring should have well and truly sprung and this horrible wet, cold and dark winter will finally be well and truly behind us. Whilst our wet winters are certainly a pain, I think it’s the contrast between the seasons that make them so special, and no more so than the transition from winter to spring. It’s because the winters in South Wales can be so awful that makes spring such a joy. Not wanting to go into cliché mode, but it’s a re-awakening, a re-birth, and a promise of a new start in both nature and indeed in us. And anyone with a modicum of interest in the great outdoors will recognise and enthusiastically welcome the first signs of spring; the Cheltenham Festival, quarter finals of the Champions League and the Swans swimming serenely away from the relegation zone (we hope). And by the time the Masters comes around, well, it’ll be in full swing. Oh yes, and daffodils of course. 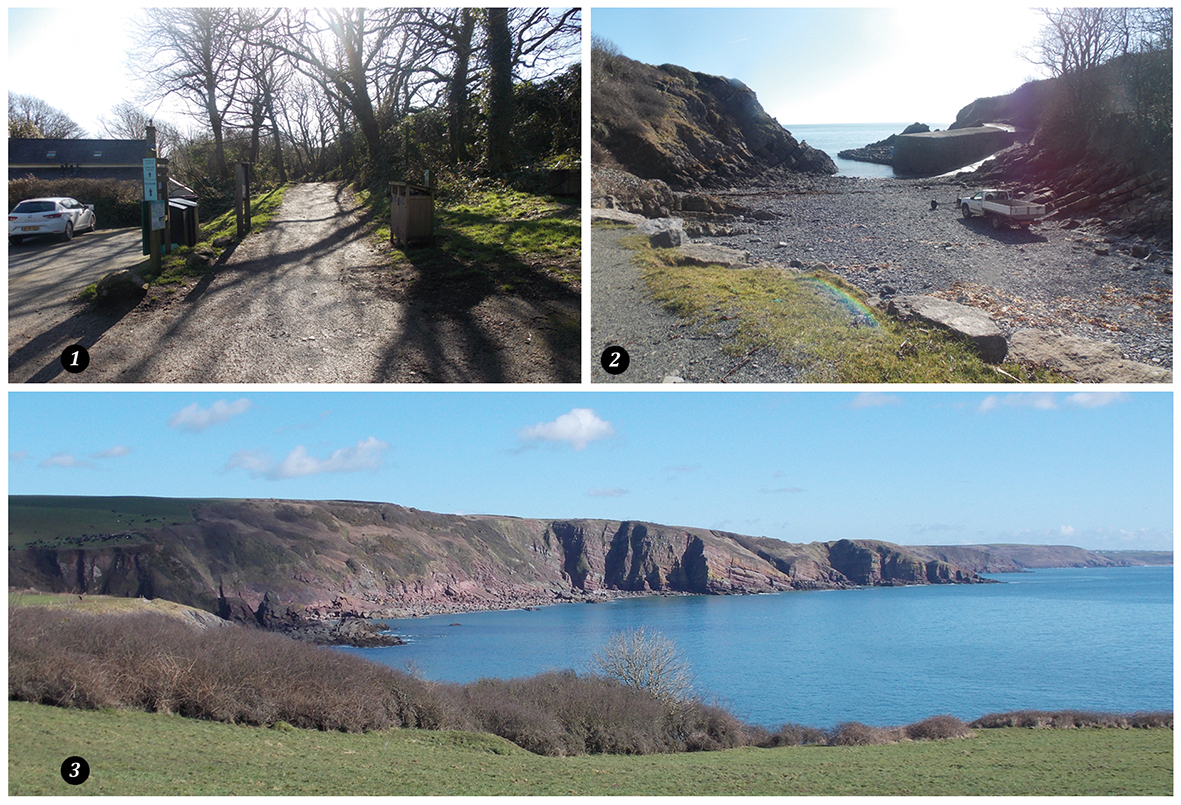 So I’m hoping that if you haven’t done any of my previous walks, then the lighter nights and milder temperatures may just be the motivation you need to try one now. This month’s walk is a request from one of my four readers – thought I’d better keep him sweet – and it’s a cracker. It takes us along the South Pembrokeshire coast from Stackpole Quay, to the lily ponds at Bosherston on the Stackpole Estate via beautiful rugged coastline and stunning bays. It’s a nice stroll (honestly), and will be suitable for children and pets alike, if the distance isn’t an issue. There aren’t any steep climbs, although the sheer cliffs can certainly present a danger, so be careful. Kids and dogs on leads. 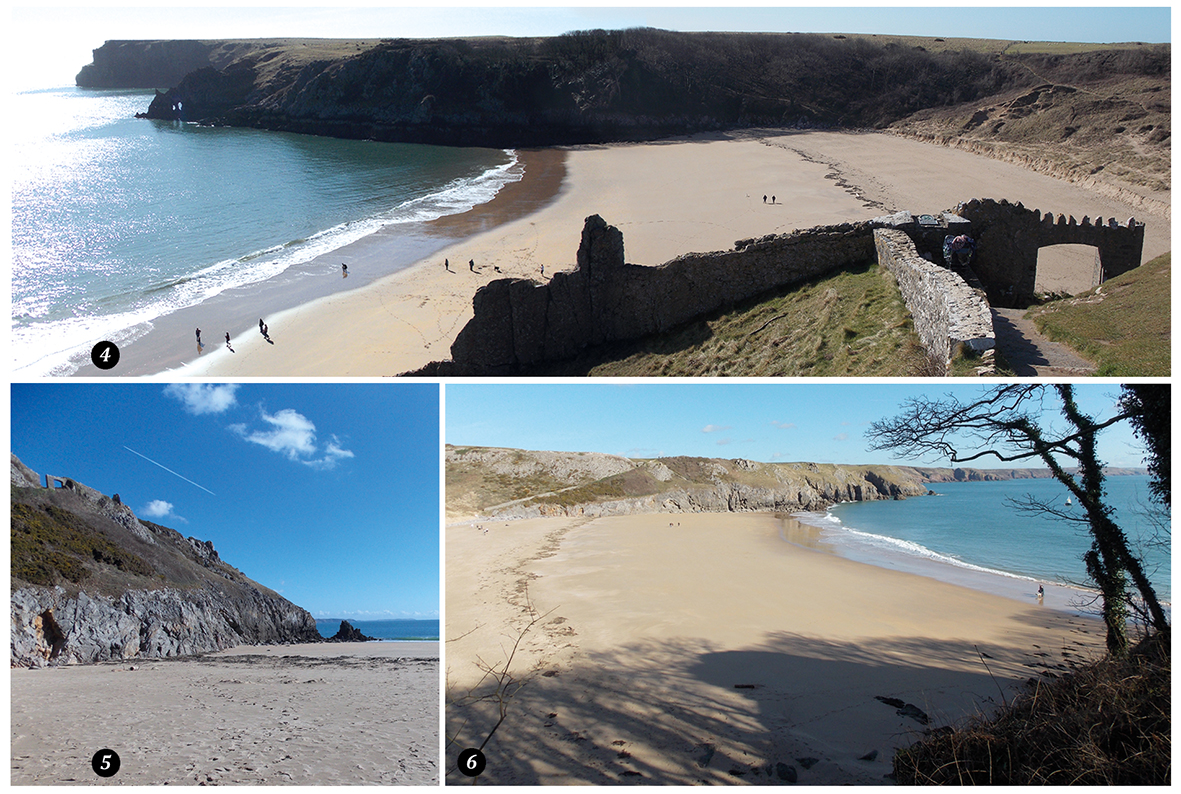 4. Barafundle Bay 5. On the beach looking back at the archway 6. Reaching the other side of the bay

The walk starts at The National Trust car park at Stackpole Quay, just south of Pembroke. There’s a £5 charge for all day parking which I suppose is a bit steep, but all in a good cause. Head to the right of the buildings at the bottom of the car park and follow signs to Barafundle to the right. Go up the steps which leads you into a field via a gate and you are immediately met by glorious views of the coastline to the east, all the way around to Caldey Island. On a clear day, Rhossili Down and Worms Head can also be seen in the distance. Carry on straight ahead for a little while and eventually the wonderful Barafundle Bay comes into view. It’s a beauty, fair play, and it’s often included in ‘best of‘ lists for beaches in the UK, Europe and indeed the world. Now, this secluded little gem wouldn’t look out of place on Gower, and it’s not surprising because the geology hereabouts is very similar – carboniferous limestone, that characteristic grey and angular rock found on much of South Gower. Its two symmetrical headlands at either end of the bay extend out like two welcoming arms saying to the sea, ‘Come on mun, come for a cwtch, it’s lovely by ‘ere…’ It’s small yet perfectly formed. The Felicity Kendall of beaches. Or should I say the Tom Cruise of bays. 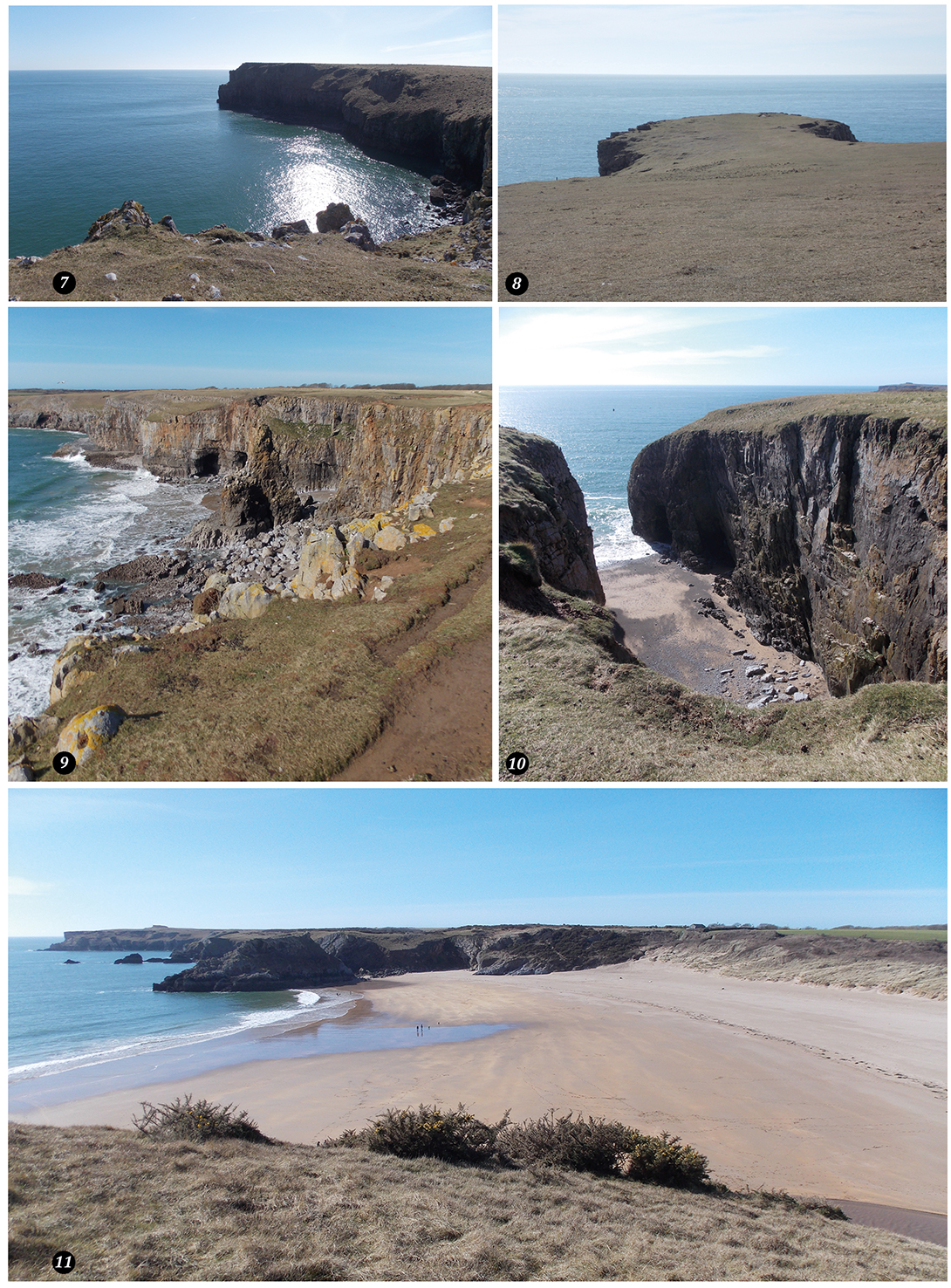 7,8,9. Spectacular coastal features as you follow the cliff path from Barafundle Bay to Broadhaven 10. The sheer cliffs of Ramming Hole 11. Broadhaven

Descend via an archway in the wall ahead and stroll across the beautiful sandy surface to the opposite side where you exit the beach via the path which wends its way up through the trees. Through the gate at the top and you’re now faced with a choice; follow the coastline to the left, or the shorter route going straight ahead cutting out the headland. (The paths will re-join). If you do elect the coast option then be very very careful. The cliffs are very steep, a little unstable and a bit scary, so don’t go too close to the edge. However, if you do take the short cut then you will be missing out on some spectacular coastal scenery. A physical geographer’s dreamland, the coast here has been eroded to bits by the constant battering of the waves, resulting in some spectacular features including narrow gorge like inlets and isolated rocky stacks cut off from the mainland. It’s all good stuff. Iolo would be wetting himself along here. 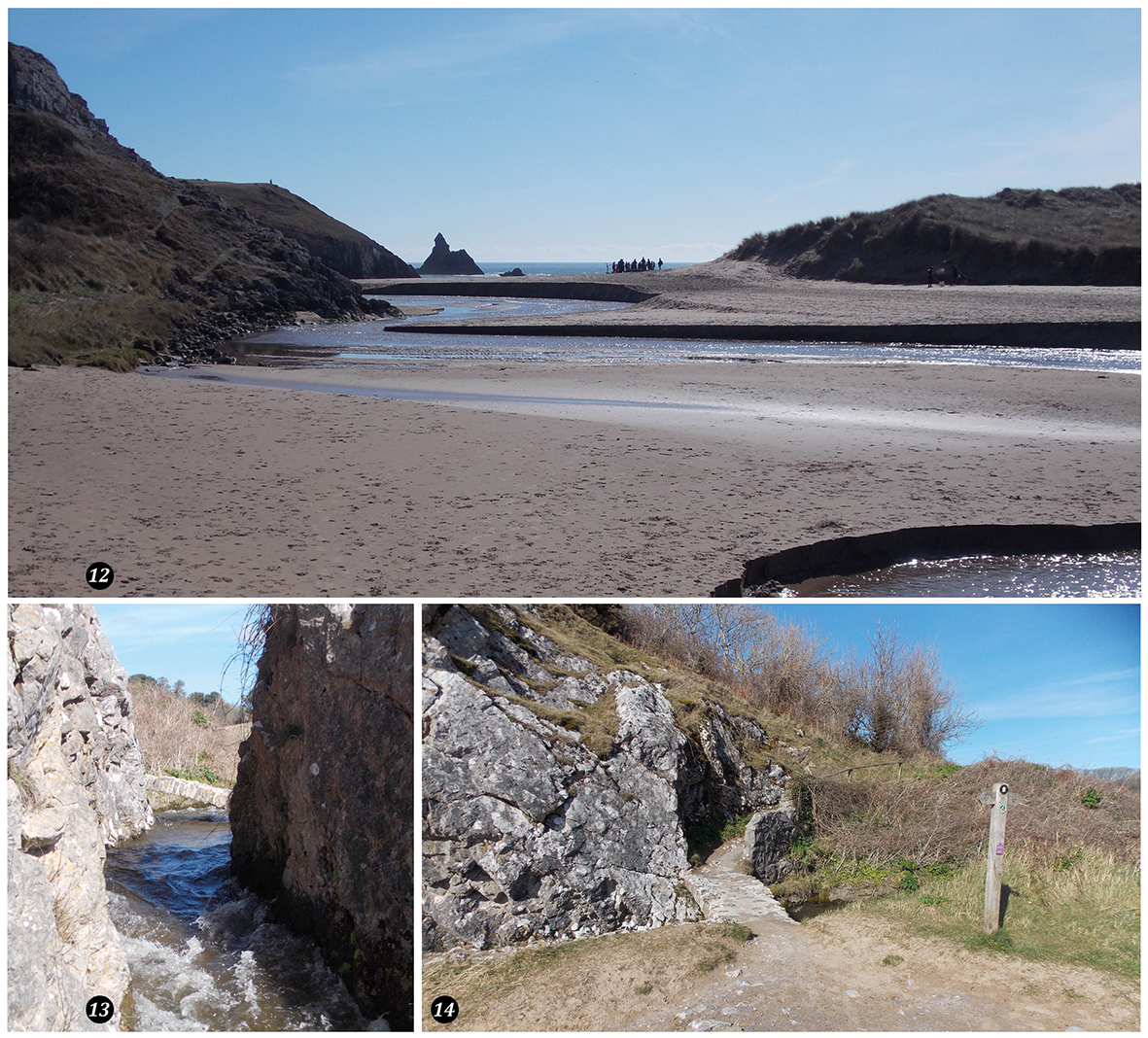 12. The stream that snakes to the ocean on Broadhaven 13 & 14. Your crossing point, the small stone bridge

Once you get over the excitement, you’ll then come to Broadhaven, an equally lovely bay, with a stream running along its edge giving it a passing resemblance to Three Cliffs. You can descend onto the beach but you’ll have to cross the stream to do so. The day I was there it was too deep for boots, although I could have taken them off (it wasn’t that deep, it was just too cold for paddling) so instead I headed for the dry stone wall which snakes up the dune to the right. Climb to the top keeping the wall to your right and then look for any path that descends down through the dunes heading towards a wooden bridge below which crosses the stream. Once that comes into sight, keep an eye out for your actual crossing point, a small stone bridge to the right.

So now you’ve entered Bosherston Lakes or Ponds, part of the Stackpole Estate, an area of tranquil wooded valleys and serenely calm lakes. And that’s exactly what you first notice about the place – how quiet and peaceful it all is, quite a contrast to the beach and the sounds of the sea. The history of the estate is well documented elsewhere if you choose to look and has experienced some turbulent times along the way. However, one thing worth noting is how the area gained its appearance. It was the result of a grand landscaping project in the 18th century by its owner the Earl of Cawdor, when the three natural valleys were deliberately flooded and millions of trees planted, a look which has pretty much survived to this day. It’s now a Nature Reserve and owned by the National Trust.

Follow the lakeside path and hopefully if you’ve timed it right, the lilies will be on show. I understand they start to flower in May but the best time to go is in June, so be sure to pick a nice day. The lakes are also rich in wildlife, including otters and various species of wildfowl and are well stocked with fish. In the summer time you’ll see dragonflies and damselflies. The ponds are also popular for fishing and when I was there I got chatting to a fisherman on the bank. He told me it was just coming to the end of the pike season and he was a little disappointed at not having caught one, which he put down to the level and murkiness of the water. I sympathised and as I was about to move on, I heard him mutter in frustration “Come on mun fish, where are you?” Quick as a flash I responded…… *drum roll*……“Don’t tell him Pike!!” (*Punches the air* Yess!!! Back of the net!!). Suffice to say, I’ve been waiting to use that line for years. Thank you Mr Fisherman. (I’m just waiting for the opportunity to fall through the opening hatch of a bar counter and my life will be complete)

As the path continues along the banks of the lake, glory in all the nature around you with a backdrop of the gently reassuring glooping sound of the water as it laps up against the banks. The path will lead you to a stone causeway but if you like, you can make a quick detour left to have a look at the village of Bosherston with its pretty cottages and church. When you do cross the bridge you’ll be on the opposite bank. Cross a second causeway and after a short distance and around the corner you’ll come to a bridge, which also happens to be a dam. Don’t cross it but carry straight on, when presently an arched bridge comes into view. Cross this and you’re now on the home stretch. Keep on the well defined track, over open farmland, until you arrive back at the car park. £5 well spent.

If you think 7 miles is too much for you or your children, then you have the option of parking in say Bosherston or Stackpole which are closer to the lakes and just pootling around the estate from there.

OS map: OL 36 – although guides are available from the cafe at the car park

Distance: Between 6 and 8 miles depending on your choice of route

Children friendly: Yes – if the distance isn’t a problem

Refreshments: Cafe at Stackpole Quay and pubs in Bosherston and Stackpole

Buffalo Springfield: For What it’s Worth

Yes: Close to the Edge

The Who: Pictures of Lily

Emerson Lake and Palmer: From the Beginning