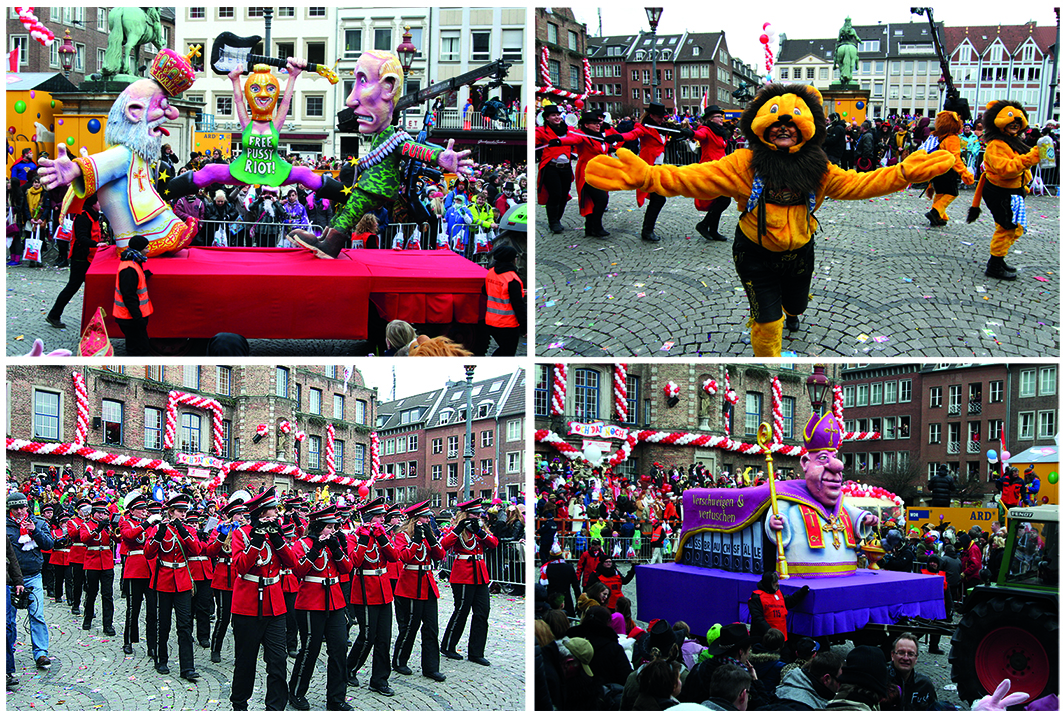 OF KARNEVAL AND KRAFTWERK

In the streets outside Dusseldorf Hauptbahnhof (its main train station,) a team of American footballers knock about amiably and teens in knee-highs huddle together against the cold as a couple in loud suits head off into the night.

Turning on the television in my room at the near-by Hotel Friends, a woman dressed convincingly as Gollum sneaks into a variety show wherein fake news is denounced and white socks with sandals are celebrated.

Dusseldorf feels like an utterly surreal place on my third visit, immersed, as it is in Karneval.

I wonder if I will fall under its spell.

A four-strong press trip ranging from the sublime to the cor blimey starts the next morning with some virtual reality, taking the headset wearer into a graffiti-adorned underpass now out of bounds to the public. 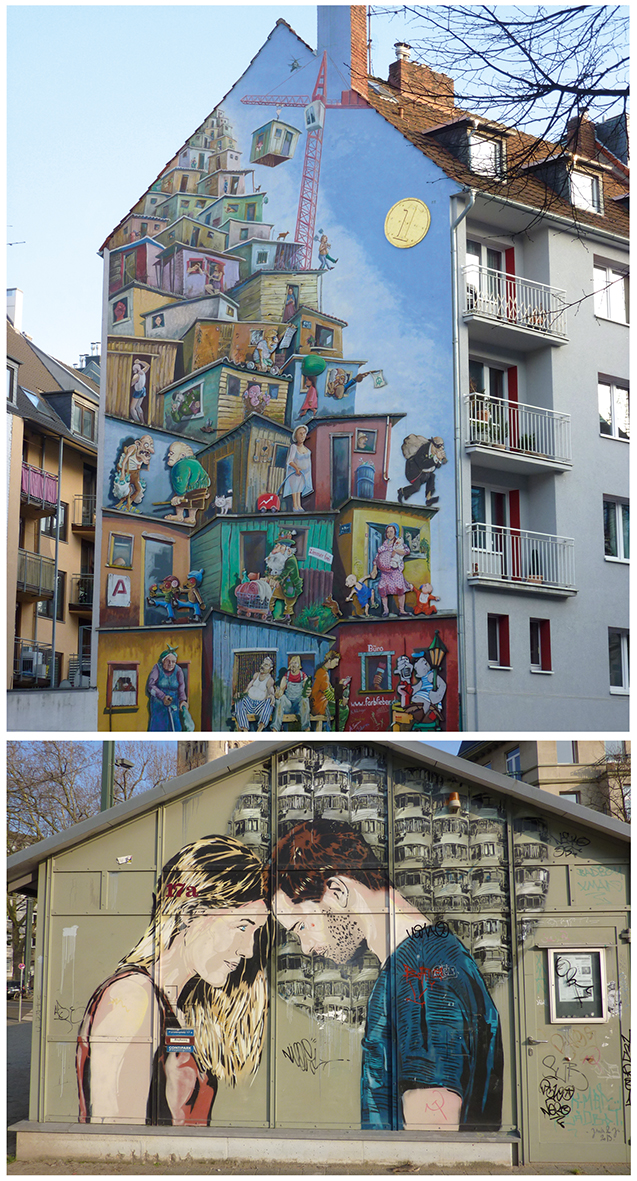 After lunch, we get to experience the real thing exploring the city’s absorbing urban art (see pics right). Massive murals are dotted regularly from Mintropplatz to Bilk before we end up at guide Klaus Rosskothen’s Pretty Portal gallery.

There we meet Katja Stuben to tour the city’s underground line, where six stations, free of advertising, showcase the work of contemporary artists, the highlight being film of outer space supplied by NASA.

A thirst worked up, we take an altbier safari, or pub crawl, around Dusseldorf’s Altstadt (AKA the World’s Largest Bar) sampling its top-fermented beer.

Saturday morning starts with a walking tour. Our guide, James, points out Japanese restaurant Na Ni Wa with its outside bench where people wait to enter, the city having a sizeable Japanese com-munity. Prussia and Japan established diplomatic relations 150 years ago. Dusseldorf is known as the desk of the Ruhr Valley, the administration and paperwork for its steel production being carried out here, German steel being sent to Japan for post-World War Two reconstruction.

James shortly shows us a display relating to artefacts unearthed during building work in recent decades, including a replica of a mammoth tusk discovered in August 2012. Weighing 34kg, it measured 1.2m and is 10,000 years old.

We soon arrive at Konigsallee (King’s Alley,) given the name in 1851 to placate the King of Prussia after he had had manure thrown at him when passing through Dusseldorf (after visiting Cologne) three years earlier. 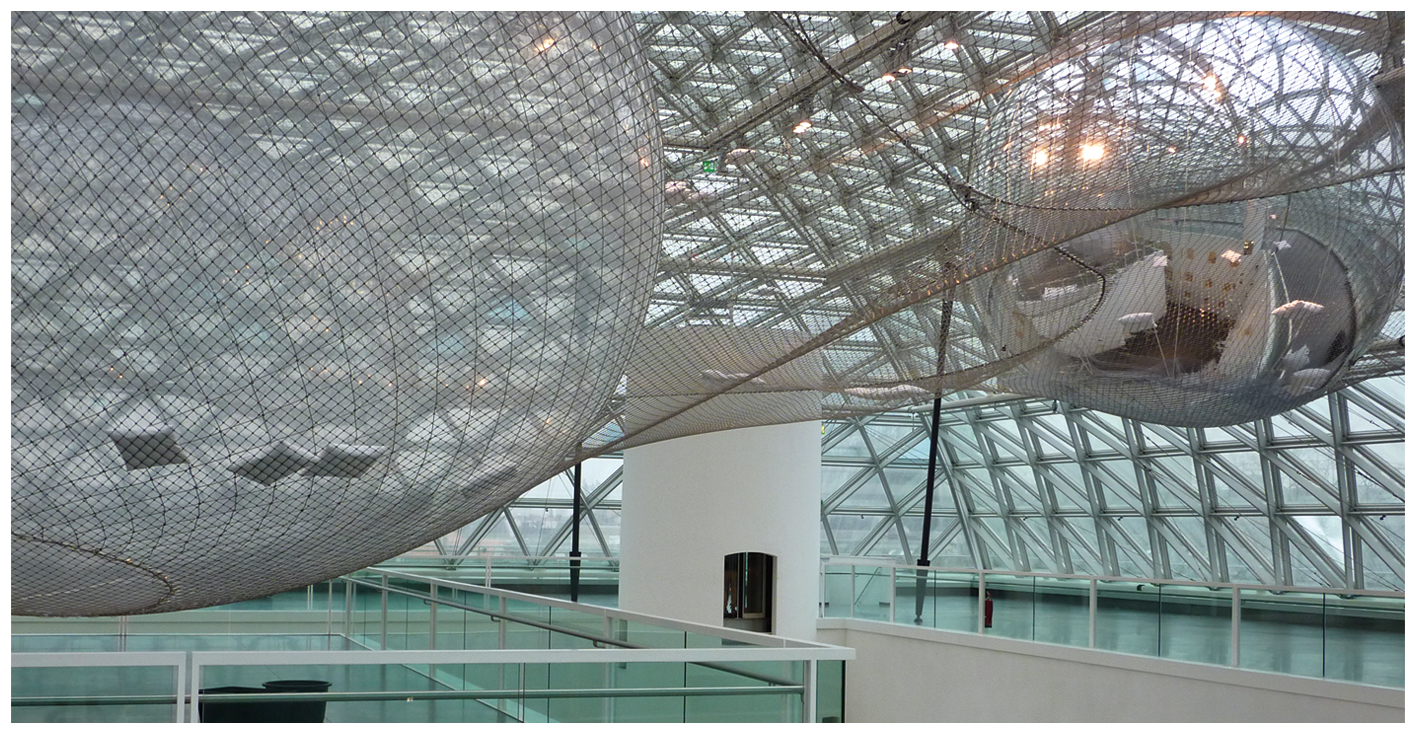 We see the department store bombed through its roof during the war, then mosey through a mustard museum with its appetising range of samples. 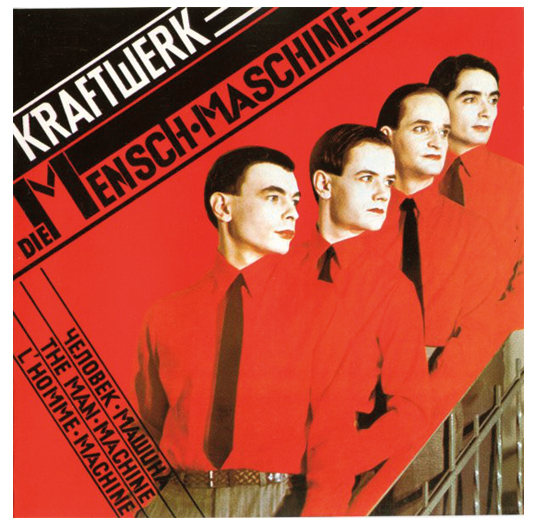 Art gallery K21 has Tomas Saraceno’s In Orbit spheres (see pic above) suspended via netting at ceiling height. Visitors are ordinarily able to walk on this netting, but refurbishment prevents this at the time of our visit.

The evening’s walking tour, in the footsteps of seminal synth act Kraftwerk is with musician Rudiger Esch. We start at the Mannesmann-Hochhaus skyscraper designed by the father of Kraftwerk founder member Florian Schneider – it’s easy to see how it shaped the band’s futuristic sound. This month, its 21st floor will stage a three-day celebration of the 40th anniversary of Kraftwerk’s The Man-Machine album (right).

En route to the premises of the former Kling Klang Studio we pass near to the site of the one-time communal Kraftwerk flat on Berger Allee.

The tour’s undoubted must-do, sees us recreate a Trans Europe Express promotional photo on the Hauptbahnhof’s 17th platform. On a personal level, I am delighted to discover Rudiger is a friend and former band mate of Ralf Dorper, once of Propaganda, whose A Secret Wish album remains among my favourites. I ask Rudiger to thank Ralf for his work. Petrolheads will remem-ber Propaganda’s Duel/Jewel as the BBC’s Rally Report theme.

Sunday starts with a stroll through Dusseldorf’s rebuilt dockland, in the vein of Canary Wharf and Salford Quays (Trivago’s new HQ is taking shape, Frank Gehry’s buildings are already here) before we take a lift to the top of the 240m Rhine Tower, from where the city and its environs can be viewed.

The afternoon is ours, so I head for Konigsallee’s street carnival, wherein thousands of locals promenade in the most amazing, eye-catching attire. By this time Karneval has won me over, and, bizarrely, I feel a bit of a weirdo walking around in civvies.

At last, come Monday morning we gather at the Hotel Friends foyer to get our outfits, a natty, psychedelic waistcoat and green hat ensemble (think Acker Bilk on acid) topped off with Harold Lloyd glasses. The transformation is something out of Mr Benn, and we step out into the Dusseldorf morning ready to revel.

Arriving at the Karneval’s start, we find our float, a truly spectacular number celebrating the city’s musical heritage via Kraftwerk, Clara and Robert Schumann and punk band Die Toten Hosen.

We are float 58 out of 70, and as we watch others set off we are passed by Angela Merkel, Theresa May (bringing into the world a grotesquely deformed Brexit,) and Donald Trump.

Cries of ‘Helau!’ bounce back and forth between those on floats and those watching, the exception being when those on a float representing the Jewish community (reported as a first for the Dusseldorf Carnival) exclaim, ‘Shalom!’ to the delight and amusement of all.

I begin to see the appeal of carnival – it is a continuous, joyous mood, like the collective euphoria experienced after a sporting victory, generated without establishing winners and losers. Somehow, our very coming together as a community has created this intoxicating high.

After over an hour of catching the Lion Bars, KitKats and crisps thrown from passing floats we board ours, with the warning to not throw all our sherbets and popcorn at once, but to pace our-selves over the procession’s duration. We seem to show admirable restraint.

As we weave through the city’s streets, children at the front of the crowd hold up hats or bags for booty to be dropped into. This is trick-or-treating on an industrial scale, and I feel like Willie Wonka making people happy, young ones beaming back and, often, their parents giving a thumbs-up. The connection is massive, engaging and quite addictive, the air full of frenzied, ecstatic cheering. Our sacks of goodies include Dusseldorf Tourism Office napkins, which can be thrown through upper storey windows to adults enjoying their own partying, a successful catch getting applause.

Nearing Town Hall, we are told the television cameras will be on us, so must be extra generous and smile as much as possible. The sweets rain down as we grin like idiots. Our ammo lasts until the procession’s final minutes, when we resort to shrugging our shoulders at any disappointed children.

There’s still fun to be had though, and I exchange pretend gunfire with a highwayman, praise steampunks, a unicorn and Harley Quinn on their outfits, dance from afar with various yummy mummies and wave like Hilary Clinton at a distant individual after making eye contact. It’s not remotely British; it’s all very Dusseldorfian.