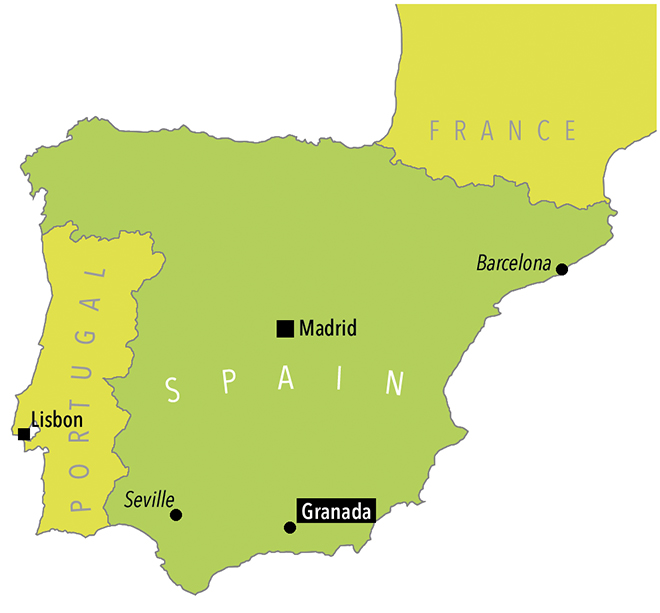 A couple of years ago I travelled to Granada, in Andalusia, Spain with my sister with the specific aim of visiting the Alhambra. We were there in March when there was snow on the ground and the gardens were bare, so I was delighted to see Liz Barry’s pictures where the plants are in bloom and the sun is shining. Lesley 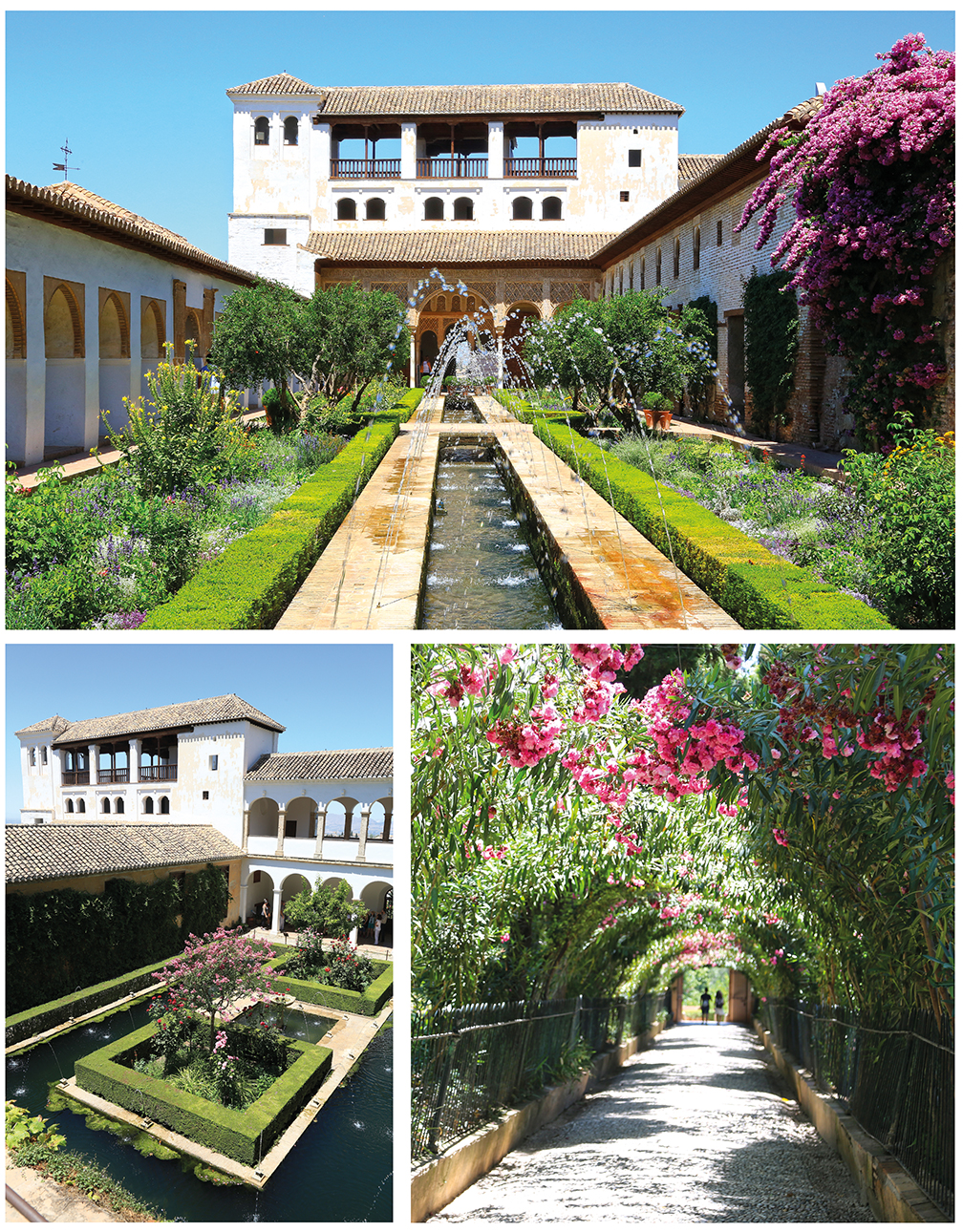 Gardens of the Generalife

Granada is situated at the foot of the Sierra Nevada Mountains and on a hill top over-looking the city stands the magnificent Alhambra, a fortress dating back to the 9th century.

In 1333 it was converted to a royal palace for Yusuf I, the Sultan of Granada and by the late 15th century it was the Royal Court of Ferdinand and Isabella who are probably best known for inaugurating the explorations to the New World. It was at the Alhambra that Christopher Columbus received his royal endorsement for his voyage to America.

During the 1800s it was occupied by Napoleon’s troops who used it as barracks. Unfortunately some of the structure sustained damage when it was used for target practice, later it saw further decline as it became a refuge for thieves and beggars. In 1984 UNESCO included the Alhambra on the World Heritage List, today the Red Castle or qa’lat al-Hamra as it is called in Arabic, is Spain’s most visited monument attracting over two million visitors a year.

Within the complex, to the east of the Alhambra lie the beautiful gardens of the Generalife, which is often said to have been the summer residence of the Emirs who ruled this area of Spain during the 13th and 14th centuries. In fact this attractive villa was a hunting lodge to which the rulers withdrew seeking relief from the heat amidst the shade of the secluded patios. The main courtyard, the Patio de la Acequia – courtyard of the water channel, takes your breath away as each arched window offers a view of cascading arcs of iridescent water over floral borders with a palette of pink and mauve.

Visitors wander through avenues of tall dark green cypress trees to explore this medieval retreat and pleasure gardens. Water channels that run down steps, lead to secluded corners with stone benches that provide respite from the fierce afternoon heat. Here the sound of running water mingles with the chirping of bird song. The sensuous perfume of summer flowers fills the air from the voluptuous heads of multi-coloured roses and oleander.

Pics left top to bottom: Arches in Islamic (Moorish) style / Chamber of Ambassadors also known as the throne room / Mocarabe ceiling in the Hall of the Two Sisters. Main pic right: Court of the Myrtles, named for the myrtle bushes that surround the central pool, which acts as a mirror reflecting the structure of the building.

At the heart of the Alhambra within the Nasrid Palace you will find the recently renovated Patio de los Leones (Court of the Lions): the clue is in the title, at its centre stands a fountain where water spouts from the mouths of twelve lions. This is further evidence of the moors’ inherent fascination with water. The courtyard is enclosed by four separate halls which showcase the elaborate Islamic filigree decoration mocárabes, a mixture of intricate geometrical and abstract patterns which cover archways and ceiling.

One of the halls off the courtyard is the Hall of Two Sisters; named after the two large white marble flagstones that are part of the floor, though it is the honeycomb vaulted domed ceiling overhead that is the most impressive feature with a central star and 5000 tiny cells, hanging down like stalactites. 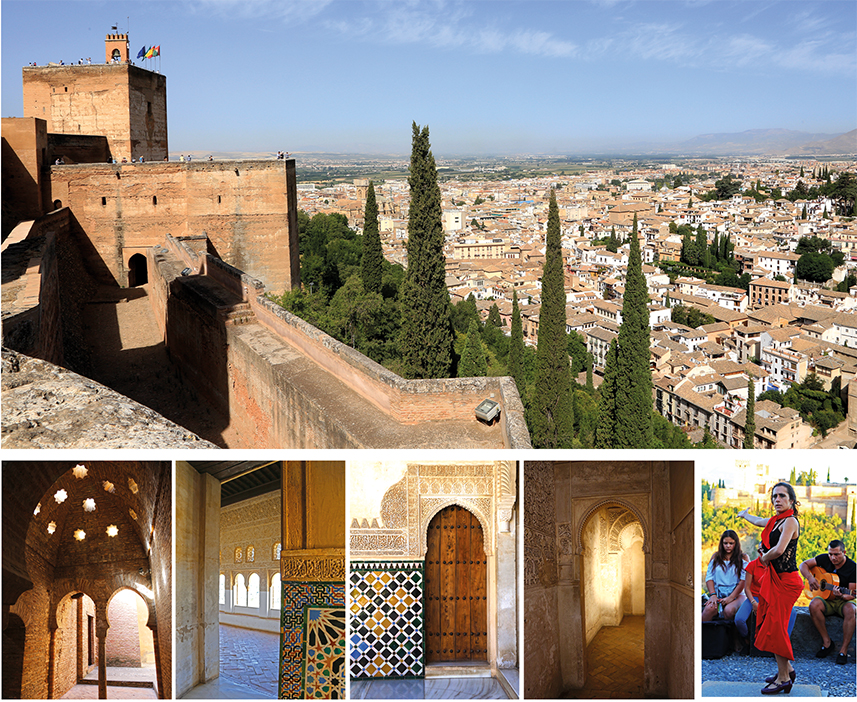 Standing on the platform at the top of the Torre de la Vela (Watch tower) the site of the original ancient 13th century citadel, you have an uninterrupted view of the modern town, and beyond to the traditional pretty white houses of the Albaycin neighbourhood clinging to the adjacent hillside.

Albaycin is an historic district of Granada, with narrow cobblestone streets and the square Mirador de San Nicolas. This is the place to capture the perfect photo of the Alhambra especially later in the day, as the red stone of the Palace glows at sunset against the cool backdrop of the Sierra Nevada Mountains.

You won’t be alone though as a vibrant party atmosphere takes over the gathering of tourists, students, buskers and of course Flamenco dancers.

Advance tickets to visit the Alhambra can be bought through www.alhambragranada.org