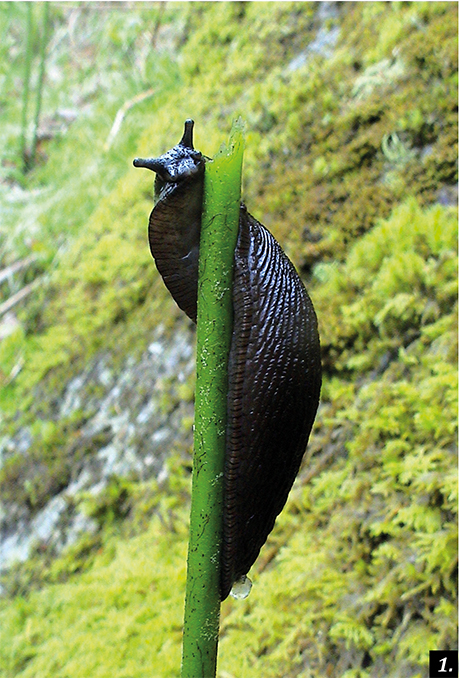 As the growing season is getting into full swing, it is not only the much longed-for leaves and flowers that are making a comeback. Hot on their heels are some of the plants’ worst enemies, and they are just as set upon growing and reproducing as quickly as possible, taking advantage of the lush new growth. Probably the most successful and familiar of these are the almost universally detested slugs. They are so unpopular that they are not usually considered worthy of a second look, yet under cover of darkness slugs lead fascinating secret lives, with some species performing spellbinding mating rituals too complicated even for the Kama Sutra.

The gluttonous appetites of a few common species easily distract from the fact that many of the approximately 45 different species of slug known to occur in Britain actually have little or no interest in garden plants or crops. Some feed on algae and lichens, others prefer fungi, rotting vegetation and carrion, and a few are even active predators.

While some species actively avoid areas of human activity, many others simply get overlooked. It is quite possible for a suburban garden to be home to almost a dozen different slug species, while the resident gardener believes there to be only one or two. Several species are rather similar in appearance and are easily mistaken for one another, while others are secretive and can only be spotted late at night or if they are disturbed in their hiding places.

Probably the most frequently encountered slugs are members of the genus Arion in the family Arionidae. 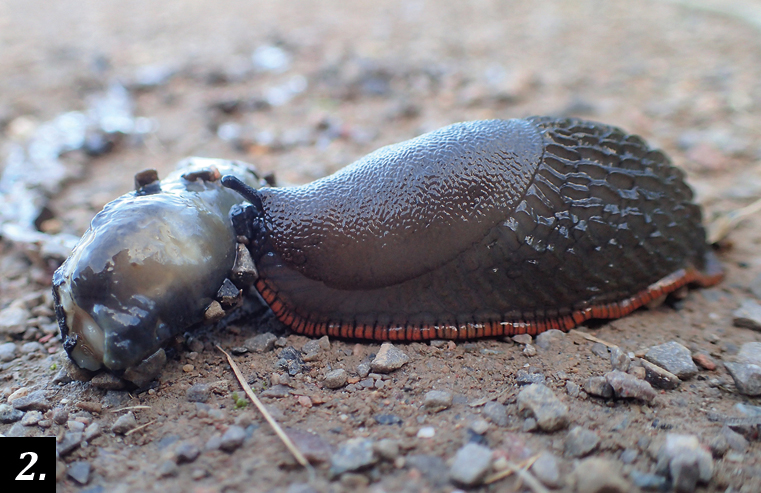 17 different species of Arion are known to occur in Britain, which includes four of the largest resident slug species. Probably the most common of these four very similar looking large Arion species is the native Large Black Slug (Arion ater) (photo 1). This species often starts its life an ethereal shade of ivory and only later takes on its adult colouration, which – despite its name – can be any shade from beige to a beautifully rich jet-black. The Large Black Slug is still regularly seen in Britain, but in many parts of continental Europe it has been outcompeted by the invasive Vulgar Slug (Arion vulgaris) from southern Europe. The Vulgar Slug has also been widely record-ed in Britain, but so far seems to be coexisting with the native species. The Vulgar slug is very similar in appearance to the Large Black Slug (and also the Large Red Slug (Arion rufus)), and is nearly as variable in colour, ranging from pale yellow to black, but is most often a reddish-brown, with juveniles sporting distinctive bands. Large Black Slugs rock from side to side when touched, something Vulgar Slugs never do. In order to tell the species apart with absolute certainty, however, dissection and detailed examination of the reproductive organs is generally necessary. The same applies to a number of the small and medium-sized Arion species many of which, on cursory examination, appear very similar to each other, and can also superficially resemble juveniles of the larger species.

Besides sharing most of our tastes as far as living plant material goes, many species of the genus Arion are also partial to foods less appetising to humans, such as carrion (including dead conspecifics, as demonstrated by the individual in (photo 2), and even excrement (particularly that of carnivores). 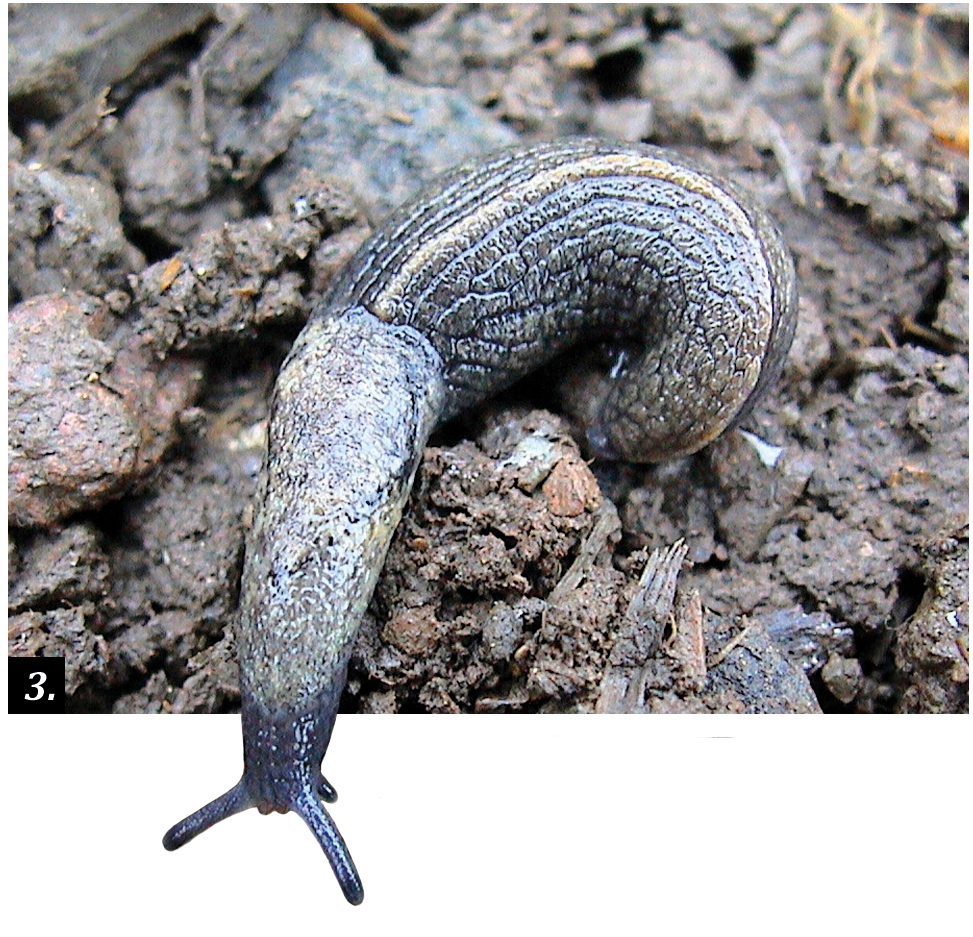 Even more of a problem to growers are some of the dainty and rather innocent looking members of the genus Deroceras in the family Agriolimacidae, particularly the Netted Field Slug (Deroceras reticulatum). This small species, which reaches a maximum length of 50 mm, is one of the most serious plant pests in Europe, attacking a wide range of plants both above and below ground. In Britain it can breed year-round, with each individual capable of laying up to 700 eggs in a lifetime. Like most slugs, the Netted Field Slug is a hermaphrodite and possesses both male and female reproductive organs. Netted Field Slugs can and do mate, but they are able to self-fertilize if no partner can be found, so a new population can potentially be founded by the introduction of just a single egg. When a Netted Field Slug encounters a prospective mate, the often lengthy courtship involves mutual touching with mouths and antennae as well as elaborate circling while touching each other with a special organ known as the sarcobelum (photo 4), before a tight yin-yang position is assumed during which both individuals’ penes are everted and sperm transfer takes place (photo 5). 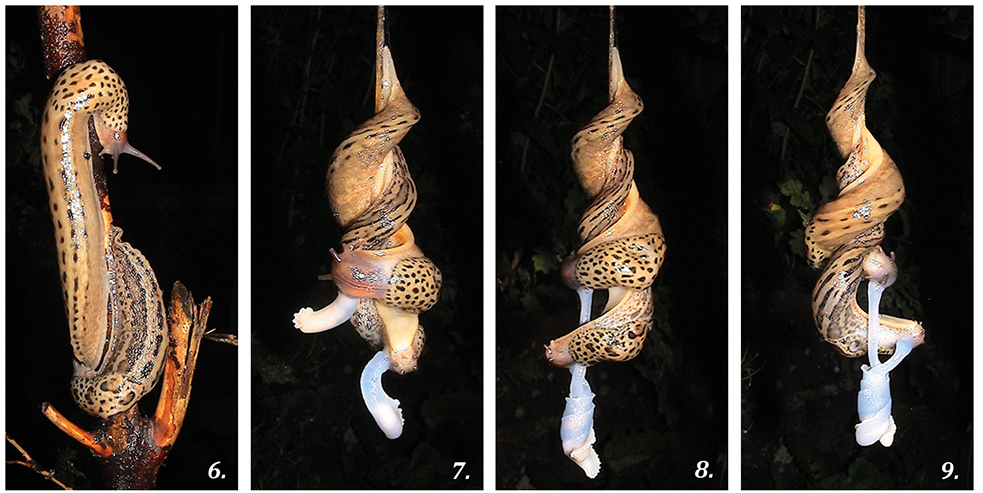 Courtship and mating follows a similar pattern in many other slugs species, but the beautiful and charismatic Leopard Slug (Limax maximus) in the family Limacidae, goes one step further. In this species the partners follow one another up a tree or a similar vertical structure (photo 6), where they circle and form a sturdy rope of mucus up to 40 cm in length along which they lower themselves, their bodies wrapped tightly around each other. Hanging upside down, they evert (photo 7) and carefully entwine (photos 8 & 9) their penes. As in other slugs, these are always located on the right hand side of the animal, just behind the head. As mating progresses, the penes fan out and take on a 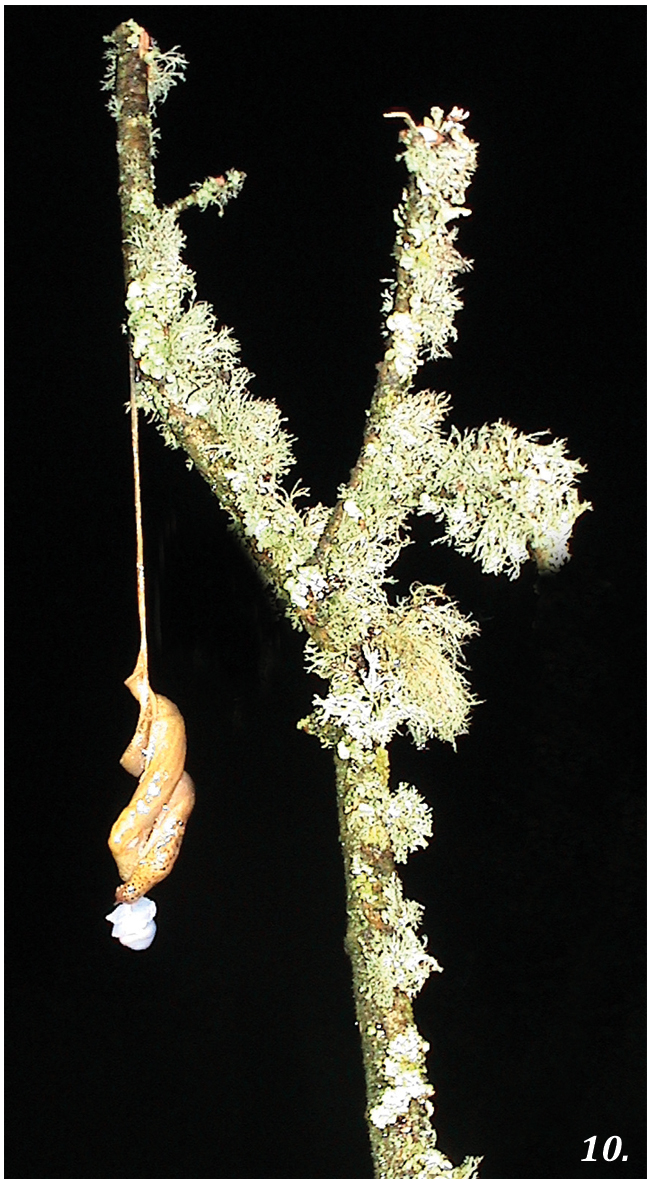 flower-like appearance (photos 10 & 11). It is at this stage that sperm transfer takes place. Once mating is complete, either one partner drops to the ground while the other makes its way back up the mucus rope, often eating it in the process, or both partners return the way they came. It appears as if they may be aware of their distance from the ground, choosing not to let themselves drop if they find themselves at too great a height. 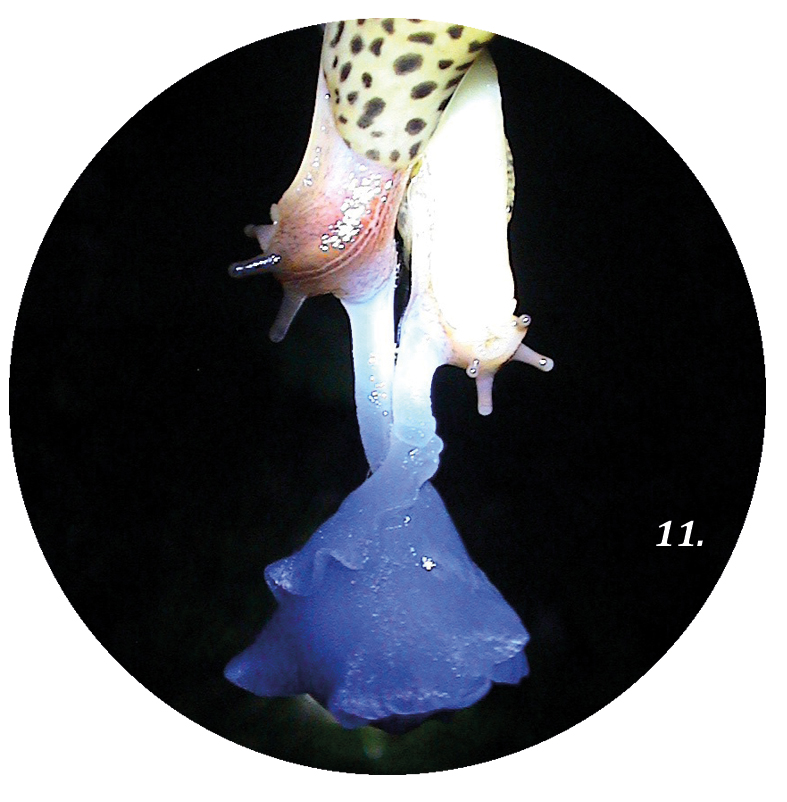 Leopard Slugs are unusual in other ways too: they can live for a number of years and have been shown to be capable of some learning and of developing food preferences, and they are also known to possess a very well developed homing ability. Like most of the other members of the family Limacidae, Leopard Slugs are omnivores with a preference for dead and decaying organic matter, and so do not usually cause any problems for gardeners or farmers. On the contrary, since Leopard Slugs readily feed on the egg masses of other slugs and occasionally even prey on adults, it is generally beneficial for growers to have them on their patch. 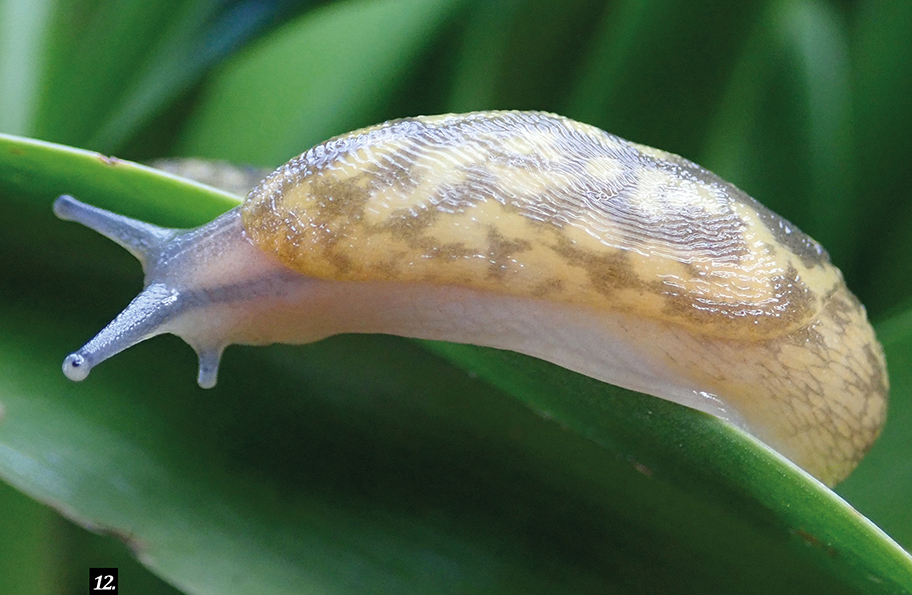 Another commonly seen member of the Limacidae is the Green Cellar Slug (Limacus maculatus) (photo 12), which often takes up residence in compost bins where it finds perfect living conditions, since it, like the Leopard Slug, has a fondness for dead plant material and is active only under cover of darkness. 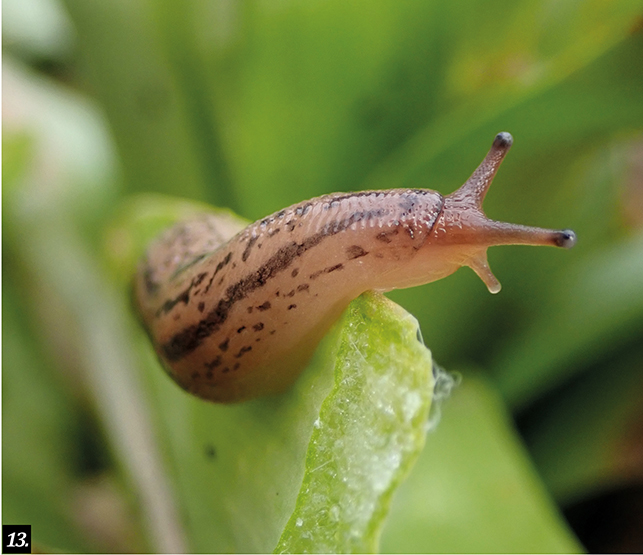 A relatively recent addition to the British slug fauna, which was first recorded surviving outside of green-houses about 40 years ago and has since been spreading quite rapidly across the country, is the small and – especially as a juvenile – very attractively patterned Iberian Threeband Slug (Ambigolimax valentianus) (photo 13). Compared to other members of the Limacidae, the Iberian Threeband Slug is somewhat more prone to feeding on live vegetation, especially in the absence of other food sources, and has been known to cause some damage in green-houses. Outdoors, it seems to have a particular fondness for scattered wild bird seed. 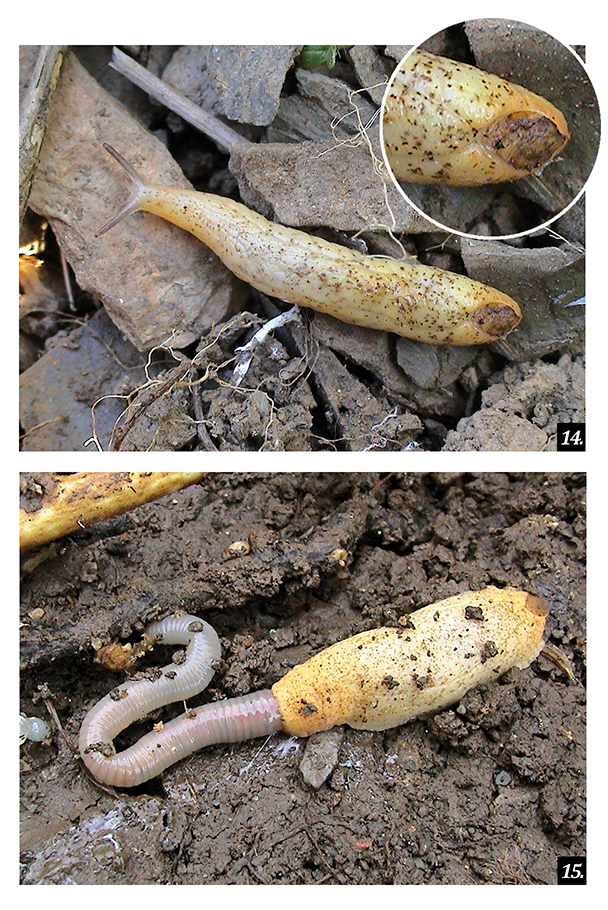 Evolutionarily, slugs are snails which have lost their shells. While in most members of the Arionidae the shell has disappeared almost without a trace, members of the Milacidae, the Agriolimacidae and the Limacidae all still possess a small internal oval shell plate in their backs. The rather oddly-shaped members of the family Testacellidae even possess a tiny external shell remnant on their rear ends, and are easily identified by this feature. There are only four British species of Testacellidae, all of which spend their entire lives underground, and so are rarely encountered. Three of the species, including the Orange Shelled Slug (Testacella scutulum) (photo 14), are pale in colour, while the fourth species (Testacella maugei) is greyish-brown. The Testacellidae are the only British slugs that are exclusively predatory, feeding on other invertebrates, particularly earthworms. They have specially adapted sharp teeth that allow them to hang on to their slippery prey even if it tries to withdraw with some force, as earthworms are prone to do, and they are able to overcome and swallow surprisingly large prey items (photo 15).

Slugs as a group are woefully understudied, and it seems that their lack of popular appeal even extends to the committees responsible for the distribution of research grants. As a result, much still remains to be discovered about many aspects of slug biology. Fortunately, a recent project undertaken at Amgueddfa Cymru – National Museum Wales in Cardiff has been able to provide many new insights into the British slug fauna and has culminated in the production of a beautiful, illustrated field guide (‘Slugs of Britain and Ireland – identification, understanding and control’).

Hopefully, publications such as this will help to swell the numbers of those who appreciate the wonder and mystery surrounding these intriguing animals capable of scaling vertical surfaces without legs, able to survive losing as much as 80% of their body weight through dehydration, and which are managing to thrive in environments heavily modified by humans and notoriously unconducive to wildlife (and what is more, even doing so in spite of vigorous efforts to eradicate them).

Details of his work including a gallery of his artwork can be found on www.johnwalters.co.uk