At Caswell Bay on a beautiful morning in early April I watched as two men went swimming. The surfers in the sea were wet-suited; the two swimmers were in their bathers. I shivered and said to Grand-daughter, ‘Look at those men! They must be crazy!’

Then I remembered how every spring as soon as the sun began to feel warm the teenage me and Maggi, my best friend, would be in the sea. So cold it would literally take our breath away as we went under. But it was a matter of principle: if the sun was shining we should be in the sea.

As a young child I’d stay in the sea until my legs were blue and my teeth chattering. ‘It’s l-l-lovely,’ I’d stutter to my mother. ‘Why don’t you c-c-come in?’

These days I understand her reluctance. Is it that we feel the cold more as we age or are we simply less stupid? That said I am braver these days than I was a few years ago and I will go in the sea in less than perfect weather conditions.

Maggi still swims most days during the summer and long into the autumn. I’m not that brave though there’s part of me that wishes I had the inclination to do it. The same part of me that argues, ‘make time,’ when I say I don’t have time for it. Because that’s what life’s for, isn’t it? Living it to the full – not just getting by, but being open to adventure, change, even risk.

I’ve spent so much of my life being timid, not daring to take chances or even speak up but I’m trying to do things differently now. I finally understand what Jesus meant when he said he had come so that we could live life to the full. That will mean different things to different people but to me it means appreciating this life and making the most of it. And not always worrying about what other people might think

Shall I tell you a secret? A few years ago Husband and I were on holiday in West Wales in June around the time of our anniversary. On the day itself we walked the coastal path. The sky was cloudy and grey and there were very few other walkers. Suddenly I had a brilliant idea. ‘Let’s go skinny-dipping to celebrate!’ 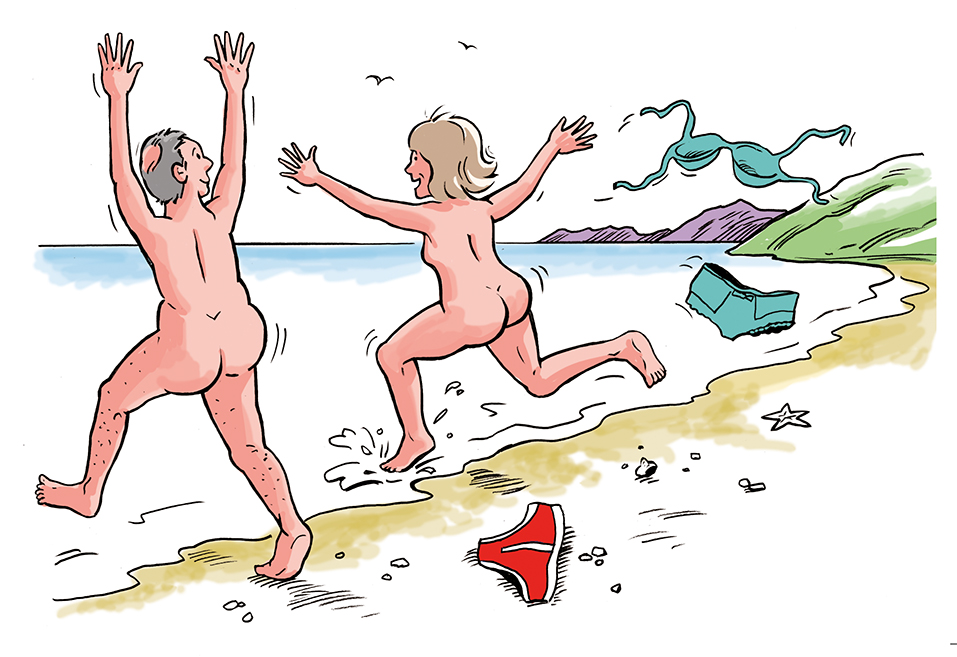 Husband gave me that ‘really?’ look and carried on walking thinking I’d give up on the idea. I didn’t. ‘That bit of cove is very sheltered and from up here we can see that there’s no-one around for miles.’

Actually he didn’t need that much persuading and it was a very quick dip. It would have been better if we’d had towels of course …

Reading all this you might think I’ve got this living life to the full thing sussed. Let me assure you I haven’t but I want to be braver; I want to try things.

Some people seem to have the idea that Christianity is all about stopping us having fun. On the contrary, the only things we’re advised to stop are those that will hurt others (or ourselves).

At a bible study in Zac’s place recently we were talking about the character of God. One woman told us she’d grown up thinking God was always waiting for her to make a mistake and that he’d be angry with her and punish her. This is what she’d learned at church.

But everything I read about Jesus tells me a different story. He is on the side of the out-sider. He is a protector for the weak. He is an encourager. That’s why I think it’s so important that he said what he did about living life to the full.

Life’s not just an interlude on our way to heaven, something we have to get through before we get our reward. At least that’s not the way Jesus looked at it.

I recently visited Folly Farm with my eighteen-month-old grandchild. He doesn’t watch television so has only seen pictures in books of penguins, giraffes, lions, lizards and all the rest. The look on his face as he discovered them all in real life was precious. Everything was new and fresh to him and through his eyes I was able to be stunned by the intricate arrangement of stripes on a zebra’s face.

With all the bad news in the world maybe it’s time to start being brave, amazed, excited and awed. Time to live life to the full – experience, as Christian Aid says, ‘… life before death.’