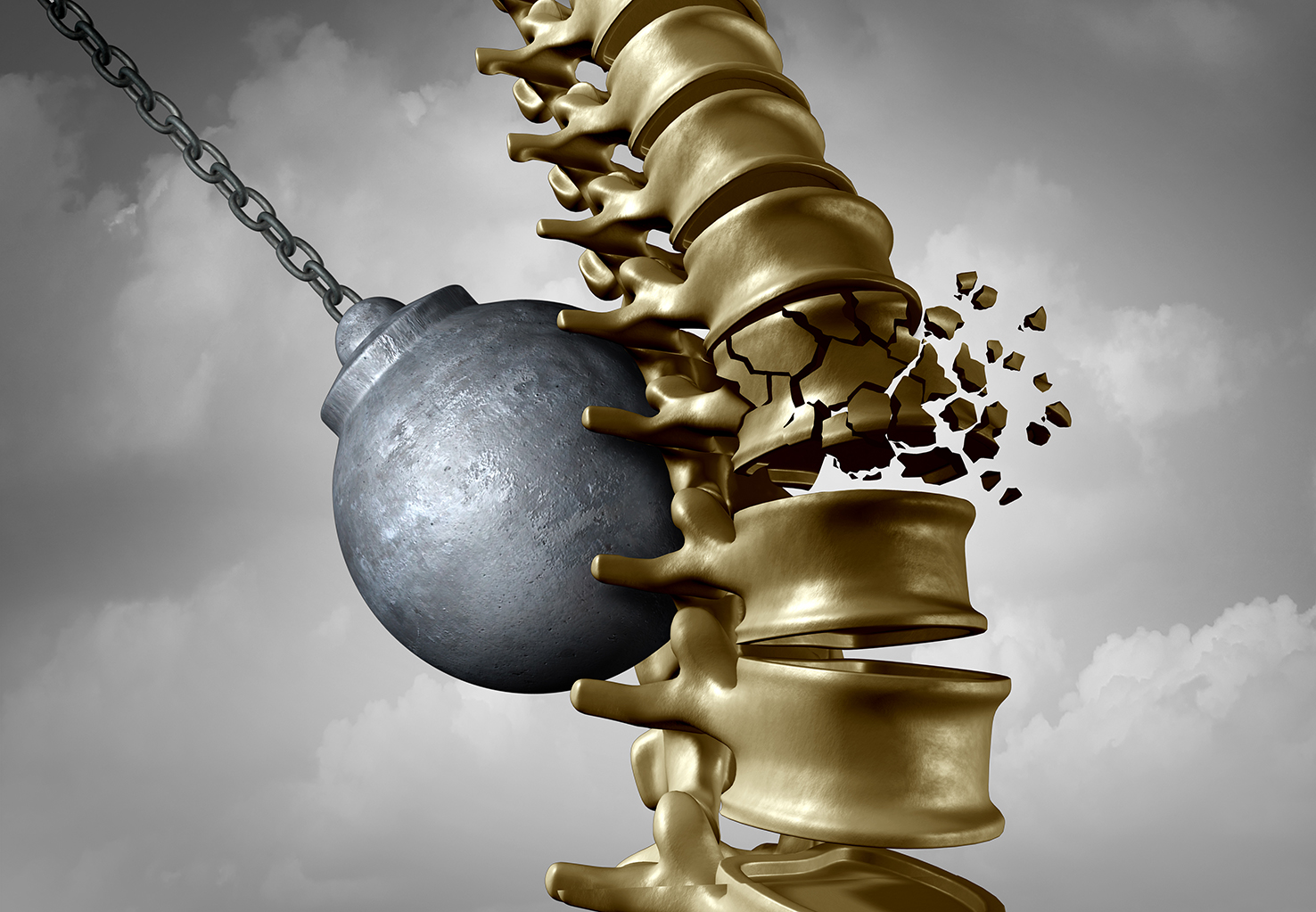 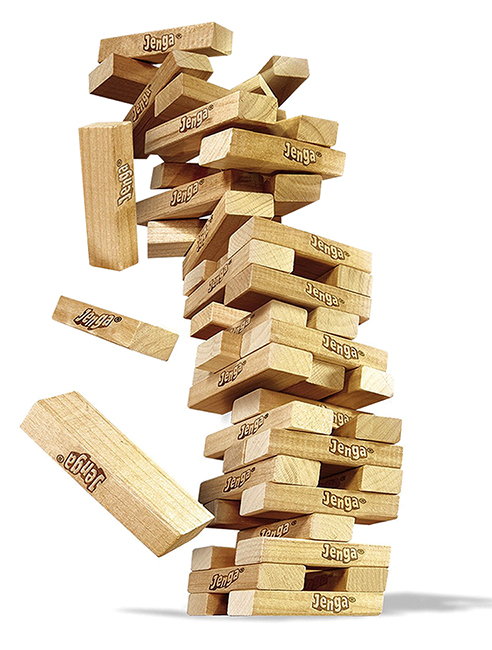 Have you ever played the game Jenga? It involves a tower of wooden bricks and each player takes it in turn to remove a brick without the tower falling down. The game ends when the tower falls, as one too many bricks have been removed.

The spine can be viewed in a similar way – it is made of repeating units of bone, separated by ligamentous discs. Osteoporosis plays the Jenga game inside the bones (vertebrae), removing strands of bone inside the vertebra called a trabeculum. In Latin, “trabeculum” means a small beam, strut or a rod which supports a framework. This is what the trabeculae (pleural of trabeculum) look like inside a vertebral body in comparison with the loss of these strut supports in osteoporosis. Now it’s a bit more obvious why some people call osteoporosis “thinning of the bones”. 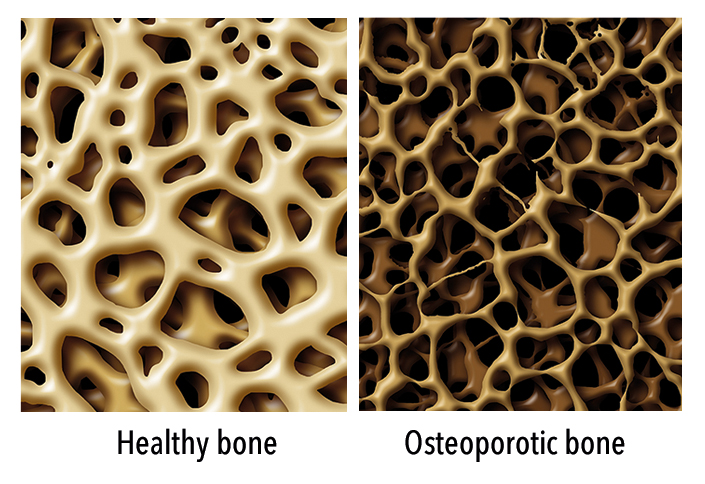 The medical treatment of osteoporosis is a vast topic, but basically involves having the initial diagnosis made by a measure of the bone density, called Bone Densitometry, or a DEXA scan. This is a quick and simple test which involves having a small amount of X ray radiation, to compare the bone density with that of an adult aged 30 years old.

At the risk of making things sound complicated, if your T score is more than two and a half standard deviations lower than the score for a thirty year old, then you have the diagnosis of osteoporosis. 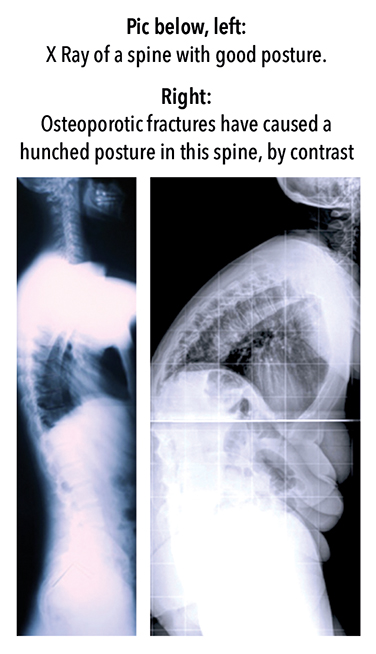 Osteoporosis isn’t a painful condition; it just means that there are fewer struts in the bone to protect them against breakage. So for example, someone with osteoporosis could break a bone in the spine just by having a big sneeze.

If you are diagnosed with osteoporosis, you need to do more than simply take calcium supplements with vitamin D. You need some medication that slows down the normal bone maintenance, which involves the trabeculae being constantly broken down but also re-made. The balance between bone breakdown and bone formation is wrong in osteoporosis, so there is more bone breakdown than bone formation, resulting in an overall reduction in bone stock.

Osteoporosis medication usually slows down the part of the process which breaks down the bone, so we get to keep more bone as a result. The medication may not stop osteoporosis, but it can slow down the process, which reduces the risk of breaking bones with small actions, like sitting down heavily, missing a step, lifting a suitcase etc.

If we think about our spines with thinner bones holding us upright, we must be very, very conscious of keeping good posture. 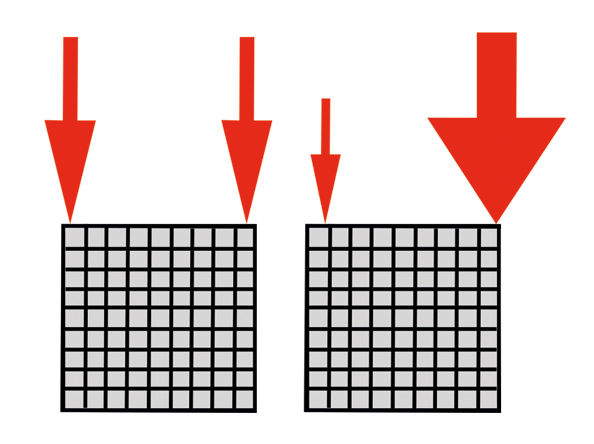 If we have a vertebral body, represented here by a box (right), the box is more likely to withstand load if the load is applied symmetrically/equally. So long as the box is very strong, however, it will withstand unequal or asymmetrical loading as well. The softer discs, in between the boxes, will distort and possibly fail (slipped disc), but the bones themselves should be fine. Poor posture is the real-life way of asymmetrically loading our spines. 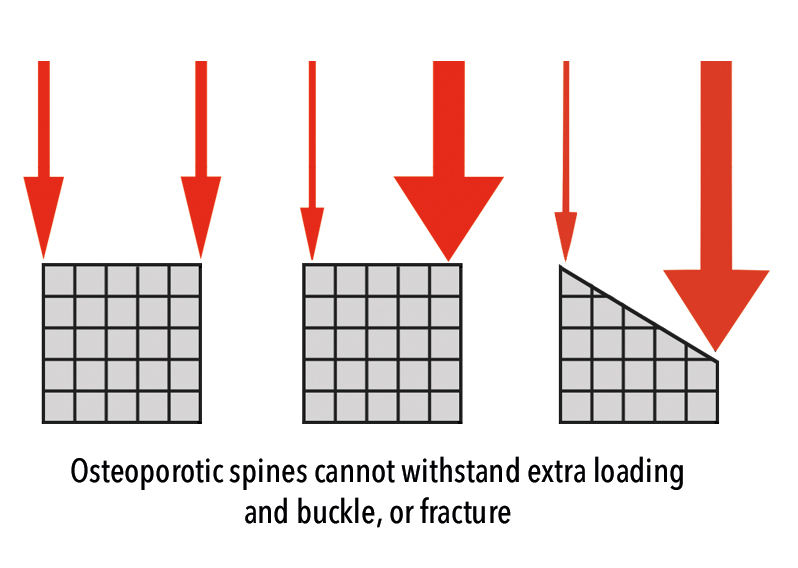 When there are fewer struts, or trabeculae to hold our bone in shape, as in the case of osteoporosis, then it is vital that we load our bones symmetrically, to avoid placing excessive loading on one part of the bone, causing it to buckle under the weight. If we tend to slouch, then we are loading the front part of our spine more than the back part of the spine. This can cause the front part of the spine to buckle under the load- what is called an osteoporotic fracture, or insufficiently fracture. The bone is insufficient to hold itself in shape and so it buckles, or breaks.

This is a painful event which takes several months to settle down, but it creates a permanent change in the shape of the fractured bone which promotes a curved or hunched spine. This means that more weight is now automatically being placed on the front of the remaining spinal bones, so that a domino effect of several fractures can, over time cause a profoundly hunched back appearance. Not only does this not look great, it also has an impact on our digestion and even our breathing! All this can be avoid-ed by paying attention to standing upright as much as possible, even if this means using trekking poles to encourage an upright posture. For a motivational article, albeit not very scientific, take a look at the link from the New York Post in 2016. It’s about an eighty five year old lady with a very curved spine, who gradually stretched herself back into shape (nypost.com/video/how-this-granny-got-her-spine-back).

We BAY readers can be one step ahead, though!

By focussing on having great posture, we can avoid developing misshapen spines in the first place.