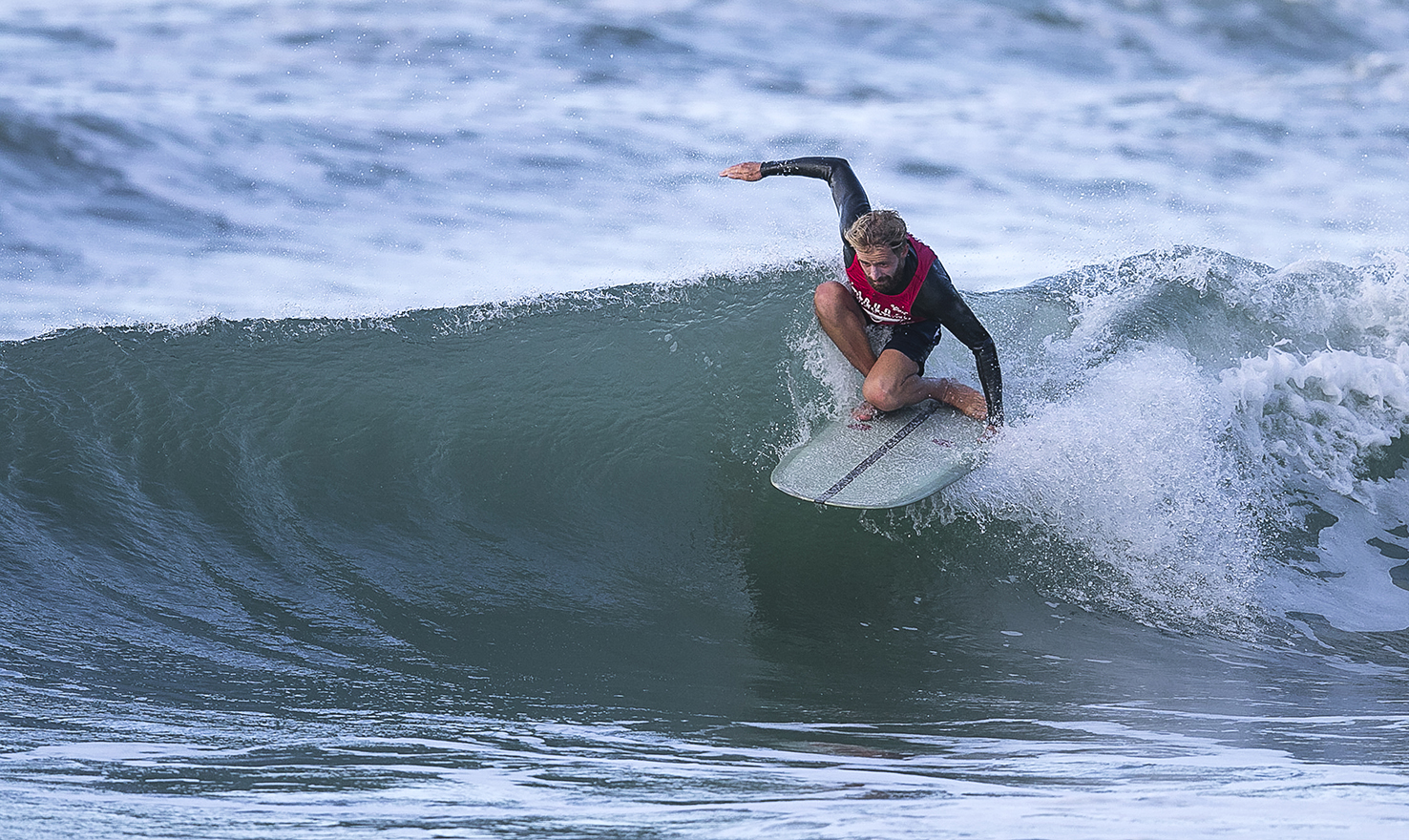 Connor taking the high road on this little gem

We continue with Guts’ trip to Australia visiting his son Connor, where both spent the second half of their holiday break entering The Noosa festival of surfing, the biggest longboard contest anywhere in the world. Here’s how they got on…

So, with two great weeks of surfing under my belt and the start of the contest just around the corner, it was time to get focused on the upcoming challenge. I had originally entered the contest for a bit of fun as my “serious” competitive days are well behind me. Connor however, was eyeing the event as a chance to show the world’s best longboarders that he belonged amongst their ranks.

As an older chap, I had entered the over 50’s category and Connor, as a young buck, the main open event. We also joined forces in the Family Team Challenge event, where two generations of the same surfing family are pitted against other family teams. 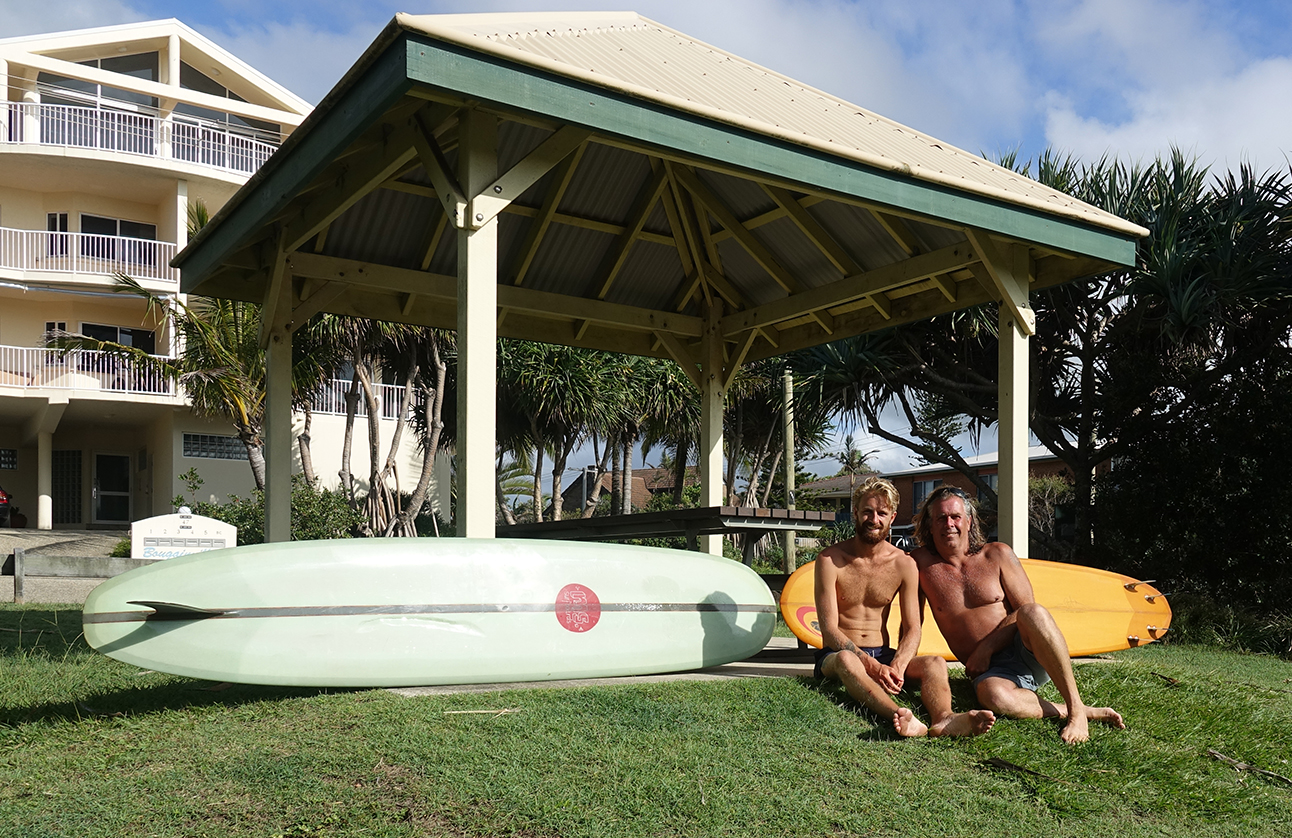 The Competition runs for 10 days and has literally hundreds of competitors from all round the world flying in to compete. It is held at First Point, which as its name suggests is the first of five iconic point breaks that make up the world surfing reserve at Noosa national parks, and is one of the most famous surf destinations in the world.

The contest got under way and the first event for us was the Family Challenge. I had a sleepy heat and only managed a mid-range score but thankfully, my team mate (Connor) was a lot more focused and took up the slack and posted the highest score of the heat, which edged us into first place and advanced us through to the next round. He did say however, that he would give me a pep talk before our next heat as he expected an improved performance from me, the cheeky beggar.

Next up (and before the threatened pep talk) was the over 50s, which I promptly lost and got demoted to the repêchage round, which meant I had to win every heat from there on in – I couldn’t afford any more bad performances.

Next up was the second round of the family challenge, and thankfully I put up a decent score on the board at last. Then, Connor shows what a class act he’s become by posting the highest single wave score of the day, a near perfect 9 point ride for a classic display of old school drop knee turns and noseriding. 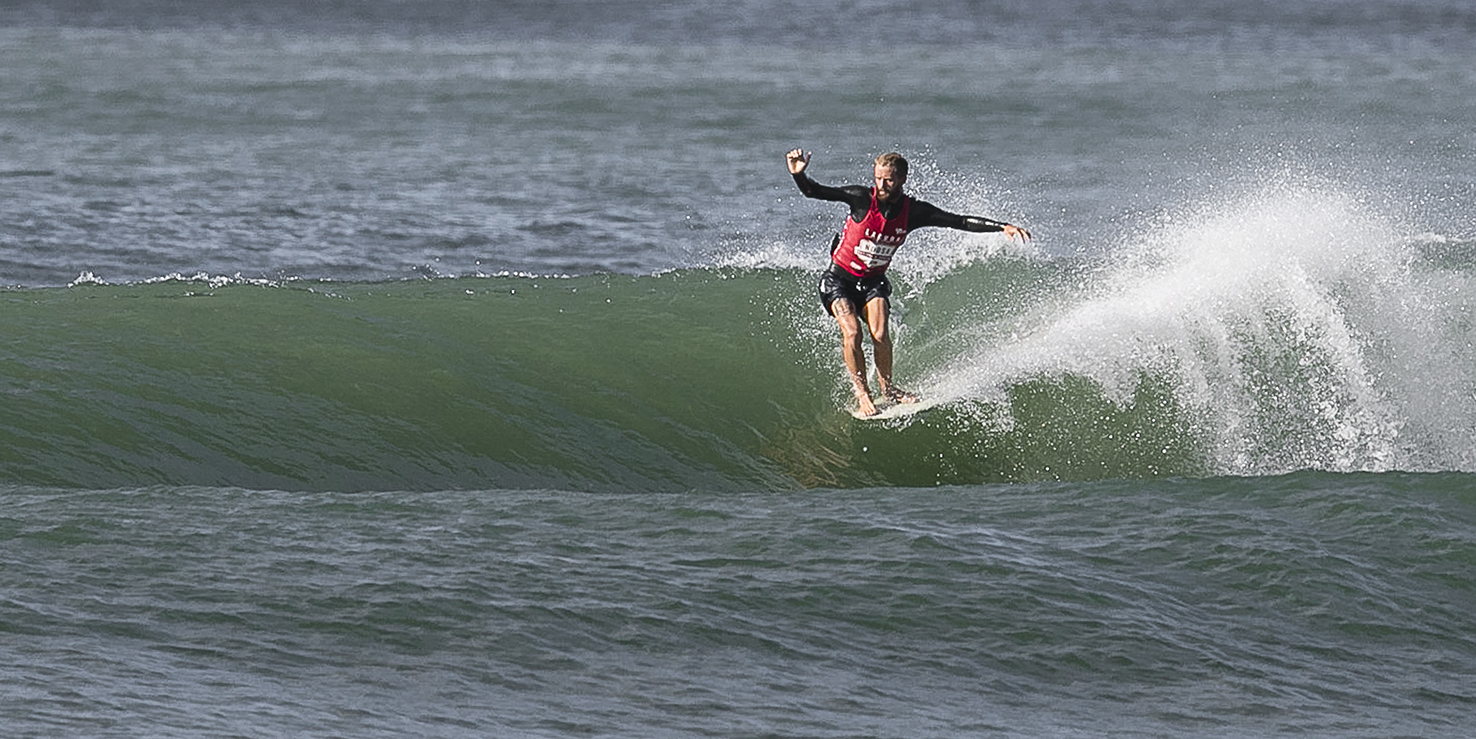 Connor perfectly perched on a cracker!

The Griffiths family were in first again and heading straight to the final.

The waves up to this point in the proceedings had been great fun but a little small. However the outlook for the next few days was excellent, with a cyclone swell due to hit the points.

Connor continued his great run of form in the building surf and easily advanced against tough opposition. Inspired by his performances, I too started to hit my stride and put in a couple of solid heats to wins to advance to the semi-finals of the over 50s. 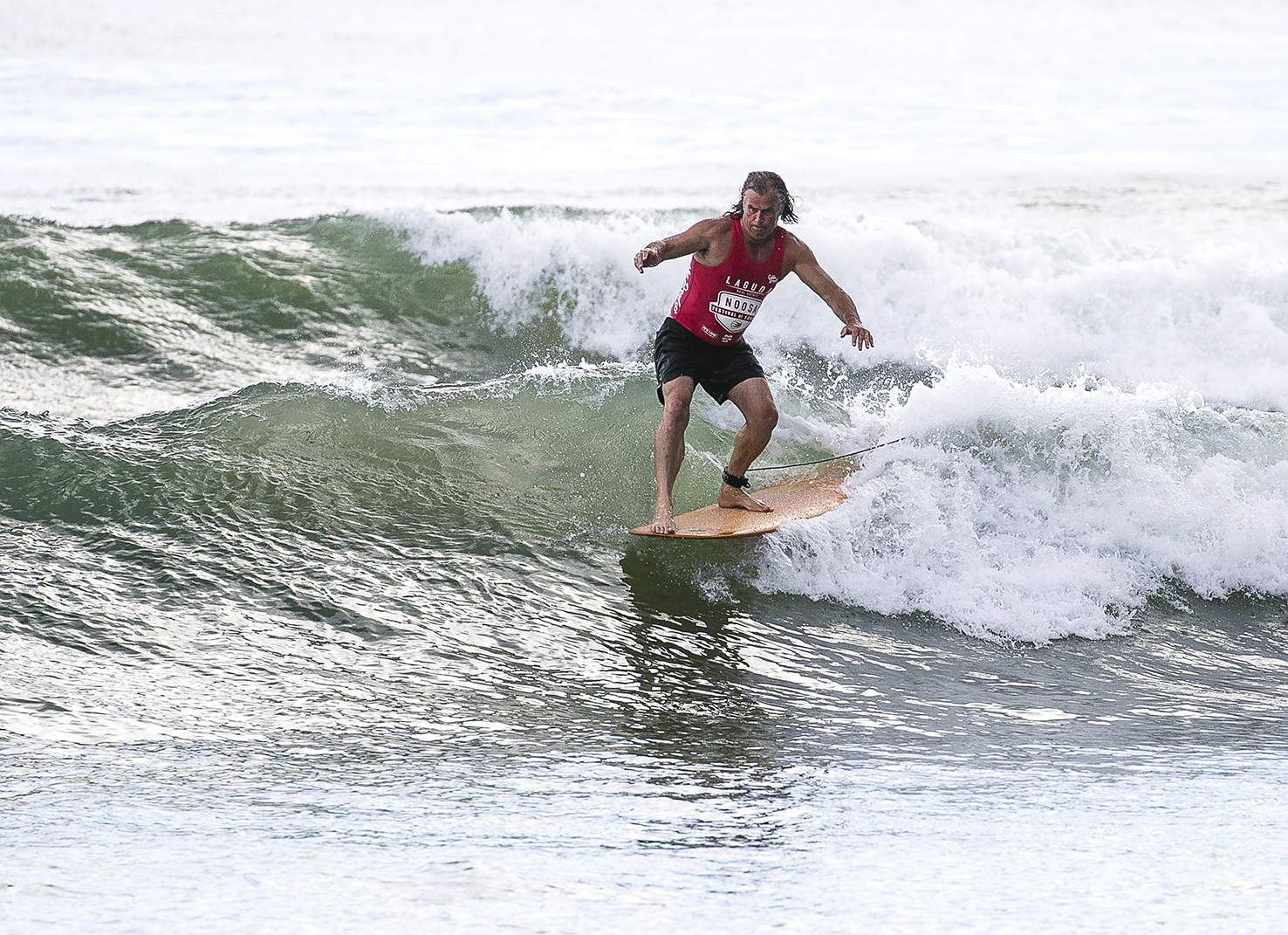 Guts getting some tip time in

The next day, with the swell now pumping, both of us had clutch heats to surf. I was up first and had the joy of surfing pumping head high first point with only 5 other guys in my heat. If the contest wasn’t on there would have been over a hundred surfers in the line-up jockeying for the waves I was sharing with a handful. I wasn’t going to let this opportunity pass me by and managed to snag a couple of great set waves and put on my best performance of the event so far with a couple of excellent 8 point rides. This put me in first place and secured me a space in the final, I don’t know who was happier, me or my proud son!!

Connor was up next, and had an absolute blinder of a heat too; advancing through a tough field of competitors and showing he really can hang with the best guys in the world. 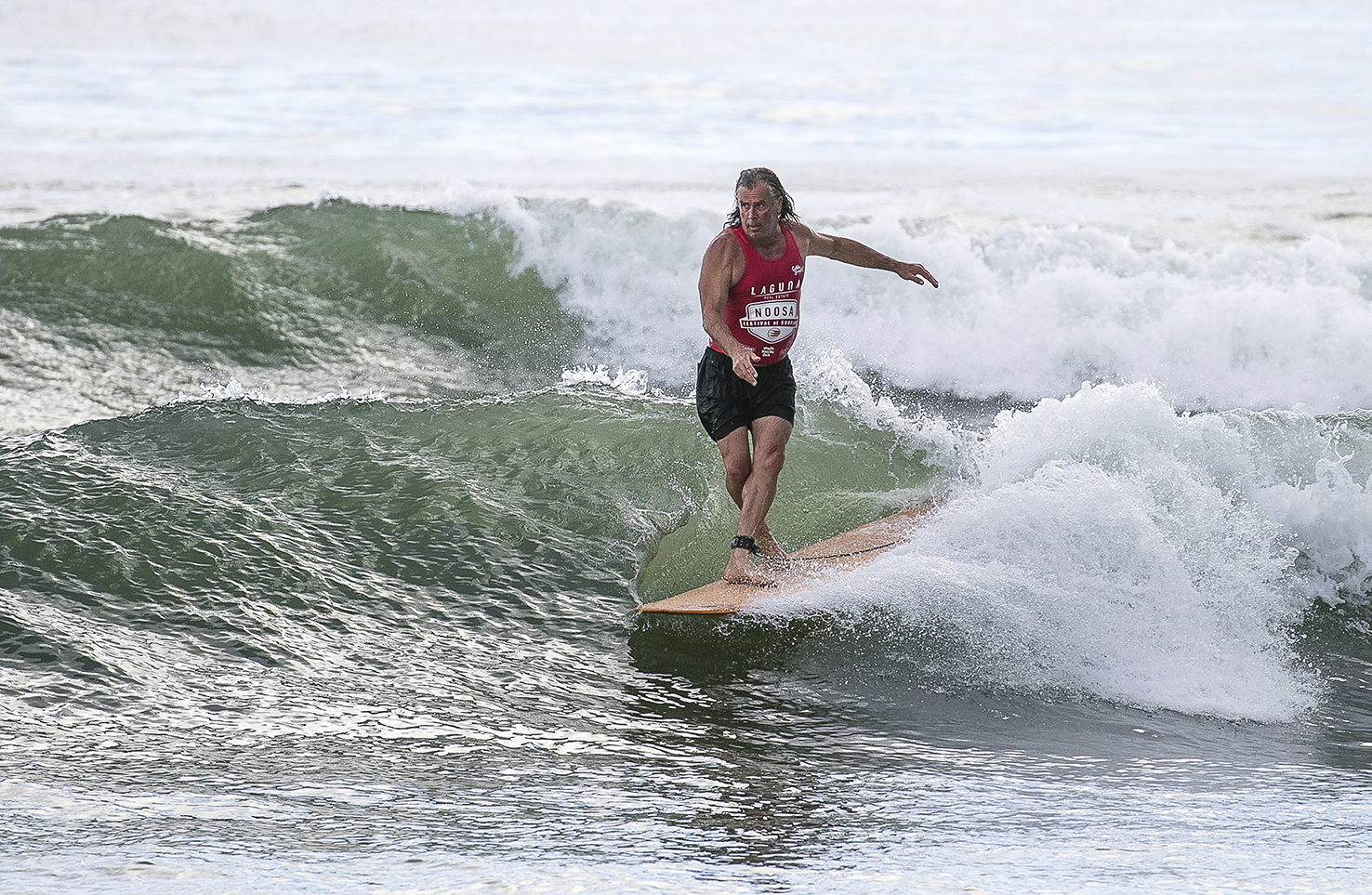 Guts stepping towards the final

With just enough time for a drink of water and to gather his thoughts, Connor was back in for his semi-final heat. This was a stacked affair with top guys from Hawaii, California and Australia all vying for a spot in the final. The waves were pumping and all the surfers were dropping excellent scores. Connor was right there in the mix, with a couple of beautifully ridden waves already under his belt. With five minutes to go, Connor needed one more solid score to put him into an advancing position. I was pacing up and down the shoreline like an expectant farther outside a delivery room. With the clock counting down to the one minute mark, Connor was still patiently waiting for just the right wave to come his way. I on the other hand was making a meal out of my fingernails. Thirty seconds to go, Connor pulls the trigger and paddles into a great looking wave and surfs it beautifully, hang five follows cut back. Deep fade, stall to hang ten through the inside and steps off on the shoreline as the buzzer sounds for the end of the heat. Is it enough though? There are a few anxious moments while the judges deliberate. They announce the score. And it just falls short! Less than half a point from the final. Gutted for him! And yet super proud of his performance and also the way he handled the disappointment.

We still had the small matter of the family challenge and over 50’s finals to surf the following day so it was home for an early night!

The sun rises on finals day, and it appears someone has turned the wave machine off! After such good waves throughout the contest, it’s so disappointing to see knee high dribble for the last day of the event. It’s such an anti-climax. Tiny waves are really not my strong-point but I gave it my best shot and managed third place in the over 50’s final and in the Family Challenge we lost a close split decision to end up second. Slightly disappointing ending I guess.

But if you’d asked me at the beginning of the week if I’d be happy making two finals, one with my son, in the biggest longboard contest in the world, I most surely would have said yes!

All photographs by Fenna Da King