I became a huge fan of the Skoda Yeti soon after first driving one close to its launch in 2009. I drove various versions thereafter, all of which impressed. Finally I put my money where my mouth is and bought one of my own. It did everything I asked of it; it drove like a hatchback, it seated 5 people, it provided more than enough off-road capability and ground clearance – more in fact – than I ever needed. Mine was 4×4, it had a good-sized boot, an elevated driving positon, and it was reliable. I towed my trailer with it. I went out to dinner in it. It was a complete “Swiss army-knife” of a car.

Then, in a moment of complete madness I sold it, ironically just before the first of the deep snow arrived. I miss it terribly. I even liked the original Yeti’s quirky looks; although I was made all-too aware not everyone did.

Sadly the Skoda Yeti is no-longer, and I’m not just referring to mine: Skoda doesn’t make them anymore. But in order to replace it they’ve built not one, but two cars. One is the instantly likeable Kodiaq. The other is this: The Karoq.

Of the two new cars the Karoq is the smaller. Nevertheless it will still seat 5, and carry their luggage. It’s got an elevated driving positon, a generously sized boot; it’s got go-almost-anywhere ground clearance, and is available with four-wheel drive (you’ll need the 2.0litre diesel for that though). It’s the kind of car that you could just as easily tow your trailer with as you could park in the swankier parts of town. It too is an all-rounder.

What you don’t get, are the quirky looks. There are no big round fog-lamps, this time, no big black bumpers, no faux aluminium cladding. The Karoq’s styling is all-together more conservative that than of the Yeti’s, it’s more discreet, more mature. More, dare I say it, anonymous, perhaps? But that’s not to say by any means that it’s unattractive.

You see, the Karoq’s beauty is far more than skin-deep.

Skoda’s tag-line, their motto so-to-speak is “Simply Clever”. And that’s exactly what the Karoq is. There’s an ice-scraper that stores behind the fuel-filler cap (our car also came with optional heated windscreen and washer jets), there’s an umbrella that stores under-neath the passenger seat, and there are aircraft-like foldable tray-tables on the backs of front seats that are designed to hold tablet-devices. The glovebox is cooled, the door bins have been designed to hold a 1.5 litre bottle, and the LED boot-light is removable and doubles as a rechargeable torch.

And then there’s the back seats. All Karoqs of SE spec or above get what Skoda calls Varioflex seats. What that means is, any of the three rear chairs can be slid or tipped forward, or unclip-ped and removed completely, enabling a myriad of seating and load-lugging options. And, thanks to the positioning of some clever hooks and lashing eyes you’ll never have any trouble carrying your passengers, mountain bike, Labrador, or take-away curry home again.

You also get a raft of other kit that includes stuff like tyre pressure monitoring, LED cornering front fog-lamps, keyless entry, an 8 inch touchscreen with DAB and Bluetooth, a rear view camera, myriad airbags, front assist radar and automatic braking and ESC – that’s electronic stability control – and a host of other acronyms there just isn’t space to list. You certainly won’t be left wanting for stand-ard equipment and, the interior on the whole feels pretty plush too – better in fact than some equally priced, and equally sized, VWs.

However, what you may be left craving for is a little more involvement. Whereas the Skoda’s first SUV was once described as “driving like a well-sorted hatch”, the Karoq drives, well, just like an SUV.

Skoda lent us the 1.5 TSi petrol with a 6-speed manual ‘box and 148bhp, which is probably, engine-wise, the pick of the bunch. It’s smooth, relatively economical thanks to its ability to deactivate 2 of its cylinders when running under light loads; Skoda claim 51.4 Mpg combined, we got 42.7 over a week out here in the hills, and it never feels sluggish or under-powered. But ultimately the Karoq’s certainly been set up for comfort rather than speed. 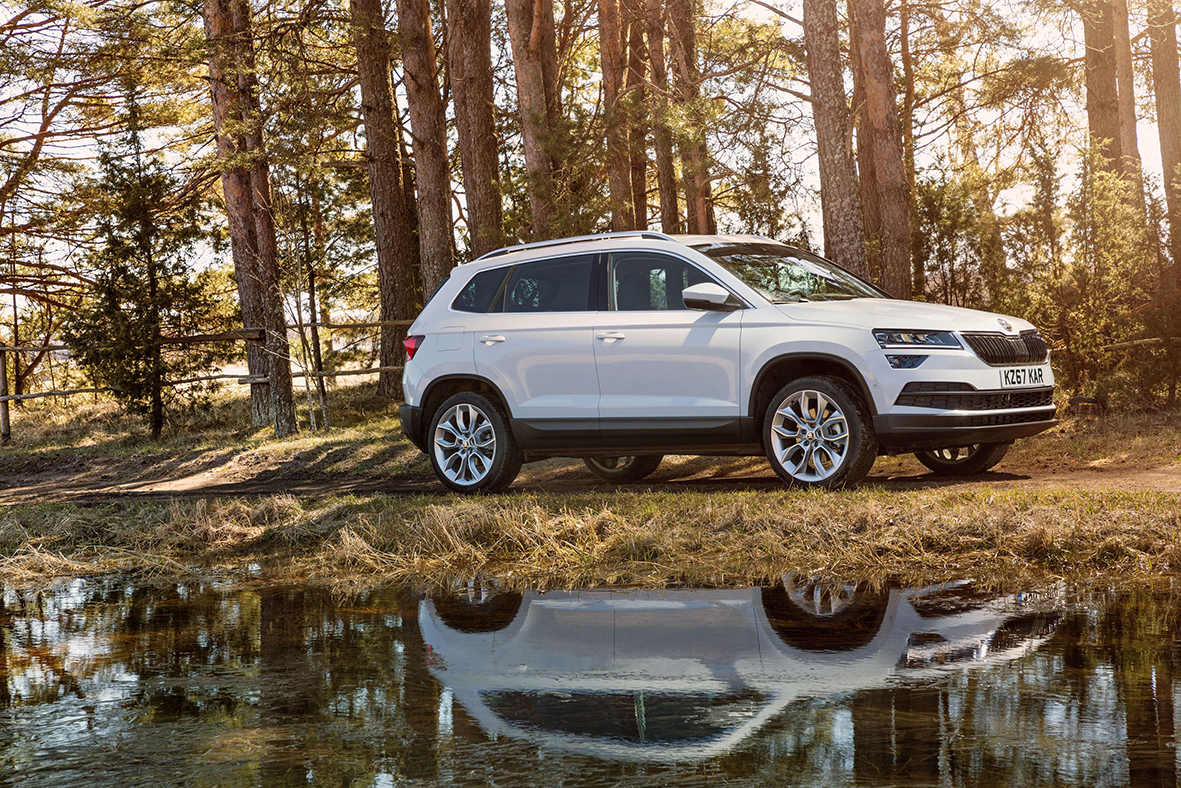 The steering is a tad numb and there’s more body-roll that you might be expecting from something with predominantly German underpinnings. Wind noise creeps at motorway cruising speeds and the Karoq can lose its easy-going composure when asked to traverse a bumpy British B-road. Perhaps that’s because only four-wheel drive Karoqs get multi-link rear suspension whereas front-drive only models have the less-advanced torsion beam setup, which, I’m reliably informed, also increases noise from the rear end of the chassis.

I suspect though that most Karoq owners probably won’t push their cars quite that hard, and instead they’ll be more interested and attracted towards practicality, durability, and value for money. All areas in which it can’t be argued the Karoq excels.

After a week in its company I’d happily live with the Karoq day-in-day-out. It does every-thing the Yeti did and it feels plusher too. It’s better in almost every way.

I just wish they’d given it a bit more personality.