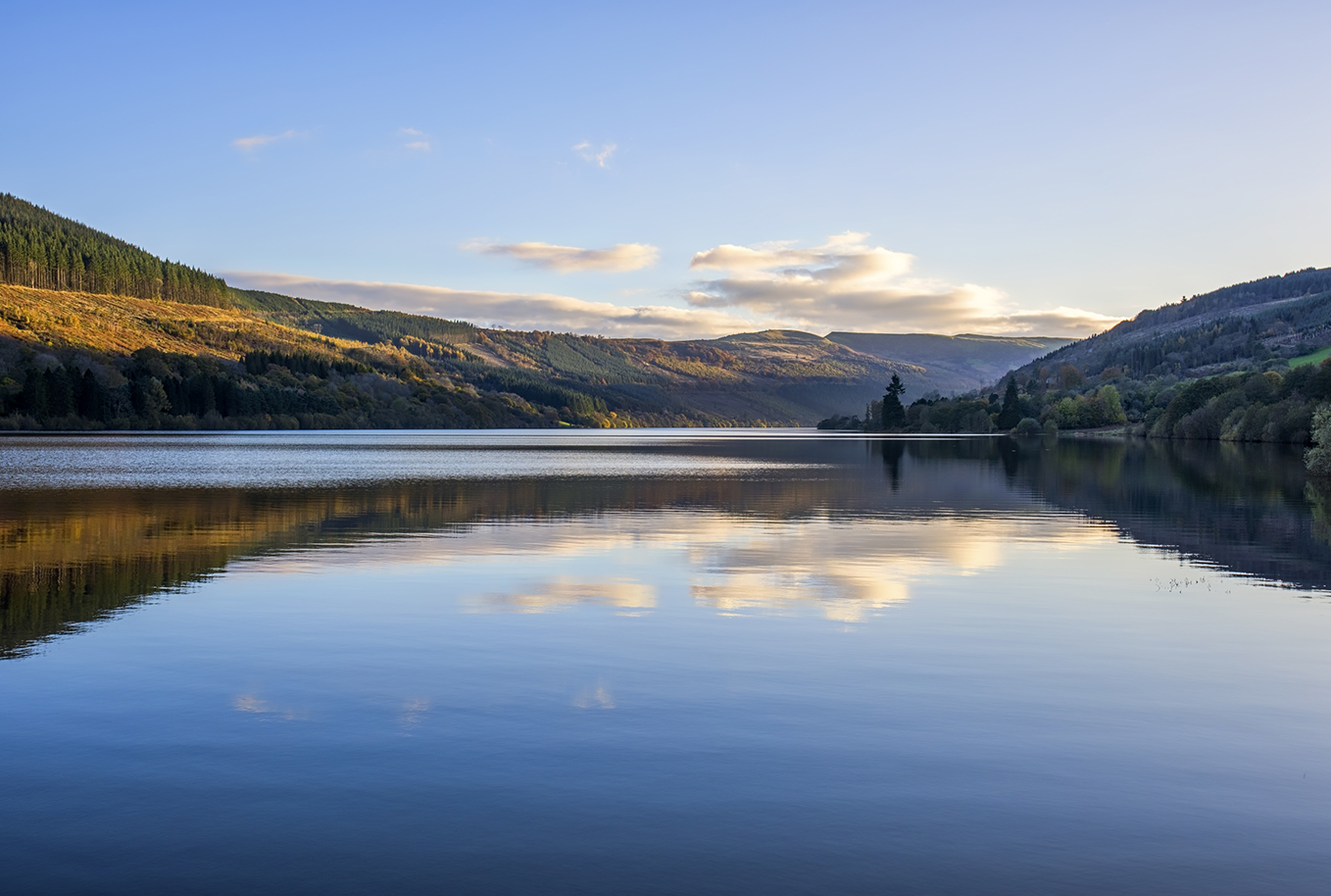 The water reflections of the Talbont reservoir, the largest stillwater reservoir of central Brecon Beacons

If you own a barge or a bicycle, Talybont or to give it its correct name, Talybont-on-Usk is a great place to start your adventures. Falling into the latter category, I must say I’m rather envious of any member of the first; the relaxed, sedate canal lifestyle certainly holds its appeal to anyone who takes pleasure in wandering, dreaming and living life at a slower pace.

The Brecon Beacons’ website describes Talybont as a pretty village; they might as well have just said it’s a nice place. Yes, I suppose it is pretty but there is a lot more to Talybont. Home to a campsite, two rather splendid pubs, a cafe which offers a particularly good cooked breakfast (go large!) and a bike hire shop Bikes and Hikes run by Keith (both pictured above), who is a font of knowledge on all things two wheeled and the trails in the surrounding hills. The village also played host to a certain gentleman who went by the name of JRR Tolkien, it is rumoured that JR spent some time here whilst writing his famous book. There may actually be some truth in this as the named Hobbit settlement of Crickhollow mentioned in the tome isn’t too dissimilar to Crickhowell, and the inspiration for the Hobbit colony of Buckland might well have come from Buckland Hall. We shall never know. 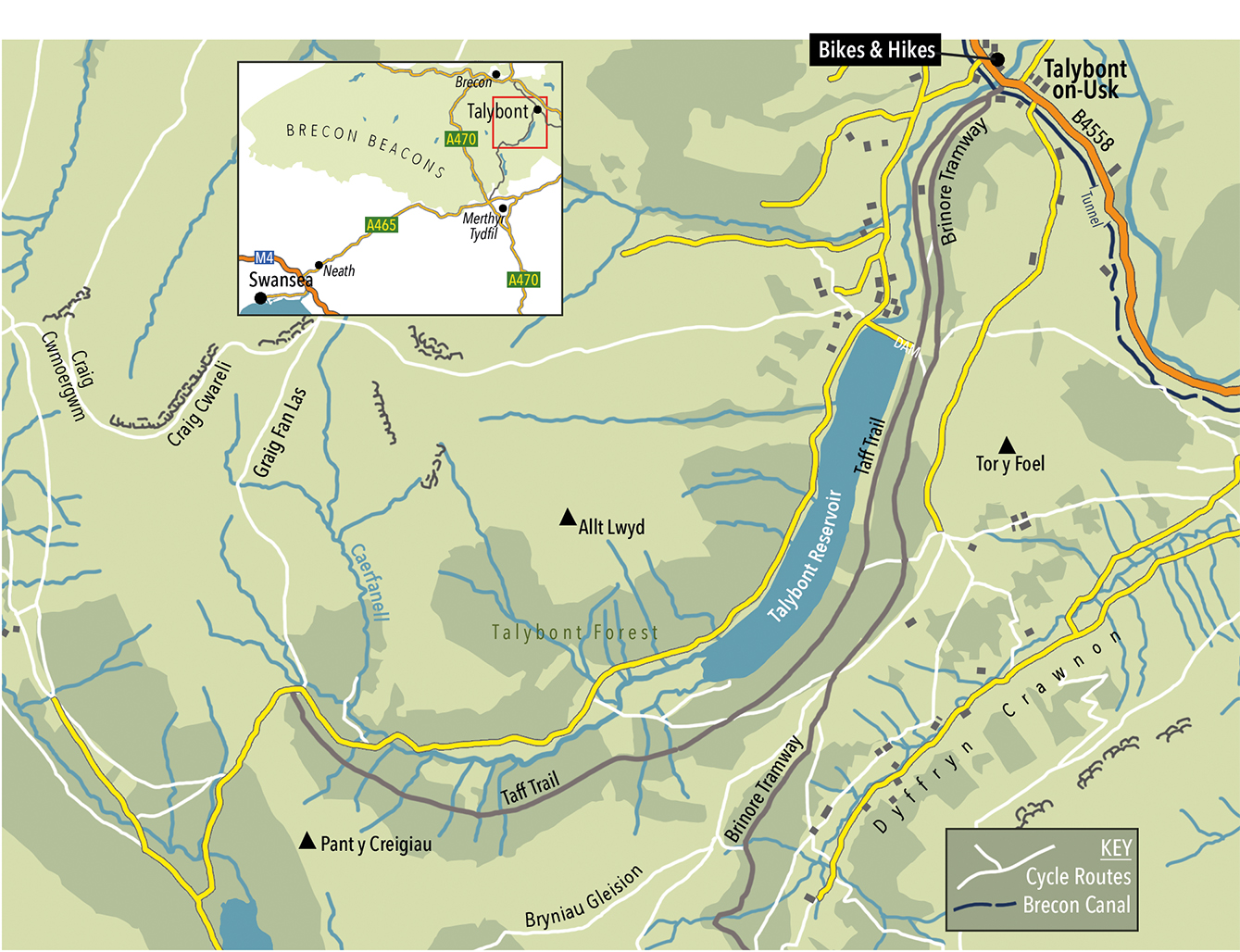 As a mountain biker, the pubs and cafe aside, (which by the way offers a fantastic packed lunch) the appeal of this alluring area of the Beacons is the great variety of trails that are here to be explored. From compacted forest roads to open moorland, tight forest paths to ancient rocky tracks, there is something here for all levels and abilities. Families too are catered for with the canal towpath and for the older kids, perhaps a cycle up the Brinore tramway and onto the Taff trail. If you have little ones then I’d recommend taking the B road up to the reservoir and park near to the dam which is lovely to cycle over to and also links onto the Taff trail missing out the rather bumpy climb out of the village on the tramway. 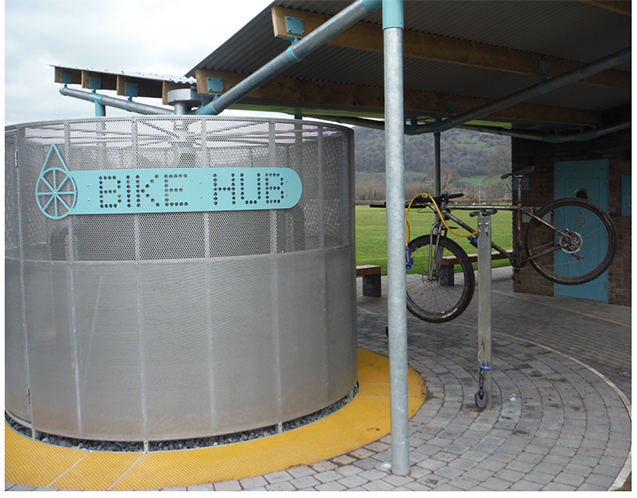 Whilst a bike wash is a common trademark of the trail centres, it came as a surprise to find one in a small village in the Brecon Beacons. With the aid of The Big Lottery, the people of the village have created a Bike Hub (pictured right), offering not only a bike wash (using recycled rainwater collected from the roof of the centre) but a toilet and shower facility. For less than a pint of ale in The Star Inn, you and your bike can both have a wash and should you feel the need, you can even drop the kids off before nipping in for a drink.

Now, for this article, I’m not going to give a recommended route and whilst that sounds a bit of a cop out, there’s method here. There’s a certain joy to be had in riding something for the first time, it matters not if dozens of people have ridden it before, for you, it is new, your own first descent if you like, and this area is just perfect for that. And by using the village as your start/finish point, there is loads to explore within a short ride, with little if any chance of getting lost. 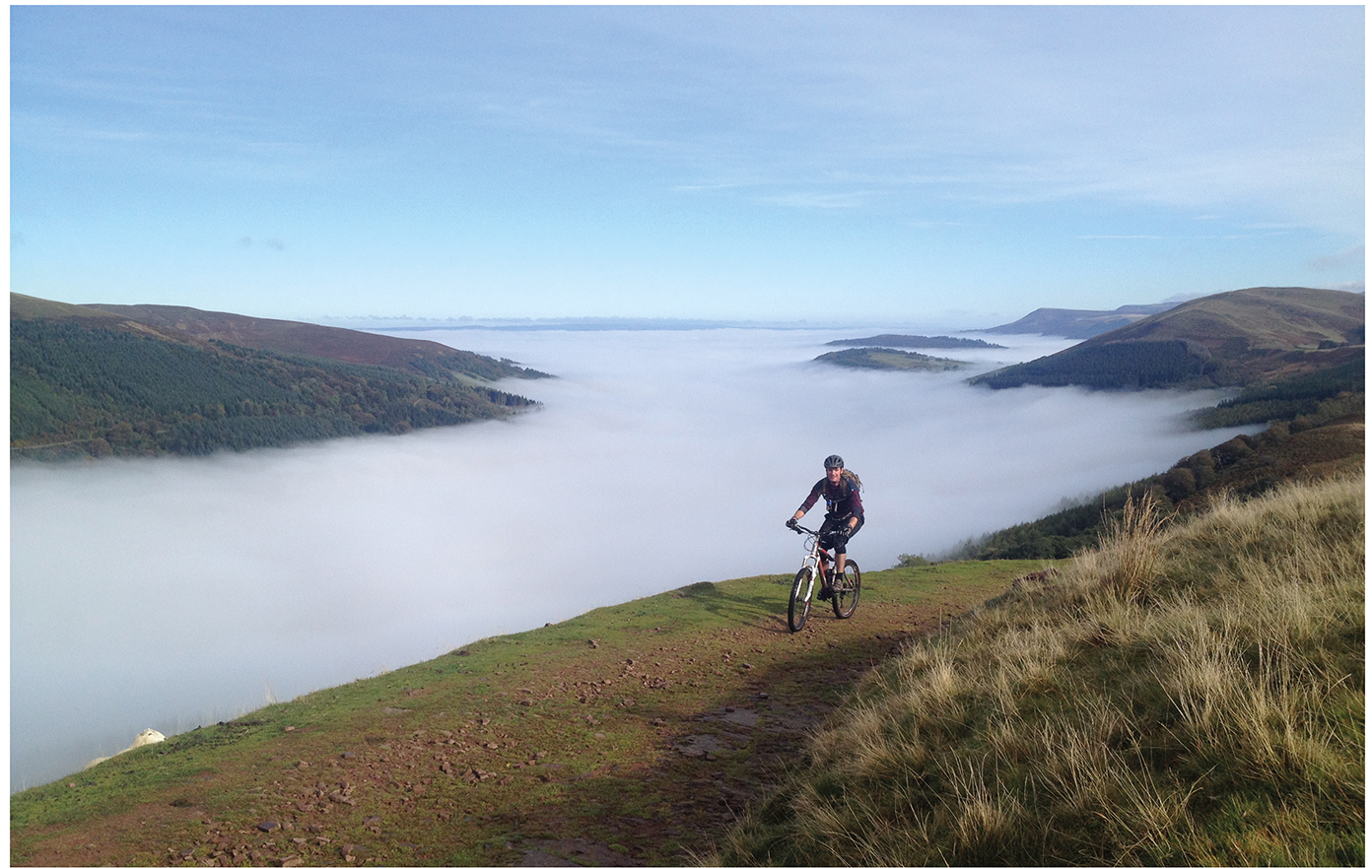 Looking into the cloud filled valley of the reservoir – pic Keith

There is available, the National Parks handbook Mountainbiking in the Brecon Beacons which offers a green, blue and red route all starting from the village. The green route is a simple out and back, the blue route has an inordinate amount of climbing and offers little in return for your efforts having perhaps only 500mts of single track, whilst the red is probably better ridden the other way around. However, there’s no need to purchase this, instead, go and have a chat with Keith, armed with a copy of Bay Magazine and he’ll be more than happy to advise you on an appropriate route. 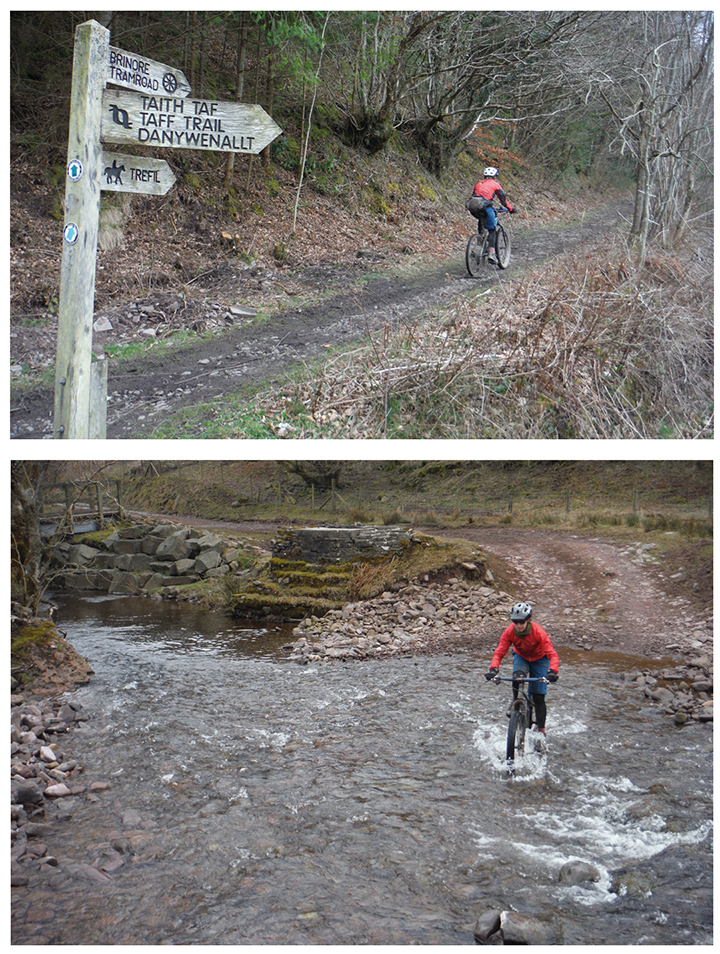 For a taste of what the area has to offer, here are some personal favourite sections of trail. Firstly the bridleway that runs from grid ref SO 100 175 (OS Landranger 161) around the head of the Dyffryn Crawnon valley and then links up with the road to Trefil Quarry, has to be one of the best pieces of cross-country trails in South Wales. Perhaps better suited to the more experienced rider, there are some interesting challenging sections, one in particular that at the time of writing is particularly narrow, with no room for error.

Another is the wonderfully rocky (restricted) byway that drops back down to the reservoir from SO 101 176, a trail that will certainly rattle your fillings.

And for a classic all out blast, the bridleway across Bryniau Gleision is really enjoyable. The rest I’ll leave for you to find, but be sure to keep an eye out for some off-piste trails, as I’ve heard that the path on and above Graig Fan Las is worth a look……… One point to mention here is that they have just finished some fairly extensive forest operations leaving some of the trails in a ‘bit of a state’. Hopefully some dry weather and sunshine will aid nature’s repair work. 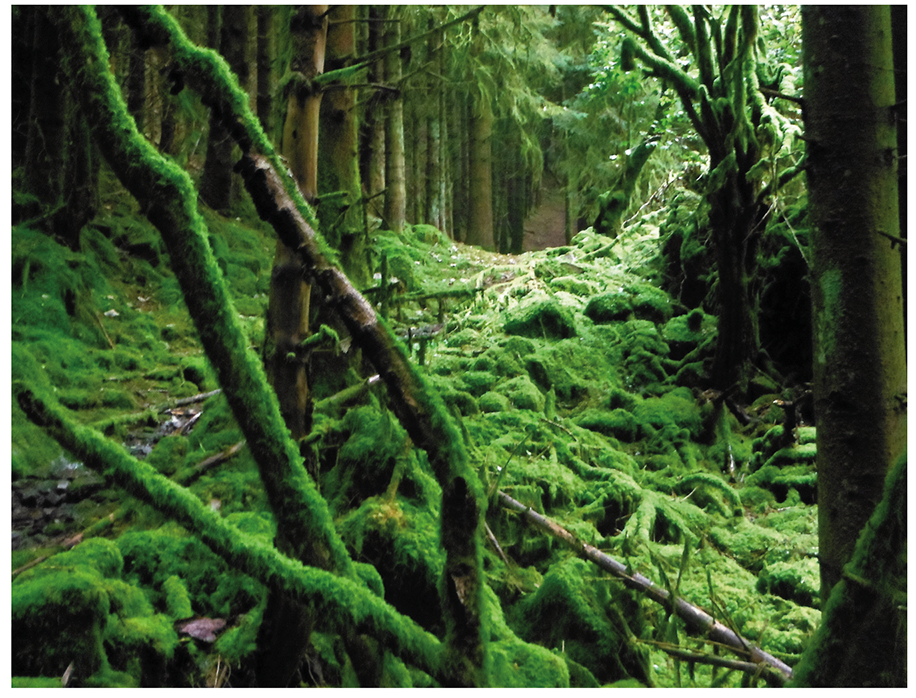 For all the reasons I mentioned earlier, it’s difficult to find any fault with Talybont as a base, except of course, to access the better trails, the only way is up. That said, you will be well rewarded for your efforts, for once on top, particularly on a clear day, the views are stupendous, offering tantalising glimpses of distant sheep tracks and paths just waiting to be ridden. Again I couldn’t possibly comment, but apparently the path along the edge of Craig Cwmoergwm and Craig Cwarelli offers some fantastic technical riding. Take it from a man who knows though, if you are tempted by something far away on the opposite hill, check the time before heading off, for whilst riding the hills in the dark is great fun, without lights, it becomes a whole new ball game. Having said that, as I have said many times before, some of the best night rides are the ones when there’s been no artificial light, just the luminescence of the moon. 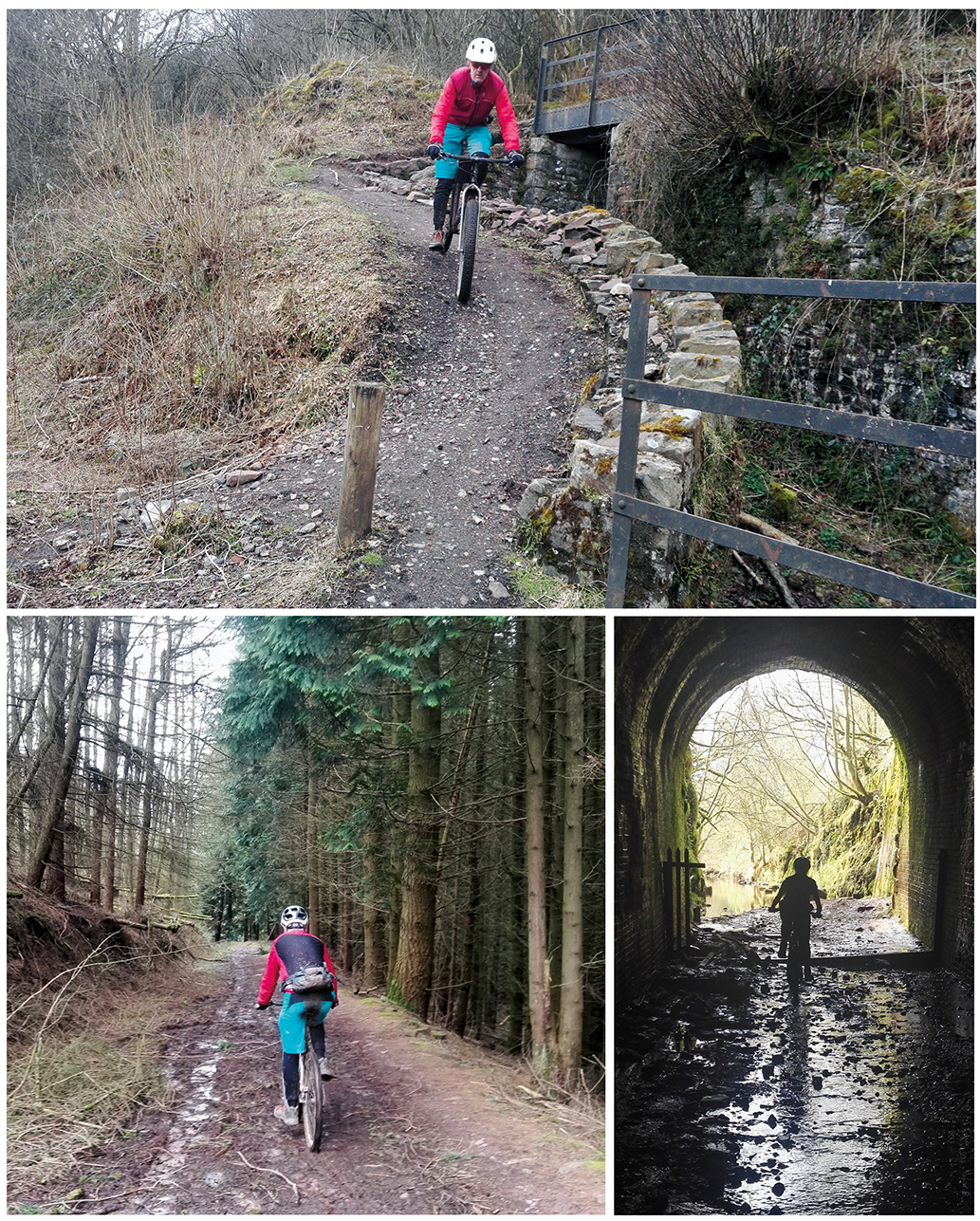 Some of the many tracks you can explore and discover / entering the tunnel, but where is it?

And to top it all….there’s a tunnel! And not just a little one, but one that is about 400 mts long. It’s not marked on a map (though if you look at the 1:25000, the rather obvious clues are there) and very easy to cycle pass, but it is there and it is open. What is it about trains and men? This was one of my little gems when I was guiding; clients, some of whom earned more than the GDP of a small country could be heard to whistle and make train noises as they cycled through! Both entrances are rather wet, and the one at the southern end is deep enough to potentially cause an upset so is probably best not attempted on a cold day. Where is it? Ah, now, I did mention it in the Christmas article but for those who missed it (shame on you!), all I’ll say is that in places the Taff trail uses an old railway line, so go explore!

Ed’s note: Keith also has some electric bikes for hire – so if you’re considering buying one this could be a good opportunity to try one out. Bikes and Hikes is open from Wednesday to Sunday and only by appointment on Monday and Tuesday. Keith can be contacted on 07909968135.