Ian’s walk for June is the highest point in Southern Britain – Pen y Fan. It’s a challenging walk, but in the right weather conditions it is well worth the effort for the fantastic views from the summit.

Have you noticed that when using analogies to illustrate measurements of scale the media has a tendency to use a number of common yardsticks? It’s usually double-decker buses for length, Nelson’s Column for height, football pitches for area and for volume, thanks to John Lennon, it’s the Albert Hall. This has always puzzled me, especially the bus comparison. Because in peoples’ minds what on earth does the fact that a bus has an upstairs have anything to do with its length? Why not say a coach or a single-decker? (bus spotters need not reply). As for football pitches, anyone who’s played up on Mynydd Newydd and then on the Liberty for instance will know that they come in very different sizes. And of course it assumes that everyone has seen Nelson’s Column and visited the Albert Hall. It’s all very unsatisfactory to be honest. So with this in mind, I’m on a mission to try to come up with some alternatives, maybe with a regional slant. But until I do I suppose I’ll have to go along with the flow.

So whilst I wrestle with the options, let’s do this month’s walk which takes us to the twin peaks of Corn Ddu and Pen y Fan. Along with some chums, I’ve done many walking challenges over the years and this climb has been an integral part of our training regime. It now seems to be a rite of passage for walkers or for those who are discovering the pastime and this seems to be borne out by how popular it’s become of late. It’s the highest mountain in Southern Britain at 886m (that’s 17 Nelson’s Columns and just over 8 Meridian Towers – I think I’m onto something here!), it’s physically challenging, there are routes to suit varying fitness levels and the view at the top is to die for. Weather permitting of course.

A word about the weather. Although not a particularly high mountain in the grand scheme of things, the weather at the top can be very different to that at sea level. Many a time, we’ve returned from the summit where the conditions have been brutal – high winds and freezing cold temperatures – passing people on their way up in T shirts and flip-flops. Just be wary. *Earnest Bear Grylls Voice* – ‘Respect the mountain because it has no respect for you’.

Now, the two most popular ascents start from the Storey Arms. The one starting alongside this old coaching inn is the steeper and more challenging one and is part of the legendary Fan Dance used in the SAS selection process (see photos). The other, starting half a mile to the west at Pont yr Daf, however, is far gentler, more gradual and eminently doable for most with a modicum of fitness. And it’s child friendly. I have to be honest and say that neither route is particularly interesting. Both are a bit of a slog and the easier way up in particular is a bit featureless until you get close to the top. So the route I’m going to suggest as an alternative, whilst as physically demanding as the one from the Storey Arms, is far more spectacular and rewarding. 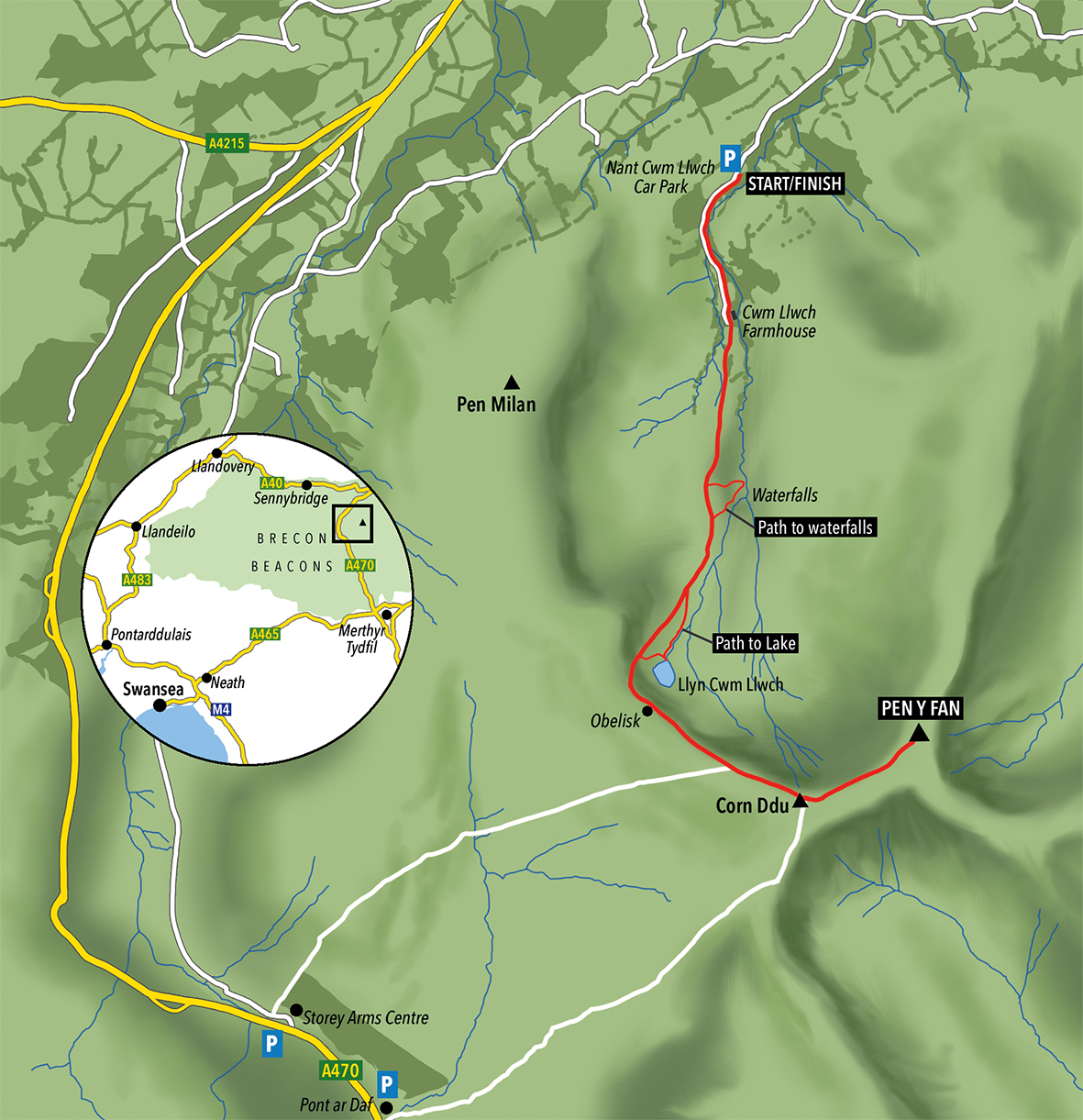 It approaches the peaks from the north up the valley known as Cwm Llwch. Navigation is pretty simple as your destination is constantly in view and the paths are well defined. The only major issue (non-physical issue that is) is trying to find the car park in the first place which is accessed down some pretty narrow country lanes – a bit of a nightmare if you come up against oncoming vehicles (please see map). Naturally, the route is nowhere as popular as Storey Arms so whilst you’ll not be completely on your own, you run little risk of being trampled in the rush. (The day I did this both Storey Arms and Pont yr Daf car parks were pretty full by 8am, further proof of its popularity)

The walk is approximately 6 miles long (2160 Double decker buses or 66 Sail Bridges – yes, cracked it!!) and is basically a straight up and back with a slight detour which I’ll touch on later. As a footnote, there are several circular route options in this particular area so if you are interested then I suggest you either plan one yourself from the OS map, or a simple search online will throw up some alternatives.

OK, so off we go. Out from the car park, which is no more than a relatively flat grassy area along-side the banks of the stream, and straight in front of you should be a large boulder with ‘No vehicles beyond this point’, scrawled on it. If not, then you’re in the wrong place. There may also be people wild camping here (above left). Missing the facilities that you’ll find in a traditional campsite, I naturally wondered about their toilet arrangements, quickly reaching the conclusion that there weren’t any. So I’d certainly watch your step along here. Onwards for a few hundred yards you cross a wooden bridge then keep left following the well defined track. Next you’ll come to Cwm Llwch farmhouse (above right) it is now owned by Malvern School and used as their outdoor centre. (There’s posh – never had one of those in Morriston Comp). Keeping the building to the left, you’ll cross two stiles and after a little while further a third, and it’s here that the route opens up into open moorland. It starts to get a bit steeper too, but at the same time ridiculously spectacular. High above and to your left is the ridge of Cefn Cwm Llwch whilst to your right the peak of Cefn Milan. But ahead of you and dominating the entire area in a rather intimidating fashion, is Pen y Fan and Corn Ddu. 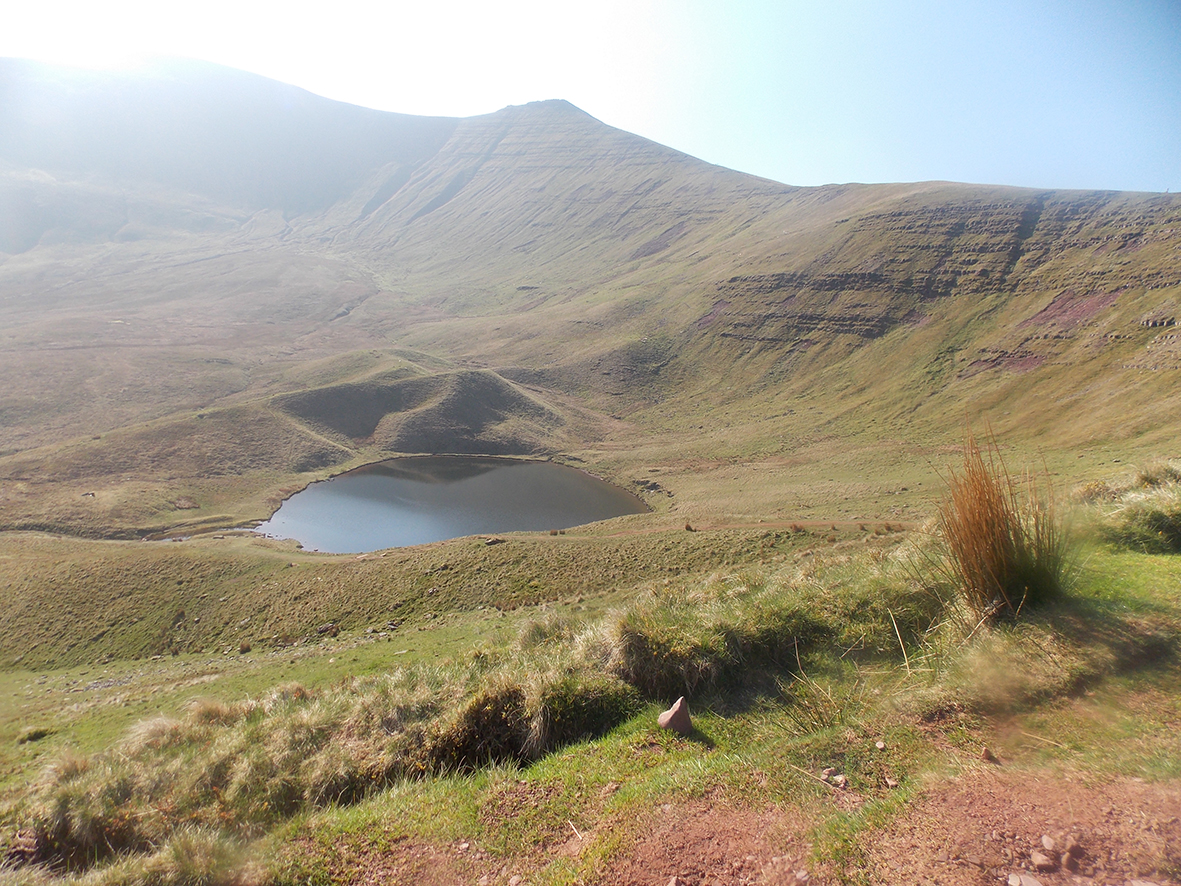 But there’s more. As you climb, the path veers to the right traversing Cefn Milan and soon the glacial lake Llyn Cwm Llwch comes into view to your left. The lake, about the size of half a Mynydd Newydd football pitch, has been hidden up until now by the rather lumpy terrain, so if you don’t know it’s there it comes as a very pleasant surprise, which of course I’ve now spoilt. Whilst it’s a tad unremarkable in itself, its setting beneath the surrounding slopes is quite dramatic. For those of you who’ve been paying attention over the last year or so to my ramblings, this area of the Beacons owes much of its shape and landscape characteristics to the effects of the last glacial age and this particular valley is no exception. There are two main processes at work. Firstly, erosion; the massive ice flow literally rips and tears at the surrounding rock gouging out the U shaped valley and the bowl in which the lake lies. Once the ice melts it results in the second process, deposition. It literally dumps the stuff it’s collected forming the lumps, or moraines as they’re known in the trade. And this valley is full of them. 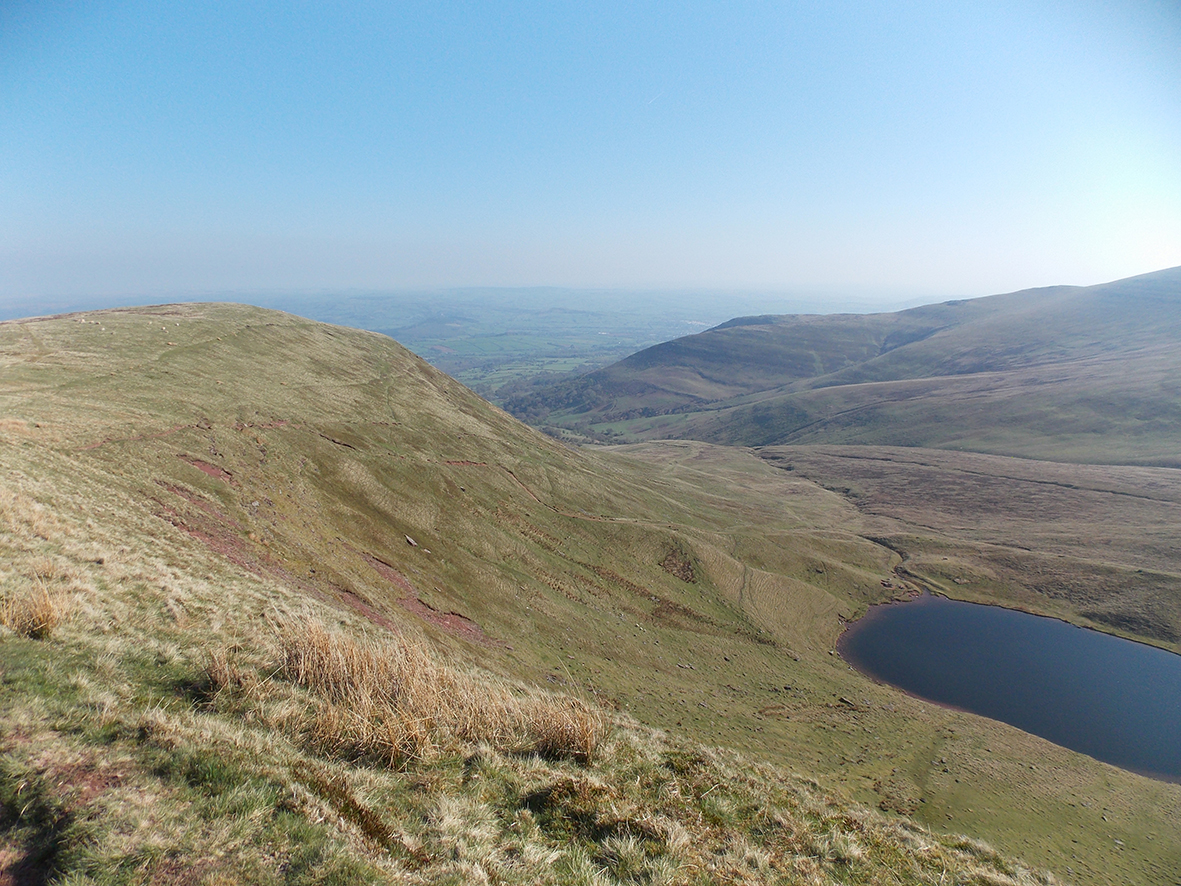 Following the ridge of Cwm Llwch overlooking the lake

Unsurprisingly, there is also a legend associated with the lake (see also Llyn y Fan Fach). This one tells of an invisible island to which access is gained via a doorway which only opens on May Day. Once on the island, you’re met by music playing fairies who present you with fruit and flowers. I’d avoid the mushrooms around here if I were you, if you know what I mean. 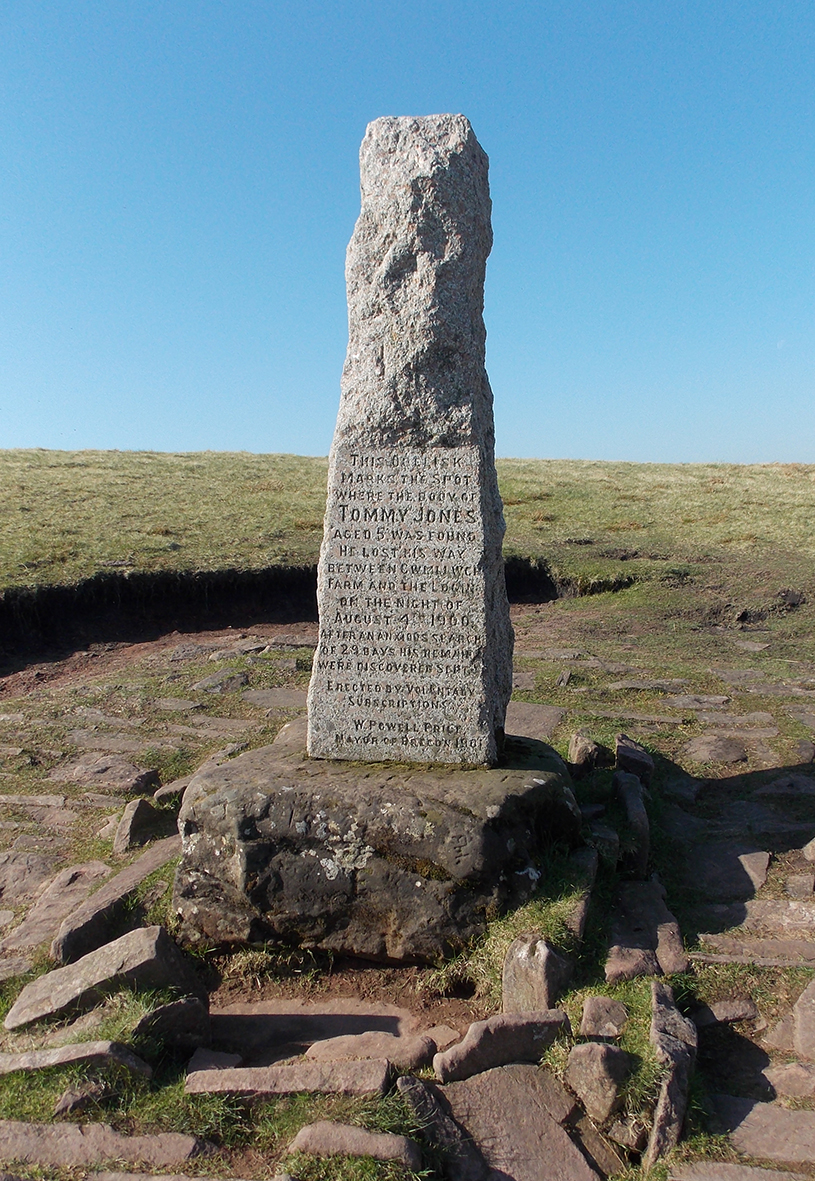 Onward then to the ridge of Cwm Llwch when you’re immediately met by a granite obelisk, marking the spot where the body of young Tommy Jones was found after he’d gone missing on the hills in the summer of 1900. The path leads you to the final ascent to Corn Ddu, which from this vantage point looks steep and daunting. And it doesn’t lie. It’s not far in length but it’s a right old lung buster. Once you reach the top you might want to have a little breather – no, you will want a little breather – but if not, just push on to Pen y Fan a couple of Sail Bridges away over the saddle between the peaks. 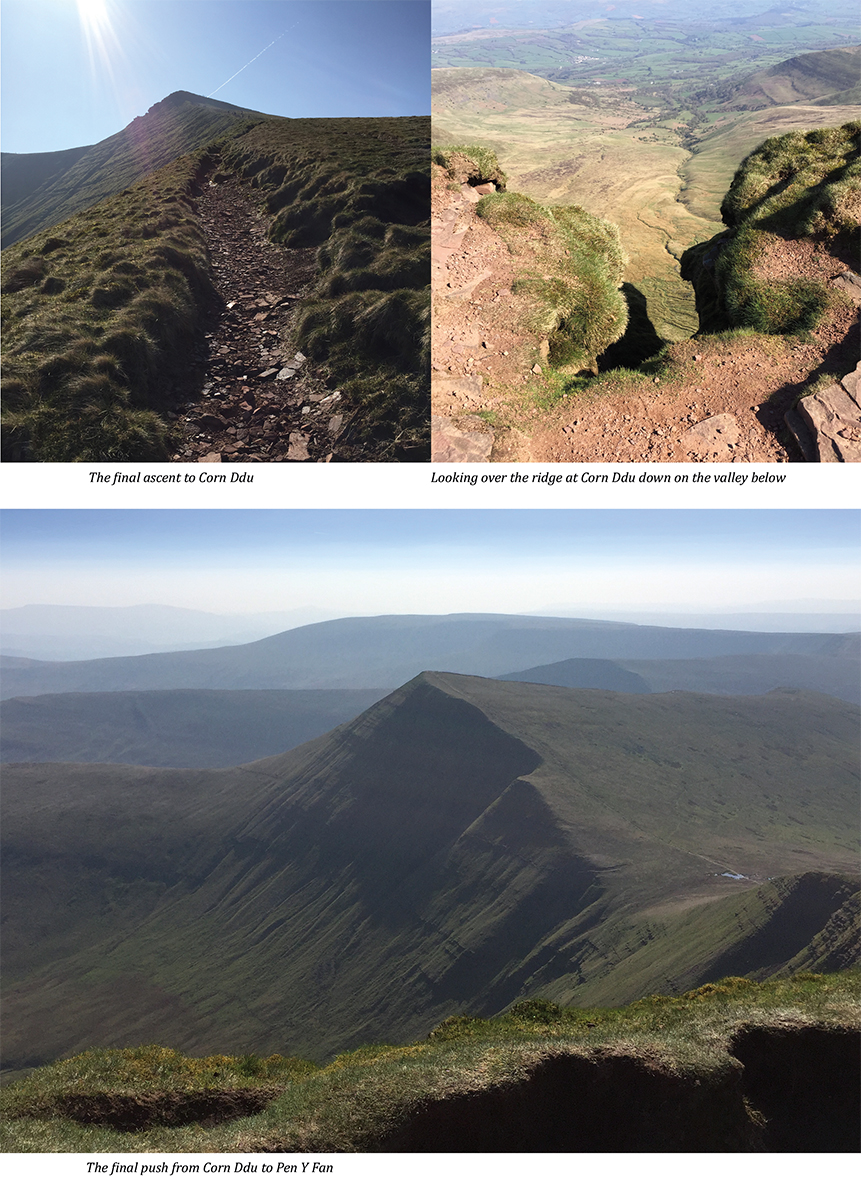 Once there you can glory in the view as the 360 degree vista is simply stunning… You feel like giving it a round of applause nodding your approval and saying, ‘Yeah, good effort Mother (and Father) Nature. Nice work.’ You’ll definitely need a sit down now, maybe a cuppa and a selfie and also an energy bar, or as I prefer to call them, pork pies. Then, once recharged you simply retrace your steps. Once off the ridge and past the obelisk, look out for the path which leads you down towards the banks of the lake for a closer look and then follow the path down the valley from there. The detour I mentioned earlier is to the right a little further along when you return to the stile. Follow the fence towards the right which takes you down for a view of two sets of waterfalls on the infant streams that run parallel with each other cutting a sharp slice right through the valley floor. Then just rejoin the path and return to the car park. 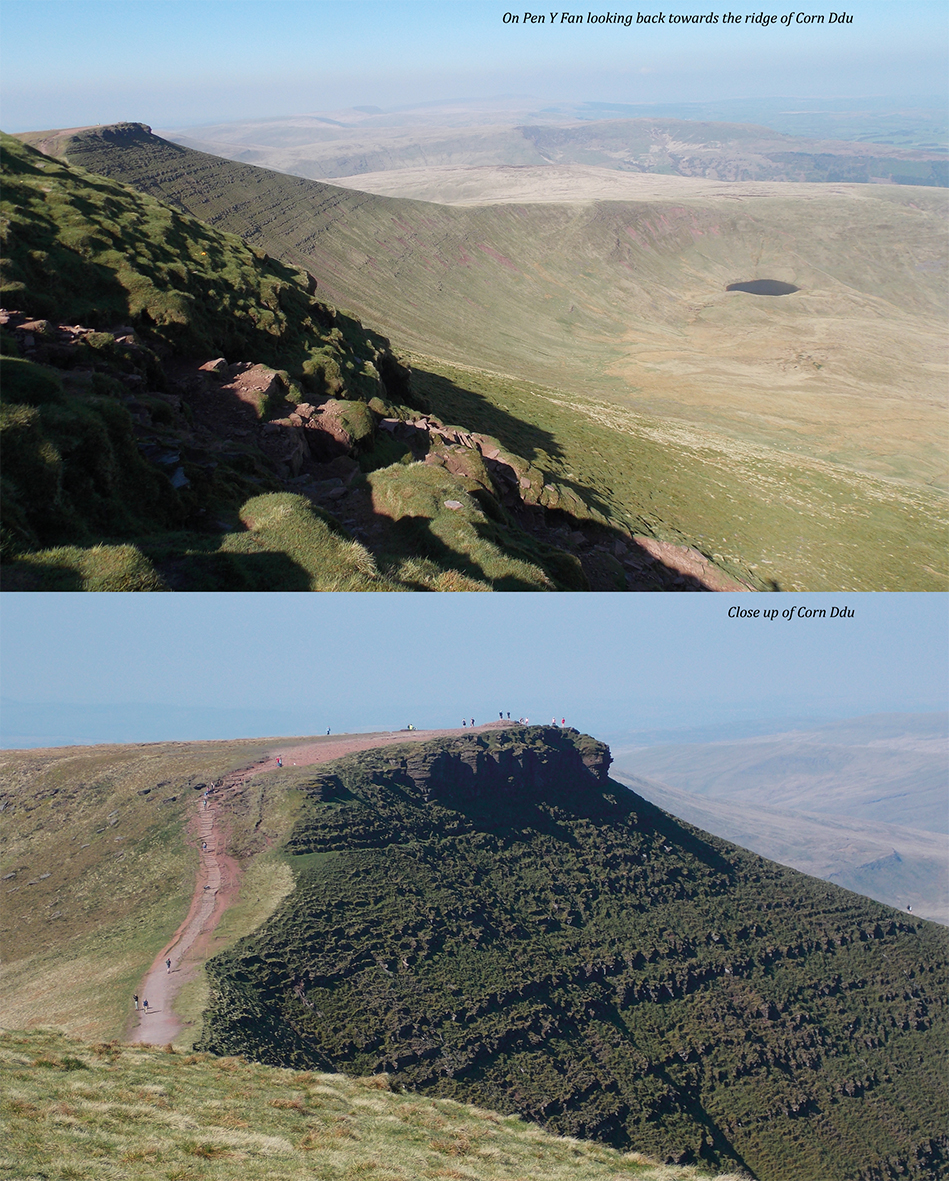 I recommend you plan this walk when the weather is favourable to get maximum benefit from the experience. The most rewarding time that I’ve done it was at sunrise on midsummer’s day a few years ago (take either the Pont yr Daf/Storey Arms paths as they are more reliable and much easier to follow in the dark). The conditions were perfect without a cloud in the sky. Although I had to get up at ridiculous o’ clock, passing early morning revellers munching on their kebabs in their taxi queues, it was so worth it. It was simply stunning. So, go on, be daring and go for it! And besides, it’ll be a damn sight easier to find a parking space.

Start: As indicated on map

Dog Friendly: Yes but best kept on leads as there are precipitous drops and sheep!

Children friendly: Mm, they need to be fit, so try the Pont yr Daf route

Refreshments: Various catering trailers along the A470