Emlyn’s film choice for June is set on the Jurassic coast line of Dorset, but this isn’t a dinosaur film, it’s a story of a marriage that fails before it even gets started.

We’re well into summer movie season now, a time of year dominated by superheroes, dinosaurs and many, many explosions. And while Avengers: Infinity War is great (and it really is quite spectacular) sometimes you need something a bit smaller, more intimate, and with fewer moons being thrown at Iron Man’s face. In that regard, you could certainly do much worse than On Chesil Beach. 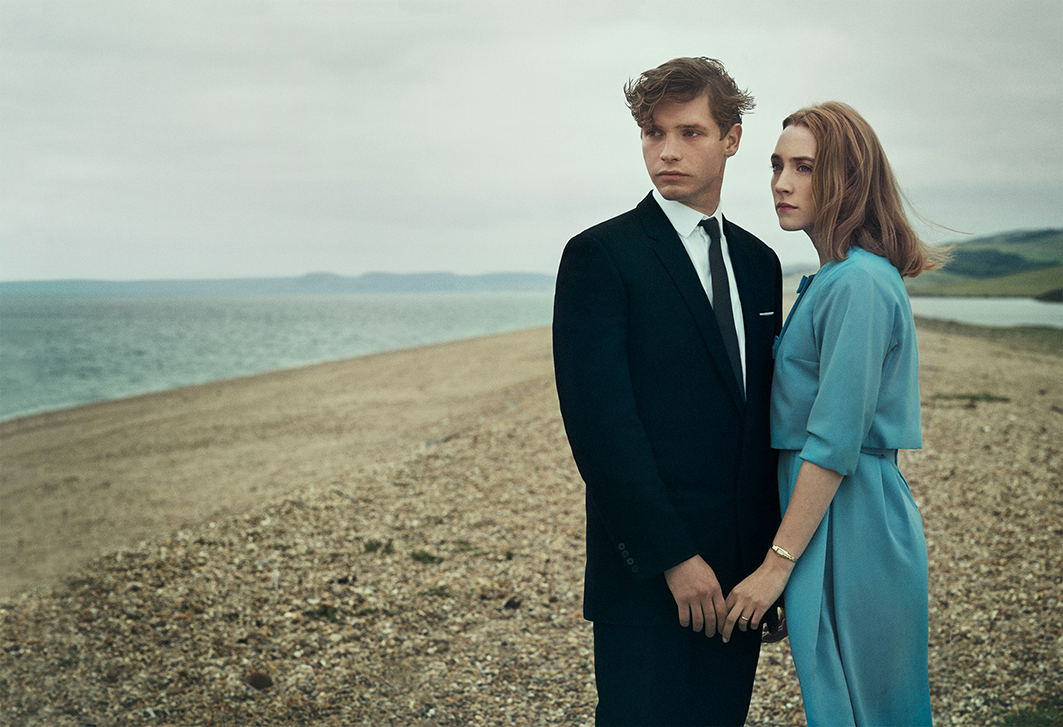 Based on Ian McEwan’s novel, which he himself adapted for the screen, it’s the story of Florence (Saoirse Ronan) and Edward (Billy Howle), two newlyweds honeymooning on the titular beach. We follow their fateful first day of marriage as – you guessed it – things don’t go entirely well, intercut with flashbacks to their earlier lives and how they fell in love.

It’s the kind of film where the bulk of the heavy lifting comes down to the actors. While there’s a solid supporting cast, this is essentially a two-hander between Ronan and Howle, both of whom are fortunately on excellent form. Ronan is particularly if unsurprisingly terrific, off the back of her Oscar nomination for Lady Bird, but Howle acquits himself admirably as well. They’re both playing satisfyingly multi-dimensional, complicated characters that are at times, quite unlikable, and it’s to their credit that they’re still able to command the audience’s sympathy and help us understand the sometimes questionable choices they’re making.

Book purists can presumably rest easy (full disclosure: this writer has not read it) given that McEwan wrote the screenplay, which, like its characters, offers no easy platitudes to the thorny issues it grapples with, ultimately acknowledging the uncomfortable fact that some things just aren’t meant to be. Set in the early 1960s, it’s an interesting look at a very different time, even if its relatively narrow scope doesn’t give it too many options for examining it in depth.

If there’s a flaw in the film, it’s that it does feel somewhat detached and distant, seemingly content to keep us at arm’s length rather than allowing us to get fully caught up in the rolling emotions the characters are experiencing. There’s no doubt that this is to some degree deliberate, given Florence and Edward’s naivety and discomfort around each other, and it works well at approximating their moods  and  feelings: despite being married, there’s still a great deal they don’t know about each other. They’re nervous and even a little frightened, uncomfortable with expressing their true emotions (at first, at least), and quite unprepared for the journey they’ve decided to undertake together. But while the film’s distancing effect does do that job, it never really lets us into the characters’ minds, meaning that we don’t engage with them quite as strongly as we ideally should.

It’s a pity, to be sure, but hardly a ruinous one: it doesn’t derail the film by any stretch of the imagination, and there’s still plenty to recommend here. The flashback sequences are particularly charming, with Florence rapidly and endearingly becoming part of Edward’s family life: the warmth and humour of these scenes contrasts very nicely with the comparatively chilly honeymoon section, effectively illustrating how much getting married can drastically change things. The colour palette reflects this as well, with lots of warm, rustic browns and greens in the flashbacks set against the slightly drab hotel, slate-grey sky and pebbly beach of the honeymoon.

So even if it all ultimately doesn’t quite click into place as well as it could, it still has a great deal going for it. It’s an extremely well-written examination of how a marriage can go wrong, and how the social mores of the time can have a disastrous effect on one’s psyche, brought to life by a pair of very talented young actors that you should definitely keep an eye on. On Chesil Beach could have been better, but it’s still a very accomplished piece of work that provides a welcome break from the summer’s usual city-smashing shenanigans.