Last month saw three local restaurants receiving recognition for being the best in Wales. Firstly Gigi Gao’s Favourite Authentic Chinese Restaurant was voted the best Oriental restaurant in Wales in the Golden Chopsticks Awards. It came as no surprise to me as I have been constantly telling people that Gigi’s food was different from any other Chinese restaurant. If you’ve only had the heavily MSG’d gloopy sauced dishes found in most Chinese takeaways then you are in for a complete revelation at Gigi’s. Her philosophy is healthy eating; lots of steamed dishes and certainly no MSG. The steamed pork dumplings are so moreish that a portion of ten is selfishly kept on my side of the table – and woe betide anyone that comes near with their fork. Please don’t ask me if I love you enough to give you my last dumpling – you won’t like my response.

Then in the Food Awards Wales 2018 we had two Swansea winners – the Plough and Harrow in Murton was awarded the Best Gastro Pub and The Oxwich Bay Hotel, the Hotel Restaurant of the year. 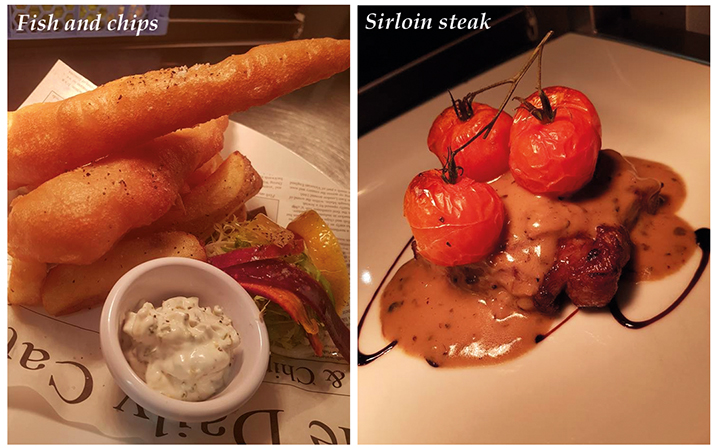 We popped into the award winning Plough and Harrow for an impromptu supper last month – you can eat in the restaurant or select from the bar menu. As it was a quick bite on the way home the bar options sufficed.

All are priced at £10 and include sirloin steak, battered cod, beef pie and macaroni cheese, most of which are accompanied by triple cooked chips. If you’re going to have battered cod it has to be with chips – it’s the law. The best part of fish and chips is the batter – crispy, golden and with a satisfying crunch. When I buy fish and chips to take away I’m always disappointed in how the batter very quickly becomes soggy once the fish has been wrapped in paper or boxed – it simply gets steamed. So part of the pleasure in eating fish and chips in a restaurant is the crispness of the batter – and one of the better parts of the P&H version is that it was served as two large goujons making the ratio of batter to fish even greater. The fake newspaper that it was served on added a quirky touch.

The 4 oz sirloin steak was cooked rare as requested and came with a little pot of pepper sauce – the dinky mesh pot held the chips. If I was to be critical my only quibble would be the portion size – would it satisfy a hungry man – probably not – but for a light lunch it would be fine.

I’m looking forward to a trip down to Oxwich Bay to see what makes it award winning – I’ll keep you posted.

So with three award winning places to eat in the area the other restaurants can’t rest on their laurels – let’s hope it raises the bar and that we have some more winners next year. 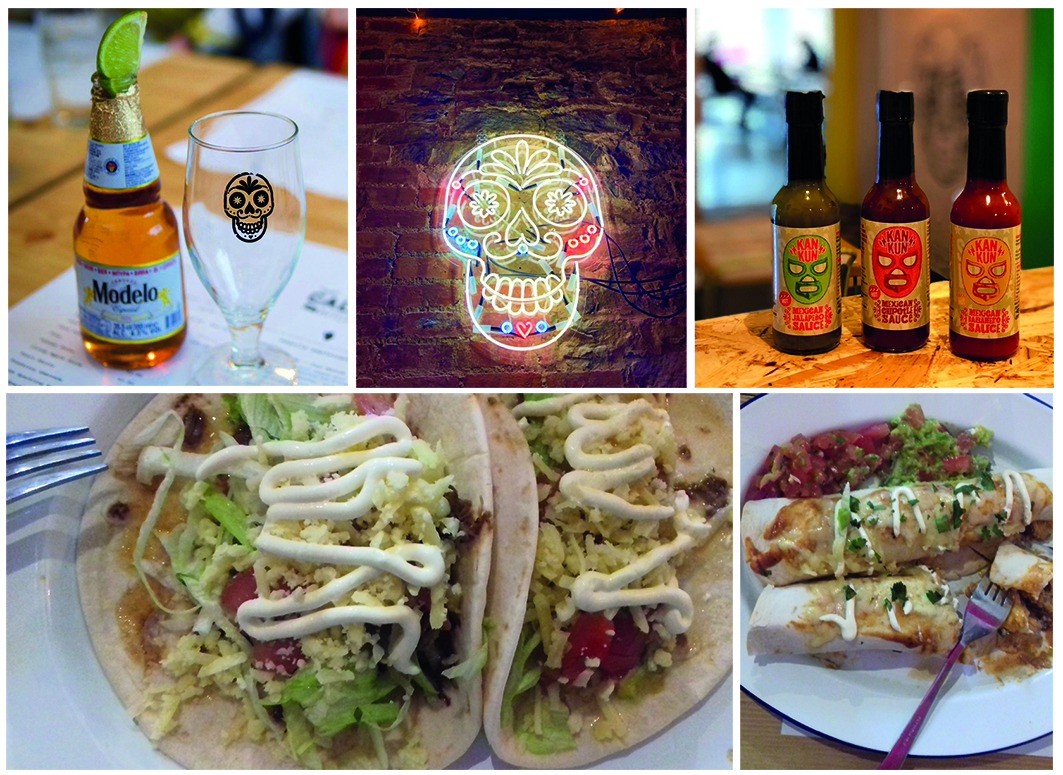 Many years ago when I lived in the South East of England there were Tex Mex restaurants aplenty. Sizzling skillets of fiery chicken and beef were served with towers of warm tortillas and pots of guacamole, salsa and soured cream, for you to assemble your own wraps – all very good but a bit contrived.

When I returned to Swansea I missed my chilli hit, so I was really happy to see that a truly authentic and independent Mexican restaurant had opened up in Uplands. Calaca Kitchen has no signage apart from a skeleton on the window and a signboard on the pavement ‘ Burrito Diversion’ – but if you’re a reader with a long memory it is in the old Bryn Lewis menswear shop latterly Steam coffee shop and more recently Squirrel.

Calaca is the Mexican/Spanish term for a skeleton commonly used as a decoration in the Day of the Dead ceremonies. The décor is very simple with wooden tables and chairs more often seen in school classrooms – but thankfully it is the food that’s the stand out feature here. The menu is very limited but has everything that you would expect – tacos, enchiladas, nachos and burritos. I love that burrito translates as little donkey – apparently when folded, the end of tortilla resembles a donkey’s ear.

The idea is that you choose your favourite base and then select from chicken, prawns, shredded beef or pinto beans. My enchiladas with chicken were two soft tortillas and filled with onions, black beans, green chillies, Monterey Jack and Cheddar cheese, coriander, soured cream and of course chicken. They were pleasantly spicy – not knock your head off hot, but if I’d wanted to feel the kick of a mule I could have added any of the hot sauces that were on the table – but they did come with a warning!

The tacos were similarly filled but this time with the addition of spicy shredded beef – both tasted as if they had been freshly prepared by a chef that knew how to balance flavour and spicy heat. The choice of drinks includes authentic Mexican beer and a huge range of tequila – the perfect food drink pairing.

Service at Calaca Kitchen is superb – the guys here are so well informed and are keen to explain how to order if you are not familiar with Mexican cuisine. Be warned that they don’t accept card payments just cash – but there are plenty of cash points close by. 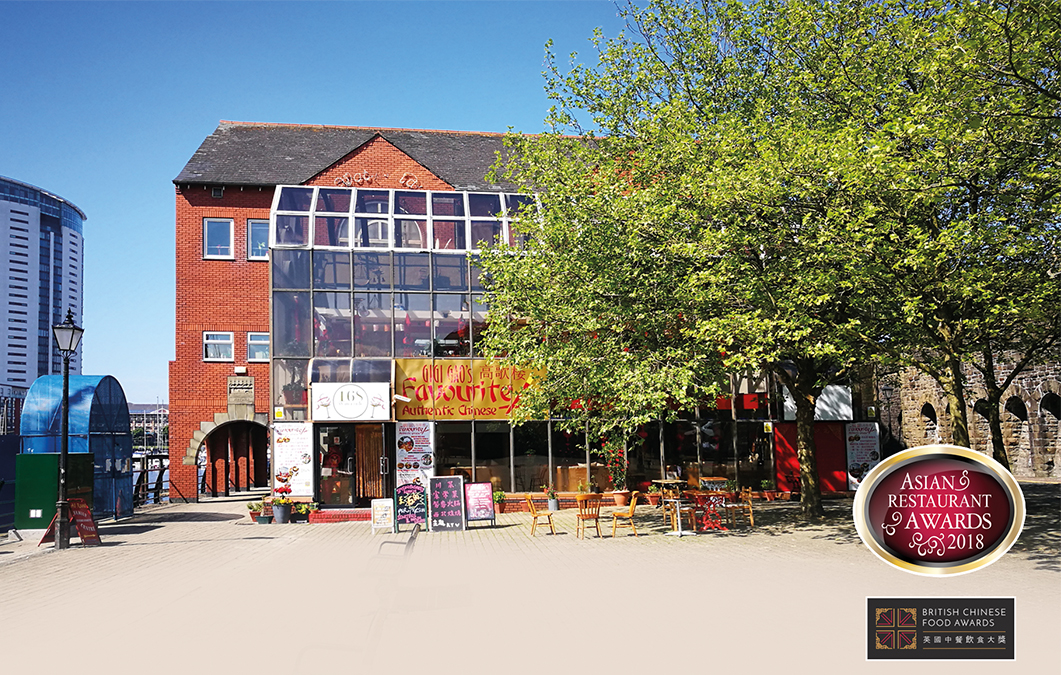 Following recent success at the Golden Chopsticks Awards in London where Gigi Gao’s Favourite Authentic Chinese was awarded the Best Oriental Restaurant in Wales, (see our May issue), it seems that Spring 2018 has been the catalyst for an avalanche of accolades for the Swansea based restaurant. Within the last month alone Gigi Gao’s Favourite has been nominated for two further major culinary awards in London, both of which come to fruition in November this year.

In late April the msg-free Chinese restaurant was judged as having the most authentic tasting Chinese cuisine outside London, as evaluated by a represent-ative judge from the Asian Restaurant Awards/Asian Curry Awards. Not only was the judge bowled over by the cuisine and the décor, but he made mention that the restaurant clearly had a huge fan base as the organisers had already received many votes in support of Gigi Gao’s….and the restaurant wasn’t even aware they’d been nominated!

Then during mid May, the restaurant was nominated for the Best in Wales category at the British Chinese Food Awards, again a high profile awards event in London. This awards event is in its second year and the restaurant is now awaiting a visit from an anony-mous mystery judge. Says owner Gigi Gao….

“It’s all a bit nerve-wracking to be honest as a judge will turn up unannounced anytime between now and about October and so we have to be on our toes the whole time! But in the meantime, we still need the public to vote!”

For both above mentioned awards you can vote for Gigi Gao’s at www.favouritechinese.co.uk

And if you think that is enough for one year, then you’ll be surprised to learn that the accolades don’t end there!

In early May, Gigi Gao’s restaurant was chosen to represent Wales at the signing of the Inaugural British & Chinese Tea Culture Art Festival in London on Friday 18th May. This is a nationwide cultural collaboration between the UK and Chinese govern-ments to help educate the public in respect of all aspects of Chinese culture and particularly that of tea. The cultural Chinese dance and tea events organised by the UK Chinese Dance & Culture Association (the people responsible for putting on London Chinatown’s Chinese New Year celebrat-ions each year) will be held throughout the UK including London, Cambridge, Swansea, York and Edinburgh and have garnered Parliamentary support alongside international press coverage throughout China, and at the forefront of the festival is Gigi Gao’s Favourite Authentic Chinese! The Tea Culture Festival event is scheduled to be in Swansea in late June.