Earlier this year I was contacted by a lawyer from Guernsey. Amy Richardson wrote to tell me just how much she loved visiting Gower and South West Wales following the untimely death of her husband. Here is Amy’s story – I’m sure it will touch you in the same way that it did me. 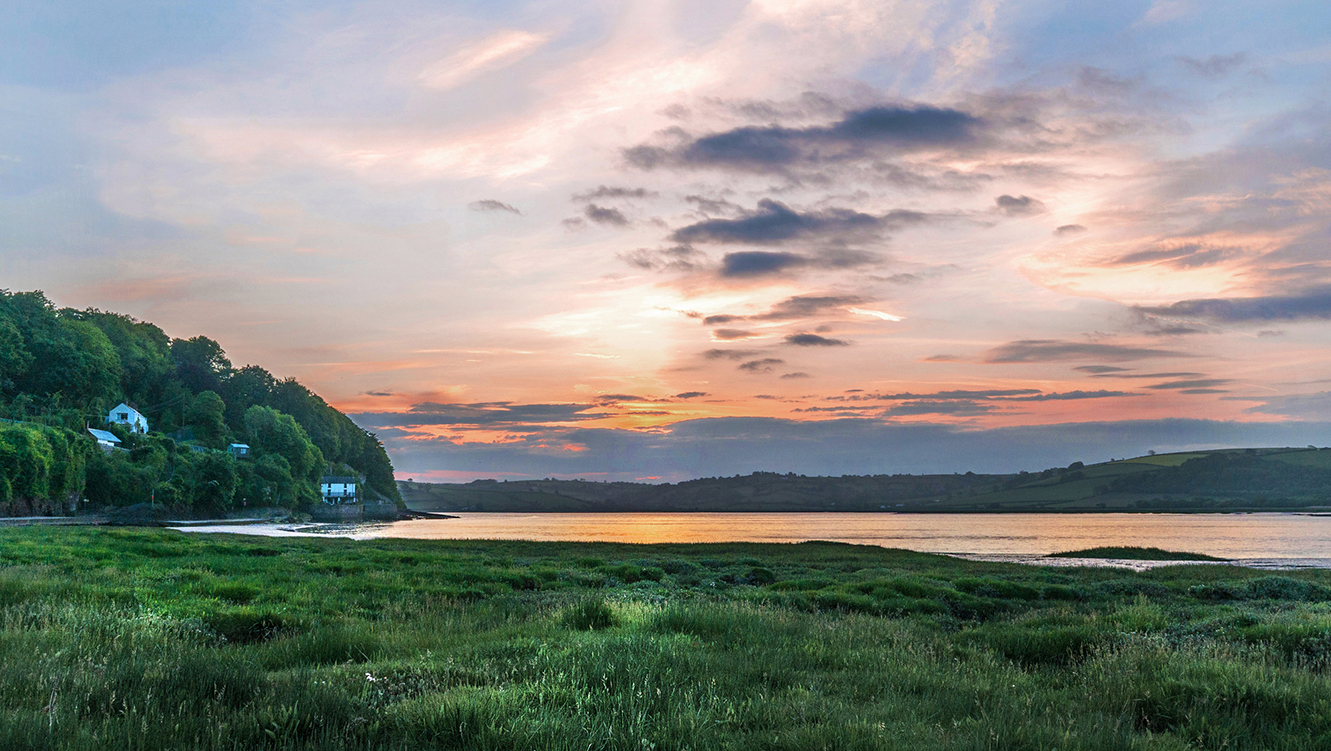 More specifically I’m at Laugharne and I’m happy. It’s February, but rather than the bitingly cold drizzly rain that seems to have dogged my steps all winter, instead I’m sitting on a bench being warmed by a special kind of hazy sunshine that only seems to exist in this part of the world. I’m half way into the Dylan Thomas birthday walk, but, being the wrong side of athletic, I’ve sunk down to rest my wellington clad feet on a bench overlooking the estuary. I can’t hear anything other than the quiet babble of water lapping a shore line I can’t quite see.

For me, as a busy criminal lawyer and single mother to a four year old, the soundtrack to my day is a thousand emails pinging urgently, my phone screaming for attention, judges grilling me on points of obscure law, clients asking a million questions that I don’t know the answer to, my daughter asking why she can’t have an ice lolly for breakfast and a plea for reassurance that I won’t leave her alone, something she cannot bear. There doesn’t seem to be a wi-fi signal in South Wales, usually this would fill me with dread, but, it doesn’t here.

Instead, all I feel is a deep sense of warmth and peace. The stillness which seems to wrap itself around my friend and me like a quilt as we sit together on that bench, doesn’t come with its usual gnawing of fear. The silence here is welcome.

I’m at Laugharne and I’m happy.

And, I didn’t think that I would ever feel happy again.

In 2016, I had it all. I was married with a beautiful baby daughter, a successful career and a home of my own. Was I smug? Well, a little. Did I live a champagne lifestyle? You bet, and I had the designer sunglasses to prove it. Did it have a happy ending? Well, not quite.

On April 20th 2016, my husband was diagnosed with bowel and liver cancer. He had been admitted to hospital with stomach pains, and within 12 hours of admission, I was informed (with no preamble or preparation) that the cancer was terminal.

I didn’t feel shock, or sadness, or anger. I didn’t ask why, or how. I just nodded. He was whisked away for surgery, and I returned home to make beans on toast for my daughter and to try and piece together a strategy as to how I would cope (it was interesting, how it went immediately to “I” and not “we”). I was sure it would all be just fine.

It wasn’t. My husband died on 19th July 2016, not 10 weeks after his diagnosis. It was the most cruel and traumatic death, full of pain and fear. For months after it I was numb, I could function and talk, but I felt nothing, other than a deep anxiety that everyone around me would die and that everything would end. I took no pleasure in anything other than my daughter. I didn’t go out, except to work where I was at best a robotic presence. I stopped listening to music. I just stopped being.

So, it was a surprise when a friend invited me to spend some time in South Wales. I had been there when I was very little (my grandad was Welsh, this being confirmed my his renditions of “Land of My Fathers” and his insistence on always wearing something red), but my recollection of these trips seemed to melt into one long walk over uneven grassy cliffs, the end result often being stung knees and hot, sticky tantrums. But I did, however, remember a sense of freedom and magic, the half-forgotten stories and fairy tales, days by the sea and in the woods. So, I agreed to take some time out from my “life”, and travel for a weekend to God’s country. 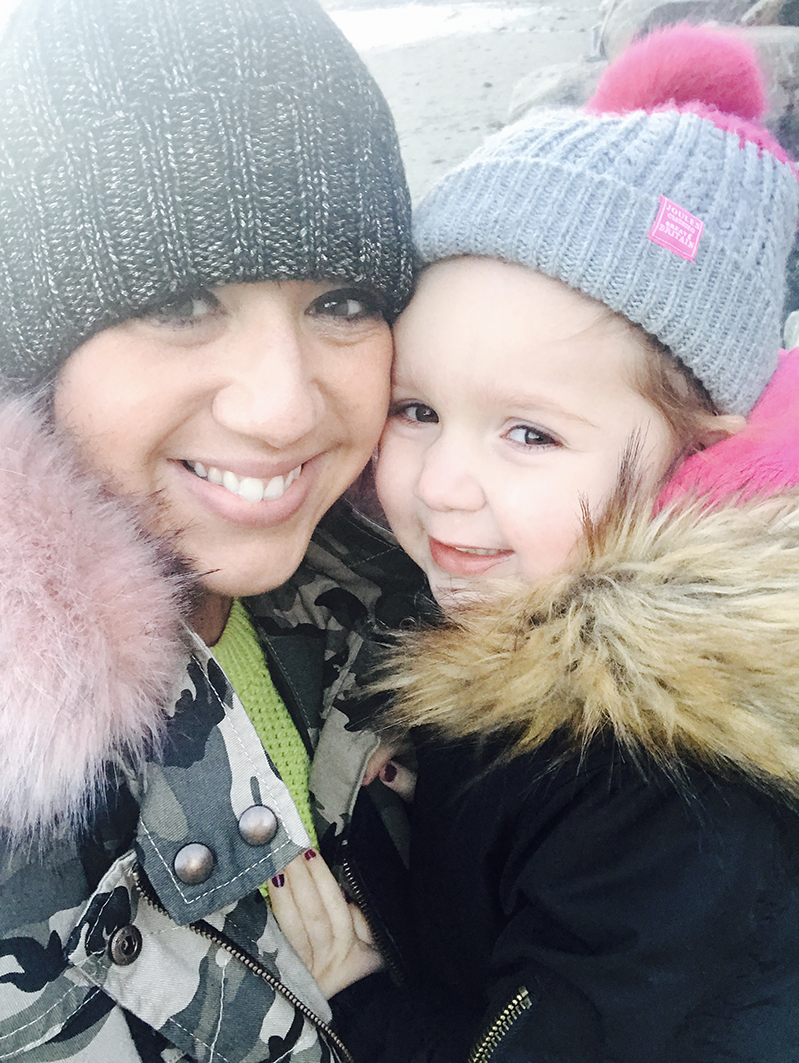 Amy with her daughter Livia Faye

I arrived in South Wales in the autumn, which was always my favourite season, mainly because of the light. My first night there I stuck my head out of a little skylight in the roof of the room where I was staying. I could smell the watery fresh night-time air of the Gower estuary. I could hear precisely nothing. There was a sharp and clear coolness in the night, and I could see the stars. Not just see them, but appreciate them, twinkling quietly away. That first night I wasn’t frightened by the quiet and I slept untroubled by nightmares or intrusive thoughts.

And we walked. Good Lord did we walk. And talk. I could cry for the first time with no judgment or expectation. It was cold, and the Peninsula was battered by rain that weekend, but we battled on like hardy little marsh ponies. I felt calmer, more invigorated and I remember looking out at the grey sea from the cliffs and feeling something stir, as though there was something inside me being woken up after a particularly troubled night sleep.

So another trip was organised, and I again found myself back in Gower in November. The plan was for me to relax, and try to let my friend and mixed-up brain get some rest. The issue with grief is that it often doesn’t manifest itself in weeping and lying on a chaise longue. It often gets pushed to the back of your mind as you work through the day, and the evil grief fairies only come out to play games in your head in the dark hours of the early morning, leaving you exhausted and confused. I hoped that some time back in Wales would help – away from work and clients and the unrelenting responsibilities of single parenthood.

In a fit of adventurous spirit, my friend and I decided to take a trip to Castle Coch and Carreg Cennen Castle. One is a fairy tale castle, still beautifully intact and set in the trees by the village of Tongwynlais, the other was a ruin perched high up on a hill within the Brecon Beacons. Both involved a good deal of walking, and the forecast was for rain. The only footwear I had was knee high suede boots and my only protection from the elements was a small red cape. What could possibly go wrong? And so, with fairly robust optimism, we set a course for a day of castle exploration.

Despite being aged 30 during this trip, I have no shame admitting that, within the walls of Castle Coch I spent 3 hours pretending to be a princess, much to the perplexity and politely disguised irritation of my friend / guide. I laughed, thinking that if my husband was alive, this would have amused him as he always pointed out I lived and acted like a celebrity, whilst he just pottered in the background. I realised that this was the first time I had thought about him outside the context of cancer.

My choice of dress for our ascent and traverse of Carreg Cennen – suede boots, thin shirt and a fashionable but impractical cape were not, as it turned out suitable for keeping out the freezing wind that whistled around the ruins. This castle was older, wilder, higher, more imposing, more rugged, harder to get to and even harder to walk round than Castle Coch – and I loved every second I was there.

I’d been working on my fitness since being an unexpected widow had left me somewhat resembling a collapsed jacket potato due to a diet of Coca-Cola, monster munch, Twix and chips – so I was slightly dubious about my ability to conquer the not insignificant climb. But conquer it I did, and was rewarded with stunning views of the country-side. That clean and crisp air I had felt on my first night in Wales some months earlier filled my lungs, and made me want to run and shout and jump, the same as that little girl who had come to Wales 26 years earlier.

The more time I spent in Wales, the more I found myself allowing moments to remember and heal. Time often seemed a luxury in my everyday world of hussle and bussle, but here on my beloved adopted Gower Peninsula, time often seemed to mean nothing – until I had to leave, when time suddenly meant everything, and there wasn’t enough of it.

There was a boat ride from Oxwich to Worms Head, where the waves where huge and seals bobbed in the churning grey water. There were bacon sandwiches and mugs of hot chocolate at Langland Bay, sitting in the sunshine watching families play and laugh in the sand below the café. There was the spectacular view of the cliffs and beach and caves at Rhossili Bay. There were ice creams and fish and chips in boxes, all eaten while watching the sturdy marsh ponies.

These memories should be bottled. They should be placed in the most beautiful of boxes, and brought out like a treasured ornament to be marvelled at when I feel the sadness rise up again.

I’m on a bench in Laugharne and I remember the previous eighteen months. South Wales has become so precious to me. I feel a warmer breeze rustle the leaves by the bench, and can smell the freshness of the ground. Earlier that day, we had visited Dylan Thomas’ grave, and looked out over Laugharne and the hills. Anyone would be forgiven for thinking that my own loss would make me shy away from visiting a grave but it didn’t. The simple white wooden cross marking Dylan’s final resting place is also his wife Caitlin’s grave. She of course outlived her husband by many years. Did she wait, I wondered, as I shielded my eyes from the bright sunlight. And more importantly, did he wait for her? I doubt anybody could answer these questions.

On that bench at Laugharne I, who spend my life talking and communicating have nothing to say. No words seem appropriate for how crucial and special this place has become in my own journey away from grief. The landscape, the people, the air, the light, the magic, the myths, the stones, the leaves, the trees, the waves, the birds and the sky of South Wales, all perfect pieces of a luscious jigsaw of jumbled feelings.

I feel a slight squeeze on my arm, and realise that it’s my friend, my dear, dear friend, who is as much a part of this quest than the land itself, is telling me we need to make our winding way back to the car.

The light seems to be dipping, even though it’s not yet evening. I turn and take in one last look at the estuary and breathe in that cool and welcome air of sea and leaves and sand.

“Diolch”, I whisper the words quietly, knowing only the birds will hear.