A MYSTERY IN SINGLETON PARK

At 250 acres, Singleton Park is the largest park in Swansea. Originally it was known as the Singleton Estate and comprised of 12 farms; it was owned by the Vivian family. In 1919 the estate was purchased by the then Swansea Borough Council and in 1920 Kew Gardens trained gardener, Daniel Bliss began to transform it into the wonderful open space that we know today.

In 1918 an event occurred that would make a good story for Agatha Christie’s Hercule Poirot to get his ‘little grey cells’ working on.

Using primary sources[1] let’s see what we can piece together.

On 5 June 1918, a complete skeleton of a man was found in a secluded part of the woods on the Singleton Estate, following the discovery of a skull by two schoolboys on the night before. Imagine the mother’s surprise and shock, when she was making her son’s bed to find a skull. She told her son to take the skull to the police. Swansea 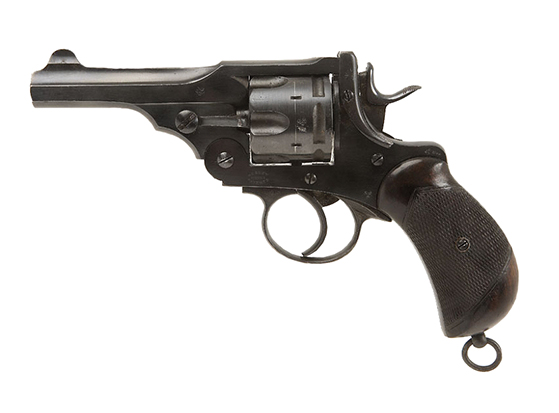 Police passed the case on to the County Constabulary. Sergeant Wood, made further investigations at the scene, where he found lying near the skeleton a revolver, an empty medicine bottle and a phial of capsules, along with two English sovereigns minted 1899 and a farthing. 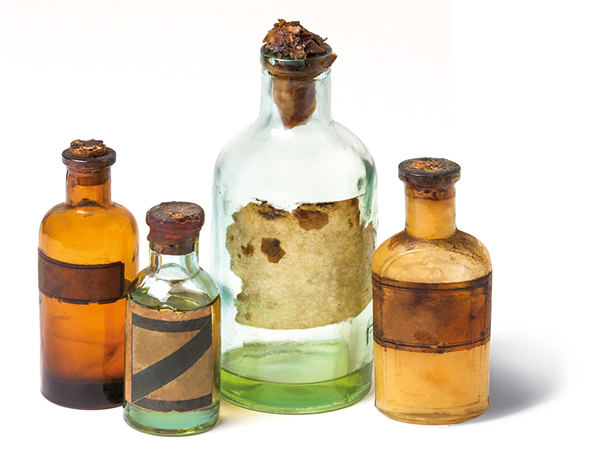 The secluded wood was 100 yards from Brynmill Lane and 400 yards from the Mumbles Road – the nearest building is Singleton Lodge.

It seemed that this mystery would never be solved as the only clue that the police had to go on was the empty medicine bottle which bore the name Mr. J. H. Kent. Mr J. H. Kent, of 45 St. Helen’s Road came into business in April 1908; he supplied poisons in very distinctive bottles.

Sadly the trail goes cold here as an inquest was heard, but unfortunately the conclusions were not printed in the local papers, and the inquest papers haven’t survived due to a flooding in the local coroner’s office. Trying to obtain a death certificate is next to impossible without a name.

Where else could we turn to try and establish who this man was? During the latter period of the Victorian era, a chemist’s shop was intensely alluring, packed full of interesting smelling lotions and potions in bottles of all shapes, sizes and colours. The register which the chemist had to keep, would have details of every prescription dispensed, detailing the name, address and profession of the recipient. The Pharmacy Act, 1868, stated that drugs could only be sold if the purchaser was known to the seller or an intermediary known to both. All drugs had to be sold in containers with the seller’s name and address. All these poisons had to be entered into the Poison Register. Unlike today, there was a more laissez-faire attitude during this period, when there were a number of toxic substances available, which included arsenic, belladonna, opium and laudanum. Patients would have to have had a strong constitution to take such remedies and might have felt a lot worse for taking them.

What about the phial of capsules that was found? During this period, every pill, tablet, lozenge and cachet was handmade by the chemist and his assistants. However capsules, were more fiddly to produce. If Mr Kent’s registers had survived we might have been able to identify the man, sadly it will remain a mystery. 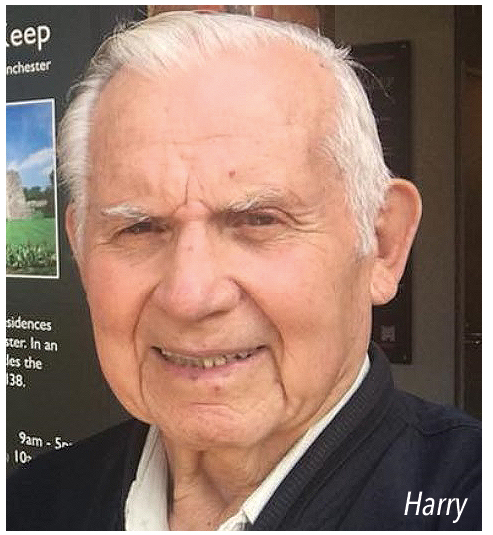 Harry Norris is an 88 year old veteran of the Suez Crisis in 1956, a subject that I hope to return to in a later article. If you or any of your family were involved in this short lived conflict please drop me a line.

I asked Harry if he had an ancestor, Charles Norris buried at St. Peter’s Church, Cockett. Charles had been a casualty of the First World War; I showed Harry a photograph of the headstone, (pic below left) which I had taken some time back. Harry said that it was his uncle but that they were yet to find the grave. Harry also told me that Charles Norris’s name is also inscribed on the War Memorial, Mumbles Road. 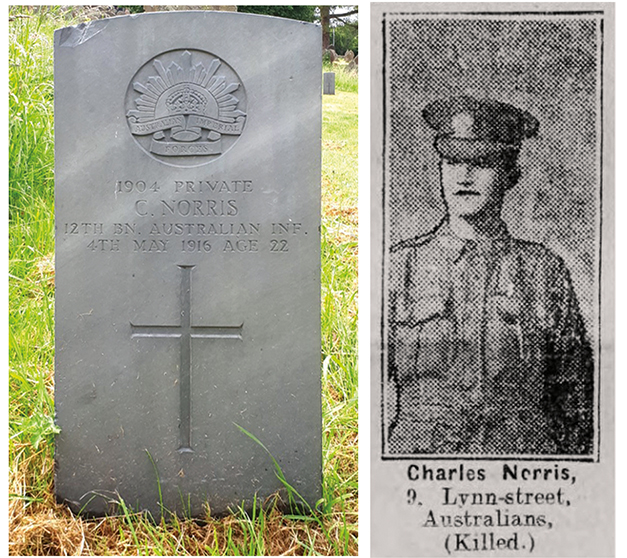 Charles was born circa 1893, in Buenos Ayres, Argentina, while his father, William Norris, was working the Copper Trade Route from South America to Swansea. Four of the Norris children were born in Argentina. The family emigrated to the UK, on board the Royal Mail Steam Packet Company, Clyde, a wooden, paddle pro-pulsion ship. Departing from Ensenada, Mexico and arriving at Southampton on 1 July 1901, the sea voyage having taken several weeks to complete.

At the time of the 1911 Census the family are now living at Lynn Street, Cwmbwrla, Swansea, and Charles is a General Labourer working within the Fuel Works. What is interesting is that the children who were born in

Argentina are listed as “Naturalised British Subject”. Following the British Nationality Act, 1772 children were classed as British subjects as was their father, though on the census, the Norris children’s year of naturalisation is missing.

In 1912, Charles emigrated to Adelaide, Australia, where he was employed as an Fireman. The First World War broke out in August 1914, and Australia as part of the British Empire was automatically involved. On 16 January 1915, Charles joined up to serve with the 12th Infantry, 5th Reinforcements, Australian Imperial Force.

He listed his place of birth as Swansea on his Attestation Papers!

He saw action at Gallipoli, and later Charles was stationed at Westham Camp, Weymouth, where he was involved in a motor car accident, receiving a fractured skull and other injuries. After the accident Charles was taken to Sidney Hall Military Hospital[2], Weymouth (pic above right), but sadly he died on 4 May 1916. He was finally brought home to Swansea, where he was buried at St. Peters Church, Cockett (pic above left). Charles is also commemorated on the Australian War Memorial, in Canberra. 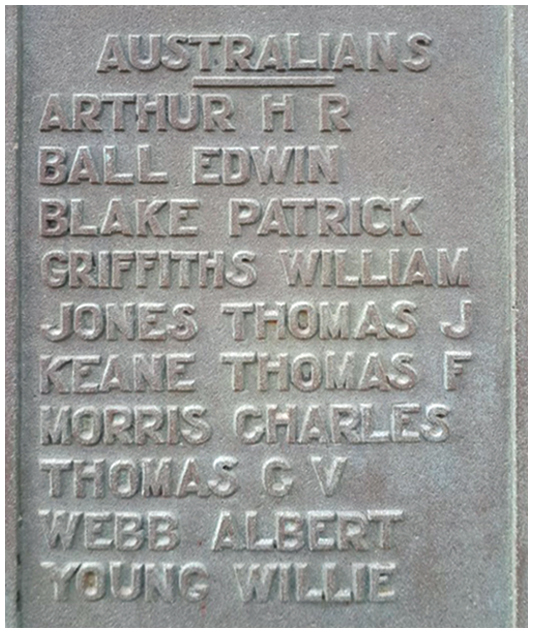 Charles Norris’ name was added to the panels of the Swansea Cenotaph, on Mumbles Road along with the other nine Swansea men who fought with the Australian Imperial Forces. Sadly Norris was added as Morris. You would think that a simple spelling error could be rectified but this has not been the case.

I have made enquiries to Coflein[3] and CWGC[4] to see if they could help but they don’t have responsibility for the care and maintenance of the memorial. The CWGC advised me to call the War Memorial Trust which is a registered charity, with the purpose of protection and conservation of war memorials in the UK. Apparently this isn’t an unusual enquiry.

July 1923, saw the passing of the Act, of War Memorials (Local Authorities’ Power) Act, 1923, this Act, allowed “(‘local authorities’) under certain circumstance to maintain, repair and protect war memorials within their council boundaries” – but not to alter text.

The Act was amended after the Second World War, allowing local authorities to add further names of those killed during that conflict.

1 Sidney Hall Military Hospital, Weymouth, has now been replaced by a Asda Supermarket