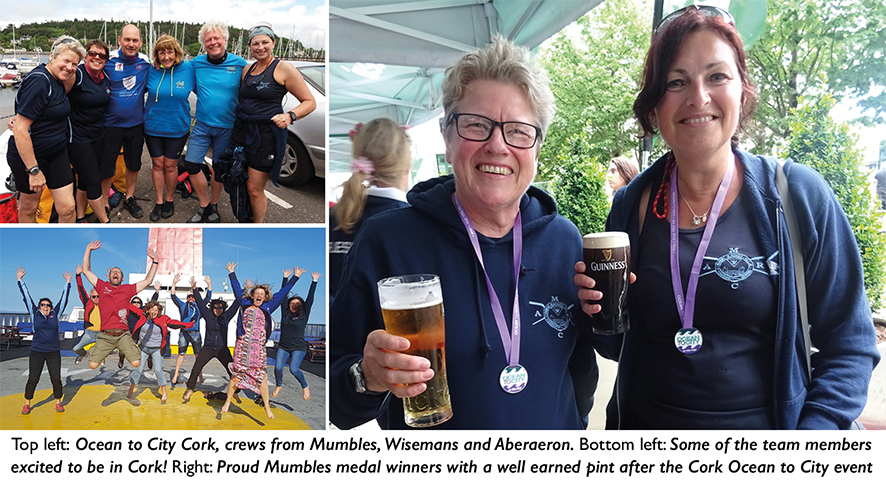 What a stunning summer we are having. We are so lucky to live here in Swansea Bay – and there is no better way to enjoy this hot weather than being out on the sea, which is exactly what Mumbles Rowing Club has been doing.

Our race season begins early spring and finishes end of September. However we love the sea that much and some of us are a bit mad so we row throughout the winter too, brrr! Watching the fireworks whilst rowing in the middle of Swansea Bay last November was spectacular.

Besides rowing around the coast of Wales we do like our rowing trips away. Last year we were in Brittany; however this year at the beginning of June we went to Cork in Ireland to compete in the Ocean to City race. An Rás Mór (The Big Race) is Ireland’s very own long-distance rowing race. Mumbles Rowing Club were joined by teams from fellow Welsh Sea Rowers – Wisemans Bridge Rowing Club, Porthmadog Rowing Club and, Aberaeron Rowing Club to take part in Ireland’s premier rowing race which attracts over 600 participants in more than 200 craft annually.

An Rás Mór started in 2005, and has grown from its origin as a race for traditional fixed-seat boats into an all-inclusive rowing and paddling event, embracing everything from traditional wooden working boats, currachs, skiffs, gigs and longboats (our boats) to contemporary ocean racing shells, kayaks, canoes and even stand-up paddle boards. Ocean to City is the flagship event of the Cork Harbour Festival.

An Rás Mór is much more than just a race…it is a test of endurance, a personal challenge and a shared effort. All our Welsh teams were certainly challenged as it was a hard row down the river against the wind and tide, then extremely choppy once out of the estuary and into open sea. But then after the buoy turn, the wind and tide was behind us and the row back was a bit easier. After the race, Caroline Dance of Mumbles Rowing Club said, “It had been a long hard fast row, but as we passed the crowds of cheering people on the banks of the river on our approach to Corks City Centre our spirits rose and speed increased as at long last we slid over the finish line triumphant”.

All Welsh teams came home with medals for participation and should feel extremely proud of their achievement. 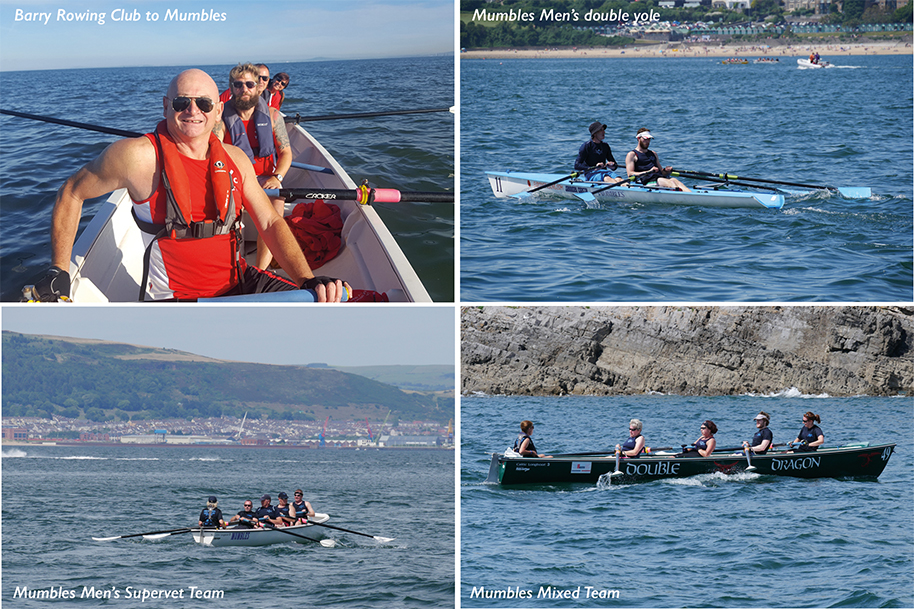 In late June, we hosted our own race ‘Mumbles Pwll Du Challenge’ an 17km row from Mumbles to Pwll Du and back. Many Welsh Sea Rowing clubs attended: Wisemans, Aberaeron, Barry, Towy and our newest club Gower Sea Rowers, along with friends and family supporters.

Remember me saying rowers can be a bit mad?.. well Barry Rowing Club decided that they would row to Mumbles, a 64km journey, setting off at 5.30am! Members of the club wanted to raise funds for a nine-month-old girl called Mali who was born with three holes in her heart. They were also raising funds for the Coastguard Association. They arrived in Mumbles at 9.30am, just in time for breakfast and a very warm welcome. Fantastic, heart-warming achievement Barry Rowers!

Mumbles teams were the fastest in the race with the Men’s Double Yole, Men’s Supervets and the Mixed Team ‘Double Dragon’ all winning 1st prize trophies in their categories. Everyone had a fabulous day racing with usual post-race celebrations of feasting and drinking with our Welsh Sea Rowing family. Huge thanks go to The Pilot Inn and J & S Products for sponsoring us, we really appreciate it!

We will be entering lots more League races around Wales but our next long distance races will be Dinas Head race (12km) and then later Ramsey Island (11km) in August.

On the 8th September we have two teams entering in The Great River Race. The Great River race is London’s River Marathon. A spectacular boat race up the River Thames, it attracts over 330 crews from all over the globe. This race appeals to every level of competitor. From dedicated athletes who like winning, to those who enjoy laughter, fancy dress and charity stunts. It attracts both the true racer and the leisure rower, and in developing ‘London’s River Marathon’, is doing for rowing what the ‘Road Marathon’ did for running. Not surprising when the course is a gruelling 21 miles from London’s Docklands to Richmond. We are really looking forward to it!

If you are bored with the gym and would like to try something new and challenging like sea rowing then please check out our website for more information: www.mumblesrowingclub.cymru